The Nvidia RTX 3090 has officially been confirmed as the first ever 8K-capable consumer graphics card.

Nvidia launched its new flagship graphics card alongside the RTX 3080 and RTX 3070, with the new generation of GPUs flaunting unrivalled performance power.

Here’s a quick rundown of the confirmed features and specs:

We will hopefully be getting the graphics card to review very soon, so stay tuned to Trusted Reviews for more information.

Nvidia GeForce RTX 3090 release date – When will it launch?

The RTX 3080 will hit stores in September too, but you’ll have to wait until October for the RTX 3070.

Nvidia GeForce RTX 3090 price – How much will it cost?

That’s incredibly expensive, but this is the very first 8K gaming GPU, so it comes as no surprise. 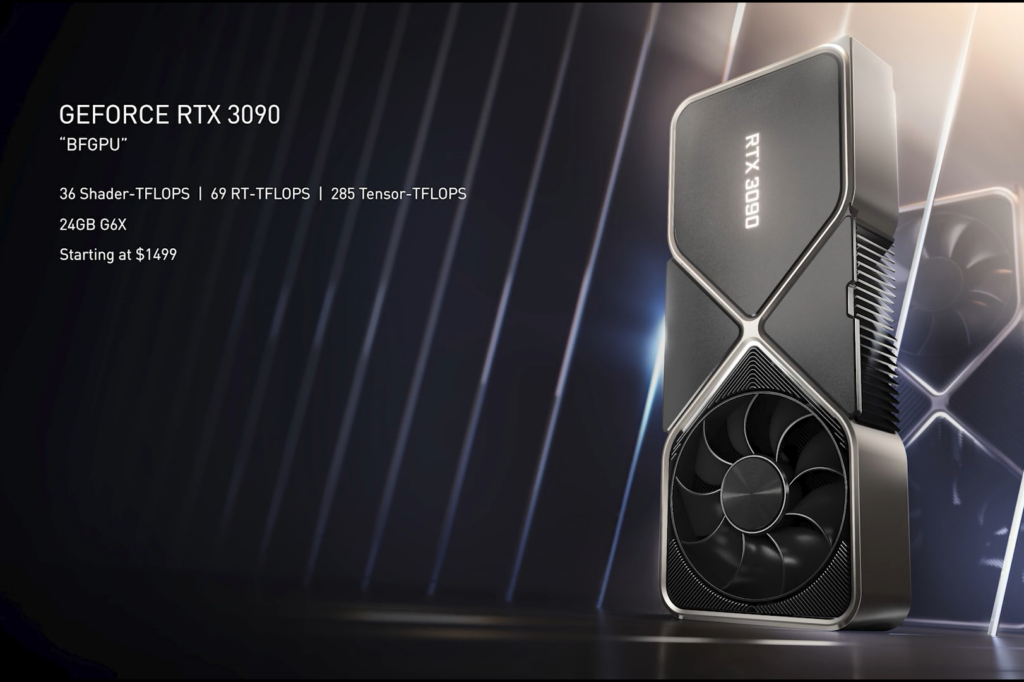 The RTX 3090 features the new Ampere architecture, which uses Samsung’s 8nm process. This means the node won’t be quite as compact as the upcoming AMD RDNA 2 architecture, but Nvidia is making up for that by pushing up the video memory to dizzying heights.

The next-gen graphics card is confirmed to feature Micron’s 24GB GDDR6X video memory. Micron suggests this amount of video memory ‘will be able to break the 1TB/s of system bandwidth barrier’, which is a big landmark for graphics cards since consumer options have never really come close to hitting that record.

The RTX 3090 is the world’s first 8K-capable gaming GPU. This incredibly powerful graphics card is apparently capable of hitting 60fps in 8K for “many top games”, and so should easily be able to handle 4K gaming too.

Nvidia claims it’s 50% more powerful than the Titan RTX, and yet is also 10x quieter thanks to a dual-axial, flow-through design.

We’ll have to wait until we get our hands on a review sample to determine whether these figures stand up, but the spec sheet sure does look impressive.