The AMD Radeon RX 6800 is a top-notch graphics card that delivers post 60fps gaming performance even in 4K. The only minor quibble is that, without a DLSS rival, ray tracing frame rates don't quite match the Nvidia competition.

The Radeon RX 6800 is AMD’s answer to Nvidia’s outstanding GeForce RTX 3070 graphics card, which is one of only a few tech pieces to achieve Trusted Reviews’ hallowed 5/5 rating.

The RX 6800 is currently the cheapest card on the market that’s built on AMD’s new RDNA 2 architecture. If that sounds familiar, it should – the PS5, Xbox Series X and Xbox Series S’ custom GPUs are all built using the same tech.

This makes it one of the first AMD cards to support ray tracing, a key feature that radically improves the presentation of light and reflections in games that had previously been limited to Nvidia’s line of RTX graphics cards.

With AMD quoting the card as offering “RTX 2080Ti / 3070” level performance, this makes it a seriously enticing prospect for any gamer looking to make the jump to 4K – especially considering the lack of 3070 stock at the moment. But, with AMD having oversold its graphics cards performance more than once in the past, you may justifiably be taking these claims with a pinch of salt.

However, having thoroughly put the RX 6800 through its paces, we can confirm AMD has well and truly put its money where its mouth is. Make no mistake, the RX 6800 is a fantastic GPU and the perfect choice for any gamer looking to make the jump to 4K. The only downside is that, with AMD yet to have an answer to DLSS,  ray tracing frame rates are occasionally an issue. 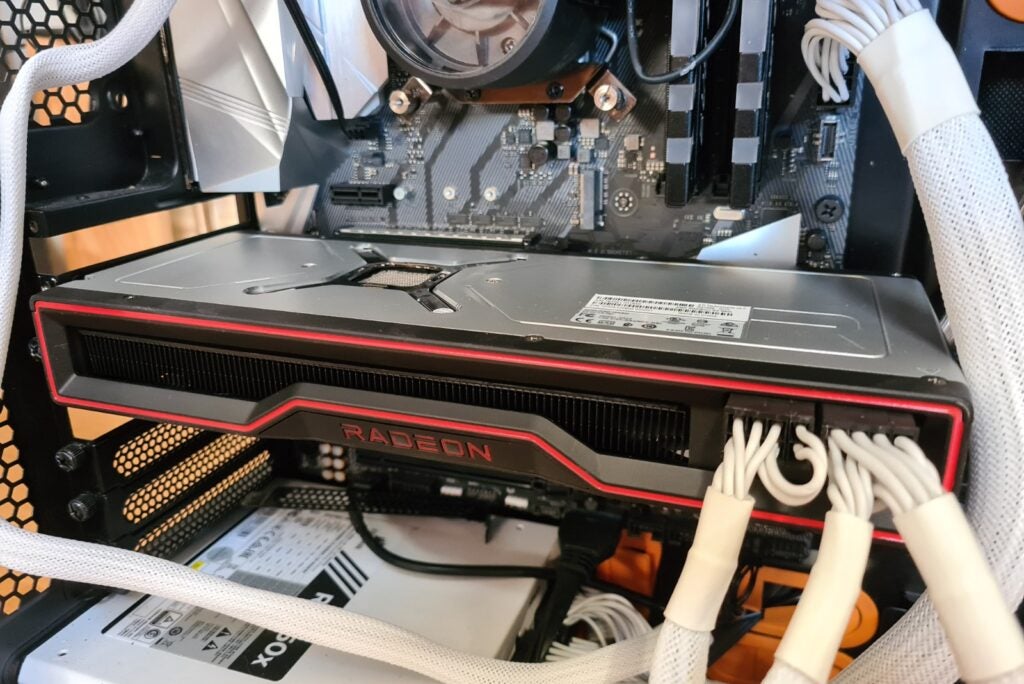 The card has a triple-fan design that makes it marginally larger than the RTX 3070, but it uses a basic 2x 8-pin PCIe connection instead of the custom pin system seen in Nvidia’s new cards, so there’s no need to worry about an adapter. Like most of 2020’s graphics cards, it’s more demanding than older units, with AMD recommending you power it with a 650W PSU minimum.

When it comes to raw specs it stacks up against the competition fairly well, coming with 60 compute units and a reasonable 1815MHz game frequency. This means it beats its main rival in this regard, although given the architectural differences between Ampere and RDNA 2 and how they handle different workloads, that isn’t the best metric to judge overall performance.

The only spec some gamers may sniff at is its use of 16GB of GDDR6 RAM. Nvidia’s latest RTX 3080 and RTX 3090 cards made the jump to GDDR6x which offers greater bandwidth, but is more expensive. However, considering the fact it’s yet to appear on the 3070 Nvidia card, this isn’t a deal breaker for the RX 6800.

You can see how the RX 6800 compares to its siblings and the Nvidia competition on core specs below.

All information in this table is based on the firms’ first-party cards.

However, the specs aren’t the most interesting bit about the RX line. It’s their RDNA 2 architecture. This is an incremental step for AMD and the first time any of its cards have supported DirectX Ultimate-level ray tracing.

The only downside is that ray tracing puts a serious performance drain on a GPU, and can half frame rate counts in some titles. It also needs to be manually added to a game by developers, which is a key reason that there are only a select number of titles that support the tech at the moment.

The good news is that AMD will support all ray tracing titles that use industry-based standards. This means the majority of ray tracing games that work on Nvidia RTX – such as Shadow of the Tomb Raider, Fortnite and Watchdogs Legion – are compatible with RX 6000 graphics cards. AMD claims there will be 10 games at launch to support ray tracing, with more being added to the list as time goes on.

However, games that make use of proprietary ray tracing APIs and extensions will not be supported, which includes the likes of Minecraft RTX and Quake II RTX. 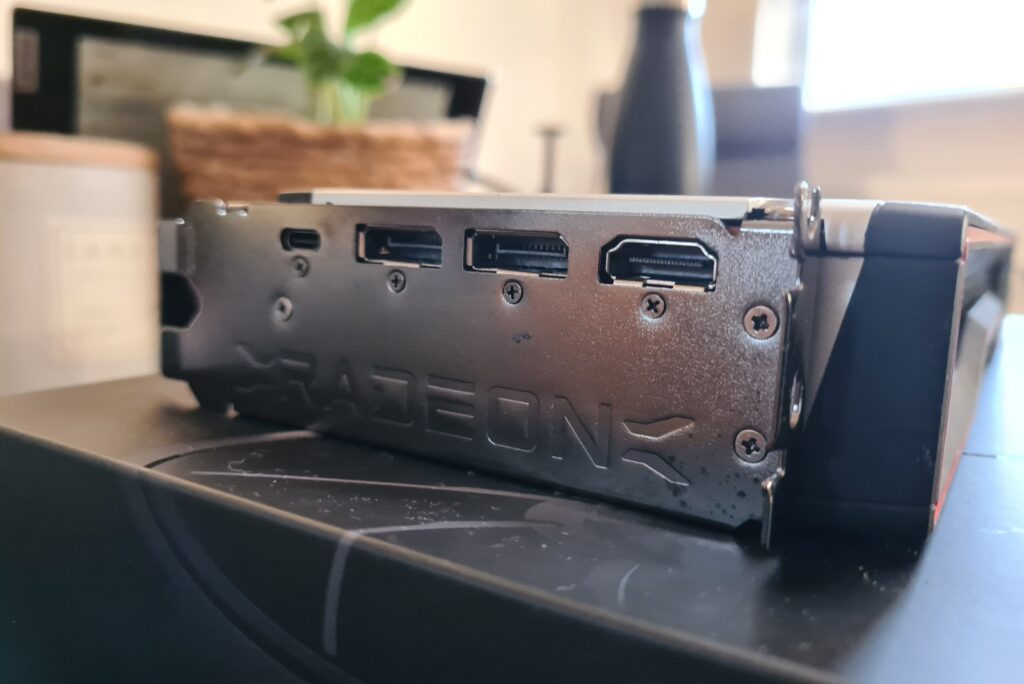 On the performance side things get a little more interesting. Nvidia attempts to get round the performance drain of real-time ray tracing by using its DLSS technology. This is a clever AI solution powered by the Nvidia card’s custom Tensor cores, which let the cards intelligently upscale content, thus improving frame rates.

As it stands, AMD doesn’t have an equivalent solution – although it has confirmed plans to release one next year.

Instead, AMD uses a custom solution that leverages “ray accelerators” and a mysterious new Infinity Cache functionality to keep things ticking while ray tracing. The card has a “ray accelerator” in each compute unit that handles the process on a bespoke basis.

Infinity Cache is a little harder to explain; AMD has been a little hazy about the details of how it works. But as I understand it, the tech aims to reduce the amount of heavy-lifting the card’s VRAM and ray accelerator does by storing more of the data required for ray tracing locally.

In layman’s terms, this means that Infinity Cache should lead to a huge increase in real-world performance-per-clock. AMD is specifically claiming the combination lets RDNA 2 offer a 50% performance-per-watt improvement across the board on the previous-generation GPUs.

For people looking to create a rig with one of AMD’s new Ryzen 5000 chips, the cards also feature a new Smart Access Memory.

Once again, AMD hasn’t disclosed the full details how the feature works, but it aims to further improve performance by synergising how the Ryzen CPUs and RX 6000 GPUs work together and communicate. This sounds a lot like the “resizable base access register (BAR)” feature Nvidia revealed it was working on for release later next year. Sadly, I couldn’t test the feature for this review as I didn’t have a 5000-series chip to hand. I’ll update this review with my findings when I can. 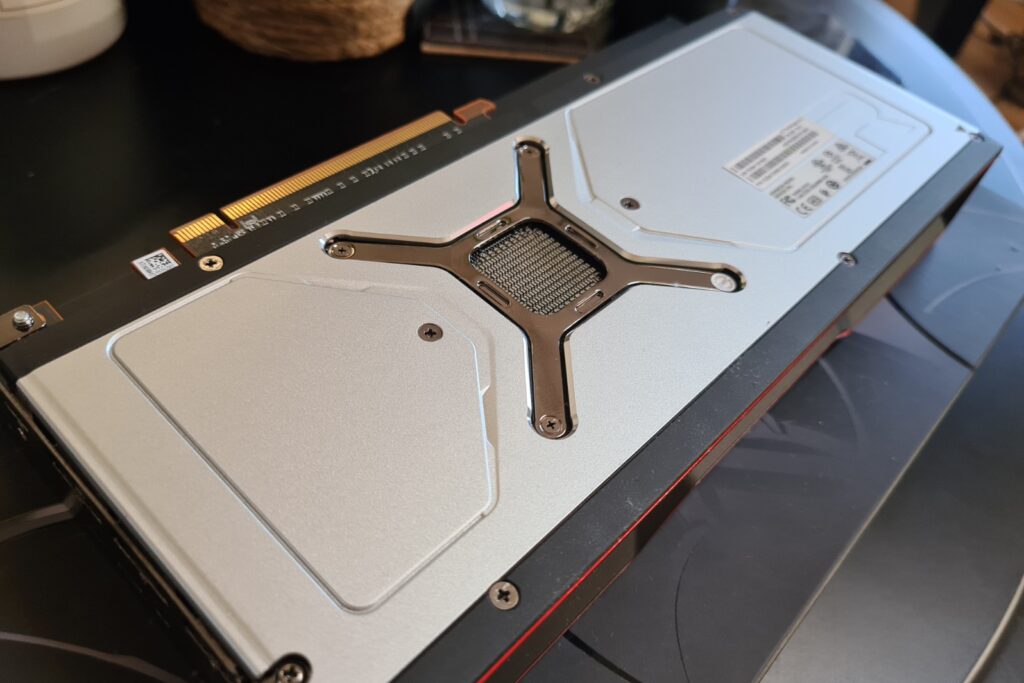 With the technical breakdown out of the way, we’re finally on to the meat of the review and answering the key question: just how fast is the AMD RX 6800?

To answer this we benchmarked the card using the same test rig upon which we tested the Nvidia RTX 3070 and RTX 3080. You can see a breakdown of its specs below.

Every game was benchmarked with its graphical settings maxed out. 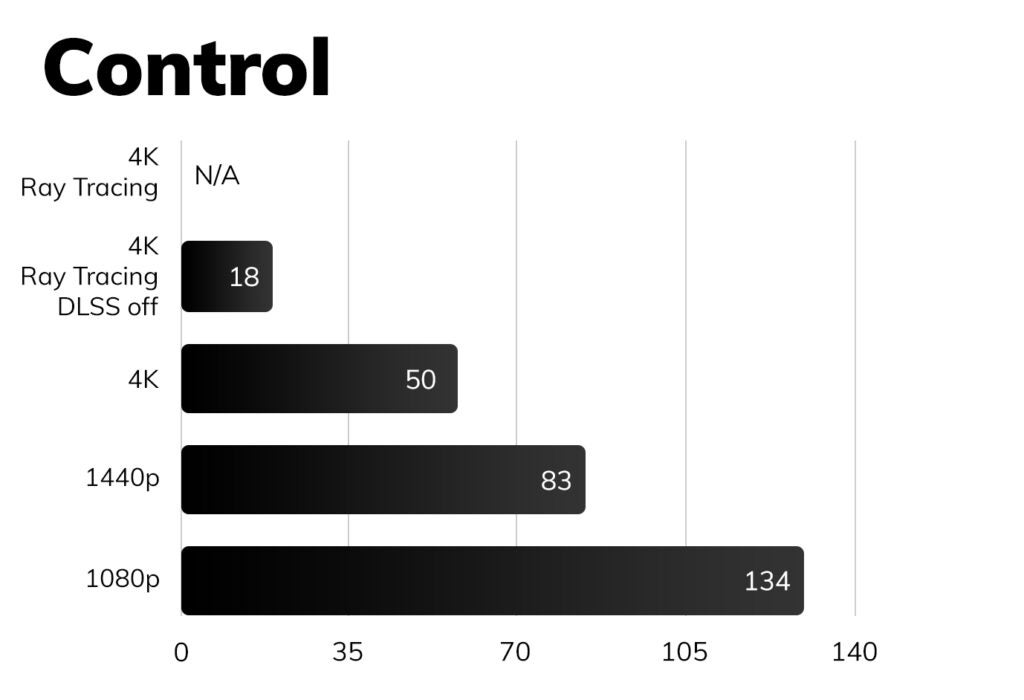 Control is considered one of the best examples of ray tracing on Nvidia’s RTX line of cards. It’s a demanding title, brimming with reflective surfaces, advanced physics and complex lighting effects. It doesn’t have a built-in benchmark, so we tested performance by taking the average frame rate running through a busy office section of the game that featured plenty of reflective surfaces.

Here, the lack of DLSS really showed itself, with the RX 6800 struggling to get past 30fps in the game’s top graphical settings. This, in part, is also because the card isn’t optimised for the game and doesn’t cap the “rendering” resolution in the way Nvidia cards do. Nevertheless, it’s a useful metric for how the card will handle ray tracing titles optimised for Nvidia. 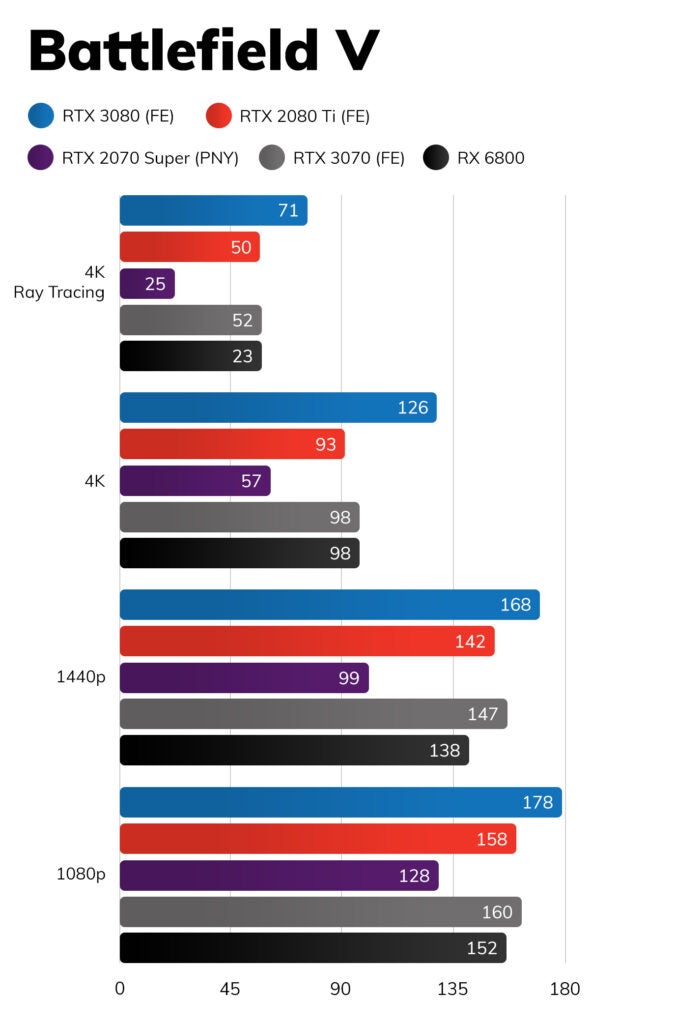 Battlefield V is a great title to see how a GPU will handle epic, large-scale multiplayer games. It’s a huge game full of various particle effects, and AI and human characters moving through huge sprawling maps.

Like Control, it doesn’t have a built-in benchmark so we evaluated performance by taking an average frame rate count playing through a section of the Nordlys War Story.

Here, again, the lack of a DLSS-like solution and Nvidia’s lead developing ray tracing-ready cards was evident, with the RX 6800 offering lower performance than its RTX rivals across the board with ray tracing turned on – although, to be fair, outside of 4K FPS counts remained playable.

With ray tracing off, performance was astoundingly good with the RX6800 going toe-to-toe with the RTX 3070. 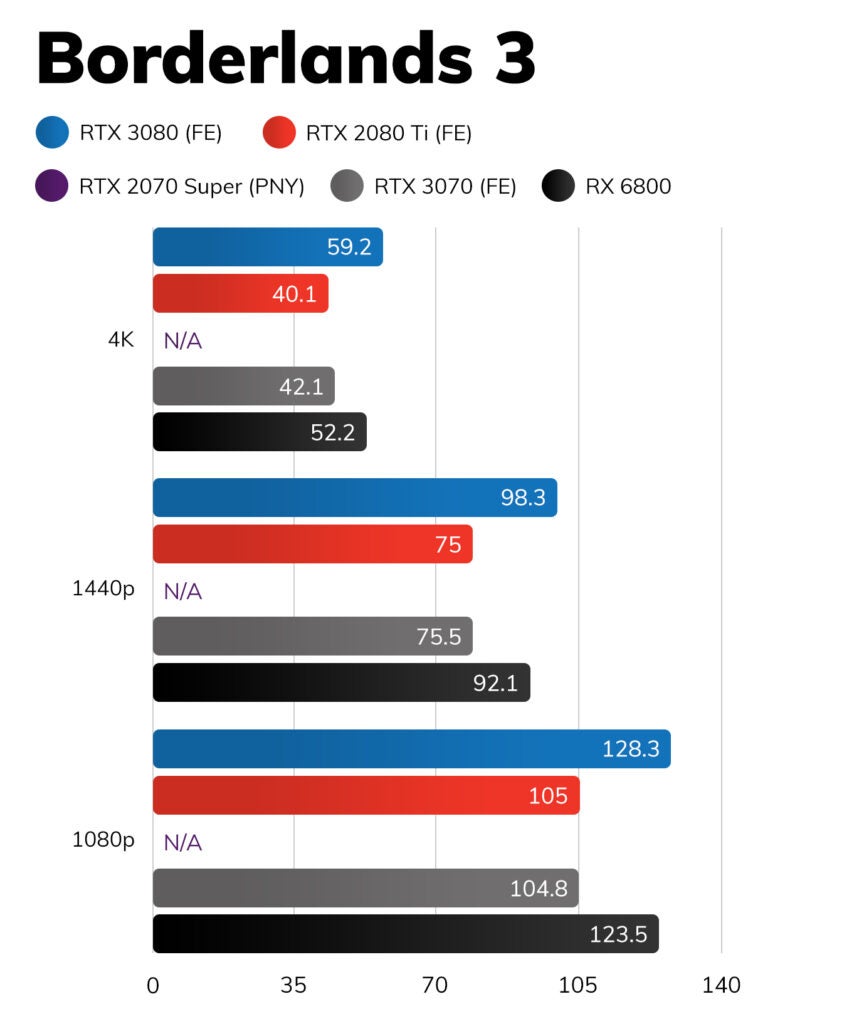 Borderlands 3 is a notoriously demanding game that really taxes a PC’s CPU and GPU. It’s a giant open-world shooter full of advanced particle effects, human and AI-controlled characters and vehicles. The game features its own internal benchmark that acts as a great stress test for any gaming PC.

Here, the RX 6800 once again delivered, offering equivalent performance to its arch-rival the RTX 3070 and the previous-generation RTX 2080 Ti mentioned in AMD’s pre-launch marketing materials. This is a serious achievement considering the 2080 Ti cost over £1000 when it originally launched. 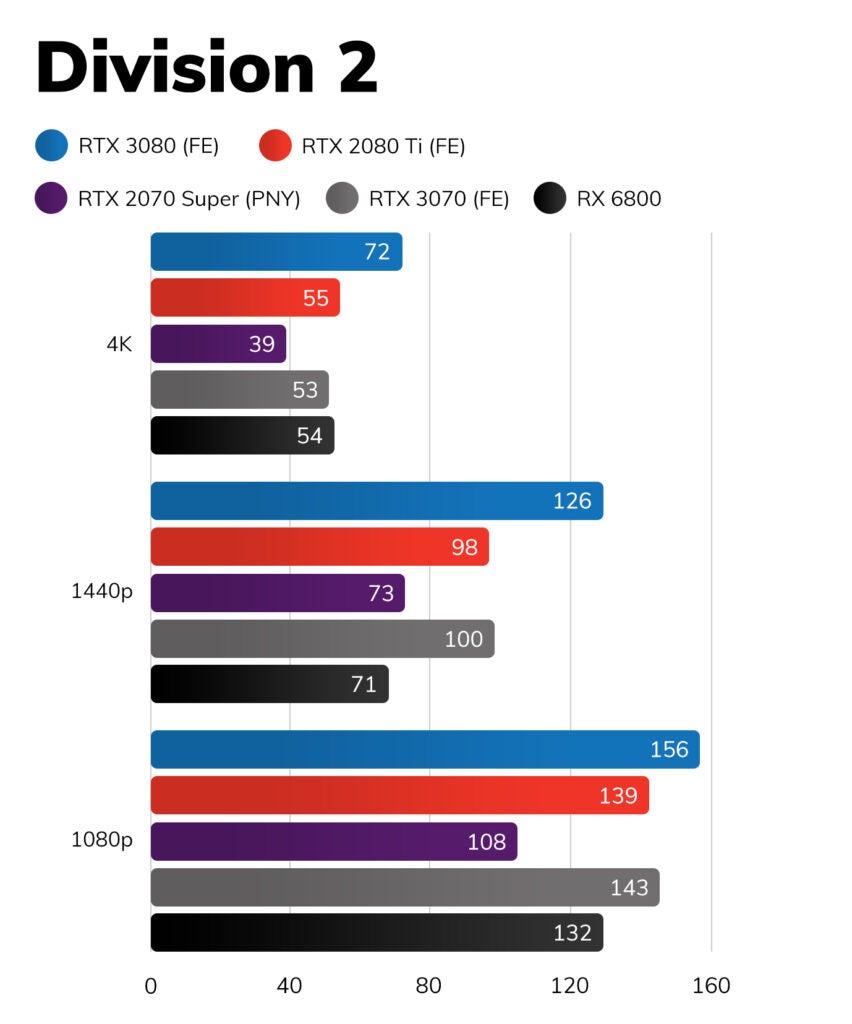 The Division 2 is a giant multiplayer shooter. It’s a great metric to gauge how a GPU will handle big platform games such as Destiny and their ilk.

It has an internal benchmark that tasks the GPU to render huge gunfights and numerous explosions featuring advanced physics. Here, the RX 6800 lived up to AMD’s pre-release performance claims, matching the RTX 2080 Ti and 3070 for the most part. 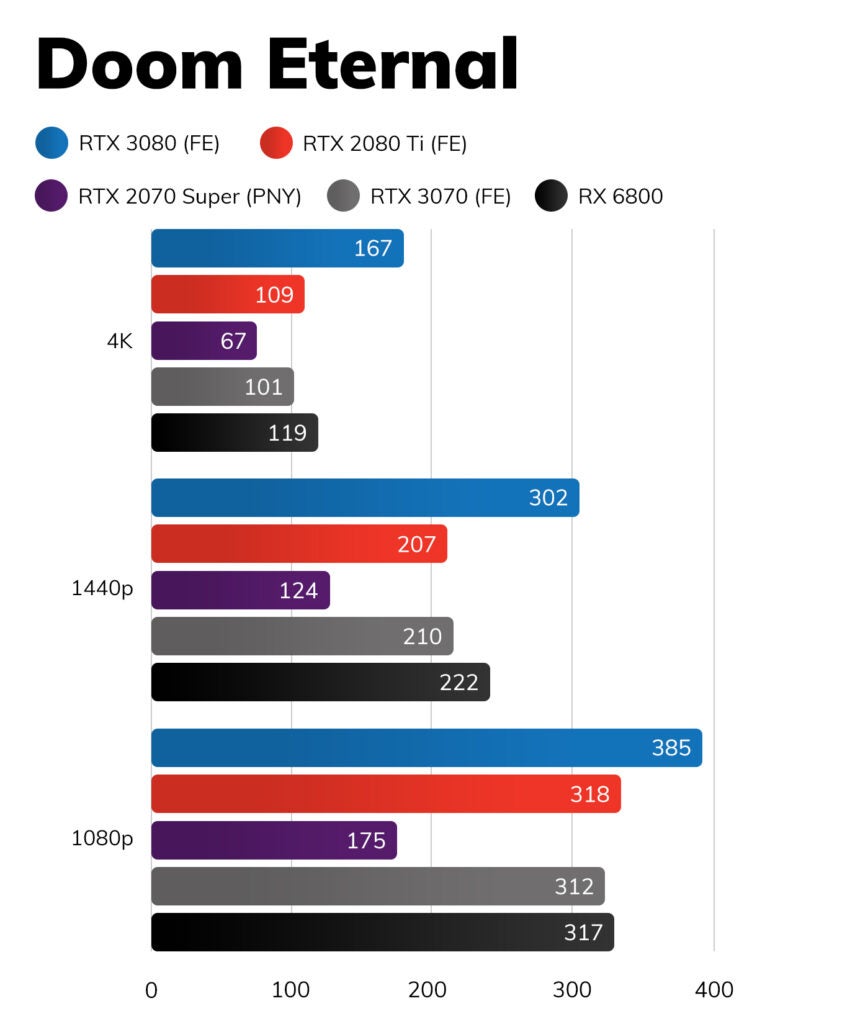 Doom Eternal is a pristine example of how to make a well-optimised game. Running on the Vulkan API, it’s blissfully well optimised and has surprisingly low system requirements, despite being outright gorgeous.

The game doesn’t have an internal benchmark so we took an average FPS count running through the opening section of the game’s first mission. As you can see in the table above, the RX 6800 delivered post-100fps rates across the board. 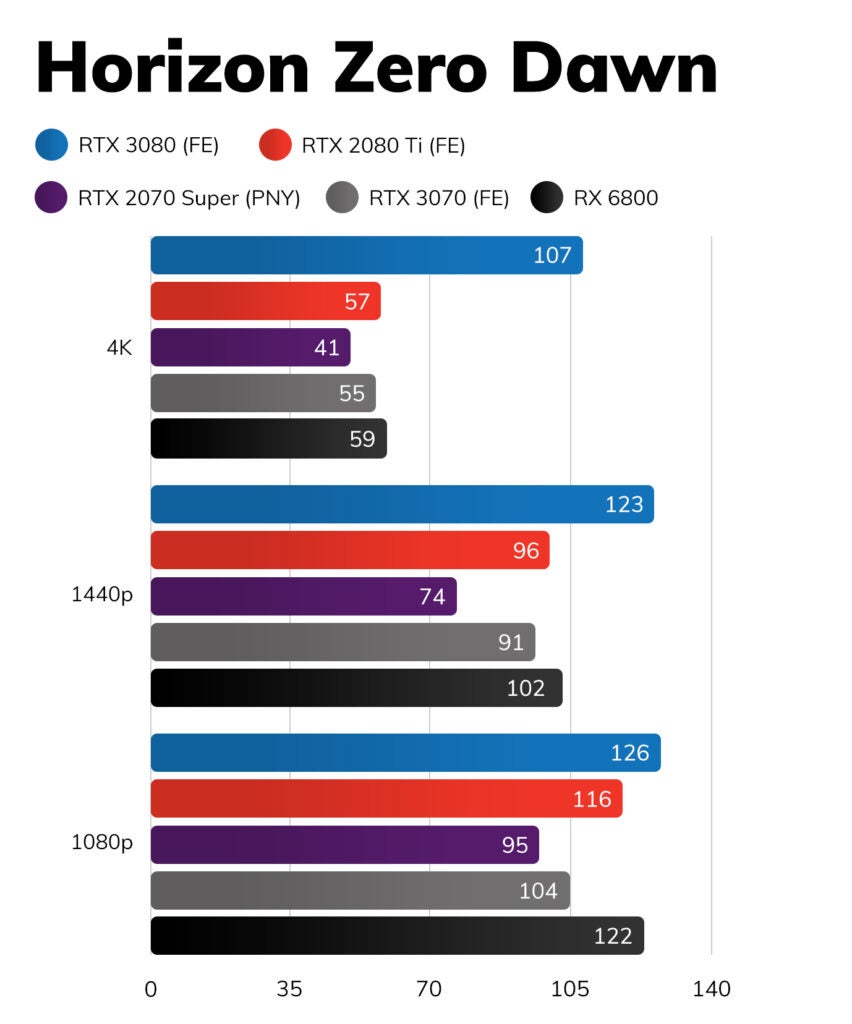 Horizon Zero Dawn is a beautiful, but a horribly optimised game that started life as a PS4 exclusive. It’s internal benchmark is a good metric to determine how well a GPU will run super-demanding titles. Here, the RX 6800 performed exceptionally well, offering post-60fps scores in everything but 4K. 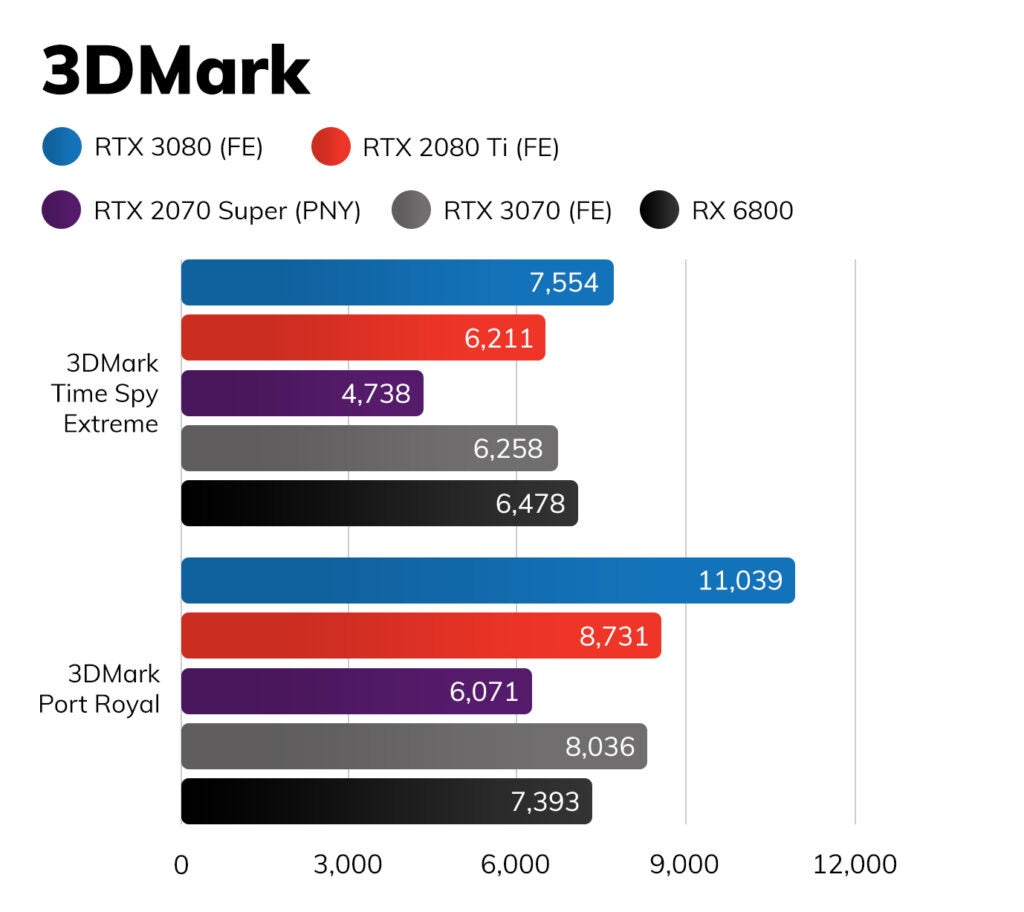 3DMark is a synthetic benchmark that offers a general gauge of a GPUs gaming performance as a numerical figure. A higher score is better.

The card matched the 3070 in Time Spy Extreme, but it lagged slightly behind in Port Royal, but not to the point it suggested any serious performance issues. 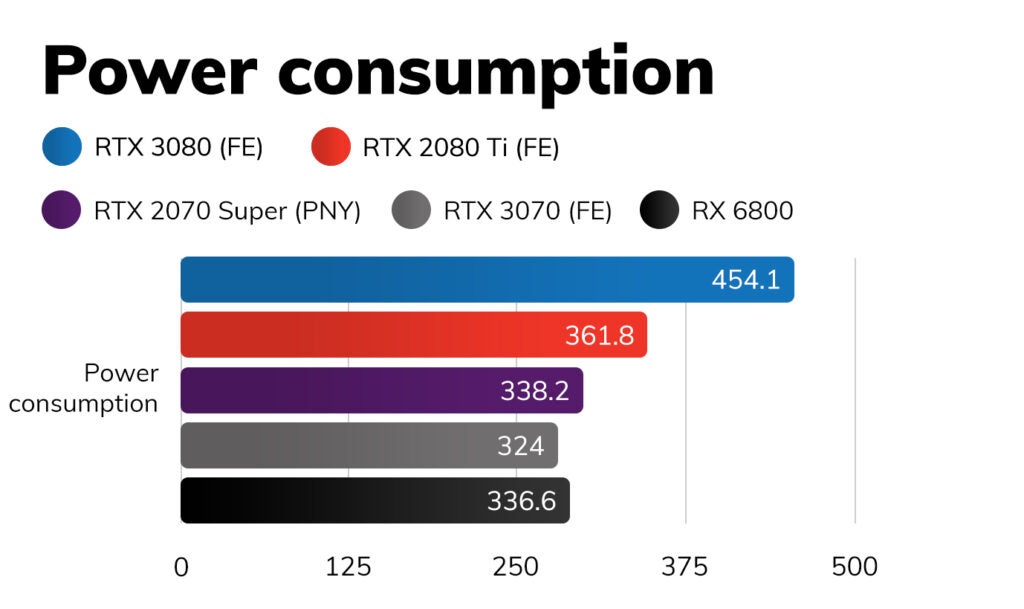 I detected a 336.6w peak system power draw while running Time Spy Extreme on the RX 6800, which makes it a little more demanding than the RTX 3070, which itself is a bit of a beast.

However, it made up for this by offering slightly more wiggle room with overclocking. Running a rough and ready OC, I was able to overclock the card’s clock speed to 2480MHz, marking a 12% improvement on base speeds. Interestingly, I was only able to boost the memory speeds by 1-2%, although this is likely down to pre-release drivers. I’ll update this review once I’ve taken a second stab with the final consumer release.

The RX 6800 card also runs fairly hot. Stress testing the unit in Time Spy Extreme, the RX 6800 ran at an average of 85ºC. AMD claims that this isn’t an issue as a result of the card’s thermal design, and it focus on checking maximum temperatures using its “junction” rather than traditional die temperature monitoring. Junction temperature is an alternative way to measure and manage heat developed; it reportedly lets the card operate at a safe maximum temperature of 110ºC.