What is the AMD Radeon R9 Fury Nano?

Cramming a powerful core inside a tiny chassis isn’t easy or cheap. I’m intrigued to see how the Fury Nano stacks up against traditional high-end cards, and if it can possibly be worth its £600 price. 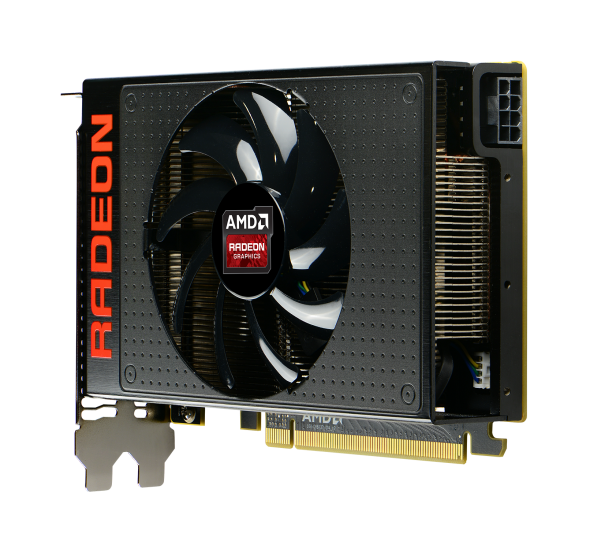 The Fury Nano is AMD’s first attempt at placing such a powerful core inside a tiny package. It seems an odd move, but when you consider what’s currently going on in the PC market, it makes sense.

Over the past few years, graphics cores and other components have seen an boost in efficiency. So while this has led to improved performance, power consumption and heat output levels have plateaued, or begun to decline.

Such trends have had a significant impact on graphics cards and the wider PC market. In the graphics sphere, it’s given companies such as AMD the opportunity to experiment with smaller and more innovative designs, since there’s less need for flagship cards to feature huge heatsinks and a multitude of fans. In the world of PCs, mini-ITX and micro-ATX systems are becoming more popular options for high-end rigs.

AMD has made the Nano only 6in long – about the length of its PCI-Express x16 slot – and crammed inside the Fiji core that powered the water-cooled, range-topping Fury X. That’s quite an achievement. 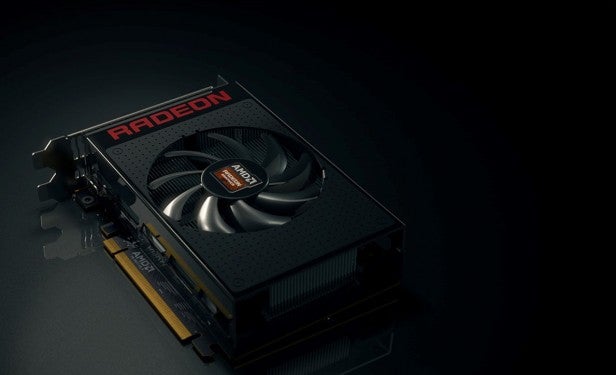 AMD has jumped through several hoops in order to build this card. For starters, it’s picked Fiji cores that consume only the lowest rates of power, and this version of Fiji is accompanied by four VRM phases rather than the six included in the Fury X – a decision taken to help manage Fiji’s lofty power requirements.

The core still uses 4,096 stream processors and 8.9 billion transistors, but it’s been cut back to about 900MHz – 150MHz lower than the Fury X. The reductions in clock and VRM, and AMD’s choice of power-efficient Fiji cores, means that the Fury Nano has a power limit of 175W. That’s key to producing such a small card, since it’s 100W less than the Fury X.

All of AMD’s Fury-branded cards deploy High Bandwidth Memory, rather than the more common GDDR5. The HBM chips have a far wider interface than GDDR5, meaning more data can be processed despite the chips running at far lower speeds. On paper the 500MHz for memory is poor, but the 4,096-bit interface is eight times as wide as previous flagships. The Fury Nano has 4GB of memory, which is half as much as Nvidia’s cards manage – but those chips use older GDDR5.

The Nano is chilled by a hybrid air and vapour-chamber cooler topped with a single fan, and is powered by a single 8-pin connector. It’s a reference-only design, and comes with one HDMI output and trio of DisplayPort connectors. There’s no DVI, however.

The Nano isn’t the only card available in such a svelte form factor. Nvidia’s GeForce GTX 970 is the most powerful small card on the other side of the fence, and there are plenty more modest GPUs available at this size. However, AMD’s card will be the most powerful – and that means it’s also going to be the most expensive. The Nano costs a mighty £600, which is around twice as much as a compact GTX 970. 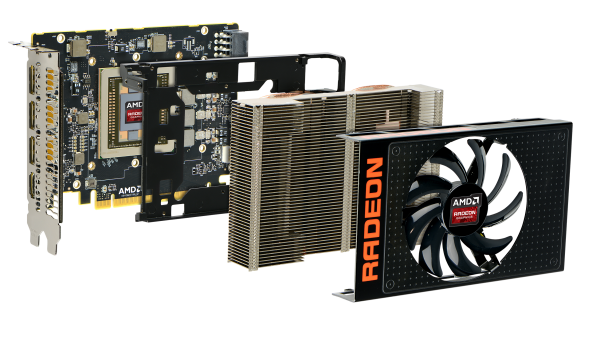 Synthetic benchmarks are an effective indicator of GPU performance, and here the Nano performs well. Its 1080p 3DMark result of 12,284 is superb: better than Nvidia’s GTX 980 and AMD’s own standard Fury, and only behind the GTX 980 Ti and Radeon R9 Fury X.

The Nano’s position just behind this generation’s flagship cards was emphasised elsewhere. Its Unigine 1440p pace of 39.5fps is better than the 35.8fps scored by the GTX 980 and is only one frame behind the standard Fury card. The Fury X sits a little higher at 42.7fps, and the GTX 980 Ti is top of the heap, with a result of 51fps.

The Nano is powerful enough to bat 1080p benchmarks to the side. The Nano’s poorest result at this modest resolution was an average of 85fps in Battlefield 4, and its best score was recorded in Tomb Raider, where it topped out at a mighty 173fps.

At 1440p the Nano begins to flex its miniaturised muscles. It was playable in every game I tested at this resolution: its slowest averages came in Crysis 3 and Battlefield 4, but it still managed a rapid 59fps in those games, and it peaked with a score of 131fps in Tomb Raider.

Real-world games tests see the card fall into a familiar position: comfortably ahead of the GTX 980 and occasionally able to match the standard R9 Fury. It’s unable to compete with the pace on offer by the GTX 980 Ti and Radeon R9 Fury X. 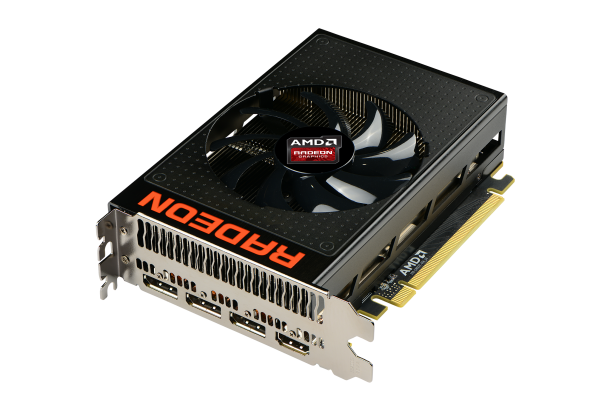 This was repeated in games at 1440p too. Here, the Nano was able to beat the GTX 980 in almost every game, but it was usually behind the pricier Nvidia card and both larger AMD Fury chips. That’s good for putting the Nano in context, but it’s not like the Fiji core used for this card is going to struggle at 1440p thanks to its excellent averages in every test.

The higher resolution of 3,840 x 2,160 is a tall order for most GPUs – but even here the Nano proved capable. It managed averages beyond the key 30fps figure in all but one game, with only Crysis 3 proving difficult – and here the Radeon still managed a decent 28fps. Its minimum frame rates are a little lower, but even then it returned reasonable scores in most titles.

The Nano’s position in the GPU hierarchy didn’t change at this higher resolution. It was faster than the GTX 980 in every game, with gaps of around 5fps in most titles – only in Grand Theft Auto V did the Nano’s 47fps average fall closer to the 45fps result of the GTX 980.

It couldn’t catch the other cards at 4K, though. It was often within a couple of frames of the standard R9 Fury, but gaps between the Nano and the GTX 980 Ti and Fury X were wider. In BioShock, the Nano’s 46fps lagged behind the GTX 980 Ti’s 55fps and the Fury X’s 53fps, and its 42fps average in Middle Earth: Shadow of Mordor was six frames behind AMD’s flagship Fury X.

The Nano’s stricter power limits meant my test rig was more frugal than with any previous Fury card. At its peak, my Nano-powered machine drew 294W from the mains, which compares favourably to the 351W draw from the Fury and the 369W of the Fury X. It’s less than my machine required with a GTX 980 Ti inside, but it wasn’t able to beat the 273W power draw of the standard GTX 980.

The tiny Fury card managed to regulate its temperature well, despite its small dimensions. The Nano’s top temperature of 75°C is a little higher than the Fury X’s peak heat level, but it’s nothing to worry about – it’s even a few degrees cooler than both Nvidia cards. The reasonable power and noise levels are especially pleasing, because the Nano’s reference design won’t be modified by any board partners. 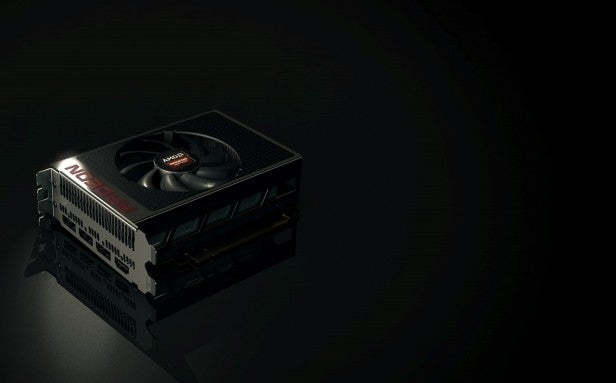 The noise levels are trickier to judge. The single fan is extremely quiet, but the issue comes from an unexpected source – the Nano’s capacitors.

The smaller size of the Nano means AMD has had to pack smaller capacitors into a tighter space, and that means the coils inside the capacitors vibrate at a higher frequency during gameplay. The capacitors produce a louder whine when tougher games are run but, mercifully, the noise does die down when the card’s workload is reduced.

AMD has recognised the issue, and concedes that nothing can be done – the whining from the coils is just something that happens with a card such as the Nano. It’s no worse than the noise produced from high-end cards with numerous fans, but it’s just higher-pitched. Headphones, speakers or noise-dampening features on a case will make it more bearable.

The Nano is expensive, but much of the price is clearly a reflection of the unprecedented performance on offer in such a tiny space. Although this is impressive, is it worth spending £600 on a card such as this to play games on a single screen?

There are far cheaper alternatives for 1080p and 1440p gaming. On the AMD side of the fence sit models such as the Radeon R9 380, which offers a compact design for less than £200. Nvidia’s board partners offer the GTX 970 and GTX 960 in smaller versions for less than £300 and £200 respectively.

Also note that AMD’s reference design for the Nano can’t be modified, so the chip won’t be available with different coolers or overclocks.

AMD’s latest card is one of its most outlandish and impressive. It’s the first time I’ve seen true high-end power inside a card that’s small enough to comfortably fit inside a mini-ITX chassis – and it achieves this without becoming too hot or loud.

Its performance levels are consistently impressive. It can play anything at 1080p and 1440p, and most games at 4K. Plus, it isn’t far behind AMD’s full-sized flagships – which isn’t surprising given its shared Fiji core.

There are both literal and figurative prices to be paid for such barnstorming technology. The £600 price puts it in line with cards such as the GTX 980 Ti and Radeon R9 Fury X, but the slimmed-down Nano just can’t compete with those chips in our benchmarks. There are numerous cheaper alternatives: a card such as the GTX 980 is never far behind in benchmarks, but it costs around £200 less.

All this means the innovative Nano will sit at the top of the market as a luxury, niche product for those with small-form-factor rigs who don’t want to compromise on performance. I expect to see smaller graphics cards continue to push the performance envelope – but right now, this is as much a proof of concept as a viable product.

Delve into our round-up of the best gaming headsets if you want to drown out that capacitor noise – or explore 2015’s best PC games if you want something to really stretch your new graphics card.