What is the AMD Radeon R9 Fury X?

AMD has been quiet in the graphics market of late, which has allowed Nvidia to race ahead with its GeForce GTX Titan X and GTX 980 Ti. Now we can reveal the reason behind the hush: the Radeon R9 Fury X has arrived.

It’s
the first new GPU from AMD for more than a year. It’s been designed using
familiar architecture, but virtually every component has been
turbo-charged – and to cope with the changes, AMD has ditched the
traditional air cooler in favour of a water-based unit. 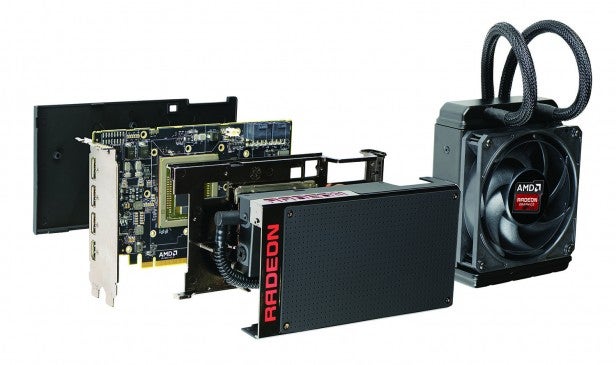 The R9 Fury X  uses a brand-new GPU dubbed Fiji, but it’s based on the
Graphics Core Next architecture that’s been inside AMD chips since 2011.
The numbers have grown in virtually every department, but the structure
remains the same: a single Graphics Command Processor delegates tasks
to four shader engines, each of which is crammed with 16 compute units.

That’s a big
difference from AMD’s previous flagship – and the Fury’s current
competition. The R9 290X and Nvidia GeForce GTX 980 Ti both make do with
2,816 stream processors, and the AMD card used only 11 compute units in
each Shader Engine, rather than 16.

Some of the more minor
parts of the GPU remain the same. Each shader engine still has its own
texture unit and rasteriser, and the core continues to be built using a 28nm
process. 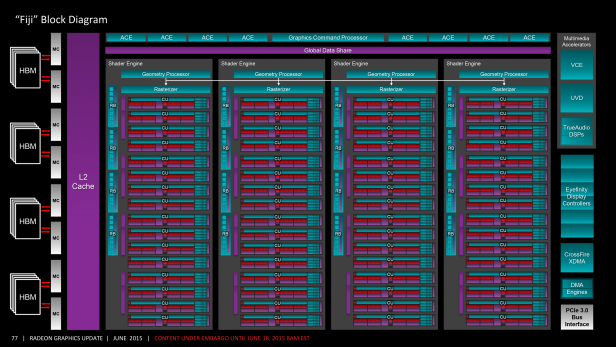 The
Fury X’s impressive start continues with its bandwidth figures. Its single-precision performance of 8,601 GFLOPs trounces the GTX 980
Ti’s 5,632, and that pattern is repeated in the
double-precision and memory-bandwidth calculations – the Fury’s 512GB/sec
memory bandwidth easily beat the GTX 980 Ti’s 336GB/sec.

That big
jump in memory performance is down to AMD’s new memory system. The
familiar GDDR5 memory has been replaced by High Bandwidth Memory, or
HBM. The new technology has been developed to use a far wider interface
than previous cards: GDDR5-based chips use 512-bit interfaces at their
peak, but the 4GB of HBM memory inside the Fury X is accessed using a
mighty 4,096-bit bus.

The new memory stacks chips vertically as
well as horizontally, but it currently tops out with four 1GB stacks,
and speeds are lower. On paper, the Fury X’s memory clock of 500MHz is far
slower than any other high-end GPU. Despite that, the wider
bus and higher bandwidth leaves AMD confident.

Innovation isn’t
limited to the inside of the card, either, as the cooling gear attests.
The Cooler Master unit has smart braided cables and a single 120mm fan. In addition, it’s modestly sized. Not much taller or wider than the fan
itself, it’s comparable to the smaller pre-made
water-coolers now commonly used to chill processors.

You’ll
need a 120mm fan mount to use the cooler, but that shouldn’t be tricky
to find in large, enthusiast-level cases – and it could even be used in
small-form-factor cases, depending on how you choose to chill the CPU. 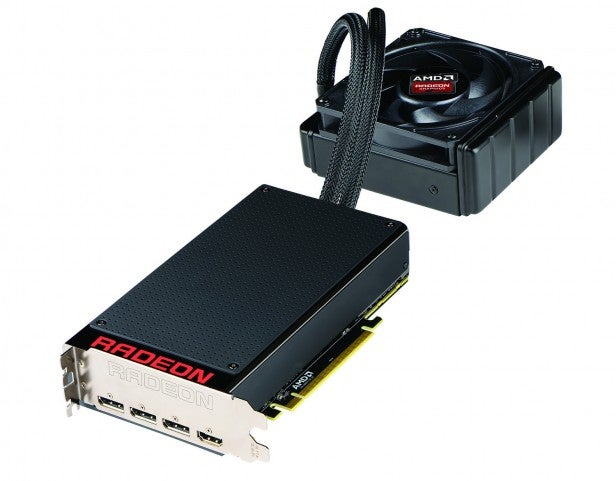 The
separation of the cooling gear and the reduction in room required by HBM
memory means the card has shrunk. Its PCB is just 195mm long, which is
much smaller than most high-end GPUs – the GTX 980 Ti and R9 290X
reference designs are 267mm and 278mm long.

The liquid cooling
isn’t the Fury’s only neat physical feature. Eight LEDs that sit beside the two
eight-pin power connectors indicate the GPU load, and can be switched
between red or blue; one green light flashes when ZeroCore mode has
shut down the GPU when the PC is idle. There’s also a
dual-BIOS switch, so you can store two concurrent profiles.

The
reference model is the only design available, so it’s important to
examine its display outputs. It has three DisplayPort connectors and a
single HDMI port, but it’s HDMI 1.4 – and that could pose a
problem. The GTX 980 Ti includes HDMI 2, meaning Nvidia’s card
supports 4K at 60fps, 32-channel audio across four audio streams and the
21:9 aspect ratio. There’s no DVI, either.

The Fury X supports
every API we expect, including DirectX 12, Vulcan and Mantle. Plus, AMD’s
FreeSync feature now handles 30Hz screens, so games can use it while
running at 30fps – ten frames lower than before. The Fury X works
with CrossFire XDMA, so dual-graphics functions over PCI rather than
using a separate physical bridge. 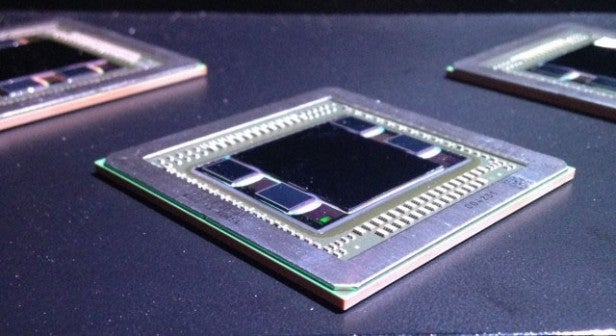 For
full in-depth analysis of our test data, along with a full compliment
of results and explanation of our testing procedure, click through to the
second page of this review.

In simple terms, however, the AMD Radeon R9 Fury X absolutely blasts
through games at a 1080p resolution. In four of our games it averaged more than 100fps, while its worst result was 91fps in Battlefield 4.

It’s
at 1440p that the Fury X is presented with more of a challenge. At this
resolution we saw results of between 45fps and 125fps, with the likes of
Battlefield 4 hitting 64fps and Shadow of Mordor trotting along at
84fps.

These figures clearly show that this is a card well suited to
that resolution, although the Nvidia GTX 980 Ti is comfortably the faster
card. In Battlefield 4, it was a clear 10fps faster; in Batman
Arkham, it was 24fps faster – although with both cards delivering well over
100fps, it’s perhaps a moot point.

Moving up to a 4K
resolution and both cards start to become more seriously taxed, although still delivering over 30fps, with many games hitting
60fps and up. Take note, too, that we’re testing at very high detail settings. 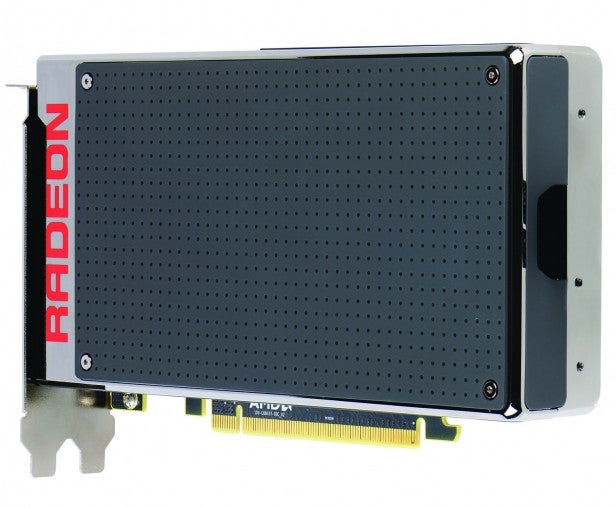 In
terms of how the two fared against each other, it was a more even
split, with the memory bandwidth of the AMD card helping at this
high resolution. As a result, the GTX 980 Ti held a 3fps lead in
Battelfield 4 (37fps to 34fps) and 8fps in Batman Arkham (82fps to 74fps).

The Fury X closed the gap to a
couple of frames in BioShock, however, and then finally overhauled the GTX 980
Ti in Crysis 3: an average of 32fps outpaced the GTX 980 Ti by
two frames. The AMD card extended its lead in Metro, where its 33fps
minimum and 45fps average were eight and three frames ahead
respectively.

Our final games test, Shadow of Mordor, saw the
Fury X triumph with an average of 48fps – only one frame ahead of the
GTX 980 Ti.

The
Fury X proved a little more competitive in our theoretical tests too. Its
3DMark Fire Strike Ultra result of 3,943 was a few points ahead of the
GTX 980 Ti, and it was just two frames behind in Unigine’s 4K benchmark.

AMD’s card traded blows with Nvidia elsewhere. The water-cooling gear
helped the Fury X deliver a top temperature of just 65°C, which is 17
degrees cooler than the GTX 980 Ti. The water-cooling unit helped to keep the
noise down too; the card is no louder than traditionally cooled high-end cards.

The Fury X is
unusual in that this new card isn’t being modified by board partners. At the moment – and, perhaps, for good – the reference design is the only
one available, which means there aren’t any overclocked versions out there.

On the plus side, however, it means there’s less homework to do when
picking a card. Aside from being made by different board partners, they’re identical, and they come in at similar prices.

While there’s less scope of picking a card that’ll suit the aesthetic of
your rig, in one department at least AMD is catering to modders.
It’s released the design for the front plate of the card so that enthusiasts
can replace the aluminium plate with their own creations, although in a
traditional PC this will face downwards, so we’re not sure how many
people will go down this route.

The Fury X is an
impressive return to form. AMD has improved its architecture by adding
more grunt and debuting innovative memory, and it keeps the chip chilled
with an effective, envelope-pushing water-cooled unit that helps cut
down the size of the main card.

Performance is rapid across the
board, with enough power to run games smoothly at 1440p and 4K. Part of
the credit must go to AMD’s HBM memory, which serves up more bandwidth
despite having a relatively modest amount installed.

When
compared to Nvidia’s GTX 980 Ti, though, the picture becomes a little murky. It’s a
draw between the Fury and Nvidia’s GTX 980 Ti at 4K, but the Fury loses
out at 1440p and in most of the theoretical tests. AMD’s hardware also
suffers from an absence of overclocked cards and higher power
consumption.

It’s because of this that the Fury X can’t
quite overhaul the competition. It’s a big improvement over the last
generation, but it’s not quite good enough to establish a lead over
Nvidia. The Fury X is a viable 4K option, especially if you want a
smaller card, but the GTX 980 Ti just about wins thanks to its better
1440p performance and added versatility.

Just invested in a new graphics card but don’t know what to play? No problem: we’ve got round-ups of the best FPS games you can get right now and 2015’s greatest RPGs.

Next
Benchmarks and Analysis Review