Acer´s new Aspire S3 is the first in what its manufacturer  claims will be a long running series of Ultrabooks. What is an Ultrabook? It´s a slim and light laptop with more power, and a larger screen, than a netbook.

The Acer Aspire S3´s main attraction is, just like its inescapable rival the Apple Macbook Air, its body. Like a beautiful model with a secret degree under her belt, any killer components are always going to be overshadowed by that look. But what a look it is. 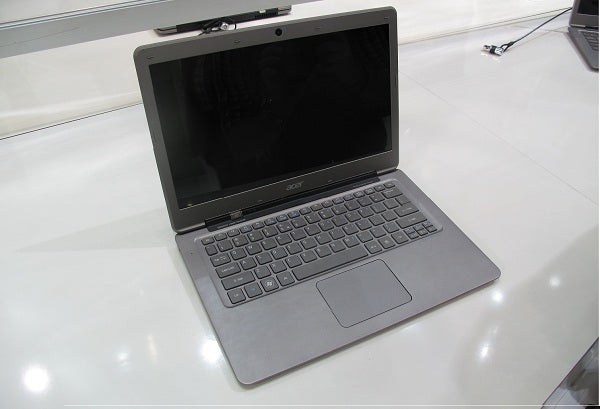 The S3´s chassis is made of a magnesium and aluminium alloy, providing the premium feel of metal construction without adding too much weight. At a shade under 1.4kg, this 13.3in screened device isn´t much heavier than a plastic-bodied 10.1in netbook.

It feels perilously light in-hand too. It doesn´t quite have the solidity of the new Macbook Air, largely because it doesn´t have a unibody design, instead allowing some seams to show. In the trade-off we also get to wave goodbye to the Air´s dangerously sharp edges and scary price tag. Where the entry-level 13in Air costs £1099, Acer´s alternative will be available from 799 Euro – which naturally means we´ll probably end up paying the same figure in pounds.

Acer hasn´t revealed the exact specs the UK models will feature, but all offer an SSD – up to 240GB – with hard drives up to 500GB available as an optional extra. The full roster of current-gen Sandy Bridge processors will be on the list too, i3, i5 and i7, but bear in mind they are the low voltage editions designed with maximising battery life in mind. 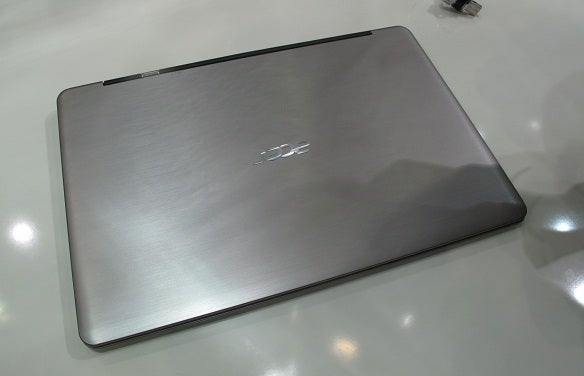 Although the inside of the S3 features the anodized finish similar to Apple´s aluminium-bodied laptops, the lid has a shinier brushed finish. It´s all very swish, only disturbed by the dark plastic strip that forms part of the laptop´s hinge. You can´t have everything though, and there´s no denying this is a good-looking laptop.

Connectivity naturally suffers in squishing down the Aspire S3´s frame – it´s 13mm at its slim front part, bulking up to a still-svelte 17mm at the back – but the basics are covered. There are two USB 2.0 ports on the back (no 3.0 ports here, sadly), alongside the full-size HDMI output and power socket.

Its edges house the 3.5mm headphone jack and SD card slot, while front edge is left empty. There is, predictably, no optical drive. Thin doesn’t come for free.

The performance of Acer’s S3 Ultrabook will vary hugely between models – an i7 CPU is much faster than an i3m after all, but our hands-on did tell us something more conclusive about its screen and keyboard. It uses a TN panel, using an LED backlight as its light source.

As such, it’s not immune to the contrast shift that afflicts almost all laptops. Screen quality seems better than budget models, though, this shifting effect only kicking in significantly when the display’s tilted back quite far. The S3’s hinge lets you flip the screen back to almost 180 degrees. We found that the hinge couldn’t quite hold the screen’s weight though, slowly opening further by itself when opened to an extreme angle. This hinge may be tightened-up for the retail model – we were informed that there were still some tweaks to be made to the pre-production sample we tested.

The keyboard uses the popular Chiclet style, with a look very similar to the ‘board of Apple’s Macbooks. We found that the key action could do with a little more definition though. A little bit of clickiness can go a long way to increasing your typing confidence when bashing away at speed. Also like Apple’s models, the large trackpad has buttons built into the surface – so you effectively push the whole pad down when clicking. There was a bit of a clicky dead zone at the top of the pad, but again this may have been a pre-production issue. The trackpad was otherwise pleasant to use, with a nice lightly-textured surface and a good working area. 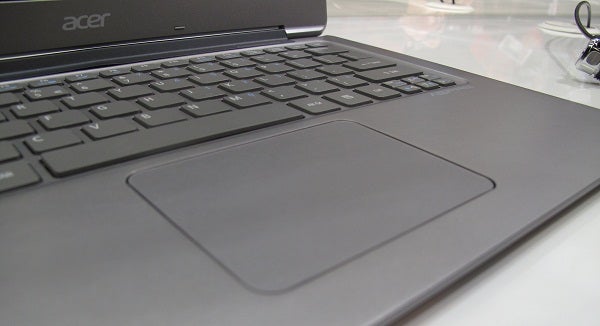 In the unveiling presentation, Acer was keen to big-up how quick off the mark the S3 is. It’ll apparently rise from sleep slumber in 1.5 seconds, and connect to saved Wi-FI networks within an additional 2.5 seconds. We couldn’t get the pre-production model to play ball on this front, but should supply the new Ultrabook’s Windows 7 operating system with some of that sweet MacOS speed.

Another feature we couldn’t test, but which appeals, is the laptop’s deep sleep mode. Acer claims it will let the internal battery last for 50 days on standby, so you won’t have to watch it switch off after three seconds after neglecting it for a week. The battery lasts for a reported seven hours in the SSD-only model, which is cut down to six hours in models with hard drives added. The president of Acer’s personal computing sector Campbell Kan said that these figures were based on MobileMark testing – which is handily what we use in our laptop battery benchmarks.

It’s difficult to try and label the Acer Aspire S3 Ultrabook as anything but a reaction to Apple’s Macbook Air models without it feeling like an exercise in self-deception. But sensibly Acer hasn’t gone head-to-head on all fronts. In ditching the expensive unibody construction, the manufacturer has been able to use its usual strategy of undercutting the competition. We’re yet to hear the exact specs and prices that will be available to us in the UK, but £799 is much easier to swallow than £1099 – even if the Aspire S3 doesn’t quite have the desirability of Apple’s babies. But then who does?