Has Tesco improved upon its surprise hit tablet?

Tesco has revealed its second ever tablet following last year’s hugely successful Hudl, but the Hudl 2 appears to be an entirely different proposition.

The first Tesco Hudl took everyone by surprise — including, it seemed, Tesco itself. Now the UK retail giant knows exactly what it has on its hands, and has come up with a vastly improved device.

So, here we have the Tesco Hudl 2, which promises to provide more power and a bigger, better screen the original and all at the same £130 launch price. Here’s how the two compare.

We’ve had to be a little vague here, as Tesco hasn’t released a number of the key specs for the Hudl 2, including its weight and thickness.

You can bet that the Hudl 2 is a little heavier than the 370g Hudl, due to the latter’s display. It’s also a longer, less square tablet.

Tesco has stuck with the same soft-touch matte-plastic material for the rear shell, which makes it pleasantly plush and grippy to hold.

On a practical note, Tesco has also managed to squeeze in a set of Dolby-optimised speakers on the back of the Hudl 2 that apparently simulate the placement of surround sound speakers whether you’re listening through the speakers or the headphones.

This is arguably the biggest difference between the Hudl and the Hudl 2. While the original tablet had a 7-inch display, the Hudl 2 moves to a new category with its 8.3-inch screen.

That puts it closer to the likes of the Samsung Galaxy Tab S 8.4, and bang in between the 7.9-inch iPad mini 2 Retina and the Amazon Kindle Fire HDX 8.9.

That works out to a more pixel-dense display, 273ppi as opposed to the original’s 242ppi. All-in-all, it’s a big improvement. 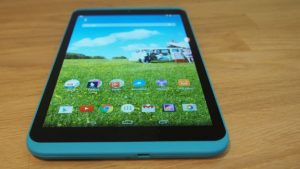 The second biggest improvement over the original Tesco Hudl is the Hudl 2’s power. Whereas the original came with a budget 1.5GHz quad-core ARM CPU, the Hudl 2 comes with an Intel Atom quad-core CPU clocked at 1.83MHz.

That’s a much faster chip, and we found the difference to be instantly noticeable during our time with the tablet.

This difference could also be attributed to the Hudl 2 having double the amount of RAM of the first Hudl, 2GB versus 1GB.

Original Tesco Hudl users benefited from a near-stock version of Android 4.2.2 Jelly Bean, but they’ve been waiting for an upgrade to Android 4.4 KitKat for a while now.

The Tesco Hudl 2, on the other hand, ships with Android 4.4.2 KitKat. It’s the quickest, slickest version of the OS yet, and Tesco’s tampering has been similarly light.

Sure, you get a bunch of Tesco-themed widgets for Clubcard usage, Blinkbox, online shopping, and the like. But you can remove those from the homescreen, leaving only the little Tesco ‘T’ in the corner as a shortcut to these services.

Mindful of the original Hudl’s popularity as a kid’s tablet, Tesco has fitted the Hudl 2 out with multiple user profile support and a Child Safety mode to keep kids away from unsuitable content. 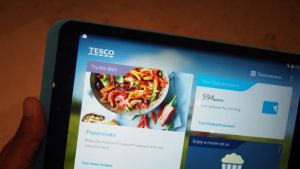 Taking photos on your tablet still seems a little daft to us, but we see enough iPads and Android tablets held aloft at public events to know that we’re perhaps in the minority here.

As such, the Hudl 2 comes with a superior 5-megapixel camera. The original Hudl had a 3-megapixel example.

More important, to our eyes, is the inclusion of an improved 2-megapixel front-facing camera rather than the first Hudl’s 1.2-megapixel unit. This should improve the performance of video calls significantly.

About the only way in which the Tesco Hudl 2 and the Tesco Hudl are matched, aside from that brilliant £130 launch price, is storage. Both come with 16GB of internal storage, and have a microSD slot for expansion up to 48GB.

It’s a bit of a no-brainer this, even ahead of a full review. Barring any unforeseen battery life or performance disasters, the Hudl 2 is set-up to be a vast improvement. It’s faster and sharper, and it comes with a more recent version of the Android OS. We’re impressed.

Next, read our Best Tablets round-up