What is the Tesco Hudl tablet?

Given that the supermarket giant hasn’t exactly been renowned for its tech innovation up to now, the Tesco Hudl has taken us a little by surprise. Tesco has stamped its name on the budget tablet market with the release of the Hudl, its very first tablet – and a truly decent one at that.

Tesco’s 7-inch Wi-Fi-only Android tablet is looking to take on Google’s pricier Nexus 7 and Amazon’s Kindle Fire HDX. Available at launch for £119, the Hudl is now priced from just £79 since the release of the Tesco Hudl 2, and can be bought for considerably less if you’ve accumulated enough Tesco Clubcard points. That’s around £80 cheaper than the Nexus 7 16GB model, which is down from £199 at launch to £150.

Plenty of budget Android tablets have been and gone and have really missed the mark. The Tesco Hudl, though, offers value for money, decent overall performance and the design team has really thought about how to make cheap Android tablets easy to use for the whole family.

Over one year on and with 750,000 units of the Hudl now sold, the Hudl 2 has now replaced the smaller original model. The Hudl 2 boasts improved specs across the board and is still available at a low enough price to convince shoppers to drop it in their trollies.

The
Tesco Hudl doesn’t look too different to most 7-inch Android tablets.
It has none of the cool metal and slick design elements of the iPad mini Retina,
but then it costs a fraction of Apple’s tablet. Instead the curved
corners and chunky bezels around the screen give it a very similar look
to the Kindle Fire HD. Our review Hudl comes in blue, but you can alos
get it in black, purple and red.

Tesco has clearly taken inspiration from Google and Amazon on the back and opted for a matte, rubber rear with an
embossed Hudl logo. The rubber feels harder compared to the softer,
textured back on the Nexus tablet. It doesn’t add anything substantially
in terms of comfort, but it’s nice enough to grip. The back wraps
around the sides of the screen and is just slightly raised from the
screen to add protection when the Tesco tablet is laid screen-down on a
table.

When you pick the Tesco tablet up you’ll instantly notice
how heavy it feels for a 7-inch tablet. It actually weighs 370g. To put
that into perspective, the Nexus 7 weighs 290g, the Kindle Fire HD 7 is
395g and the 7.9-inch iPad Mini is 308g. You’d think that wouldn’t make a
lot of difference, but simply picking up the Nexus 7 and Hudl together
you can get an idea of which one is less of strain to hold for long
periods of time. It’s not a major issue, but you’ll probably find it
more suitable to use the Hudl lying down on the sofa. 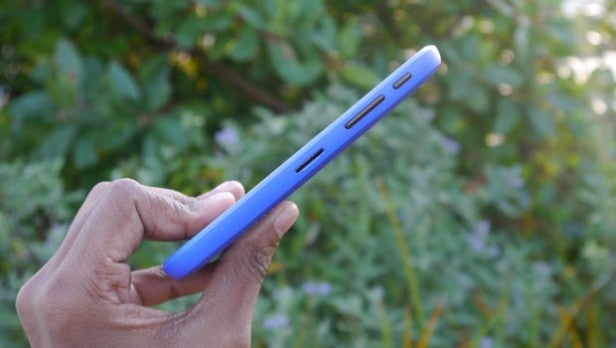 The
Hudl is 9.85mm thick making it chunkier than the iPad Mini (7.2mm) but
surprisingly thinner than the Nexus 7 (10.45mm) and the Kindle Fire HD
(13mm). It definitely lacks the sleekness of the Nexus 7 2, but as a
tablet for all the family, the extra thickness should make it easier for
smaller hands to get to grips with and easier to survive drops.

Once
you see where buttons and ports are laid out it’s clear that the Tesco
tablet is geared towards being used in landscape mode. The microUSB
charging port sits on the bottom and up top is the micro HDMI port to
connect the Tesco tablet to a TV (cable supplied separately). The
2-megapixel front-facing camera sits on the bezel below and to the right
you’ll find the microphone and 3.5mm headphone jack.

On the
right side of the tablet (or bottom if holding in portrait mode) is the
microSD card slot, single volume rocker and on/off button. On the back
there’s a pair of speakers and the 3-megapixel rear-facing camera.

In
reality it’s good but not fantastic. The screen looks a little murky
and washed out particularly on the homescreen. The depth and range of
colours is lacking compared to the Nexus 7 2 and Kindle Fire HD. Image
sharpness is good for HD content but the Hudl tablet doesn’t do much to
help enhance non-HD content. 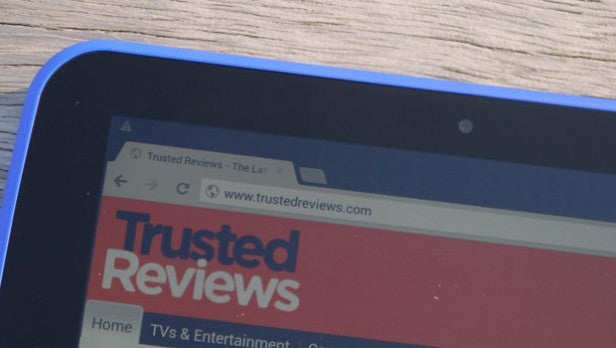 Running
the same video on the Hudl and the Nexus 7 2 on maximum brightness,
there’s clear issues with colour accuracy. While images appear generally
warmer, whites look more yellow in the identical footage we compared to
the Nexus 7 2. That’s acceptable at this price, though the Asus MeMO
Pad HD 7 edges it a little for actual fidelity despite its slightly
lower resolution.

The Hudl screen supports 10-point multi-touch
and we can’t really have any complaints about response to swipes on the
home screen or opening up apps. Pinching and zooming works fine for web
pages and the standard Android keyboard offers an accurate typing
experience.