Has LG managed to improve upon the best phone of 2014?

The LG G3 was our pick for the Phone of the Year in the TrustedReviews Awards 2014, so it’s only natural that we’d be extremely interested in the LG G Flex 2 announced at CES 2015.

While this second slice of bendy smartphone design isn’t the direct follow-up to the LG G3 – that would be the LG G4, set for release mid-way through the year – it is another highly capable smartphone from the South Korean manufacturer.

As with the first LG G Flex, the key design feature of the otherwise fairly nondescript LG G Flex 2 is its pronounced curve. The whole handset bends around like a banana.

Thanks to a flexible display made from new Dura-Guard glass and a suitably pliant plastic body, the LG G Flex 2 can be bent a surprising amount without risk of shattering.

Aside from that curve, the LG G Flex 2’s other design quirk is it self healing skin, which enables it to recover from minor scuffs and scrapes – a feature that the otherwise well-equipped G3 lacks.

Though it has a similar-sized display to the LG G3 – more on which in a moment – the LG Flex 2 is still a little bigger in all departments. It’s not significant, but the new phone is taller, wider, and thicker than the current flagship. It’s also a few grams heavier.

Otherwise, the LG G Flex 2 has borrowed a few notable design elements from the popular G3. It’s got the same distinctive rear button placement, and the speaker layout is also familiar. 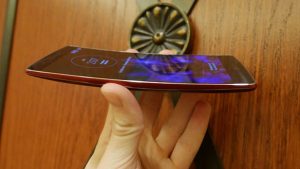 As we’ve already mentioned, the most notable thing about the LG G Flex’s display is that it’s flexible. This is thanks to the use of LG’s plastic OLED technology.

Of course, OLED screens aren’t just handy for their greater flexibility. They also create superior blacks and more vibrant colours to LCD panels, as found on the LG G3.

Conversely, IPS LCD displays tend to have more accurate colours and finer detail. That’s certainly the case with the LG G3 with its QHD resolution. It was the first mainstream to feature such a component, and it continues to be a fine performer.

By contrast, the LG G Flex drops to a Full HD 1080p resolution. On paper this works out to an inferior pixel density of 403ppi compared to the G3’s 534ppi, but in our experience this isn’t quite as big an advantage as you might expect. 1080p still feels plenty sharp enough.

One major display feature that both phones share is size – they both measure up at 5.5-inches, which is just entering phablet territory. We found the LG G3 to be comfortable to hold and use, though, and we expect the LG G Flex 2 to be the same. 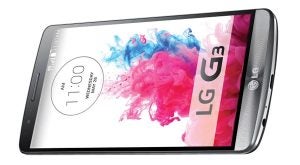 So far it could be argued that the LG G3 has come out on top, but the LG G Flex 2 has an undoubted advantage when it comes to processing power.

While the LG G3 makes use of last year’s top Android processor, the Snapdragon 801, the Flex 2 shifts to the brand new Snapdragon 810.

There are a number of improvements here, including a shift to a 64-bit architecture in keeping with Android 5.0 Lollipop. It also utilises an octa-core set-up, which involves switching between a high and low power quad-core set-up, depending on the intensity of the task.

Both phones have a choice of 2GB or 3GB of RAM depending on the chosen storage specification. Speaking of which… 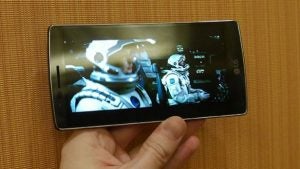 You get the same 16GB or 32GB storage option with both the LG G Flex 2 and the LG G3. Yes, we’d have liked to have had a 64GB option, but at least both have microSD slots – something that was missing from a surprising number of the Android handsets that turned up towards the end of 2014.

The LG G Flex 2 takes the bragging rights in this small detail, too. While the LG G3 could accept microSD cards up to 128GB in capacity, the newer device can accept cards that go up to a massive 2TB.

SEE ALSO: Snapdragon 810 processors: Things to get excited about

We’ll have to spend some proper time with the LG G Flex 2 to be sure, but the initial spec release suggests that it’s been fitted with the exact same camera as can be found in the LG G3.

That means a decent 13-megapixel example with a couple of useful features, including optical image stabilisation and an innovative laser autofocus system.

In the LG G3, this makes for relatively quick and clear snaps in low light, so we’re happy to see it brought across to the LG G Flex 2. 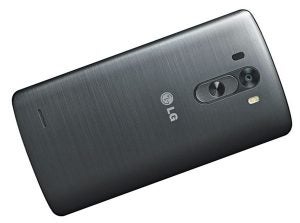 Both phones come with a 3000mAh battery, but the LG G Flex 2 loses a few points on the LG G3 for being non-removable. With the LG G3, you can carry a spare around.

On the other hand, we’d expect the battery life on the LG G Flex to be superior to the G3’s. It has a more efficient processor and a lower resolution display – two things that should lead to a lengthening of times in between charges.

Given that we found the LG G3’s battery performance to be merely average, this could be an important factor if you’re deciding between the two. 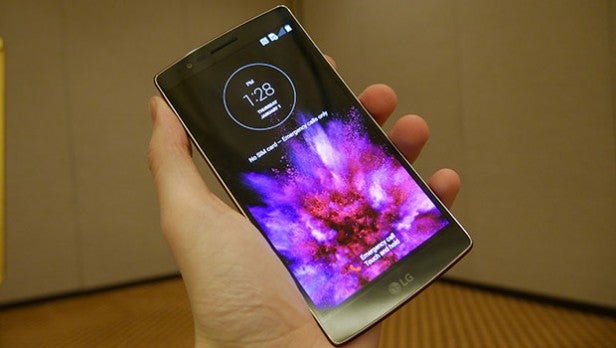 There’s still plenty of testing of the LG G Flex 2 to be done, but it’s shaping up to be a highly accomplished phone. However, we won’t be selling our LG G3s just yet.

We were left distinctly underwhelmed by the original LG G Flex last year – it was expensive, unwieldy and more than a little gimmicky. LG appears to have addressed at least one of those concerns – it’s noticeably more compact – and we’re hopeful that some more reasonable pricing will also follow.

But has it managed to bridge the gap between one of the most disappointing smartphones of last year – the original Flex – and the absolute best? We’re a little doubtful.

With the LG G3 available for a very good price right now, and the LG G4 certain to supersede the LG G Flex 2 on the spec front, the LG G Flex 2 could find itself falling between two formidable stools – another experimental oddity swamped by better conventional phones.