Qualcomm’s new Snapdragon 810 chip will be powering most of the flagship smartphones launched in 2015 with the LG G Flex 2 the first phone to be powered by the next generation CPU. It’s fair to say you can probably expect to see the Samsung Galaxy S6, the LG G4, the Sony Xperia Z4, and the HTC One M9 all running on it when they launch late this year.

The chip-maker has confirmed the next three months will see devices embracing Snapdragon 810, but what exactly is it bringing to the party? Here’s where you can expect to see the biggest smartphone improvements.

No, the Snapdragon 810 won’t double the number of simultaneous processor cores of your current phone. Let’s be honest, no app or operating system really exploits the whole quad-core thing just yet.

Rather, like Samsung’s Exynos range, the new Qualcomm octa-core chip will adopt two quad-core set-ups, switching between the two as needed.

One of these will be used for general, low-power tasks, while the other higher-clocked set will kick in when things get tricky, such as when booting up a graphically demanding 3D game or watching a 4K video.

This presents a ‘best of both worlds’ scenario, offering power-efficient day to day usage, but with plenty of power on tap.

Apple was first to market with a 64-bit mobile processor back at the end of 2013 with the iPhone 5S and its A7 chip. Then Nvidia were next winning the Android race with the 64-bit Tegra K1 CPU found inside the Nexus 9 tablet.

However, it’s Qualcomm that will establish the 64-bit standard on Android phones in 2015 with the Snapdragon 810.

So what do 64-bit processors have over the current 32-bit lot? Potentially, masses of extra processing power. 64-bit processors can handle more data at once, and Android 5.0 Lollipop is the first version of Android to support such hardware.

To be honest though, that almost certainly won’t be exploited to anything like its full potential in this upcoming generation of devices.

64-bit processors only really come alive with more than 4GB of RAM – the maximum amount that 32-bit chips can exploit. No current smartphone has hit the 4GB mark yet, and no phone in the immediate future will need to either.

No, the general shift to 64-bit architecture is a move for the future, and one we probably won’t see any huge benefit to in the Snapdragon 810. 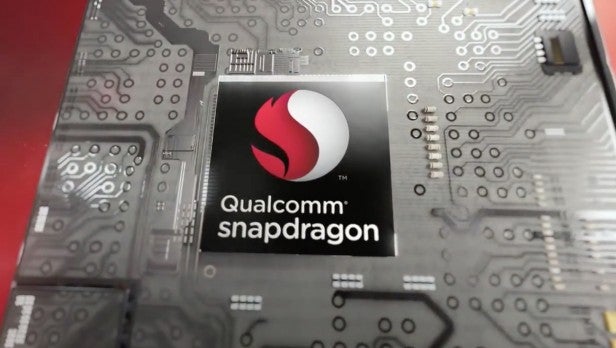 If that whole 64-bit dampener has you on a bit of a downer about the Snapdragon 810’s performance, don’t let it. It’ll be blazingly fast – it’s just that other factors will make it so.

For gaming the Adreno 430 GPU promises to deliver console-style gaming. With it, graphical performance will take a 30% leap over previous generations of the Snapdragon chip. Despite this, it’ll use 20 percent less power.

Qualcomm has been working with Epic game to get the Unreal Engine running on the 430 offering slick graphics and enhanced detail like high dynamic lighting picking out the detail when you move from light to dark areas. If you play Candy Crush it will be wasted on you, but mobile FPS gamers will lap up the ramped up performance.

Perhaps the biggest hardware feature of the Snapdragon 810 is its native 4K capabilities. Of course, we’ve already seen handsets that can shoot 4K video, but the Snapdragon 810 can go a step further and stream 4K content. Qualcomm is set to show case 4K streaming over LTE at CES this year.

Naturally you’ll need a relatively swift Wi-Fi or 4G data connection to do so (more on which in a moment), but thanks to the Qualcomm chip’s support for the H.265 video codec, those sizeable 4K videos will be well compressed and a lot more wieldy.

That streaming will go both ways, too. Any 4K footage you’ve shot on your new phone’s camera, or that’s simply stored on it, can be pushed to your TV at 802.11ad speeds – though you’ll need a compatible dongle plugged into your TV.

The Snapdragon 810 chip will support the very latest standard of 4G network connectivity, Category 9 LTE. This means that it will support mighty maximum theoretical download speeds of 450 Mbps. 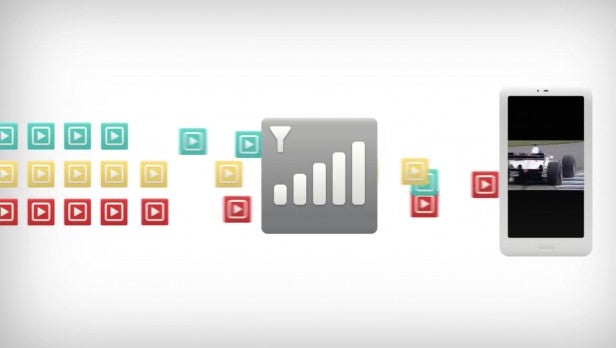 The camera is becoming an increasingly important component in modern smartphones, and the Snapdragon 810 CPU will enable some very smart new technology to help dramatically improve the quality of your snaps.

The chip’s Corephotonics dual camera technology finally finds a way to bring optical zoom (of sorts) to smartphones without the need for a whopping great sticky-outy lens.

As the name suggests, the solution involves two cameras – one set for normal wide-angle shots and one for 3x zoom shots. By skilfully combining these two lenses with good old digital zoom, you can get a smooth and familiar zooming effect rather than jumping between the two lenses.

It’s not just zooming that will benefit from this dual lens set-up. General image quality will receive a boost by taking the same snap with both lenses and creating one superior shot from the two. It promises to lead to significantly less noise, particularly in low-light shots.

Read More: Tegra K1 – what it means for mobile gaming 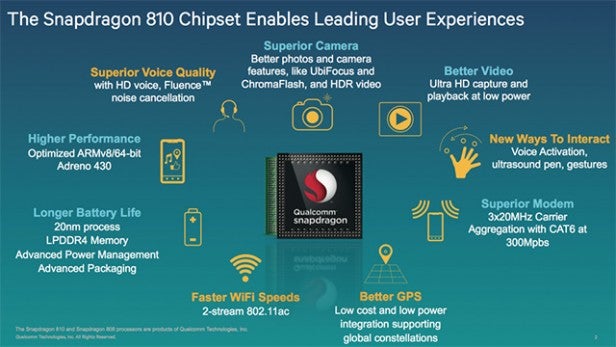 Sound of the cinema

Smartphone audio will also receive a huge boost in the Snapdragon 810, both in terms of capturing and pumping out sound.

In terms of output, Dolby Atmos support will provide a surround sound-like experience on a simple set of stereo headphones. Your Netflix sessions on the train home are destined to get even more cinematic.

As for recording, Fluence Pro support will allow devices that sport three microphones to record full 3D sound. You’ll even be able to manually select the direction you want to record sound in.