Which new iPhone should you buy: The iPhone 6S or iPhone 6S Plus? Here’s all you need to know.

Still keeping a grip of that iPhone 6 or iPhone 6 Plus? Bin it, right now. Don’t even head to the charity shop, no-one wants that trash. OK, maybe try eBay but we’re not promising anything.

So, now you’re ready for that upgrade. But which iPhone is right for you this time around? Even though they look almost exactly the same on the surface, this ‘S’ cycle has seen quite a a spruce up on the inside. And as they have been out for a while, more and more apps are starting to utilise features like 3D Touch – we’ll get more into this later.

Both the iPhone 6S Plus and the iPhone 6S look nigh-on identical to their immediate predecessors, which means that they also look very similar to one another – with one notable difference.

The obvious thing, which most of you may already know, is size. Just like the last generation, the iPhone 6S has a 4.7-inch screen while the iPhone 6S Plus has a larger 5.5-inch one.

It’s a separation fairly similar to that of the Galaxy S6 and its bigger brothers, the Galaxy S6 Edge Plus or Note 5. However, the iPhone 6S Plus is actually pretty big even for a phone of its screen size.

Some of you may find its 77.9mm width a bit too much to handle. It’s even wider than the 5.7-inch Note 5, for example. That said, whenever we end up thinking a phone is too big we usually just sink into how it rolls after a few days. 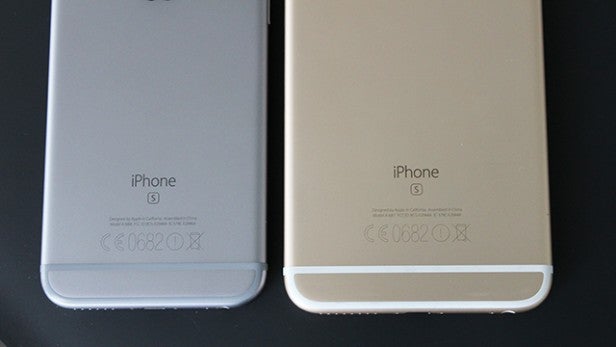 The two phones might look similar to their predecessors, but they’ve actually been built in a fundamentally different way thanks to last year’s internet hoo-hah. The iPhone 6 Plus became a bit infamous because of the whole bendgate scandal, the claim it had a tendency to bend just from the pressures of your pocket.

Apple has addressed this by upgrading the body from some form of (unnamed) bog standard aluminium alloy to 7000-series aluminium, a formulation used in all manner of high-end aluminium constructions including the Apple Watch Sport. Both the iPhone 6S and iPhone 6S Plus use this alloy style, but it’s one to bear in mind if you were put off by all those reports of bendy Plus phones earlier this year.

The other big thing to consider is, of course, the screen itself. Living with a 4.7-inch phone and a 5.5-inch one is a totally different prospect.

It’s doubly important if you’re moving from a recent Android phone, whose display may well be bigger than 4.7 inches across. The larger screen is much better for watching video, for playing games and even for browsing. There are some pretty great pay-offs for that extra aluminium bulk in your pocket.

The question is: how much digital stuff do you consume on your phone? If you’re a big gamer or watch Netflix on your phone all the time, the iPhone 6S Plus will be the much better entertainment buddy.

Size is the main difference here, as both screens otherwise offer excellent image quality. Colour, contrast and sharpness are all great, able to go head-to-head with Android phones that have a clear spec benefit. You see, the iPhone 6S’s 1334 x 750 pixel screen is only a bit above 720p resolution and the iPhone 6S Plus is 1080p when several Android phones have moved up to QHD at this point. 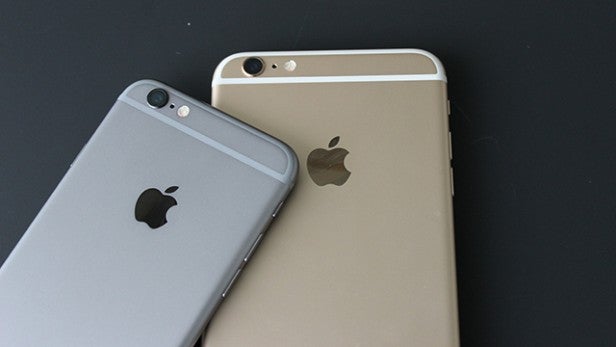 Both phones have Apple’s new 3D Touch system stashed under those toughened Ion-X displays, too.

What’s 3D Touch? This is Apple’s iPhone take on a pressure sensitive screen, letting you access handy little shortcuts and previews throughout iOS 9 by pressing more, or less, hard.

You can preview emails and website links, jump straight to key functions from app icons, and more. It still needs third party developers to update their apps (which they’re beginning to do) before it’s a real hit, but the potential is vast.

3D Touch is the reason why both the iPhone 6S Plus and the iPhone 6S are thicker and heavier than their predecessors, but it’s a worthwhile trade-off all-round.

In terms of performance, the two phones are almost identical. Both utilise Apple’s new 64-bit A9 CPU, which boasts a faster clock speed than previous models and a significantly faster GPU.

In fact, the A9 CPU manages a 70 percent boost over last year’s A8, while the PowerVR GT7600 GPU provides a 90 percent graphical boost.

Perhaps the most significant improvement in performance for both phones, however, is the doubling up of the RAM allotment to 2GB. 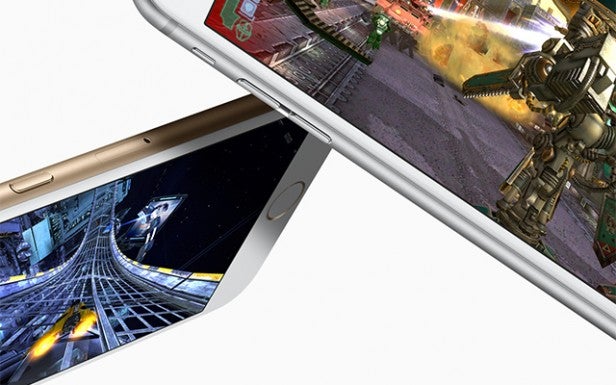 Web pages and apps are now kept in stasis for much longer, which means that they’re ready and waiting when you jump to them in the new-look multitasking menu – not loading up afresh as they would be with last year’s models.

You might have noticed that we said performance was almost the same. Well spotted. There’s actually a slight different in the iPhone 6S’s favour, simply thanks to its lower resolution display.

Fewer pixels to push means less CPU and GPU grunt required, but the difference is negligible bordering on non-existent in day to day usage.

Again, the camera technology used in both of these phones is very similar indeed. Both have been bumped up from 8-megapixel to 12-megapixel, which means that images are even more detail-packed. Apple has also reduced colour leak between pixels, resulting in cleaner images.

Video recording also gets a detail bump up to 4K, which brings Apple’s flagship range up to the level of their Android rivals.

The one point of difference here is OIS, which stands for optical image stabilisation. The iPhone 6S Plus has it, while the iPhone 6S doesn’t.

Related: iPad Pro – 6 features that will make you want one 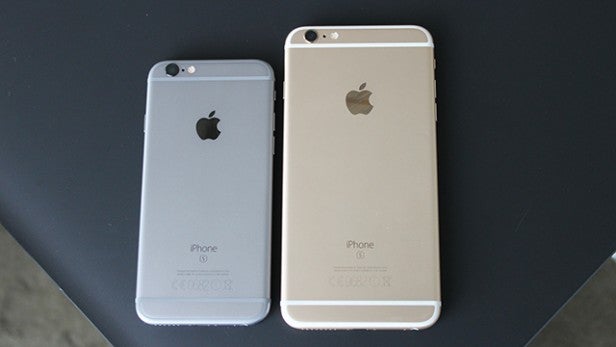 In terms of general, well-lit photos, the difference made by this component is negligible. When it comes to low-light shots and video recording, however, you’ll notice that the iPhone 6S Plus is better.

OIS nullifies the effects of camera shake, which has benefits for video. It also allows for night-time and low-light exposure times to be a little longer, thus resulting in brighter shots.

Interestingly, both phones’ batteries are smaller than their predecessors. This is because of the new Taptic Engine that Apple squeezed in to help communicate the new 3D Touch interface elements.

However, the more efficient A9 CPU and Apple’s iOS 9 optimisations mean that battery life hasn’t suffered to any meaningful degree.

The iPhone 6S will still comfortably last you through a full day of moderate usage, while the iPhone 6S Plus can stretch to two days. The bigger phone is by far the better bet if you frequently find recharging opportunities hard to come by.

Both phones have a handy new Low Power mode to help eke out battery life in extreme situations, too. 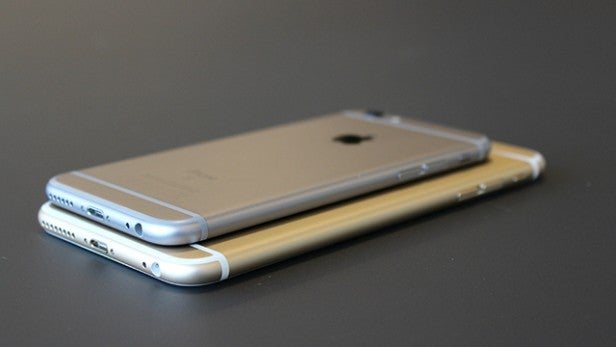 The storage options on these two iPhones are identical, and the 64GB and 128GB options are both plenty generous enough, we feel.

More concerning is the continued presence of a 16GB entry model for both. This simply isn’t enough for a modern non-expandable high-end smartphone, especially considering that both phones now take considerably larger photos and videos than before.

Why does Apple persist with the blatantly insufficient 16GB model? It’s likely a somewhat cynical financial calculation, encouraging customers to upgrade to the more expensive mid-tier.

Regardless of the reason, Apple really needs to switch to a 32GB minimum for the iPhone 7 and iPhone 7 Plus.

Apple has turned out two more high class smartphones in the iPhone 6S Plus and iPhone 6S.

Both phones are significant upgrades on last year’s models, despite their similar looks. However, our recommendations on which of the two your should choose are the same as before.

The iPhone 6S Plus is materially the better phone of the two, with a superior camera, a much bigger and sharper screen, and significantly better battery life. If performance is everything to you, there’s only one winner.

Of course, the iPhone 6S has one notable advantage: its practicality. It’s much more pleasant to wield and lug around, and you can still use it with one hand – something that’s just not possible with the iPhone 6S Plus.

The iPhone 6S is arguably far truer to the iPhone’s compact lineage than the iPhone 6S Plus, which (in addition to its cheaper price) will likely continue to make it the more popular choice.