We now have a good idea of what the next generation of smartphone software from Apple and Google will look like, thanks to the announcement and beta launches of both iOS 10 and Android 7.0 Nougat.

The question is, which of the two is shaping up to be the more exciting, forward-thinking operating system?

As always, Apple and Google have taken slightly different approaches to similar problems. However, there are a number of areas in which the two operating systems can be compared.

So, how will iOS 10 and Android Nougat look? Much like iOS 9 and Android Marshmallow, seems to be the predictable answer.

Neither Apple nor Google are presenting a total reinvention of their respective platforms here. And why would they, when we’re talking about the two leading mobile operating systems on Earth?

That’s not to say that there aren’t some notable differences to both interfaces.

In iOS 10, for example, Apple is taking iOS 9’s 3D Touch implementation much further. If you have a member of the iPhone 6S or (presumably) iPhone 7 family, you’ll be able to press firmly on app icons to bring up widgets. These will grant quick access to core functions without having to open the apps. 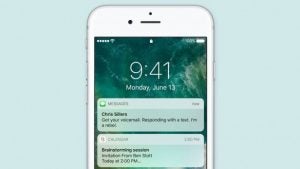 Control Centre is also 3D Touch-sensitive, letting you do things like increase the intensity of the torch beam or set a specific timer.

Going back to widgets, Apple is also offering them on the iOS 10 lock screen, accessible with a swipe to the left. It’s a different approach to Android’s long-standing home screen widgets, but it’s no less valid for it.

iOS 10 will also wake when you lift up the phone from a flat surface, and will require you to physically press the home button to skip past the lock screen. These functions will serve to solve that ‘problem’ of the Touch ID system on the iPhone 6S being too darned effective, leaping you straight past your iOS 9 lock screen notifications.

Apple’s new OS seems to have the edge on intuitive interactivity. However Android Nougat, for its part, is likely to retain the multitasking crown. Quick Switch enables you to instantly jump back to your previously used app with a double tap of the Recent button. 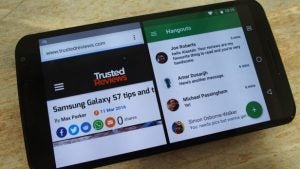 Meanwhile, you’ll be able to run two apps simultaneously side by side in landscape through the Recent menu, and even drag and drop items between them. Apple hasn’t added this feature to its phones in iOS 10 – not even for the larger Plus phones, where it would really make a lot of sense.

Interestingly, Google appears to be following Apple’s lead and implementing its own pressure-sensitive screen system in Android Nougat. The latest developer preview contains evidence of iOS-like app icon shortcuts which will be accessed through a firm press of the icon.

It’s possible that iOS 10’s intuitive UI advantage might not last long, though it will depend on hardware support from Android manufacturers as well as Google’s effective UI implementation.

Notifications are part of a UI, of course, but they’re such a major part of using both iOS and Android that we’re giving them their own section.

What’s more, both iOS 10 and Android Nougat are set to overhaul how they handle notifications.

In Apple’s latest OS, 3D Touch is deeply involved, letting you expand notifications and initiate quick responses and other actions. The notification menu itself is now a simplified stand-alone menu – there’s no Today view to confuse things (that now lives to the left of the lock screen and home screen). 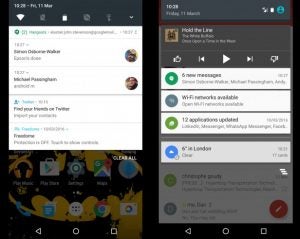 Android Nougat’s notifications now take up more of the screen which, combined with a change of font, provides more information as standard. The notification menu also provides quicker access to your favoured settings toggles (which is now customisable), without requiring the irritating double-swipe action of Android Marshmallow.

Google has also added the ability to stack notifications, so they can be bundled together according to app. Which iOS already does, in its own way.

Another handy addition is the expansion of quick replies beyond the current limited selection. So in WhatsApp, for example, you’ll be able to send replies direct from the notification menu.

Finally, iOS is finally adding a ‘Clear all’ option for notifications – we know, we know: about time too.

We just used WhatsApp as an example in the previous section, and the brutal truth is that this – alongside Facebook Messenger and Snapchat – is dominating smartphone messaging right now. Neither Apple nor Google is happy about being left out, and it shows in both iOS 10 and Android Nougat.

Apple is massively enhancing iMessage in iOS 10, and it clearly has those aforementioned rivals in mind with its tweaks. You’ll be able to plaster your message threads with icons and animations, emoji will play a bigger role (quite literally), and you’ll even be able to add handwritten messages.

More interestingly, iMessage will have the scope to implement its own type of third-party apps into it. This will enable you to readily share a wide range of content with your contacts without having to open specific apps or even a generic iOS sharing menu, as well as doing more advanced things like ordering food and making person-to-person payments – all within the Messages app. 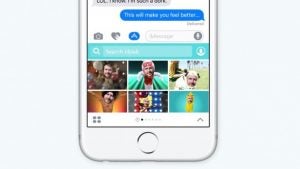 Google’s approach to messaging in Nougat is less showy, but potentially even more game-changing. The company is launching a whole new standalone messaging app called Allo, which will incorporate its considerable search and machine learning technology.

You may well have glazed over at that description, but it could mean a massive step forward for messaging. It means that you’ll be able to conduct Google searches, make restaurant bookings and much more from within Allo itself. The app will also learn over time and suggest replies based on the words and photos that have been sent to you.

There’s also an ephemeral message option for that discrete Snapchat vibe, plus, you get the ability to increase the size of emoji and scrawl over photos before sharing.

This is more of a case of Apple Photos catching up with Google Photos, but as it’s a feature that’s baked into iOS 10 we thought we’d include it here.

Apple is improving Photos in iOS 10, and it’s not hard to see where it’s gained its inspiration from.

Photos will now automatically group together faces and compose slideshows from related snaps. Yes, just like Google Photos. Of course, Apple was at pains to point out that all of this will be achieved discretely on the device in a clear dig at its rival – but that just serves to acknowledge who the front-runner is here.

Indeed, our initial impressions from the iOS 10 beta suggest that Apple Photos is still some way off the current level of Google Photos – but there’s still time for that to change ahead of the full launch.

When it comes to assistant software, Apple may have been first with Siri, but Google has since overtaken it with with the sophistication and open nature of Google Now.

With iOS 10, it’s another case of Apple playing catch-up. Here, Siri finally opens up to third-party app developers, so you’ll be able to ask Apple’s assistant to access non-Apple apps. Imagine asking Siri to order an Uber, or send a WeChat message for you.

Google has been improving its Google Now on Tap tool separately from the main Android OS, so it didn’t have a lot to say on that front in terms of Nougat-specific improvements. 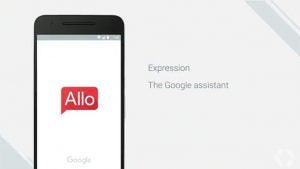 However, as we noted previously, Google does seem to be integrating its own assistant software into new and exciting places for Nougat – such as in its new Allo assistant app, where it can pull out photos and make reply recommendations for you.

At Google I/O, the example was used of finding out information on your favourite football team. After an initial enquiry about how your team is doing (Google knows who that is, obviously), you’ll be able to follow the line of enquiry by tapping Google’s recommended chat terms, like ‘Next game’ and ‘Roster’, or typing in your own. Answers will be supplied as if you were chatting to a particularly knowledgable and tech-savvy friend.

While Apple and Google have taken different paths to where they are right now with their mobile operating systems, iOS 10 and Android Nougat show they’re gradually converging.

Apple appears to be closing the gap on Google in terms of widgets and third-party app integration, while Google is reportedly implementing app icon shortcuts and app notification groupings like Apple.

We won’t know which OS is the more complete and forward-thinking until we get our hands on final software. But there’s a fair chance they’ll be functionally more similar than ever.

Watch The Refresh: The latest tech gossip and reviews every week

Which OS do you think will come out on top? Let us know in the comments.