We run through all you need to know about the Microsoft HoloLens, the company’s augmented reality headset.

Microsoft’s innovative augmented reality headset isn’t going to arrive anytime soon, but with development kits being sent out this week, we’re one step closer to seeing the HoloLens hit stores.

At a cost of $3,000 (about £2,160) per headset, the HoloLens development edition allows developers to start making games and apps for the forthcoming headset. There’s still no word on exactly when a consumer edition will launch however.

But what exactly is HoloLens? Is it an Oculus Rift or HTC Vive rival? Or does it have more in common with the discontinued Google Glass?

Here’s what we know so far about one of the most intriguing and exciting tech announcements in recent years, including what the potential HoloLens release date could be.

What is HoloLens exactly?

HoloLens is essentially a holographic computer built into a headset that lets you see, hear, and interact with holograms within an environment such as a living room or an office space. Microsoft has built the headset without the need to be wirelessly connected to a PC, and has used high-definition lenses and spatial sound technology to create that immersive, interactive holographic experience.

HoloLens Release Date – When will it come out?

Microsoft has remained coy on a potential HoloLens release date, originally saying it would come out within the ‘timeframe’ of Windows 10.

We know it won’t be released for consumers for some time, as Microsoft just released the HoloLens developer kit. The company initially invited developers to apply for the dev kit in October 2015, before shipping the development edition in late March 2016 to US and Canada. 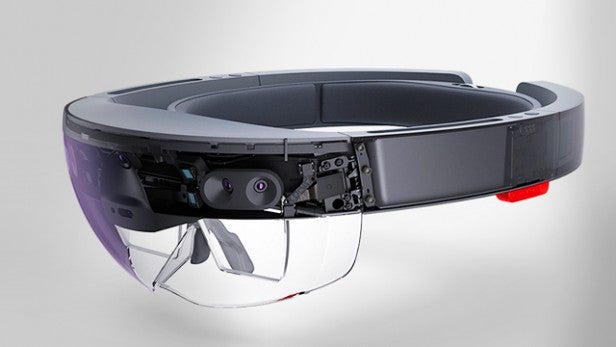 Since you have to be a developer who’s signed up to the Windows Insider programme in order to be in with a shout of owning the headset at this point, most of us will still have to wait.

Despite the development edition shipping, there’s still no word on any kind of consumer release date as yet, with Microsoft’s Alex Kipman saying “broad consumer availability is further down the line.”

So how does the whole hologram thing work?

The HoloLens comes with semitransparent holographic lenses which ‘generate multi-dimensional full-colour holograms’. That means it’s not going to be projecting images into a room that everyone can see. It’s cutting edge stuff, but it’s not quite that advanced yet.

In much the same way as Google’s ill-fated Glass experiment, the HoloLens will interject virtual elements onto your vision. That means it’s different to virtual reality headsets such as the HTC Vive, Oculus Rift, and Playstation VR. These VR headsets immerse you in a fully simulated world, whereas the HoloLens uses the real world as a canvas on which to overlay virtual elements. 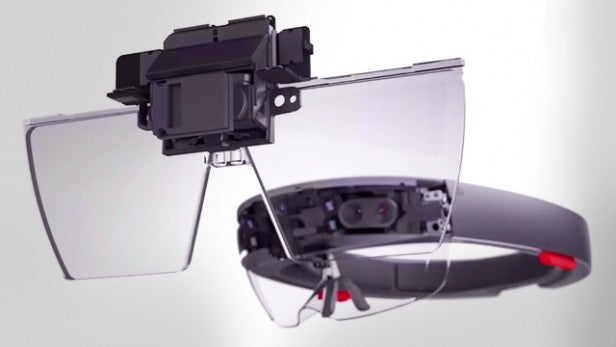 Unlike Google Glass then, Microsoft’s AR headset will create virtual 3D models that, thanks to the HoloLens’ various cameras and sensors, interact with the environment you’re in. The in-built speakers that sit above your ears create sound based upon where each hologram is in relation to your position, making for an even more immersive experience.

Under the hood, Microsoft has packed the HoloLens with a series of sensors, along with a high-end CPU and GPU, which the company claims gives it ‘more computing power than the average laptop’.

Specifically, the headset features an inertial measurement unit, an ambient light sensor, one camera for measuring depth, and four ‘environment understanding cameras’, all of which combine to process information about the environment you’re in and how you’re interacting with it. 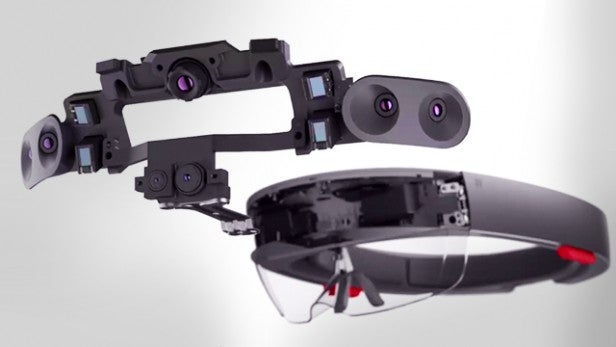 On top of that, a 2-megapixel camera allows you to capture videos and photos of your holographic exploits, while four built-in microphones will register voice commands.

When it comes to power, the HoloLens features a battery that will allow for two to three hours use and up to two weeks of standby time. You’ll also be able to use the headset while it’s charging over Micro USB.

Elsewhere, the development edition of the headset ships with 64GB of Flash memory, 2GB RAM, and Bluetooth and Wi-Fi connectivity. With Bluetooth, the headset can now be used with a new Clicker accessory, which comes with the developer edition and allows you to navigate the HoloLens interface without using gestures. Likely designed to give developers working long hours a break from using their arms, there’s no word on whether the Clicker will ship with the final version. 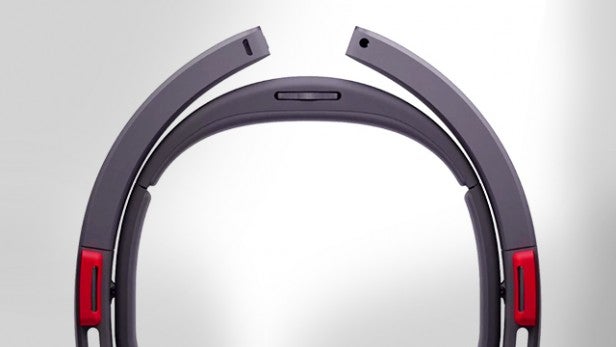 The headset is adjustable, and Microsoft says the weight has been evenly distributed for a more comfortable fit. At 579g it’s heavier than was originally expected. It’s also heavier than both the Oculus Rift, which weighs 380g, and the HTC Vive, which comes in at 555g, making the HoloLens the heaviest of all the forthcoming headsets.

Of course, the battery is necessary due to the fact that HoloLens is completely untethered, meaning you don’t need a PC or any other external hardware in order to use it. That’s a big deal considering all the Oculus, Vive, and Playstation VR have to be wired to a PC or PS4 in order to work.

What will you be able to do with HoloLens?

From the sounds of it, quite a lot. Microsoft presented some of the most interesting potential uses in a video, which you can see above. Among the most interesting, HoloLens will be able to let you view and interact with work projects such as assembling 3D models, play games like Minecraft, video chat with hologram versions of Skype contacts, and even watch live content.

An on-stage demonstration further emphasised the ability to create 3D objects, from assembling to choosing the colours, all using simple gestures that looks very Intel RealSense. 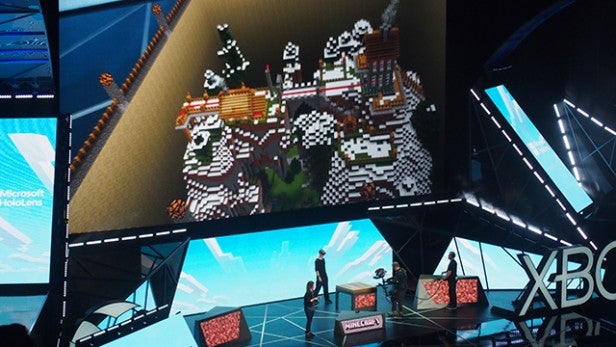 One of the most fascinating uses, at least for the folks at NASA, which collaborated with Microsoft in the making of HoloLens, is the potential to control the Mars rover Curiosity via the HoloLens. The headset will give NASA staff the ability to plant virtual flags in the terrain and work as if they’re actually on the planet themselves.

Microsoft is also partnering with other companies to use HoloLens in practical ways. Volvo is expected to bring the technology to its car showrooms where customers will be able to view different colour options for their chosen car and see safety features in action. The car maker is also expected to integrate HoloLens tech into its autonomous vehicle projects, although it remains unclear how.

At Microsoft’s 2015 Build developer conference, we got to see other ways HoloLens could be used. The company treating us to demos of physiology students exploring the human anatomy, a Raspberry Pi-powered robot with HoloLens support, and how architects can use the augmented reality elements to help construct buildings with Windows 10 at the core.

But what about gaming with HoloLens? Well Microsoft is doing that as well and the first example of what it’s calling mixed reality gaming was demonstrated at Microsoft’s E3 2015 press conference. 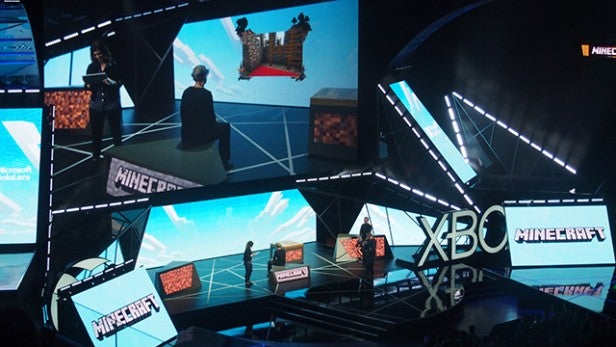 Having snapped up Minecraft-maker Mojang for a cool $2.5 billion, the first Minecraft game designed for Hololens lets you project maps onto a physical table simply by saying the words, ‘create world’. Then with your hands, you can play with items and characters. This can be done all while another player is immersed in the Minecraft world from a Microsoft Surface tablet.

An unknown wearer took to the stage wearing the HoloLens and quickly donned a wearable hologram, in the form of some kind of space blaster. He shot through one of the walls on the stage a few times, but then suddenly a crack started to appear and a mechanic alien burst through it.

The robots themselves know where the walls and furniture are in your space, meaning the gameplay is tailored to you. There’s options to change your weapons using voice commands and there’s a tonne of different enemies that you’ll come up against. 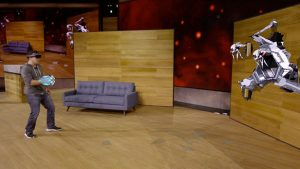 There’s clearly some exciting possibilities here and we can’t wait to see what else Microsoft has planned on the gaming front.

In late March 2016, an impressive video showcasing ‘holoportation’ appeared online. The Microsoft research video (below) demonstrated how it’s possible to use the HoloLens to teleport a 3D version of yourself into another HoloLens wearer’s field of view. Of course, the whole thing requires multiple cameras in order to work, so you’re still a long way from chatting to virtual versions of your mates in your living room. But the video was another example of how innovative Microsoft’s headset has the potential to be.

Along with the launch of the HoloLens developer edition came news of the first confirmed games and apps for the headset. Microsoft confirmed that the dev kit would come with seven pre-installed AR experiences. On the app side, there’s HoloStudio, Skype, and HoloTour, while games include Fragments, Young Conker, and RoboRaid.

In March 2016, Microsoft showed off a seriously cool new app called Actiongram, which it plans to launch in the summer. The storytelling app will allow developers to create videos featuring holographic effects for use with the headset.

Can you use HoloLens outside?

It’s looking unlikely that you’ll be able to walk down to the shops Google Glass-style with HoloLens. That’s based on the lack of outdoor use in the demonstration video and comments in a Q&A after the main Windows 10 event, where Microsoft claimed that scenarios at work and home will get most value for the innovative technology.

However, the HoloLens is “fully wireless”, which is something that Microsoft is keen to stress. There’s no wires and no PC tethering required. We want to get our hands on one of these ASAP please, Microsoft.

The good news is that Windows 10 universal apps, like the suite of Office apps, Outlook and the new Photos app, will work with the HoloLens. Additionally, Windows 10 will include the APIs to enable developers to create holograms. So there’s the potential there for those who have created apps for other augmented-reality devices like Google Glass, or virtual-reality headsets like the Oculus Rift, to make holographic experiences for Microsoft’s headset. 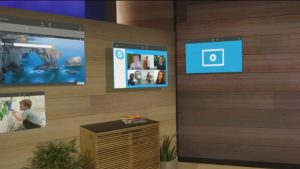 Microsoft has also revealed the Windows Holographic Platform so instead of digging through menus, you can create your own home hub, placing Windows universal apps wherever you want them. You can add new universal apps by bringing up the holographic start menu, including Skype.

If you’re using an app with HoloLens, you can say “Follow Me” to get the content to follow you wherever you move around the room. You can also size and scale any of the content windows to fill your wall or any space you choose with HoloLens.

We’ve seen videos of those lucky enough to get their hands on a dev kit streaming games and movies to their HoloLens. Footage of one gamer streaming Halo 5 emerged, demonstrating how it’s possible to move and resize a hologram of your TV screen.

HoloLens Price – How much will it cost?

There’s no talk of pricing just yet, but Microsoft did confirm in a post-announcement Q&A that it will be priced for both enterprise and consumers to get it into their home or offices. Like any first-generation technology, especially something as innovative as this, it’s not going to be cheap.

The development kit cost $3,000, so being a super early adopter comes at a cost.

Are you excited by the prospect of Microsoft HoloLens? Let us know your thoughts in the comments section below.