We went hands-on (or eyes-on) with Microsoft’s alternative to virtual reality; HoloLens.

When it was unveiled earlier this year, HoloLens was lauded as one of the most exciting and innovative things to come out of Microsoft in years. We saw examples of how it would work in the home: projecting video feeds onto your wall, allowing you to view 3D objects, have a conversation with someone over Skype as if they were right there in the room. However, E3 2015 has offered us a chance to see just how the technology might work in the gaming space.

First of all, at the Xbox press conference, Microsoft showed how one player using HoloLens could manipulate a Minecraft world while someone else was playing in it. It was hands-down the best thing that Microsoft showed at its conference, but that’s sadly all we get for now — Microsoft is not demonstrating HoloLens Minecraft to journalists at the show. Instead, it’s called on its other big gaming franchise, Halo, in order to demonstrate what HoloLens can do. The result was something akin to a ride, almost like something you’d experience at Disneyland rather than E3.

Before we went into the demo itself, a Microsoft employee came up to us in the queue and used a device to take our measurements. HoloLens needs to measure the distance between your eyes in order to work properly, so we held a binoculars-like contraption to our face in order to take the reading. Inside, there was a small light that we stared at, while the Microsoft rep put his face to the other side of the binoculars in a slightly awkward manner. This reading was then written down on a Halo-esque UNSC card with our “Spartan Optic Calibration” number (we were 63.0), and hung around our neck with a Halo lanyard.

See also: What is HoloLens? 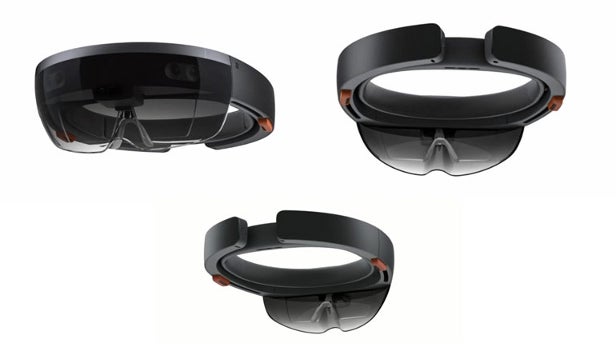 Our demo started with us going into an industrial-looking staging area, much like one of the UNSC ships like the Pillar of Autumn from the Halo games. From there, we sat down in allocated numbered seating, as if we were going to drop onto the beaches in the iconic Silent Cartographer level in the first Halo. We were told to get up, one-by-one, and put on a HoloLens each. One person would strap the HoloLens to our head, while another used a Surface tablet to input our reading. The two devices (presumably) talked to each other wirelessly to calibrate.

The HoloLens itself feels lighter than VR headsets such as the Oculus Rift and Sony Project Morpheus. It clamps along the top of the head like those two headsets do, and a similar tightening wheel mechanism helps tighten these harnesses across the back. The display, though, is much further away from your eyes, and there are no headphones built in to the headset like there are on the latest Oculus Rift Crescent Cove. Instead, audio comes out of the headset from built-in speakers. In fact, aside from a slight tint to the glass, you don’t really notice it’s there — you can just look around as normal and see and hear what’s around you.

Once HoloLens is fitted though, it starts to augment reality in some really interesting ways. Our first task was to walk down a hall to a blue marker that was hovering in mid-air. If you play video games, it’s something you’ll have done a million times before in tutorials to first person shooters. In fact, that’s a great way to describe the experience of what HoloLens does — you feel as though you’re in a videogame. When you physically walk up to the marker, you turn and see another person, and they tell you to stare at the wall. HoloLens makes it appear as if a hatch is opening in the wall, and you can see outside the ship, where one of the Halo dropships is taking off. The hatch closes and you’re ushered on. 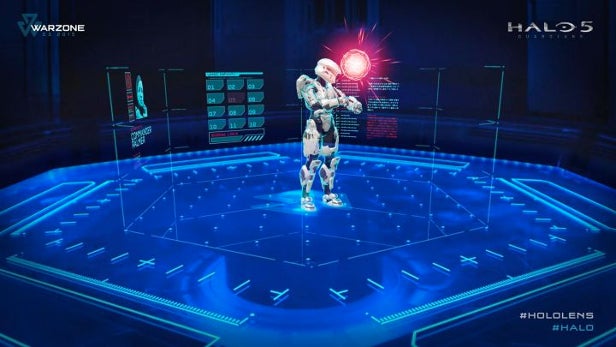 The main part of the HoloLens demo was essentially a tutorial for a multiplayer game of Halo 5 Guardians. Halo 5 has a new game called Warzone, where 24 players fight against both AI and each other to capture bases. Six of us, all member of the press or trade, gathered round a hexagonal desk — the briefing room, if you will. On the desk, a small Spartan soldier called Commander Palmer briefed us on the mission — how the game mode works, the enemies we’d be fighting, the vehicles we could use.

It was the sort of holographic briefing you’ve seen a million times before in films such as Star Wars, but it was really polished, especially bearing in mind that we’ve only known about HoloLens for a few months. Everything ran really smoothly, the graphics were excellent, and it gave us a good demonstration of exactly what HoloLens is capable of.

There were some issues, though. This was a hands-off demo — we didn’t have a controller and couldn’t interact with the demo in any way. The graphics were also quite simple — think wireframe models, rather than the immersive worlds created by current VR headsets. But perhaps the weirdest thing was how small the Hologram portion of the headset was. It feels almost like a postcard-size view in front of you — only just big enough to cover the area where the Halo briefing was appearing. It was easy to move your head and cut off part of the briefing, which really took you out of the experience.

First Impressions
Overall, then, the Halo HoloLens demo was interesting, but the Minecraft game demo looks like the more impressive demo overall. Thankfully, Halo 5 Guardians multiplayer was an absolute blast, and looks to be shaping up really nicely. There’s no release date, price or even platform announced for HoloLens, but keep an eye on TrustedReviews for more as we have it, as well as our ongoing E3 coverage.