What is the Surface Book?

Microsoft’s Surface range of tablets has steadily been growing a following since the US powerhouse started shipping the devices in 2012.

The 2015 Microsoft Surface Pro 4 offered top-end specifications within a neat portable design and is, in my opinion, the ultimate productivity tablet at the moment. However, its usability as a laptop is marred by its lack of a dedicated GPU and bundled keyboard – the Type Cover keyboard accessory still costs over £100 more.

The Surface Book, on paper, fixes these flaws, and is being marketed by Microsoft as a laptop first and a tablet second. But with pricing for the most basic version starting at £1300, can it justify its hefty upfront cost?

Update: Since my original review, some of the software issues I encountered have been solved through various patches. However, because I don’t have a Surface Book to test them out on, I can only point you to the Microsoft Surface Book update history page to see what Microsoft has been up to.

Most recently, Microsoft has launched its brand-new Surface Laptop, which is now the the cheapest way to get into the Microsoft laptop ecosystem. With a soft-touch fabric keyboard tray and an attractive design starting at under a grand, it’s looking very tempting. It’s not a replacement to the top-end Surface Books with dedicated graphics chips, but it does seem like a better value choice than the lower-specification Surface Books.

My original review from February 2016 continues below.


Check out our video review of the Surface Book

Since the Surface Pro 3, Microsoft’s really come into its own on the design front, which is why I’m pleased it hasn’t rocked the boat too much with the Surface Book.

From a distance you’d be forgiven for mistaking the tablet section of the Surface Book for the Surface Pro 4. The device’s chassis is built of the same grey magnesium, with the only obvious design feature being a shiny Windows logo on its back.

Up close, however, you’ll notice a few key changes. For starters, it’s a little larger than the Pro 4, measuring in at 7.7mm thick and 312 mm wide – dimensions that place it in roughly the same size bracket as a 13-inch Macbook.

Microsoft’s also ditched the Pro 4’s kickstand to make way for the Surface Book’s biggest feature – its detachable keyboard dock. Unlike past Surface models, the Book comes bundled with a full-on physical keyboard, not relying on an optional Type Cover. 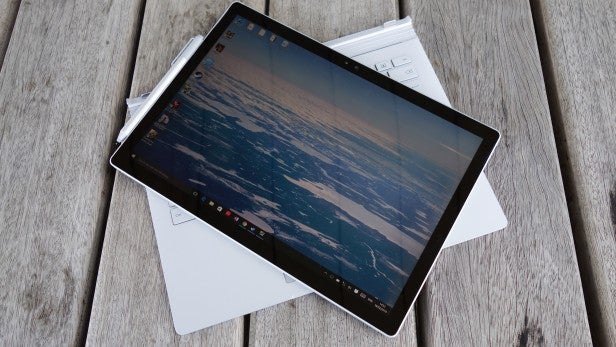 The dock also houses the Surface Book’s primary battery and the lion’s share of its ports – a point that further emphasises the focus on being a laptop first, tablet second. Ports-wise, the Surface Book is pretty well stocked when you consider its tiny dimensions. Along the dock’s sides you’ll find two USB 3.0 ports, an SD card reader, a Mini DisplayPort, a headphone jack and a proprietary charging socket.

The sleak dimensions and wealth of connectivity options make the Surface Book feel unashamedly premium and, in my mind, one of the nicest-looking convertibles around.

The physical keyboard is another neat addition. I personally didn’t have an issue with the Surface Pro 4’s Type Cover, but understand many did. For starters, the Type Covers are paper thin and aren’t weighted, which meant using a Pro 4 on your lap is something of a balancing act. Many people also didn’t click with the touchpad, feeling they were too small and slightly unresponsive.

By comparison the Surface Book’s backlit keyboard is an entirely physical, metal affair, more akin to Asus Transformer Books’ docks than past Type Covers. The keyboard is a definite step up and offers a significantly improved typing experience. This is largely down to the keys’ improved travel and spacing. 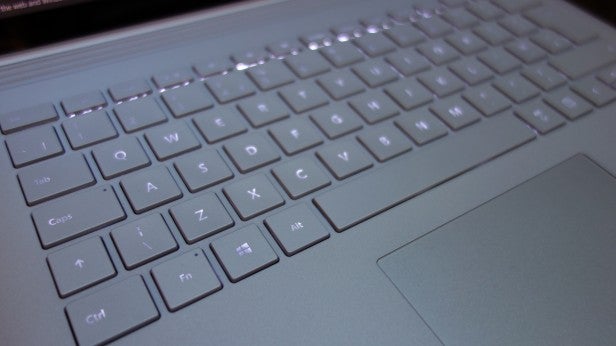 The more comfortable typing experience is aided by the Surface Book keyboard’s intelligent hinge. The hinge has been designed to evenly adjust the Surface Book’s weight balance to ensure it doesn’t become top heavy, irrespective of the screen’s angle. The design works a treat and means it’s one of the most lap-friendly convertibles around.

My only issue with the keys is that they aren’t quite as tactile as I’d like, compared to, say, the Asus Transformer Book T300 Chi or Dell XPS 12. With prolonged or rapid typing the keys feel a little spongy and aren’t quite as reactive as I’d like – though, being fair to Microsoft, this is an issue I have with most laptops and convertibles.

The trackpad’s also been improved. As well as being larger, the glass-finished pad feels more responsive and accurate than its Type Cover siblings. Two finger gestures work a treat and in general I have no issues using it.

For general consumers the screen is brilliant. The 3,000 x 2,000 resolution and 267ppi pixel density mean icons and text are constantly sharp. Brightness levels and viewing angles are stellar and I didn’t notice any backlight bleed.

Cracking out my trusty colorimeter, I found the Surface Book’s screen also to be well calibrated. The 1,750:1 contrast ratio I recorded is great and means the screen can display suitably nice deep and inky blacks alongside clear, unmuddied whites. 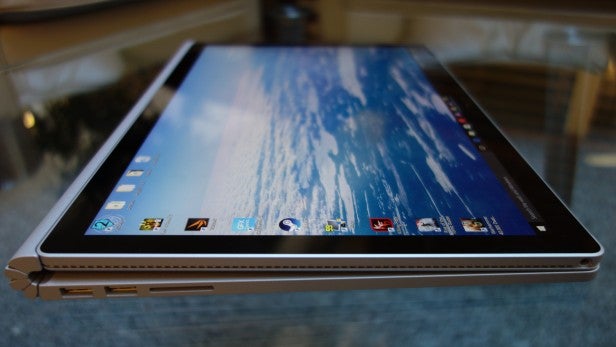 The 6,377K colour temperature I recorded is less than 200K away from the 6,500K ideal – meaning colours don’t look overcooked or too cool to the naked eye. The Surface Book’s 0.19 Delta E is stellar – any score floating around or below 1.0 indicates excellent colour accuracy. The screen’s 94.3% sRGB colour gamut coverage is above average, and more than wide enough to meet general users’ needs.

Being fair, Microsoft’s never made any claims about the Surface Book’s Adobe RGB coverage, but when you consider the fact that it’s marketing the device as “ideal for creatives” I’m still a little disappointed. Hopefully Microsoft will fix this issue with its next wave of Surfaces.