Anthem has had a launch to forget, with various bugs wreaking havoc with the game and sales figures failing to meet expectations. However, the news that Anthem can now finally use DLSS is great news indeed.

DLSS is Nvidia’s new technology which is exclusive to RTX graphics cards such as the RTX 2060, RTX 2070, RTX 2080 and RTX 2080 Ti. By using the power of artificial intelligence, DLSS is able to alleviate the workload on the GPU and consequently boost the game’s performance along with the frame rates.

An update has arrived today (27 March 2019) to enable the DLSS feature in Anthem. This means that Bioware’s sci-fi shooter is only the third game to actively feature DLSS, following Battlefield 5 and Metro Exodus.

How much of a boost does DLSS give Anthem? Nvidia claim you’ll see a performance increase by up to 40%. Using a rig with an Intel Core i9-9900K @ 3.6GHz processor with 32GB RAM and settings cranked up to the max, Nvidia says it saw the average frame rates of 51.8fps jump up to 69.9fps while playing in 4K with DLSS enabled – that’s a whopping 18.1fps increase. 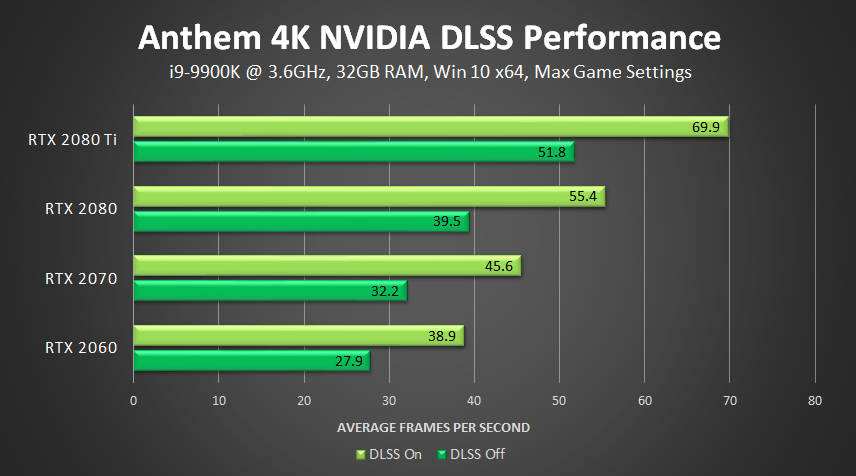 The unfortunate bit of news though, is that DLSS won’t work for Anthem in Full HD. Nvidia has strangely been blocking DLSS when frame rates are already sufficiently high enough, but this is the first time DLSS has been totally inaccessible to HD gamers no matter the RTX graphics card. This is a great shame, especially if you have a Full HD gaming laptop.

To make matters worse, only select RTX cards will allow Anthem players to use DLSS at a 2560×1440 resolution. If you’re planning on playing Anthem in 4K though, then DLSS shouldn’t be an issue. Confused? Us too. At least Nvidia has helpfully listed what RTX cards will work with DLSS at the various resolutions:

Full HD gamers aren’t missing out too much though, as DLSS isn’t working as smoothly as it could be right now. Nvidia asserts that using DLSS shouldn’t negatively impact the image quality, but many RTX users have reported a loss of clarity with DLSS is activated. It’s too early to say whether this issue is also prevalent with Anthem, but fingers crossed Nvidia has gone some way to resolving this issue.

While the DLSS update is now here, there’s sadly still no word on ray tracing. This revolutionary new feature is expected to drop in the coming months, but Nvidia has been quiet on confirmation or dates. Once we hear anything new, we’ll be sure to keep you updated.

Related: DLSS on Full HD displays: Will the RTX 2080 ever support it?

How to activate DLSS in Anthem

If you’re lucky enough to have a graphics card and monitor that supports DLSS on Anthem, Nvidia has also conveniently listed the instructions on how to activate it:

Are you annoyed DLSS won’t work when playing Anthem in Full HD? Let us know on Twitter @trustedreviews.