Anthem is a strange, flawed adventure with glimpses of greatness buried behind an abundance of obtuse design decisions. What so many players love about Bioware is here, but fragmented in such a way that it becomes unrecognisable.

After a tumultuous demo period, many have been left wondering if Anthem will be a ‘make or break’ moment for Bioware. Mass Effect Andromeda crashed and burned and led to the studio shelving the franchise. Anthem lingers on a similar precipice, prepared to penetrate the shooter market with an experience to rival the likes of Destiny and The Division.

To be blunt and straight to the point, from what I’ve seen it doesn’t succeed. Much of Anthem is spent trawling through obtuse design decisions to experience limited pockets of exquisite gunplay and exploration. Despite launching in the shadow of its competitors, Anthem doesn’t seem to have adopted any quality-of-life changes that make them so appealing.

In its current state, the majority of my time is spend sitting at loading screens, navigating a muted hub or voicing frustration at a strange matchmaking system. One of these little problems wouldn’t be a nuisance on its own, but all of them compounded together leaves us with an experience that requires a lot of patience to play. It’s a huge shame, since the core of Anthem is delightfully innovative. 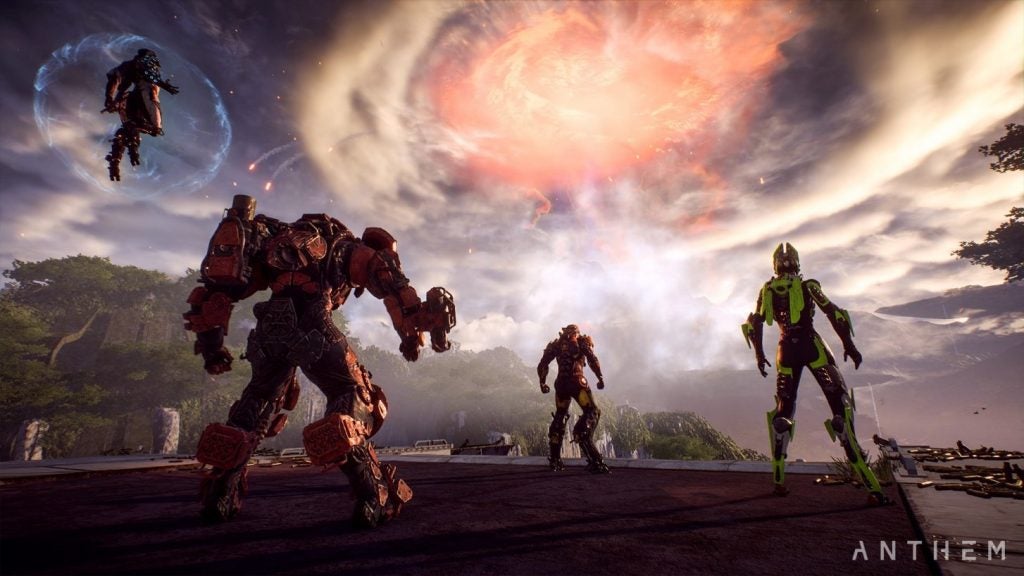 Javelins are a joy to pilot, with plenty of incentive to experiment with each class.

Set in a dystopian future, humanity finds itself closed behind a towering wall inside the Fort of Tarsas. You are a freelancer, wielding superhuman exosuits known as Javelins that allow you to venture into dangerous plains beyond the wall. You use these as an opportunity to complete contracts, building relationships with factions before facing off against a host of unworldly threats.

Anthem does a compelling job of establishing the mythology of its world and the stakes you’re fighting for in the opening minutes, but this ultimately falls to the wayside as you progress through the mutedly serviceable narrative. Bioware’s signature storytelling is here in the form of characters you can converse with in-between missions, but the dialogue choices are meaningless.

Sure, you’ll gain a bit of experience for select factions, but nothing has an impact on the events to come, and if they’ve little of interest to say, it’s tempting to skip things altogether. I never did, with personalities like Owen and Tarrow giving sufficient life to their worlds thus far, even if it’s often buried inside exposition thrown out amidst chaotic firefights.

Anthem desperately needs room to breathe inside its blueprint formula, lacking the hallmarks you’d expect from Bioware as it seems laser-focused on emulating the shooter design that’s proven so popular in today’s market. It can feel heartless, like the core idea was designed in a boardroom instead of the minds of passionate creatives with a worthwhile tale to tell. 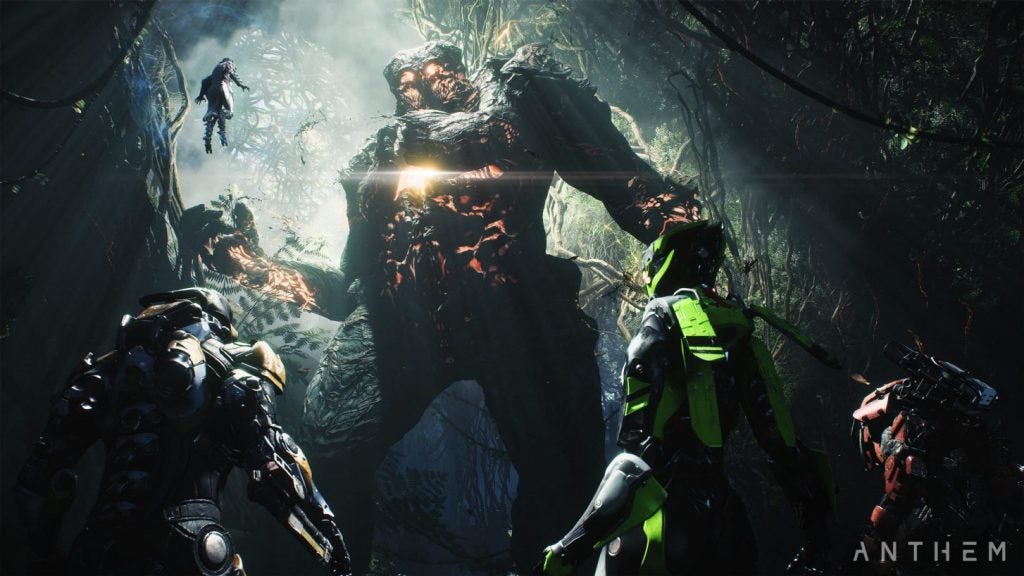 Combat and traversal is where Anthem shines, even if you’re limited to relatively bland encounters to express them. Javelins are wonders of design, split into four distinct categories – Ranger, Colossus, Storm and Interceptor. They’re all diverse in their appearance and abilities, and I had a genuinely great time switching between them and curating personal loadouts for each one.

Ranger is the standard Javelin, acting as a competent all-rounder perfect for most encounters. While its powers aren’t the most thrilling, it’s essential to have one in your squad. Colossus is far heavier, capable of pounding enemies into the ground with metallic fists before firing away at them with a ferocious cannon. However, its increased weight makes flying slower and more intensive on resources, so there’s a trade-off to be had here.

The quartet of Javelins all function in this way, providing the player with a plate of positives and negatives they must weigh up, finding a model that perfectly fits their style of carnage. The Interceptor’s immense locomotion is wondrous, although it’s vulnerable to physical damage. Storm can dish out lashings of lightning but won’t last long in a solo firefight. There’s decisions to be made here to play into the squad dynamic quite effectively.

Anthem sets an excellent first impression, with the opening duo of missions presenting a sense of gargantuan scale. The world before you is teased with gorgeously breathtaking vistas and the freedom to manoeuvre around them with weighty, responsive flight mechanics. A few button presses have you soaring into the air, free to ascend to the heavens before hitting an inevitable wall.

Diving through ravines and the tightening cracks of cliffside ruins is an unparalleled joy, that’s lent a layer of strategy through potential overheating. Like Icarus, soaring for too long will leave you burning up. To remedy this, you’ll need to pass through waterfalls and skim lake beds as you fly past. 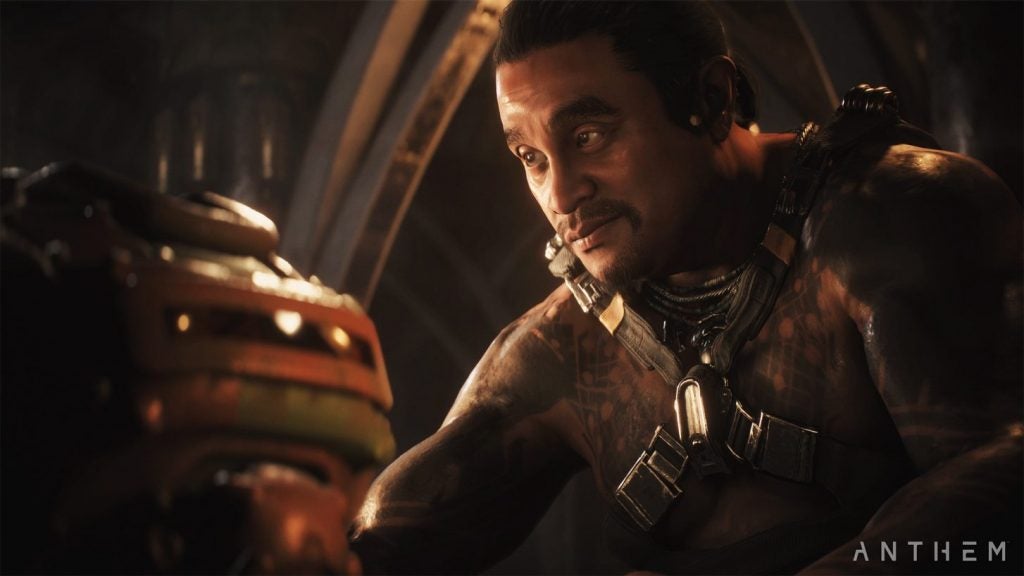 Anthem is filled with colourful personalities, yet they rarely impact the overall story

Gunplay is fiercely bombastic, awash with colourful explosions and bouts of impressive agility as you pounce around dispatching bad guys. It feels excellent, building upon one of the finest qualities of Mass Effect Andromeda with heavy, responsive feedback. Each Javelin plays differently enough to warrant experimentation, that is if you’re willing to dedicate enough time to replaying missions and kitting them out.

Customisation in Anthem takes an obvious cue from Destiny, with each Javelin building up a higher power level dependant on the items you’ve equipped. These range from weapons to special abilities such as grenades and temporary shields to protect allies. Providing each Javelin with a bespoke colour scheme and constantly changing skills is oftentimes fascinating, a level of investment that goes beyond anything else Anthem has to offer.

It’s a crying shame that so many fantastic mechanics are held behind such bland moment-to-moment missions. 10 hours in, they all follow the same template of pursuing objective markers, wiping out enemies and exploring the environment for something to activate. It feels like the boring objectives Destiny launched with back in 2014, and things have changed for the better since. 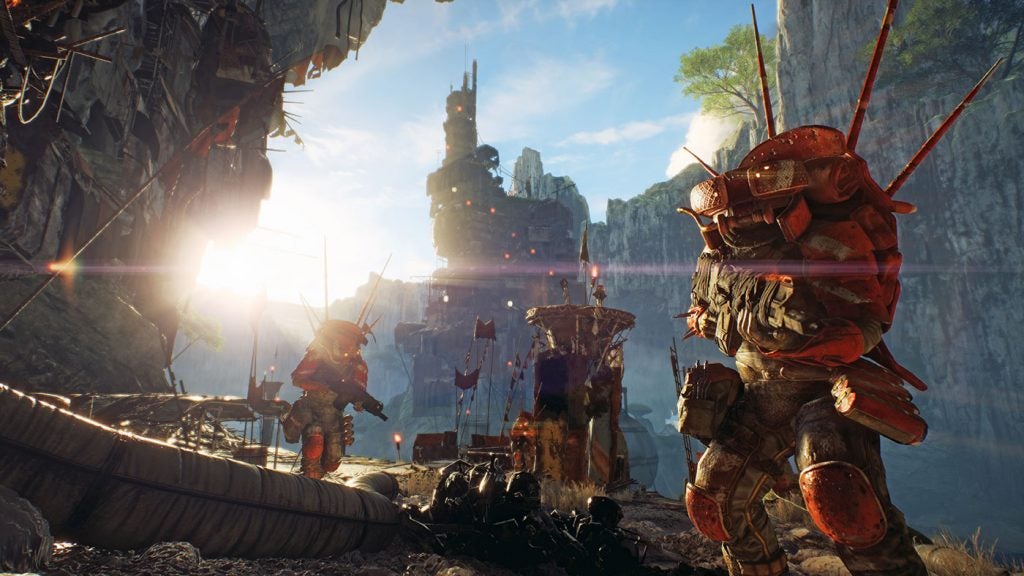 Anthem shows potential in its endgame, but this is squandered by an underwhelming climax and unexpected grind you’re required to power through in order to progress. Bioware has since patched things ahead of release to alleviate these issues, but given players have had access to its blockbuster shooter for over a week, it feels a little contentious to call it a ‘day-one’ update.

Strongholds are larger, more ambitious missions which feel similar to Destiny’s Strikes as you and a group of friends tackle sprawling battlefields packed with enemies to contend with. Sadly, there’s only a few of these in the entire game and they’re filled with the same boilerplate cannon-fodder you’ve been fighting for the past several hours.

At one point, you’re teased with the possibility of exploring four ancient tombs integral to Anthem’s lore. I was thrilled, was I finally about to delve into massive, multi-tiered dungeons with my squad to conquer an array of intense encounters and puzzles? Nope. They’re little more than a room where you stumble inside, hold a button and watch things unfold. It’s immensely dissapointing, especially given what Anthem could’ve been.

As a live-service shooter, I’m curious yet concerned about the future of Anthem. Despite its visually marvelous environments, they simply don’t feel varied enough to accomodate new stories, missions and adventures with friends. Things could change for the better, but my problems with Anthem go beyond things potentially remedied by months of post-launch updates. At its core, Anthem simply fumbles.

Anthem is a strange flawed adventure with glimpses of greatness buried behind an abundance of obtuse design decisions. What so many players love about Bioware is here, but fragmented in such a way that it becomes unrecognisable.

The core of Anthem – being its fearsome gunplay and angelic flight mechanics – are stellar, yet they’re held back by the mission structure that dictates them. Things could certainly improve with the introduction of deeper dungeons and endgame content, but right now Anthem is sadly underwhelming; a victim to the template it’s trying so hard to emulate.