DLSS – deep learning super-sampling – is an advanced anti-aliasing technique which helps to produce a high-quality image without being as taxing on the GPU as traditional methods would.

By alleviating the burden on the GPU, DLSS enables the processing power to be used more efficiently, resulting in a frame rate boost. DLSS is currently exclusive to Nvidia’s 20 Series of graphics cards, which include the likes of the RTX 2060 and RTX 2080 Ti. This is because it leans on the newer GPUs’ Tensor cores, which are dedicated to handling AI-based processes, like DLSS.

DLSS is particularly important for ray tracing. Without DLSS, activating ray tracing in a game will see frame rates drop by as much as 50 frames per second, depending on your rig and the settings you’ve got the game running on.

Seen as a magic bullet for ray tracing by counteracting the frame drop, DLSS has been highly anticipated since its reveal, but there are some pretty big caveats here. At present, not every 20 Series card out there can support ray tracing and DLSS at every display resolution.

For example, if you’ve got an RTX 2080 card and DLSS turned on while connected to a 1080p Full HD monitor you won’t notice a difference – yet you won’t find this issue with a 1440p or 4K display though.

This is perhaps not a huge issue if you’re putting together a new gaming rig since it’s easy enough (although costly) to upgrade to a Quad HD or 4K monitor. But if you’re looking at a gaming laptop – most of which feature 1080p displays – there isn’t really a straightforward remedy. In theory, you’ll be able to connect to an external monitor via DisplayPort, HDMI, or Thunderbolt and enjoy DLSS that way, but doing so essentially defeats the whole point of a portable computer.

All of this confusion means that buying the most powerful GPU available is no longer straightforward. You’ll want to check in how the landscape currently looks if you’re interested in ray tracing, especially if you’re thinking about picking up a new gaming laptop with a 20 Series card.

Which Nvidia graphics cards support DLSS at which resolutions?

Nvidia currently supports DLSS on the following 20 Series GPUs at these resolutions:

The good news is this appears to be a temporary situation. On an article titled ‘NVIDIA DLSS: Your Questions, Answered’, Nvidia’s technical director of deep learning Andrew Edelsten explained DLSS delivers the most noticeable improvement in 4K, so that’s where the focus has been so far. However:

“For the next push, we are focusing our testing and training to improve the image quality at 1920×1080 and also for ultrawide monitors (e.g. 3440×1440). The current experience at these resolutions is not where we want them.”

During a recent media call where Nvidia announced ray tracing features are headed over to older and less powerful GTX cards, I asked Justin Walker (product manager for GeForce desktop GPUs) for an update on the DLSS fiasco. Walker wasn’t able to give us a wider time frame other than ‘coming when it’s done’ but reiterated what Edelstan said:

“We’re still working hard on DLSS and we’re still developing it. We want to see it on more games and at more resolutions. We fully expect to expand the functionality of DLSS.”

Nvidia says that DLSS kicks in when the load on a GPU is high, and that it will only be made available if it’s beneficial to the player. The game you’re playing may come with a ‘DLSS on/off’ option and you may even be able to turn it on – but it won’t necessarily do anything.

At the moment, RTX 2080s, the Max-Q variants found in gaming laptops like the Razer Blade 15, and RTX 2080 Ti’s are deemed to be powerful enough to run ray tracing at 1080p without the need for DLSS to help pick frame rates up.

That’s the theory, and it bears out in practice too. However, there’s a catch.

In his review, Trusted Reviews‘s Ryan Jones ran Metro Exodus on an RTX 2080 configuration of the Razer Blade 15, with DLSS turned off and on – he recorded identical frame rates for both tests. However, when the same game was played on an RTX 2070 version of the same laptop, we saw something interesting with DLSS activated – a jump of over 20 frames-per-second, putting it above what the RTX 2080 model achieved.

That’s arguably fine if you’re gaming on a laptop with a 60Hz display, as you won’t see the benefit, but with laptops equipped with Full HD 144Hz panels – like the Razer Blade 15 – you’re missing out on a significant performance boost. 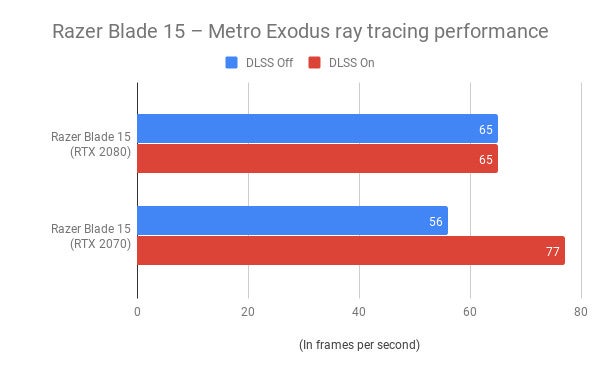 So while RTX 2080s and RTX 2080 Ti’s connected to Full HD panels are technically good enough to not need DLSS, we’re currently in a situation where buying a laptop with a RTX 2070 GPU might be the smarter option – all because of the frame rate boost you get with DLSS, not to mention the cheaper price.

As we get more gaming laptops with RTX 2080 and RTX 2070 GPUs in for review, we’ll test them side by side to see if this trend continues.

Why Nvidia has allowed this anomaly to persist for so long? This is probably due to the numerous DLSS issues reported by gamers across the web. While Nvidia claims DLSS will render images at the same visual quality as traditional rendering techniques, that doesn’t actually look to be the case. Many have reported a loss in image clarity when DLSS is activated, which would explain why Nvidia seems so keen to disable the feature when it isn’t essential for performance.

Nvidia will almost certainly be in the process of looking for a fix for DLSS. Until a solution is found, it’s likely Nvidia will be reluctant to start rolling out full DLSS support at every resolution. After all, what’s the point in a frame rate boost if it compromises the visuals?

Will DLSS be enabled for 10 Series GeForce GTX cards and the new 16 Series cards?

No. DLSS has been built to leverage the Turing architecture, and while the new GTX 1660 and GTX 1660 Ti cards are based on the Turing design, they lack the dedicated Tensor cores required to power DLSS.

Edelsten says as much: “We built DLSS to leverage the Turing architecture’s Tensor Cores and to provide the largest benefit when GPU load is high. To this end, we concentrated on high resolutions during development (where GPU load is highest) with 4K (3840×2160) being the most common training target.”

This is another point that Walker highlighted in last week’s media call – when asked about Crytek’s ray tracing demo on CryEngine 5.5, Walker said: “[DLSS is] simply not practical on non-Turing [cards]. Without Tensor cores, DLSS will not accelerate your games. There’s no reason to use it.”

When will DLSS be fully enabled for RTX 2080-based systems outputting to a 1080p display?

Currently, we don’t know – at the time of writing, Nvidia wasn’t able to comment any further.

We do know that a driver update to bring ray tracing features to 10 Series GTX cards and the newer 1660 and 1660 Ti cards is due for release in April. Perhaps we’ll hear more about the DLSS fixes shortly after that.

What do you think about DLSS? Will you be more reluctant to buy an RTX gaming laptop  because of this? Let us know on Twitter @TrustedReviews