The handset comes with a skinned version of Android 5.1 Lollipop. Much like the somewhat bizarre physical design choices, this is another area where the Axon Mini tries to separate itself from the crowd. Continuing the theme established by the phone’s case, of seemingly unrelated elements being thrown together for no reason, the standard lock screen is a charmingly inexplicable underwater vista complete with animated tropical fish.

Once you get past the aquatic introduction you’ll be confronted with one of the least appealing themes you’re ever likely to see. Somewhere between steampunk and the in-game menu design for some awful RPG, the standard theme makes all your app icons gold and black. You can change it easily using ZTE’s quick-access menu which is accessed by tapping the three-dots icon on the standard Android home/back menu bar. From here you can change the overall OS theme colour, wallpaper, and home-screen switching effect. You can also change the offensively bad icon design but you’re still limited to three of ZTE’s preferred themes. 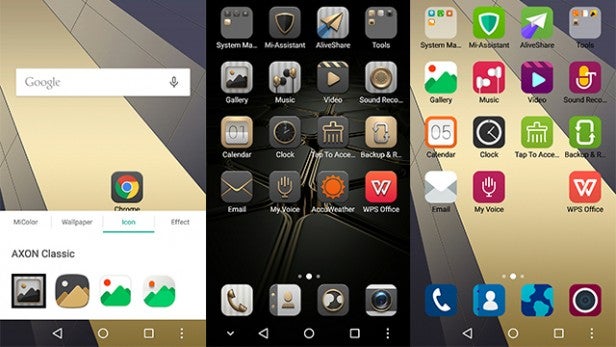 It would have been nice to have the option to simply use the standard Android icon designs. The closest you can get is using one of ZTE’s presets which places the standard icons inside a black square. Even with its idiosyncratic range of new customisation options then, ZTE’s approach makes OS customisation feel slightly constricted.

The skin extends to several other areas, with the settings menu and keyboard both taking on a new guise. You can change the keyboard back to the Android standard fairly easily, which you probably will do as the ZTE version is, like the phone, full of extras you won’t use.

In terms of bundled software, ZTE has loaded this thing with its own apps. You have various types of bloatware, ranging from a suite of system management tools, to Mi-Assistant, something called AliveShare, a Music app, a backup app, an email app, and a general cavalcade of superfluous programs. There’s even something called Mr Handwriting, which you will discover on opening is entirely in Chinese, rendering it useless to most of us. And of course, ZTE would be remiss if they weren’t to include the standard piano playing app. Fear not, it’s here. Considering only 22GB of the handset’s 32GB storage is available, the decision to include these types of programmes really does make you wonder what’s going on at ZTE towers.

All the Google apps, which do exactly the same stuff as the ZTE ones, are grouped together in a folder on the home screen, so on startup it’s a case of unpacking all the icons and arranging them in place of ZTE’s own apps. 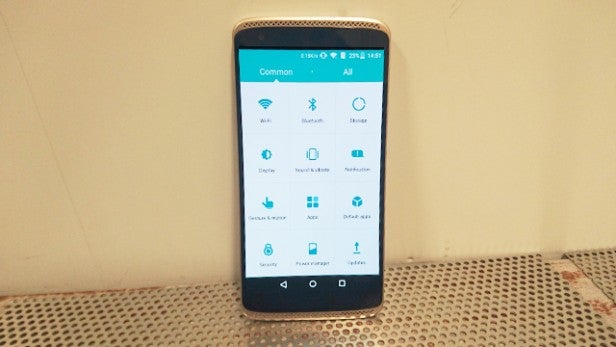 The absence of Android’s app tray was another annoyance. The Axon Mini does away with this option, leaving you to rely entirely on your home screens for access to apps. It sounds like a negligible omission, but somehow it makes the Android experience feel a bit limited.

There’s also the Mi-POP function which is designed to help with one-hand operation. It brings up a small set of floating icons which let you perform quick actions like going back, seeing all open apps, and going home. I turned it on but found it more annoying than helpful. The icons are easily movable but the phone itself is small enough to use the menu bar at the bottom of the screen for these functions without having floating stuff getting in the way of the display itself.

The non-removable Li-Ion 2,800 mAh battery does a decent job of keeping the Axon Mini going. With casual use and the screen brightness set to 50%, the handset lost around 4% of its charge per hour. That means you’ll get close to 30 hours casual usage from the Axon Mini. Casual use involved listening to music, sending texts and emails, sporadic web browsing and general phone stuff.

Even with more intense usage the phone will probably last you a day, and when it comes to watching movies, the Axon Mini lost around 14% battery consistently streaming with the brightness at 50%. So that’s a good seven hours of viewing time, and more if you dim the screen. 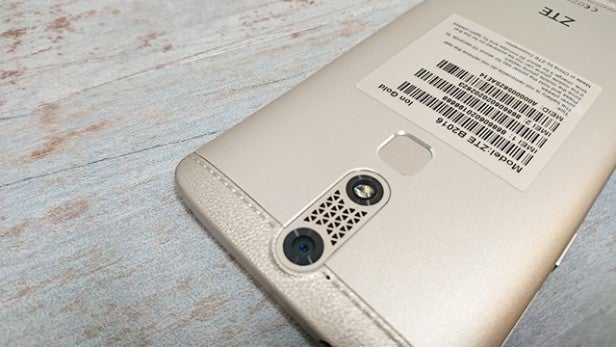 Charge times aren’t bad either. The phone went from 0% to 100% in almost exactly two hours which is about right for a handset such as this.

The battery itself is also pretty generous for a phone this size. The OnePlus X comes with a slightly smaller 2,525mAh power pack, while the Moto G has an even smaller 2,470mAh battery. Not that it will make much difference as all these phones will last for around the same time on a single charge.