Resistive touchscreens are seen as old hat nowadays thanks to the dominance of finger-friendly capacitive touchscreens. However, this has had the side effect of doing away with the good old stylus. If you miss days of writing on a screen with a pen-like prodder, the Wacom Bamboo Stylus for iPads could be £25 well spent.

Capacitive screens don’t respond to standard styli, because they sense conduction rather than pressure. Our fingers conduct, but an inert piece of plastic doesn’t, and so is effectively invisible to a capacitive touchscreen. This is the tricky task ahead of the Wacom Bamboo Stylus – to convince a capacitive touchscreen that it’s a finger, not a stylus.

It does this with a springy rubber teat that sits at the end of a high-quality metal pen. Feeling like a cross between rubber and skin, this nipple is your writing and drawing tool, and the only part of the stylus that a capacitive touchscreen will repond to.

The pen dismantles like a high-quality fountain pen, with a screw-on nib to keep the rubber nipple in place and a screwn-in end cap to hold the belt clip. Other capacitive styli we’ve tested have had the air of a throwaway accessory – understandable when most people are perfectly happy using their fingers, a feature built into most humans – but this one doesn’t. It’s classy, extremely well-made and worthy to stand up next to Apple’s iPad 2.

More importantly, it’s also weighted properly.  There’s a slight bias towards the front of the pen and it feels great in-hand – again, like a high-quality fountain pen. If you don’t mind losing some of that traditional pen look, you can leave out the shirt clip as the end cap screws in further, turning the stylus into a near-seamless cylinder. In tech terms it’s as simple as they come, but its two-tone design adds beauty to this simplicity. 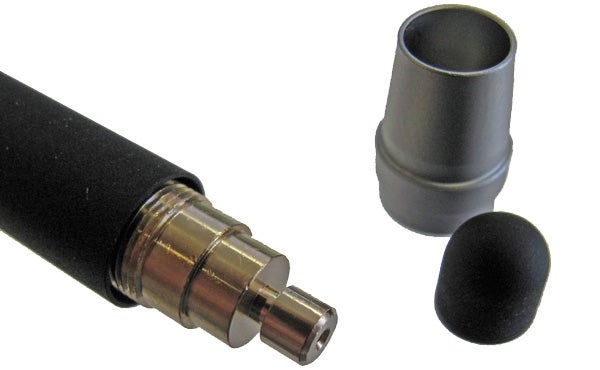 The capacitive nubbin is replaceable, fitting over a little metal head at the end. Wacom doesn’t currently seem to sell replacements from its own webstore, but we’ll imagine they’ll filter through in time. As the whole pen package costs just £24.99, they won’t be able to charge too much either.

Although Wacom says that the Bamboo Stylus is “for iPad”, it’ll function with any capacitive screen device. There are no fancy inner workings here to make it function particularly well with the iPad in particular – just the little capacitive bubble on the end.

However, the touchscreen sensitivity of iOS devices, including the iPod Touch and iPhone series, makes an excellent pairing with this tip. Using other, less sensitive, devices like the HTC Legend we found that the screen would occasionally miss lighter prods. Some degree of force is still required with an iPad, but it’s consistent. Just grazing the Bamboo stylus along the surface won’t register – apply the tiniest bit of effort and it will though. 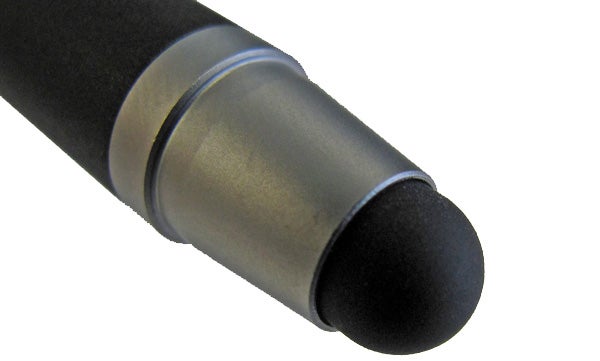 The tip of the pen is firmer than the skin of the average fingertip, so with a light touch the contact surface area is very small. As the tip is a hollow, balloon-like semi-circle, you might expect accuracy to be compromised by the squidgy tip, but it’s remarkably reliable.

The iPad’s capacitive screen registers the centre of the surface area of the tip as the point of contact, so while there’s some give in the way the stylus interfaces with the screen, it always feels reliably pen-like. There’s no magic going on behind the scenes though – this stylus won’t turn your iPad into an Intuos4. The stylus houses no circuitry, magnets or electronic bits. It’s basically a stylish home for the nib to perch on top of. Indeed, despite the nib flexing to form a larger or smaller surface area the harder you press, this doesn’t result in a change in the thickness of line produced – it just feels nice. 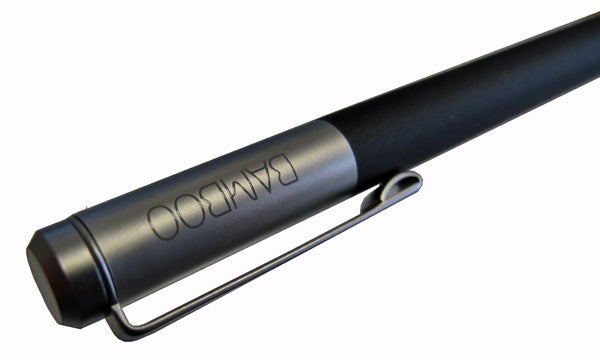 This is reflected in the very reasonable price tag though. The Bamboo stylus is an accessory that alters your experience of touchscreen operation, rather than adding features or fundamentally changing the way it actually works.

It’s particularly useful for writing words rather than painting – which works surprisingly well with a finger alone. Wacom seems to think so too, judging by its dedicated Bamboo Paper iPad app. This notepad app lets you scribble away on virtual lined paper, and uses some clever software trickery to alter the behaviour of the pen’s output depending on how fast you scrawl away. Like the pen itself, it’s designed to make writing feel natural and “real”. 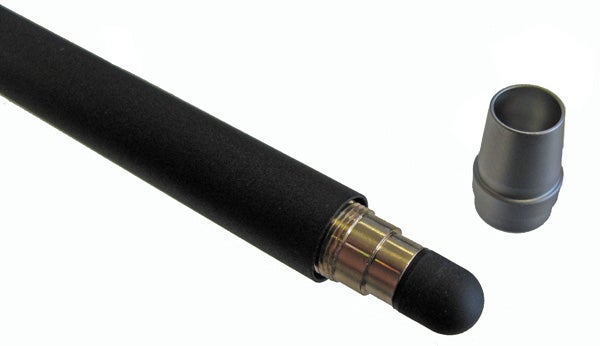 As pleasant as it is to use, you should still ask yourself whether the Bamboo will fit into your everyday iPad usage – bearing in mind that there’s no elegant way to keep the two together. If you just want to dip your toe into the world of the capacitive stylus, the Griffin alternative sells for as little as £8.99, but the build quality brilliance of the Wacom makes this worth the extra cash if you’re sure it won’t end up gathering dust within a week.

The Bamboo Stylus supplies an impression of increased accuracy and fidelity rather than the real thing, but when the experience of using it is so positive – and the price so reasonable – we don’t really care. As the iPad’s capacitive screen is already so finger-friendly, the audience for this stylus is likely too limited, but it makes freehand writing feel far more natural than with a finger.