What is the Ubiquiti AmpliFi Mesh Wi-Fi System?

The Ubiquiti AmpliFi is a mesh networking kit, designed to provide excellent Wi-Fi coverage through the use of multiple Wi-Fi nodes that you can place throughout your home. It kit comprises a base router and two Wi-Fi extensions, known as mesh points.

Like all mesh networks, the key appeal of the AmpliFi is twofold. First, there’s the simple way in which the different components of the system work together to extend and manage your Wi-Fi network without any need for complicated setup.

Second, there’s the fact that despite using multiple Wi-Fi devices, each of which has two Wi-Fi bands, you don’t ever have to worry about connecting to each band separately. The system takes care of everything.

The AmpliFi is a simpler take on the concept than some, but it has a few unique features of its own too.

Ubiquiti was one of the first companies to really push the idea of mesh networking, and it’s been offering a range of very capable solutions for several years now. However, the majority have been aimed at the business end of the market, and as such have required a degree of expertise to set up. The AmpliFi’s focus is on continuing to provide the level of performance for which the company is known, but in a far more user-friendly package. 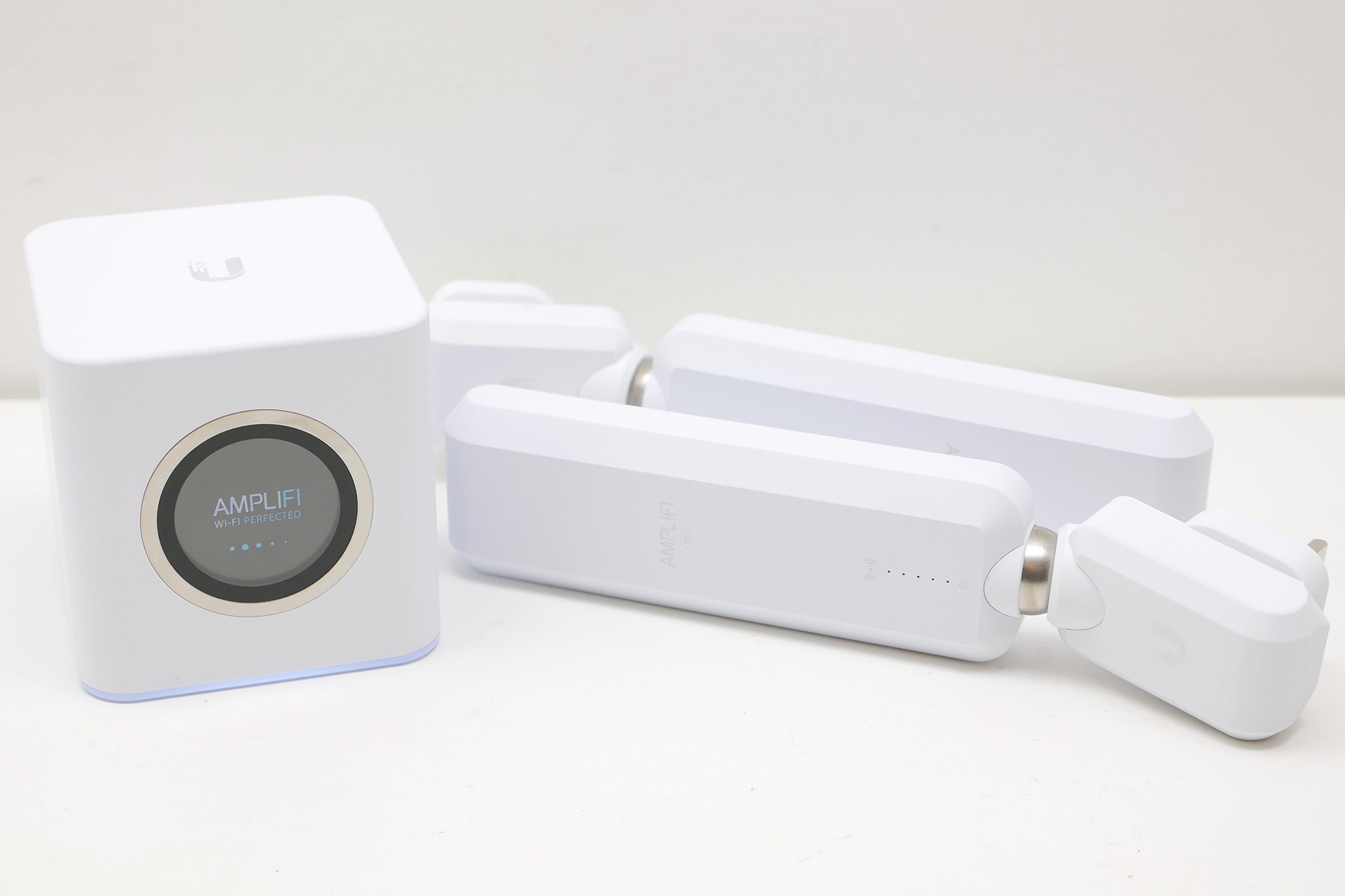 The standard AmpliFi kit consists of one router and two mesh points, but you can also buy each component separately. Moreover, you can add extra mesh points to the standard kit, so if your home is large enough to require, say, five mesh points then you can just buy an extra three.

The router sits at the heart of the system. This impressively compact and stylish cube is beautifully made, with a soft-touch white finish, and attractive white glowing LED strip around the bottom. It houses four Gigabit Ethernet LAN sockets, an Ethernet WAN socket (the connection to your modem, for instance), a USB port and its own Wi-Fi. The power socket is also a Type-C USB connection, so it is possible to potentially power the router from your computer, plus finding spare cables should seldom be a problem.

Buy it on its own and you’ll have a perfectly acceptable conventional router with range that’s sufficient for a small terraced house, for instance. It isn’t exactly brimming with extra features, but it will do the basics of getting you online. 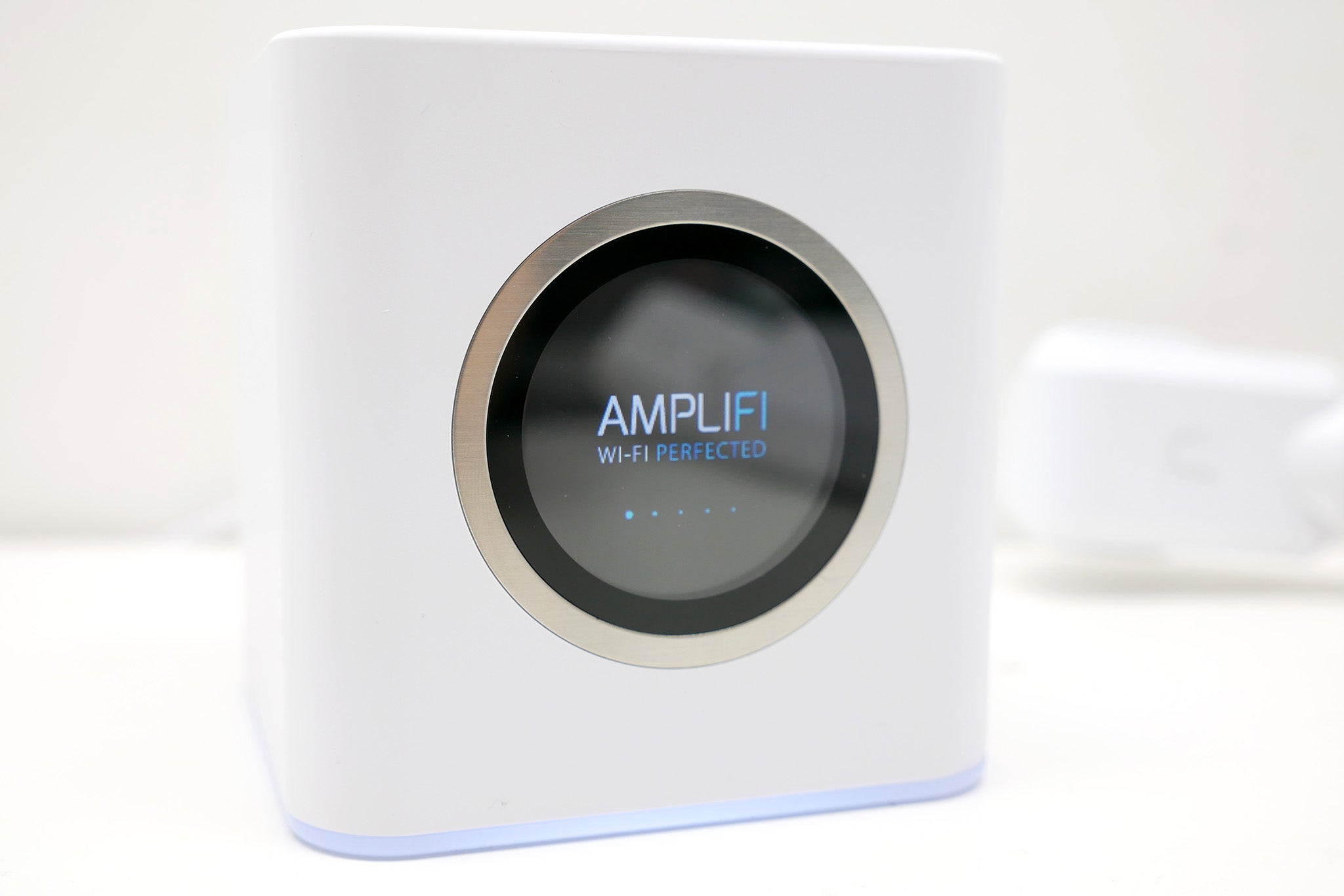 A touch of flare is added to the router in the form of a 1.6-inch diameter circular LCD touchscreen on the front. This shows the day, date and time, and then at the tap of its face it will show how much data throughput is being used. Tap it again and it will display WAN status and IP addresses, as well as the number of devices connected.

You can’t configure the router from the screen, however. As such, it feels a little pointless. If you’re in the habit of putting your router in your home office or kitchen then it might be nice to glance at the information it displays once in a while, but it’s just too limited to be of any real use.

Moving on to more practical considerations, the router’s internal Wi-Fi is a dual-band affair, with one 2.4GHz frequency band and one 5GHz band. Each is configured in a 3×3 system (three spatial streams in each direction), with the 2.4GHz band totalling up to 450Mbps and the 5GHz band up to 1300Mbps.

This puts it ahead of the likes of the Eero, Google WiFi and Linksys Velop, which all use 2×2 systems; out in front is the Netgear Orbi, which uses 2×2 for its client device connections but a dedicated 4×4 connection for wireless backhaul (the connection from the router to its extension).

Of course, the key appeal of mesh router systems isn’t so much raw Wi-Fi speed as range and consistency of connection, which is where the mesh points come in. Plug these in at strategic points throughout your home and you can easily cover even large homes with just this three-part kit.

They’re different to any other mesh extension we’ve seen before. Instead of a standalone unit with a separate power supply, the mesh points plug directly into a plug socket and then point upwards, above the socket, for a total length of 7.1 inches. A clever magnetic ball-and-socket system attaches the bulk of the adapter to the plug, and it also allows you to move the antenna around in order to achieve the best signal.

What’s particularly clever about this joint is that the two pieces can pull apart completely. This means that if a child or pet were to knock into the unit, it’s unlikely to snap – although, of course, this is only a potential problem anyway because such an odd design was used in the first place. 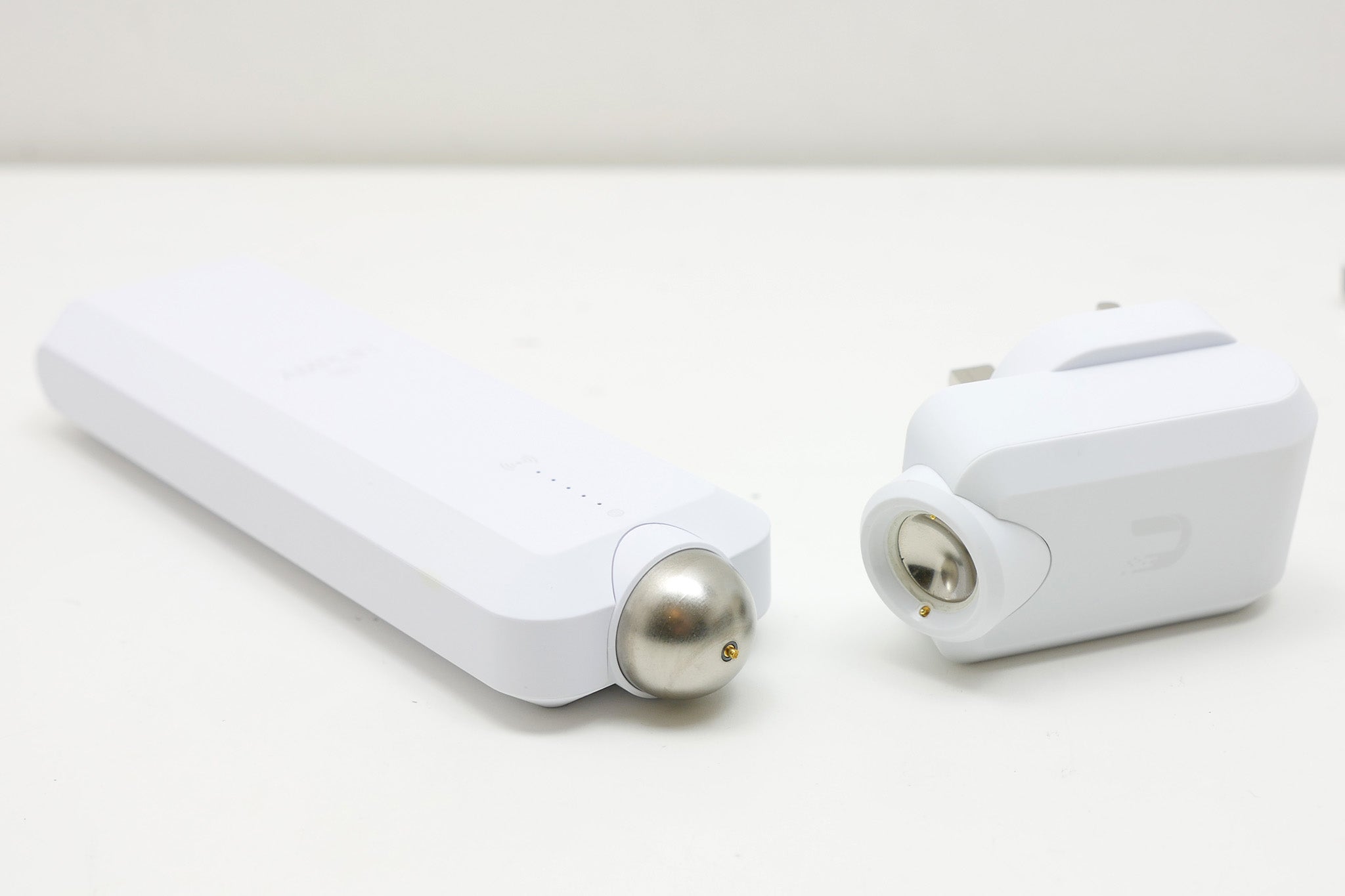 On each mesh point you’ll find a useful LED signal-strength meter – but that’s it. There are no buttons, Ethernet sockets or other features. You just plug them in and, assuming they were bought in a kit with the router, away they go. If you buy extra mesh points then you’ll have to pair them up, but this is a simple enough process.

Overall, this all adds up to a fairly basic feature set. Since the mesh points have no LAN functionality, you can’t connect wired devices to them and neither do they support wired backhaul – this is where you might lay out a cable to your garage and plug the mesh point into that connection so you can spread the Wi-Fi connection over longer distances.

Meanwhile, the router has very little in the way of extra software features too. There’s no built in antivirus, USB sharing, and so on. It can be configured to function in a bridge mode, however, where it just acts as an access point rather than a router.

Most simple, consumer-focused mesh systems are fairly limited, but the AmpliFi is more limited than most.