What is the Netgear Orbi?

The Netgear Orbi is a new spin on the home Wi-Fi router, designed specifically to stretch Wi-Fi coverage further than any normal router can manage.

It achieves this because it’s essentially two routers in one, with the second unit acting like a glorified Wi-Fi extender. However, there’s no head-scratching setup routine or disappointing performance as is likely with most Wi-Fi extenders. Here you get blazing-fast Wi-Fi and a totally effortless setup – it’s the future of Wi-Fi, for a price. (read our guide to the Best wifi extenders)

The secret to the Orbi is that it consists of two units, each of which is a fully fledged tri-band router. That is, each router has several Ethernet ports and USB ports, and each has one 2.4GHz Wi-Fi band and two 5GHz bands. Such tri-band routers are nothing new – although it’s still quite a high-end feature – but it’s what the Orbi does with them that’s the key.

It dedicates one of those 5GHz bands solely to communication between the main router and the satellite router. This wireless backhaul largely eliminates the main problem associated with conventional Wi-Fi extenders, whereby they rely on a single band to communicate both with the router and any devices connected to the extender. This greatly reduces the speed at which the extender can work and is largely why extenders should be considered something of a last resort. 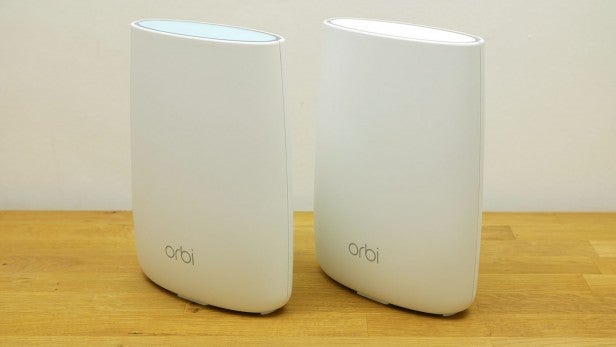 It is possible to add further satellites to the Orbi system, although the returns will be diminishing after a point as the system starts to run out of separate dedicated Wi-Fi bands to communicate between the routers.

The other vital element of the Orbi is that it uses only one SSID (the Wi-Fi connection name), rather than having separate ones for each Wi-Fi band.

Again, that’s nothing new per se – it’s generically known as band-steering and is often called Smart Connect – but when combined with a tri-band, multi-router system it completely takes the headache out of what could be a complicated and frustrating setup.

With the Orbi, setup is as easy as plugging the main router into your broadband modem (there’s no modem included here) and powering it on. Then you place the satellite where required and turn it on. The two will automatically find each other and, after only a few seconds, you’ll be ready to connect and login to the router. 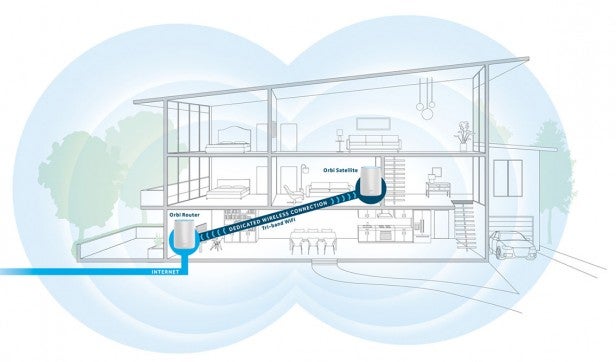 The idea is that you place the main router somewhere convenient, close to where your internet connection enters the house – as you would with any normal router. The satellite router is then placed somewhere more central.

So, for example, if you have a three-storey house then you’d have the router on the ground floor, often next to one side of the house, then the satellite in the centre of the middle floor from where it can reach the rest of the house.

There are other Wi-Fi solutions that work in a similar way to the Orbi system, with several routers used to spread the load of the network. There’s Ubiquiti’s Amplifi HD Home, Luma Home and Eero, for instance. However, none of these are tri-band with a dedicated 5GHz band for backhaul. Nor is each router as powerful, or do they include as many features or offer as many customisation options.

The Orbi router and satellite are identical: tall, white units with an oval profile and soft-touch white finish. It’s a far cry from the angular, aggressive styling of Netgear’s Nighthawk range of high-end routers, such as the Nighthawk X4S R7800.

This more friendly design is in some ways more practical, too. With such a small footprint and no external aerials getting in the way, the units can sit unobtrusively on a windowsill or shelf.

The downside is that raw performance won’t quite match some hefty routers with external aerials simply due to the Orbi units’ six antennae being squeezed inside a much smaller space. But the main goal here isn’t maximum performance but consistent, more far-reaching performance. 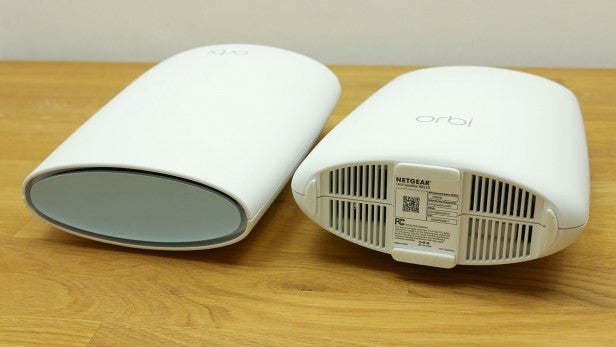 Atop the units is an oval ventilation opening from which a ring of light is emitted. This glows magenta, blue or white and flashes occasionally to indicate the status of each unit. You get no other feature-specific lights, though, so diagnosing a problem isn’t quite as straightforward as looking at a flashing light – like it is on some routers. 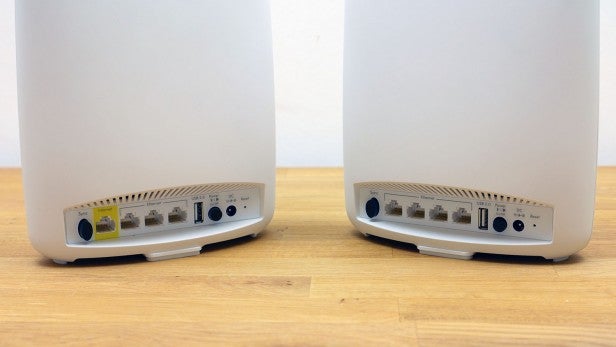 Round the back of the router is the modem input (WAN) and three more Ethernet ports for connecting whatever wired devices you may have. There’s a USB connection that can be used to share printers or files from USB drives – it’s only USB 2.0, though, which will limit file-transfer speeds as compared to routers with USB 3.0.

Finishing things off are the power button, power connection and reset button. It’s always good to see a dedicated power button, rather than having to rely on pulling the plug; it makes it easier to fulfil the IT technician’s first rule – try turning it off and on again.

Turning to the satellite, it’s essentially identical but the WAN socket is a normal LAN Ethernet, so you get four sockets in total. All are Gigabit Ethernet, rather than the slower 100Gbps you get on some cheap routers.