What is the Linksys Velop?

The Linksys Velop is a whole-home Wi-Fi or mesh-router system that, like the Netgear Orbi, uses several routers that work together to extend the range of your Wi-Fi signal.

Adding a new router – or node – to the system makes it act essentially like a Wi-Fi extender. However, it’s more powerful and far faster, making for a much more robust Wi-Fi setup.

Available as either a single unit, in a pair, or in packs of three, you can add as many nodes as you like – and no matter the number in your system, you’ll have only one Wi-Fi name and password to worry about; you can roam seamlessly between each node without ever losing signal.

In many ways, it’s a mighty fine system – although a lack of extra features and its high price means its mass appeal is limited.

Although available in single units or as a pair, the Velop system is most readily being sold – and pushed by Linksys – as a three-node pack, so it’s this version that I have on review here.

It arrives packaged and presented in as premium a manner as you’d hope for of a system costing £500.

The magnetically clasped, thick cardboard box opens to reveal three individually wrapped nodes set side by side, along with three tidily packaged power supplies. It certainly goes some way to take the edge off the pain of having just splashed this much cash. 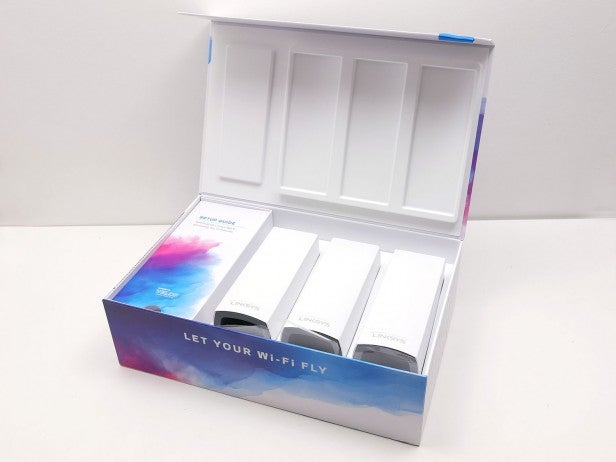 The nodes themselves are nicely designed and manufactured. Finished in matte white plastic, with a grey rubber base, they stand at 185mm tall and have a 76mm-wide, square footprint.

The Velop is very much in the same minimalist vein as the Netgear Orbi, but it’s even more effective because of both the slightly smarter design and its smaller size.

However, where it excels in design, it lacks in features. You get just two Ethernet ports on the bottom of each node, which compares to four in each Orbi hub, and there are no USB ports.

This means that, unlike just about any other conventional after-market router, even many ISP-provided routers, you can’t plug in printers or USB hard drives to share them with other devices on your network.

Considering its price, this raises some questions about the value the Velop system offers. Simplicity is one thing, but missing common features is hard to understand. 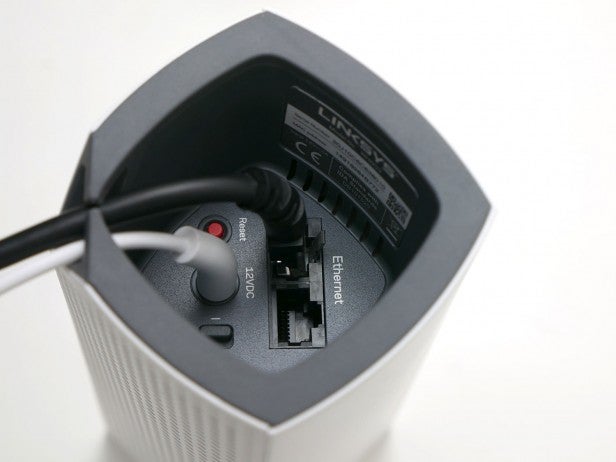 Connectivity options might be minimal, then, but the positioning of the sockets works quite well. The downward-facing ports mean cables don’t jut out on the side quite so far, making for a tidier, more compact setup. Wall-mounting isn’t an option, though.

Each node features a reset button, a power switch and the power input. Meanwhile, up top is a single light that glows a variety of colours to indicate the status of the node – whether it’s connected properly, or if it’s too far away from the other nodes and receiving a weak signal for example.

Setting up the Velop system is an odd combination of utter simplicity and teeth-grinding frustration. The simplicity comes from the fact that the entire process is taken care of by Linksys’ mobile app, available for both Android and iOS devices. Download it, create an account and you can start adding your nodes.

It steadily guides you through setup, telling you what to plug in where, automatically connecting to and configuring each node and determining whether it’s in a good location. It’s all very slick. 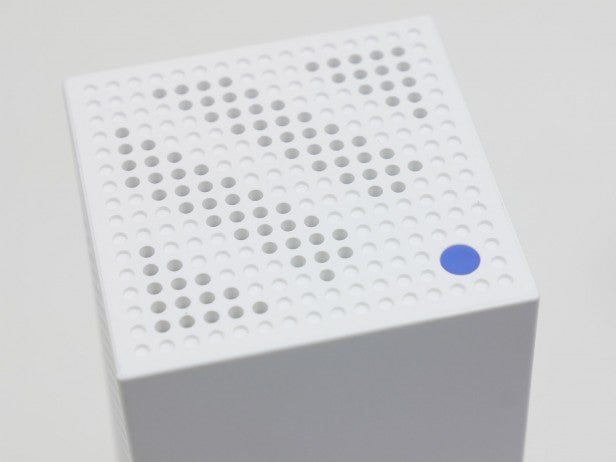 However, the frustration comes in for a couple of reasons. The first is that there isn’t an option outside of the app route. Unlike just about every other router on the market, the Velop doesn’t offer a web-based menu system.

Or, more precisely, there is one but Linksys deliberately makes it difficult to access; it flatly says it’s only for servicing by Linksys personnel.

This means you’ll always need a mobile device with the Linksys app on it in order to configure or troubleshoot your router system.

Moreover, the app makes setup quite slow. I roughly timed that it took around five minutes to set up each node, which may not sound like much but when you have three of them, it soon adds up. 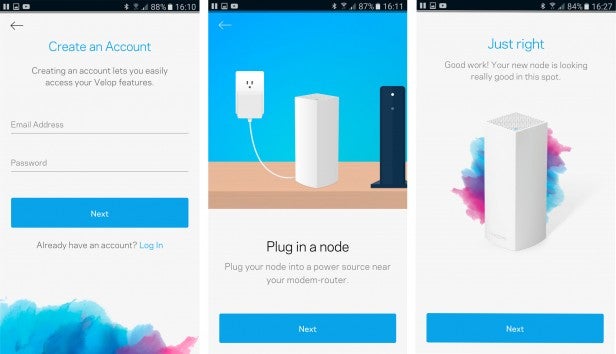 What’s more, the system automatically applies firmware updates. Although these normally take place in the middle of the night, they run as soon as the system is first setup, adding another five or ten minutes to the initial process. In all, it took around half an hour to get the system set up.

Compare that to the Netgear Orbi. It comes as a synced router and hub pair that you just plug in and turn on. Allow a couple of minutes for it to boot up and sync, and you’re ready to go. You have to dive into the menu if you want to change the default settings, but if not, that’s it.

Linksys should be applauded for making a system that’s so accessible to the novice user, but for more knowledgeable users, it goes too far in that direction.