Google Wifi launches April 6, so it’s high-time we brushed up on our mesh Wi-Fi knowledge. Here’s everything you need to know about whole-home Wi-Fi solutions.

Mesh router or whole-home Wi-Fi systems use multiple routers, or nodes, to spread your Wi-Fi signal throughout your home. This results in greater coverage, faster speeds and a more reliable connection. We’ve tested several models already and have been impressed – but just what are they, and how do they work?

With Google WiFi set to launch in the UK tomorrow for a price much lower than many of its rivals, we thought it high time to revisit the topic and give you the low-down on the state of the market.

What is whole home Wi-Fi?

Your traditional router is a single item that controls all your network duties. Connecting to the internet, connecting wired devices via Ethernet, sharing USB devices such as printers and USB hard drives and, of course, Wi-Fi.

They’re great, and a good-quality modern device has powerful and fast enough Wi-Fi to cover most typical three- or four-bedroom houses. However, if you have a larger home – or want to stretch your Wi-Fi to an outbuilding at bottom of the garden, for example – then the Wi-Fi signal from a single router may not reach the furthest parts.

That’s where mesh routers come in. They’re essentially glorified Wi-Fi extenders that pick up the signal from your main router and pass it on to your devices, or yet another mesh router node.

The nodes work together to distribute the load of the network, and offer three key advantages over normal Wi-Fi extenders.

The first, and in many ways most crucial, is that despite having multiple nodes with multiple Wi-Fi signals, the whole mesh system unifies your Wi-Fi connection into one network name (known as an SSID). So no matter where you are in your home or office, you’ll only ever see one network name.

The second advantage is an extension of the above, which is that the system will also take care of determining which signal is best for your devices to connect to. So as you roam around your home, not only do you not have to worry about changing your Wi-Fi login from zone to zone, but you can be safe in the knowledge that the system has connected you in the fastest way possible*.

These first two advantages are the defining characteristic of mesh router systems, but the latest, most powerful systems have a third feather in their cap. Quite simply, they tend to be more powerful than conventional Wi-Fi extenders. Each node is often a dual- or tri-band router in its own right, so it can communicate with your base router, other nodes and your devices far faster than most Wi-Fi extenders.

Such solutions have been available commercially for some time, but it’s only in the past few years that affordable, easy-setup systems have become available for home users.

* These systems will always endeavour to connect a device at the best speed, but sometimes it will keep you connected via a slower route as you roam about, if the signal is still strong. Disconnecting and reconnecting will trigger the system to connect you via the fastest route.

Are all mesh routers/whole home Wi-Fi systems the same?

No, categorically not. There are no standards; every system is different and isn’t interchangeable, so once you’ve bought into one then you’ll have to stick with it or upgrade the whole lot.

However, there are broadly two types of system. There are those that take over from your router, such as the Netgear Orbi and Eero, and devices that work in conjunction with your router, only taking over Wi-Fi duties – such as the BT Whole Home Wi-Fi and Linksys Velop ( Velop can actually work both ways).

Which approach is best will depend on your needs. If you already have a good-quality router with all the features you need then the latter might suit you better. If you’re looking for a complete system upgrade, however, then the router-replacement route may be best. 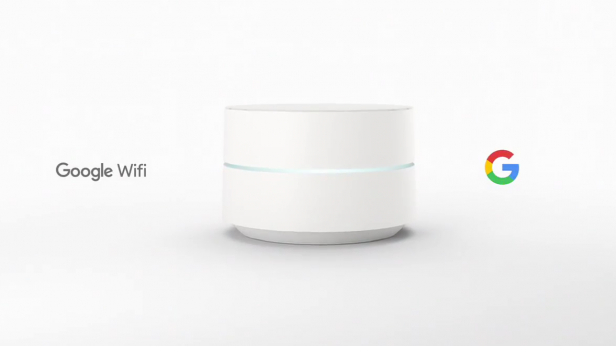 How fast are they?

In our regular tests we’ve found that a powerful conventional router can reach speeds of 500Mbps+ at close range, dropping to around 300Mbps+ in an adjacent room (we’re talking about brick-walled homes) and to around 200Mbps from two rooms away. If three rooms or floors away, the signal will have dropped to 100Mbps or below, and it can often be unreliable by this stage too.

In contrast, we’ve found that the fastest mesh routers can consistently deliver 300Mbps+ throughout a three-storey home.

Specifically, our large-home router test setup has the first node or base router placed on the ground floor, to one side of the house where the internet connection enters the home. We place the second or third nodes (depending on the system) of the mesh system in the middle of the second and third floors. Speed measurements are taken on the middle floor (test 1) and two locations (test 2 and 3) on the top floor. 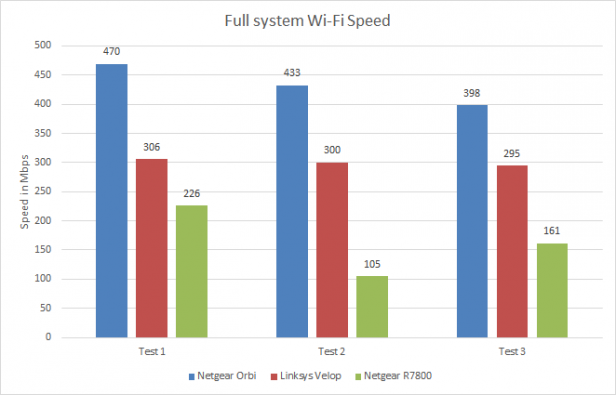 The Netgear Orbi and Linksys Velop are mesh systems; the Netgear R7800 isn’t

Some of the earlier mesh systems that we’ve yet to test such as Ubiquiti, Eero and Google WiFi are inherently less speedy as a result of the hardware not being of the very latest Wi-Fi standards, so expect overall speed to be lower. Instead, their advantage lies in providing a consistent and reliable network speed, along with the convenience of the single SSID. After all, even 100Mbps is plenty for streaming HD video and most other uses, as long as it’s reliable.

In particular, Google Wifi is arriving at a very attractive two-pack price of just £229, which undercuts the majority of its rivals; its lack of top-end speed may well be a minor blip in what appears to be a super-simple and cheap system.

We’ll be testing Google Wifi very shortly and we’ll report back with our results soon after the system’s UK launch.

As an overall Wi-Fi system, most mesh routers have few downsides. On the whole, they’re easy to setup and just work thereafter. However, there are a couple of things to consider.

The first is whether you’re concerned about latency. If you’re a gamer who wants to have the absolute fastest possible connection then the added latency of using not just Wi-Fi but an extended Wi-Fi signal may be a concern. If this is the case then a Powerline connection may be your best bet – these can also work alongside a mesh router system – if you can’t trail an Ethernet cable directly to your PC or games console.

The second is the limited functionality of the systems. If you’re buying a system that replaces your router then be aware that most of them don’t offer the advanced abilities of expensive conventional routers such as the ability to share USB devices like printers and hard drives.

They also offer limited functionality for managing other aspects of how your network is set up. The Linksys Velop, for instance, is completely controlled via a basic mobile app, with no web interface for configuring the system at all.

What are the alternatives?

There are three main alternatives to mesh router systems. The first is simply to use a conventional Wi-Fi extender. They’re far cheaper, and if you have only one or two rooms struggling for coverage then they’re the quickest, cheapest and simplest way of extending your signal.

However, they do tend to be significantly slower – the very fastest we’ve tested still can’t hit 150Mbps – and you miss out on the convenient single SSID. A typical dual-band router and dual-band extender setup will result in four SSIDs.

Another alternative is Powerline networking. These use existing power cabling in your home or office to send and receive data. Just plug one adapter in next to your router and the other next to where you need the signal and you should be connected.

Powerline connections can be fast and are generally more reliable than Wi-Fi, and they have a lower latency. Plus, several include a Wi-Fi access point at the extended end, too. However, if you don’t already have the power cabling then it’s no more convenient than laying a network cable, and breaks in the circuit or the use of different ring mains for different areas of your home may mean the signal can’t get through.

The third alternative is of course to just run a length of network cable and either connect directly to it or add a network switch or Wi-Fi access point at the end. It will be the fastest, most reliable way to extend your network. However, unless you have the opportunity to lay the cable while redecorating, it may prove a troublesome and unsightly option.

If you’re looking to extend your Wi-Fi coverage down long corridors or over particularly large areas – such as a large warehouse – then leaky feeder cables are another possible solution. These use coaxial cables that leak a small amount of RF energy – i.e. Wi-Fi – all the way along their length. Originally developed for use in mines, they’re now used in hotels, planes and other situations where it’s impractical or not cost effective to have multiple access points.

They’re not a solution we’d ever recommend for home or small business use as installation isn’t straightforward but if you have a particularly large premises and have the opportunity to do a proper installation then it’s something to consider.

What does the future hold?

Mesh routers are relatively new to the market but look set to become the de facto choice for many larger households. As such, we’ll likely see them diversify in the same ways as conventional routers. There will be fast ones, slow ones, systems with the latest, greatest Wi-Fi standards, plus those with extra features and more.

Around the corner we have 802.11ax Wi-Fi, which aims to unify all the existing Wi-Fi bands into a single system, whilst offering even greater range than 802.11ac. It won’t arrive until the end of the year at least, so for now the range of mesh routers currently available is likely to remain as good as you can get.