Setting up the AmpliFi is easy. Bought as a kit, you can just plug in the router and mesh points where needed and it will automatically connect.

For configuration, you can use either a web browser or the AmpliFi app. For the former, simply connect to its Wi-Fi network or one of its LAN ports, then browse to 192.168.187.1. For the latter, download the app, connect your phone to the default Wi-Fi, open the app and follow the instructions. 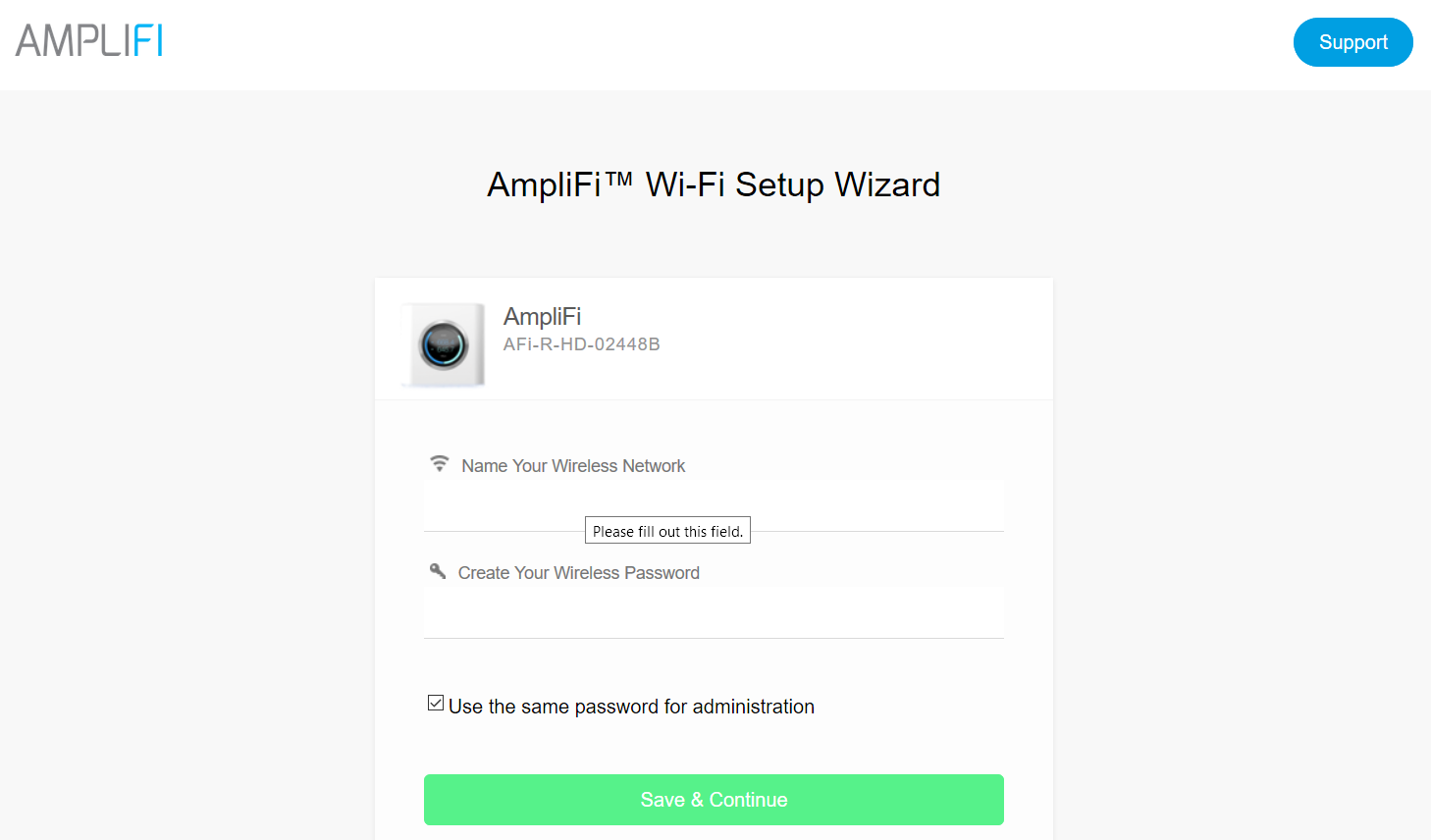 Oddly, although there’s a web browser-based interface for initial setup – setting a password and checking the internet connection – you can’t actually configure the router in this way. To change the Wi-Fi name, switch the router to bridge mode, update it or anything of that nature, you have to use the app.

It’s good, then, that the app is fast and easy to use. Along the top are five tabs that correspond to general settings, throughput, guest network, user access and status. 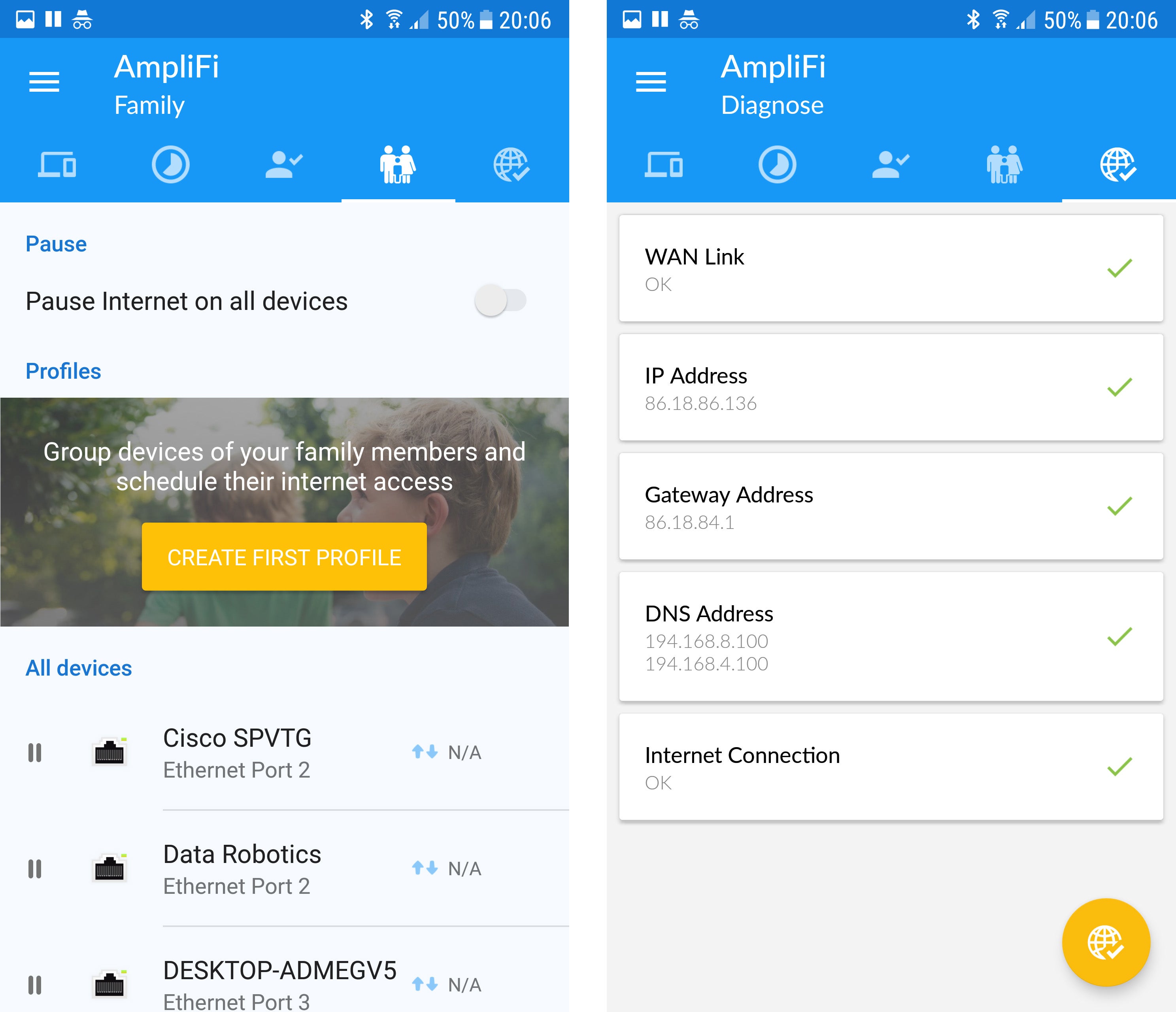 The latter simply shows a tick or a cross next to the WAN link, IP address, Gateway address, DNS address and internet connection, indicating whether each feature is functioning properly.

Working backwards, the user access tab shows each connected device and allows you to pause internet access for it. Plus, you can pause access for all devices.

The guest network offers the option to turn on a guest network and choose how many devices can connect to it, plus you can access the general Wi-Fi settings.

Throughput shows the real time and total throughput of the router, and from here you can also run an ISP speed test. 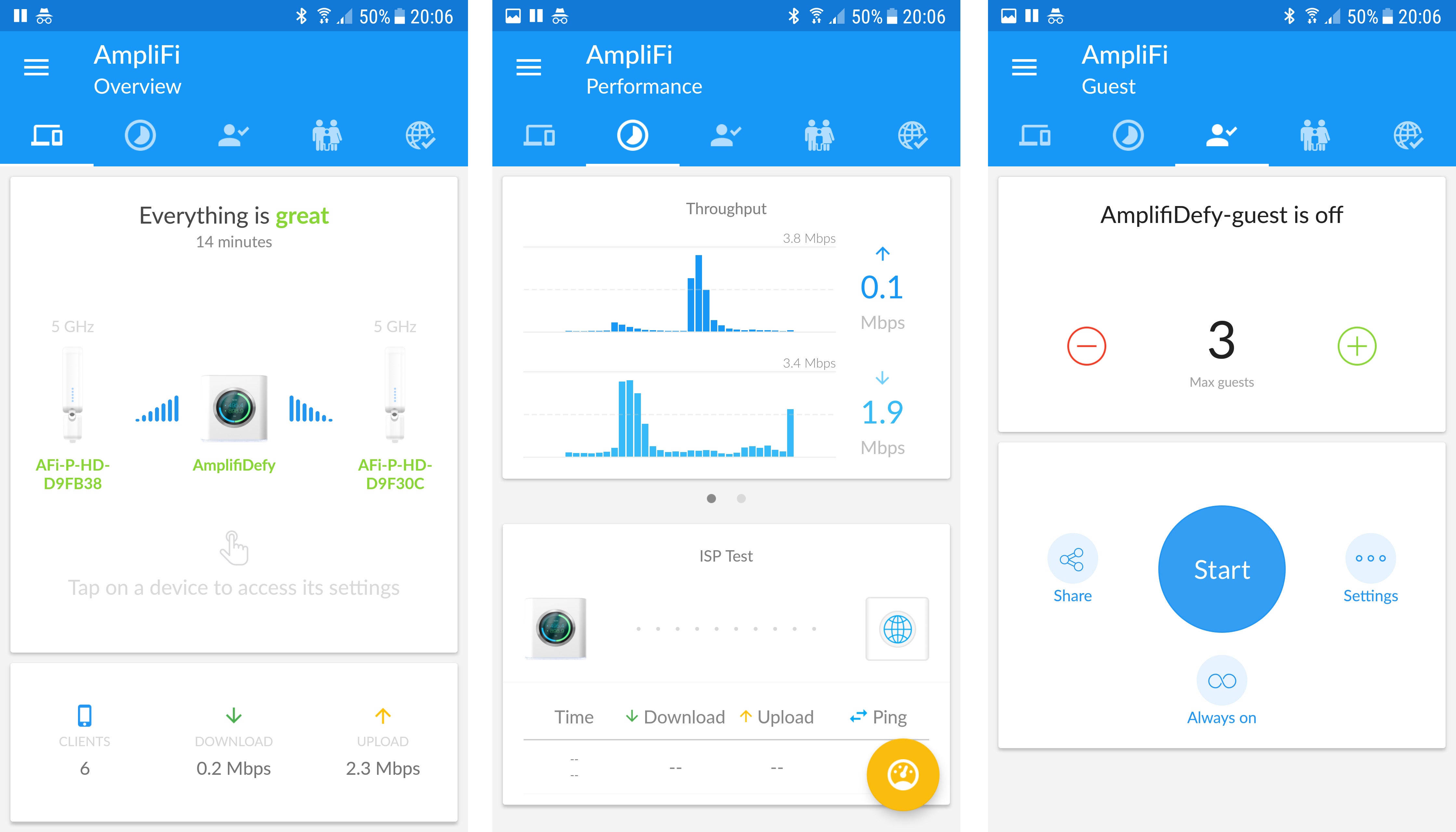 Finally, there’s the general Settings tab, which displays the overall status of the AmpliFi system; tap on the router or one of the mesh points, and you can configure it.

Options include turning off/on/down the display or LED, and switching on a night mode where these turn off automatically. The volume of the built-in speaker (this beeps as you press the display or change other settings via the app) can also be adjusted, and the time zone set. Internet access type – DHCP, static, PPPoE – can be changed, IPv6 enabled and Bridge Mode turned on.

Perhaps the most surprising addition is the option to turn off band-steering. This is the technical term for the technology that enables the system to present only a single Wi-Fi SSID, rather than one for each band; normally with mesh systems, there isn’t an option to turn it off.

There’s also a router-steering option that directs devices to connect to the router, rather than any mesh points. The benefits of doing this are unclear, given that there are no further options to configure how this works.

All told, this isn’t a power-user or professional set of options. The AmpliFi offers the absolute basics, which almost all home users will need, but the system is a far cry from the more comprehensive options available on the company’s Unifi products.

The first test for any router is to double-check if its Ethernet ports are up to spec – and sure enough, the AmpliFi passed without issue. If you’re connecting devices via the LAN ports, this router is as fast as any other.

Next up is the tougher challenge: Wi-Fi speed. The AmpliFi’s specs don’t suggest it will be an absolute speed demon, and this was confirmed throughout testing. At close-range it delivered 381Mbps, which is perfectly nippy but some way behind the very fastest routers I’ve tested. What’s more, in longer-range tests, the router on its own didn’t prove all that impressive. 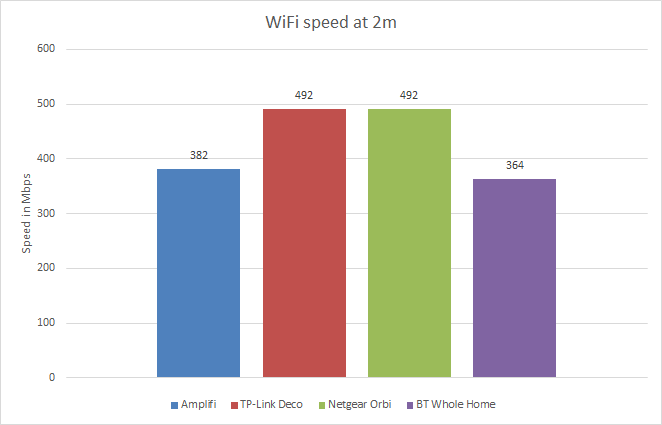 For these tests I setup the router in a large, three-storey, six-bedroom home. The router was placed on the ground floor (UK terminology here – ground floor is what we call the equivalent of the 1st floor in America) to the side of the house. The first extension was placed at the centre of the middle floor and the second extension at the centre of the top floor. Speed tests were then carried out at three locations: two of the top-floor rooms (test 2 and 3) and one of the middle-floor rooms (test 1).

With just the router in use, only the most powerful tend to provide a reliable and fast connection to the whole top floor; sure enough, the AmpliFi router on its own wasn’t all that fast. It managed 110.9Mbps, 48.5Mbps and 48.7Mbps in the three test locations. Still usable, but it might struggle with more than one device accessing it. 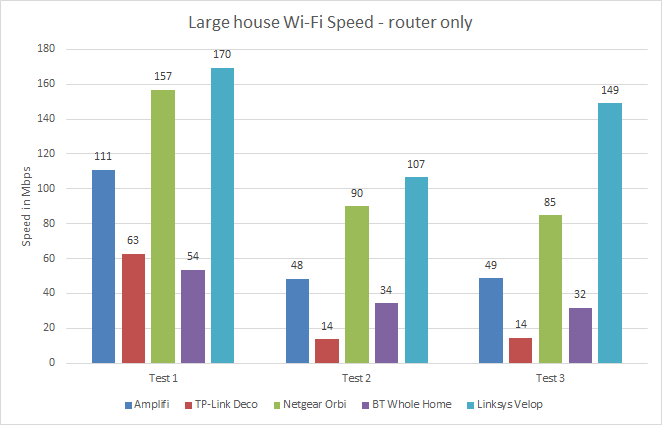 Adding in the first mesh point on the middle floor resulted in speeds leaping across the board. It hit 150.1Mbps, 143.4Mbps and 145.7Mbps in the same three locations. Again, these speeds aren’t particularly impressive. In fact, they’re comfortably the slowest of all mesh routers we’ve tested so far. 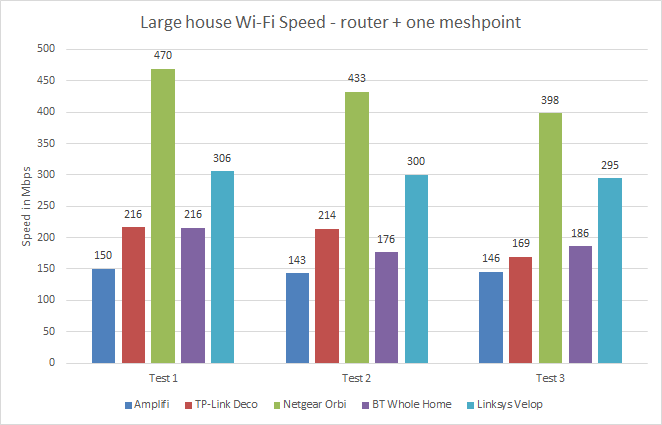 Meanwhile, adding the third mesh point actually reduced speeds. This is a common occurrence, since daisy-chaining one extender to the next in such a manner isn’t the ideal setup. Ideally, the router would be in the middle of the house and the two extensions above and below. However, we test in a more realistic setup, which provides a better indication of how the system will work if you do need to extend it further. 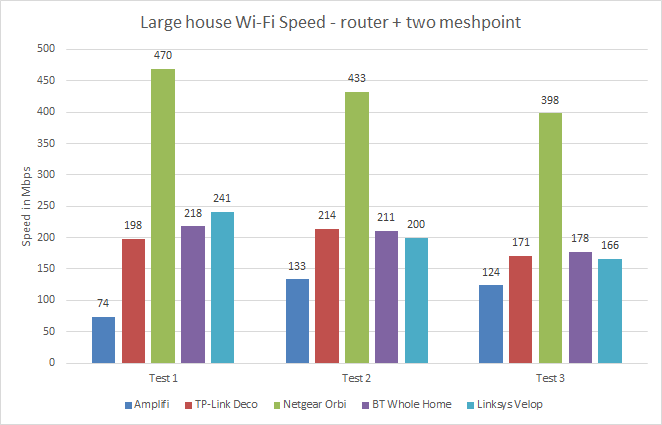 All told, the AmpliFi is absolutely fine in terms of performance. It’s reliable and fast enough for HD streaming and most other internet activities. It simply isn’t the fastest mesh system out there. 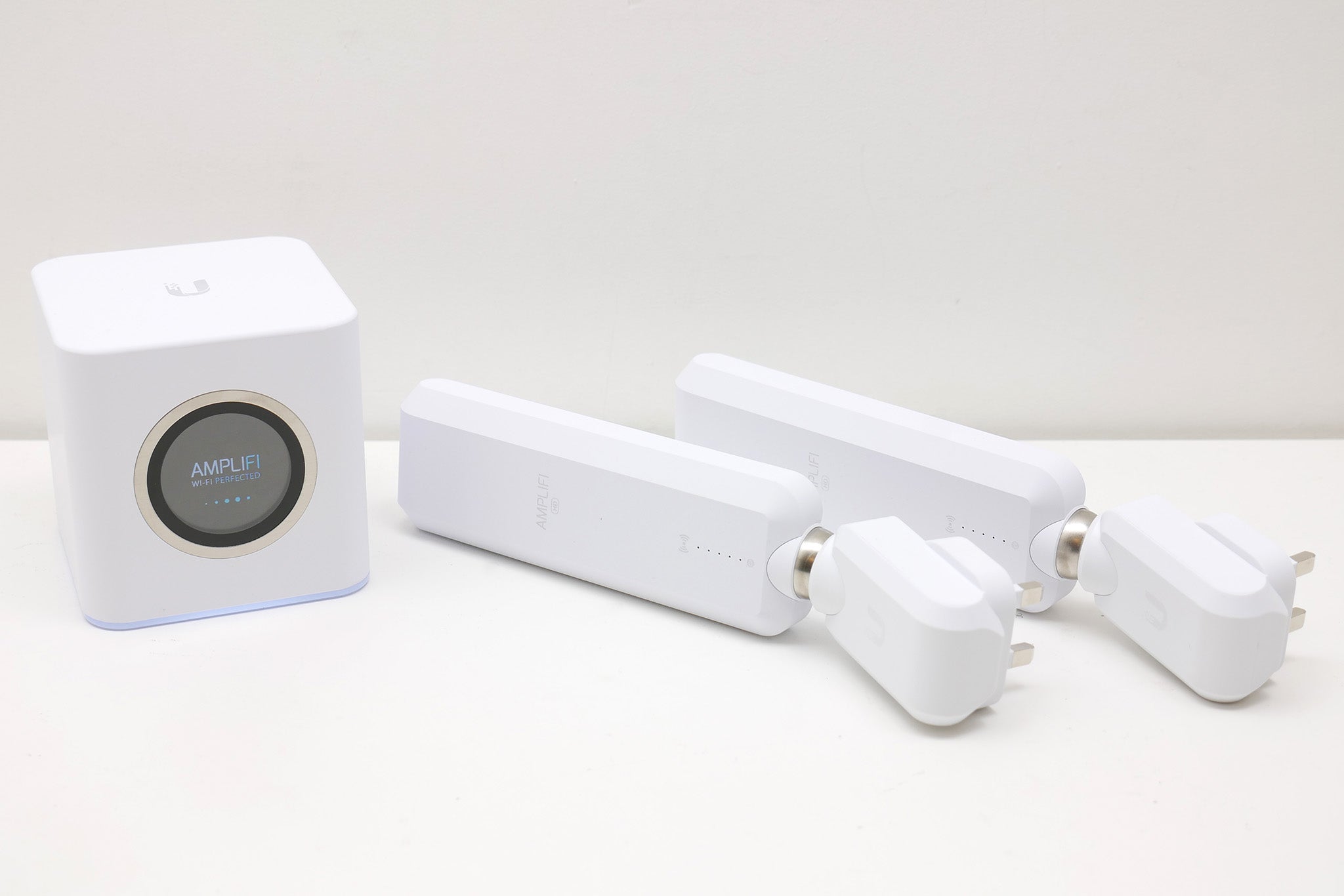 Should I buy the Ubiquiti AmpliFi?

The AmpliFi is another solid addition to the ever-increasing lineup of easy-to-setup and reliably fast mesh Wi-Fi systems on the market. If you simply want reliable Wi-Fi coverage throughout your home then it certainly delivers.

However, it doesn’t do all that much to set itself apart. The BT Whole Home is cheaper and even easier to setup, the Netgear Orbi is far faster (although this does depend on your setup), and the Linksys Velop is more versatile.

The AmpliFi’s stylish router design with touchscreen and the excellent mobile app are nice to have, but there isn’t quite enough here to excite. The Ubiquiti AmpliFi is worth a look if you can find it for a bargain price, but it isn’t a standout buy as it is.