Available on PS4, PC, Xbox One
Three years ago, Ubisoft surprised us with Far Cry 3: Blood Dragon – a lunatic mash-up of Far Cry 3, 16-bit video games and 1980s action movies. At E3 this year, the games developer did it again with Trials of the Blood Dragon, an equally crazed combo of RedLynx’s Trials series and retro run-and-gun shooters, given the same stylised 1980s treatment.

If Trials of the Blood Dragon isn’t quite so successful, it won’t be for a lack of gonzo fervour; the team at RedLynx has thrown just about everything it could into the mix.

It plays out as a semi-sequel to Blood Dragon, taking the twin kids of the first game’s hero, Rex Colt, on an action-packed journey through, well, wherever RedLynx thought might be a good idea during a crazed brainstorming session that presumably involved hard liquor, if not soft drugs.

It starts off much like a Trials game. Make your way from start to finish, tilting the bike backward and forwards while manipulating brake and throttle to get you up, down and over whatever is in your way. 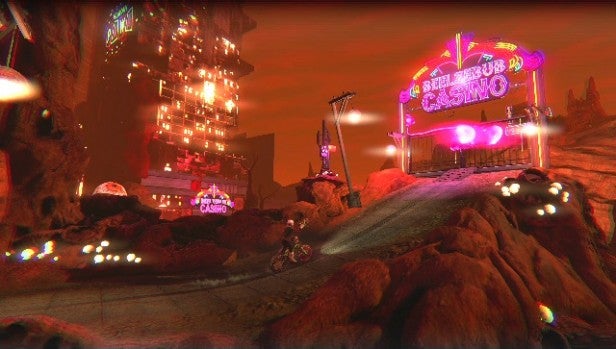 Soon, however, Trials of the Blood Dragon throws in a secondary play mode, where your current young Colt battles through the level on foot, shooting bad guys, dodging death-traps and, basically, acting like the star of a 16-bit platform-shooter game.

And just when you think you’re getting used to this weird mix, the Trials/Blood Dragon hybrid starts to become really strange. You’ll race mine carts along crumbling tracks on a quest to steal the Holy Grail. You’ll pilot a tiny radio-controlled car through ventilation ducts and under floors, while RedLynx pays tribute to Hotline Miami.

Carry on and you’ll find trips to Hell, alien invasions, jetpack sequences with echoes of the classic Thrust and riffs on Rambo, Total Recall, Doom and Konami’s Contra. This is Trials – at least part of the time – but not Trials as you know and love it. 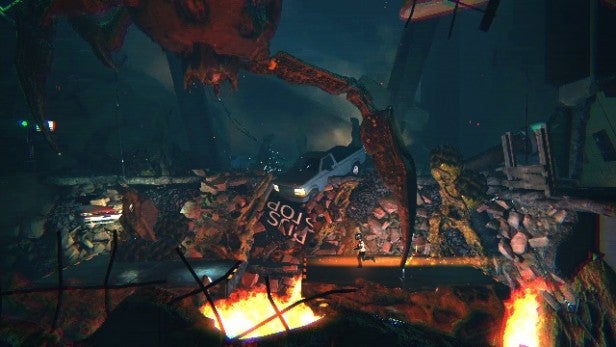 But here’s the thing. There are sections, and sometimes long ones, where Trials of the Blood Dragon is a lot of fun. The Trials levels might be Trials in a different skin, but the gameplay doesn’t suffer and there are some great ideas.

Having to blast baddies from your bike with an SMG is a nice addition, while a grappling hook for swinging across chasms also opens up a few intriguing tricks. If I’m being picky then there’s a little too much sudden death trial and error, spoiling the flow of the ride. However, copious check points reduce the pain a little without leaving you feeling that you’ve got away, scot-free.

Sadly, the platform-shooter stuff isn’t nearly so enjoyable. It’s hard to know what’s worse: the weird controls, the insta-death, or the slow crouch animation that all too often gets you killed. Or how about the tiresome, bullet-hell boss battles or infuriating choke points? 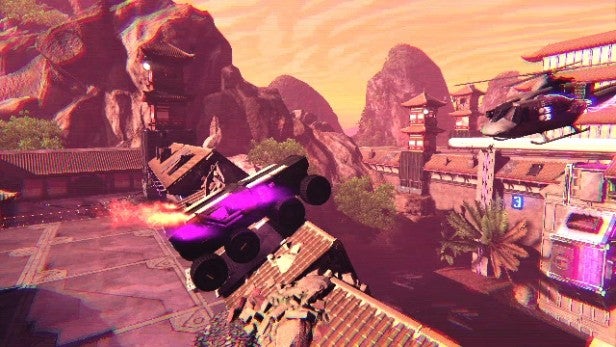 Trials of the Blood Dragon is sometimes funny and sometimes compelling, but the Trials stuff isn’t as polished as in a fully fledged Trials game, while much of the other stuff has been done better, not least by the superior – and wittier – Broforce.

The presentation is a similar mix of the brilliant, the crazy and the downright bad. I love the use of the twins’ room as a hub of operations, with the various levels accessed through posters for a bunch of low-budget, direct-to-VHS films. I also love the music, which carries on Blood Dragon’s superb pastiche of 1980s action-movie scores. I love all the neon glows, dry-ice effects, scan lines and video artefacts – not to mention the return of the great Michael Biehn.

Yet it must be said that a lot of Trials of the Blood Dragon looks a little rough or even ugly, and I can’t really tell whether that’s intentional. Either way, we’re a long way from Trials Fusion’s polished good-looks. 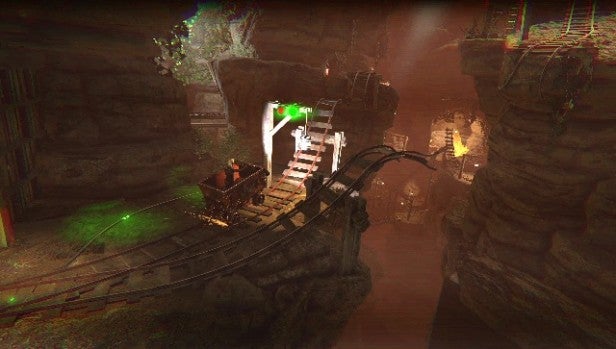 The seven different areas won’t take you more than a few hours to get through, providing you can endure the most frustrating sections or annoying boss battles – and once you’re done, you’ll only have the leaderboards to rise up and friends’ ghost-runs to beat. That’s not a serious issue given the budget pricing, but it’s another area where Trials of the Blood Dragon falls short of the mark.

Verdict
RedLynx seems to have had a lot of fun with Trials of the Blood Dragon, and sometimes that fun is infectious. Too often, however, you suspect that this crazy side-project was more fun for RedLynx to dream up than it is for you to play. While it entertains for roughly half of its running time, this bizarre hybrid can’t hold a candle to the retro styles of Broforce, let alone the stunt time-trial perfection of Trials at its best.