Far Cry 3: Blood Dragon gives us the expansion pack as a stand-alone remix: a variation on the themes of Far Cry 3, but not in any form you might immediately recognise. It’s a homage to the eighties in the shape of a modern FPS, gleefully referencing all the sci-fi blockbusters, direct-to-video action movies and 8-bit video games of the era.

Ubisoft’s Dunia Engine 3 has been tweaked to deliver an aesthetic that draws on The Terminator, Tron and Universal Soldier – yes, we know it came out in 1992 – plus every NES and Commodore Amiga sci-fi action game that you can think of. Meanwhile the magnificent, synth-heavy score has overtones of Brad Fiedel’s music for The Terminator, Vangelis and Tangerine Dream. At times, it feels like the game that the lurid adverts for classic Spectrum and C64 games always promised, but never had the technology to deliver – until now. 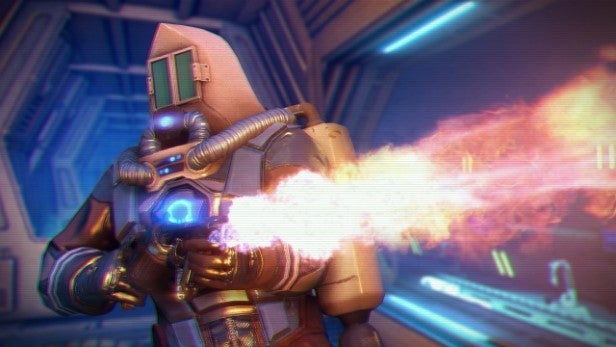 What’s more, it’s all being played for laughs. It’s hard to know exactly what Blood Dragon thinks it’s satirising, and whether the target is eighties movies, eighties video games or even – in a roundabout way – today’s big action titles.

The hero, Rex ‘Power’ Colt, played with the vocal equivalent of a poker face by Michael Biehn, is a classic action star of the era. Throughout the game you’ll have him slaughtering baddies by the dozens while delivering one liners so cheesy that Big Arnie in his heyday might have thought twice. It’s packed with the most spectacularly profane language, and it takes risks with tutorials that actually moan about tutorials, and snarky onscreen tips that overtly patronise you.

Over the course of six or seven hours of play the joke wears a little thin at times, but there’s a sense of reckless, mindless fun about Blood Dragon that keeps it afloat. It’s not half as clever or witty as it thinks it is, but it’s a game that knows the value of a big explosion or a casual act of ultraviolence, and understands the power of a foul-mouthed comeback. 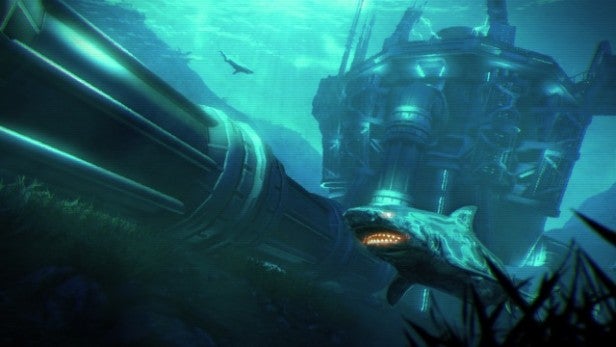 In terms of gameplay, however, Blood Dragon isn’t actually that much of a departure from Far Cry 3. The island setting might have shrunk and your hero is noticeably super-powered from the off, but this is still a game of open-world exploration, clearing outposts of bad guys and tackling the story-led missions. There are items to collect, side-quests to complete and skills and weapons to upgrade, but this is effectively the same game in a different skin. If anything, the side-missions are more repetitive than before.

In some respects, it’s a simplification. Skills are now added automatically as you level, and there’s an emphasis on close-quarters kills, with extra experience points doled out for these or for any senseless act of violence that looks cool. You only have a handful of weapons available, most of which are available from the off, and while these can be customised with suppressors, targetting aids and other modifications, but your arsenal has still been significantly reduced.

There’s still an ecology of local creatures to hunt and defend yourself from, but these play a reduced role in the new game. What’s more, Rex, as an eighties vision of a futuristic cyber-commando, is no mere mortal. He can run at high speeds without losing any stamina, and heal himself in a variety of gruesome ways. He’s not just talking tough – he is tough. 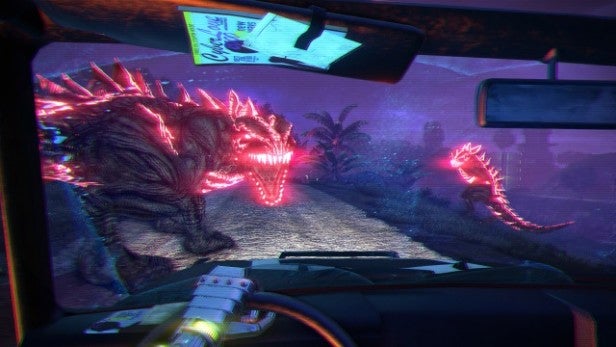 The main new addition is the titular dragons themselves, enormous laser-blasting lizards with a taste for human flesh. At first they seem like a threat – and sometimes they are – but they can also be an asset. Tear the cybernetic hearts from enemy soldiers and you can use them to lure the dragons towards your foes. Switch off the gates at an enemy stronghold and you can encourage the local dragons to pop in and out help clean the place out.

At first they seem almost invulnerable, but later on you’ll discover that a minigun can tame them, while mines and C4000 explosives can help level the odds. The dragons don’t transform the gameplay, but they do add a new dimension.