BroForce is probably the best reason the games industry has to close the coffin lid on Duke Nukem.  When Duke re-emerged from a near 15-year absence to star in Duke Nukem Forever in 2011, he felt around a decade past his sell-by date. Back in the 90s he was admittedly a canny pastiche of every action movie star from the 80s, but in an age where those guys had started taking the piss out of themselves in The Expendables, the Duke’s lunk-headed, low-brow visage was woefully out of date.

Some critics opined that perhaps the nostalgia for 80s action movies was no longer sufficient to fuel a videogame. With Broforce, South African games developer Free Lives Games demonstrates that, no, the likes of Arnie and Sly can still be grist for the design mill when it comes to developing a game – you just have to offer players something other than dick-jokes, colossal loading times and shonky mechanics.

BroForce comes on like the illegitimate offspring of Contra and Super Meat Boy shot through the tongue in cheek jingoism of Team America. In it, players are helicoptered around the globe, landing in terrorist-run hotspots. Their goal is to rescue any POW’s in the region and turn every bad guy they come across into paint with their weapon. At the end of the level they’ll meet Satan (as you do), cap him and then a helicopter picks them up, leaving the level ‘Liberated’. Rinse repeat. 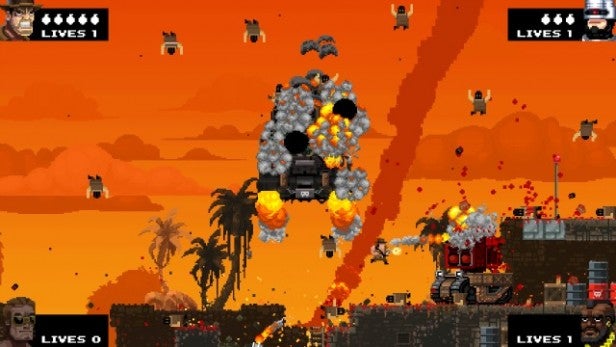 That simple description may make Broforce sound thin, but really, that’s not the case. The game offers quite a bit of depth through its line-up of titular ‘Bros’ who are essentially an extended riff on the protagonists from a ton of action movies from the 80s and 90s.

Players kick off the game with Rambro, but as they charge through the levels wasting enemies, they’ll rescue other Bros like Brommando, Brominator, Mr Anderbro and Bronan The Barbarian. If you know your action movies, you’re probably smiling by now.

On top of that, Free Lives hasn’t just used the likes of B.A. Baracus, MacGyver and RoboCop to pull in players hopped up on testosterone-fuelled nostalgia. Every single Bro in the game has a different advantage, attack or skill. Brommando, for example has a rocket launcher while Indiana Brones has a bullwhip and a pistol. Brobocop can shoot multiple targets while Bro Dredd can fire multiple bullets that seek out enemies. 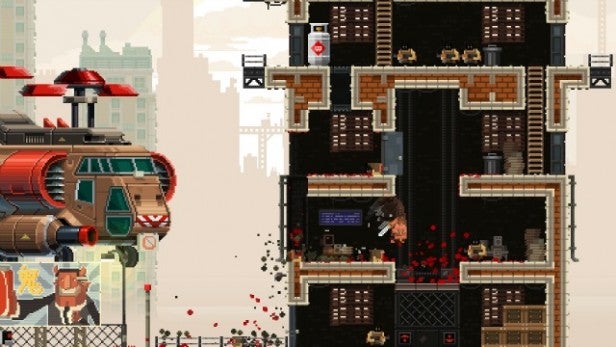 Players have one life and BroForce is a one-shot-one-kill affair. Rescuing other Bros grants the player extra cracks at the level they’re on, but this means that if they die, they take on the new Bro and their power set changes. This means if you’re comfortable playing with Bro Dredd or Brobocop and you die, you may come back as a Bro that has powers you’re not really keen on. In that instance, you have no choice but to adapt or die – but hey, that’s action movies for you.

BroForce’s second most attractive quality is its gleefully ridiculous level of violence. As players jump, climb and trundle through the game’s multiple levels, they’ll unleash a veritable world of pain on any poor pixelated sods they happen to encounter; vast tracts of the environment are turned into ashes, enemies are reduced to puddles of claret and explosions light up the levels until – at times – the Bro the player is controlling is barely visible. The carnage is so over the top it can’t see the bar beneath it. To call it ‘overkill’ would be to make a chronic understatement. 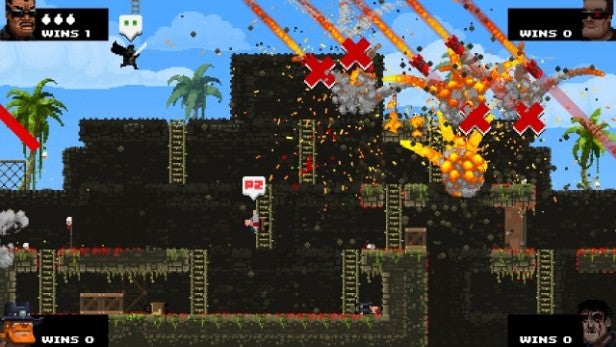 As players conquer foes in jungles, alien environments and, eventually, in the bowels of hell, BroForce ramps up the difficulty accordingly. As a platformer it’s not particularly challenging – players can recover from the odd mis-timed jump with a climbing mechanic – and on the whole they’re more likely to be done in by their own need to pepper every inch of the map with lead. The more enemies that flood the screen, the more chance they have of catching a stray bullet.

Players can also find themselves dying quite easily once their Bro gets lost in the action. As bullets, explosions and debris start filling up the screen it’s difficult to see your little Bro, and this can lead to some pretty irritating deaths. These occur more often when you’re playing in co-op with a buddy, incidentally, which make BroForce harder to tackle in tandem.