What is the Toshiba Chromebook?

The Toshiba Chromebook CB30-102 is a laptop that is all about firsts. It’s Toshiba’s first attempt at making a Google Chrome-powered laptop and the first Chromebook to feature a 13.3-inch screen.

At £250 it’s a little more expensive than 11-inch efforts like the Acer C720. For the extra money you get a more spacious keyboard, a bigger display with the Intel Haswell-fuelled performance that makes second generation Chromebooks a viable alternative to a cheap tablet or a Windows 8 laptop. 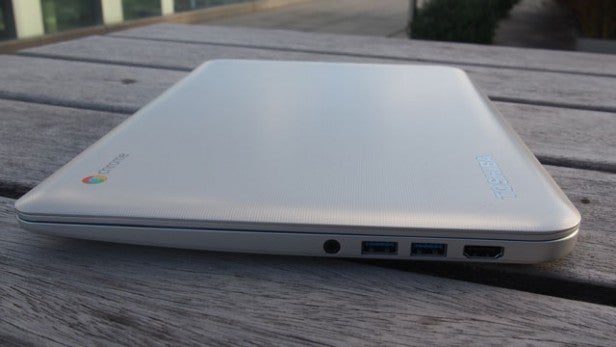 Toshiba is not the first, and certainly won’t be the last, to take a little design inspiration from a certain Apple laptop. Okay, so it doesn’t have the same aluminium exterior, but the Toshiba Chromebook’s plastic silver chassis and matt black keyboard with rounded-edged keys are obvious nods to the MacBook. And while the materials used might not be as luxurious, it still has an attractive charm about it, and doesn’t feel as cheap as sub-£250 price tag suggests.

Unlike the Acer C720 and the Samsung Series 3 Chromebooks, Toshiba Chromebook opts for a dimpled, textured finish on the lid and the base, giving it a subtle layer of grip. Measuring in at 20.2mm thick and weighing 1.5kg, you are talking near-13.3-inch-MacBook Air realms of size and portability. It won’t add substantial bulk to a bag, or feel too heavy to carry around in your hand.

In terms of physical connectivity, there’s a single HDMI port, two USB 3.0 ports and an audio jack alongside the charging port situated on other side of the body. Additionally, it supports Wi-Fi b/g/n and Bluetooth 4.0, so it ultimately matches most Chromebooks in the connectivity department. There’s an HD (0.9-megapixel) webcam in tow above the screen to take care of video chats and speakers situated on the laptop’s base.

Chromebook Pixel
aside, previous Google-powered laptops have not really been about looks
and Toshiba’s offering doesn’t do anything too new. It’s not ugly, though, and its understated and portable design will satisfy most willing to
stump up the £250 for it. 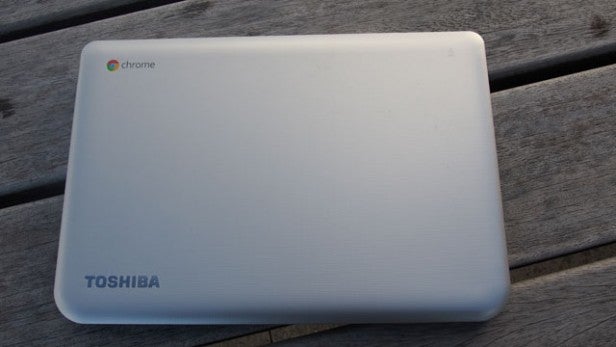 With the 13-inch MacBook Air and a whole host of 13-inch ultrabooks available, it’s surprising that it has taken this long to see a Chromebook equivalent. We’re glad it’s here. However, for the sake of keeping the price low, Chromebook displays feel the pinch and it’s no different with the Toshiba Chromebook. It’s not terrible, but it could be so much better.

The 1,366 x 768 screen resolution matches 11-inch Chromebooks although the larger display makes it more suitable for watching films on. While it can handle 720p HD video, the display lacks vibrancy and the exceptional sharpness you’d associate with more expensive 13-inch laptops like the Sony Vaio Pro 13 or Samsung Ativ Book 9 Plus. Colour accuracy disappoints as well so it’s not going to be a fantastic place to watch high definition video.

We really have some issues with the display brightness as well. The default setting is far too dim to be useful so you’ll need to crank it up reasonably high to get the best viewing experience. The screen is very reflective as well so it’s not very useful if you are planning to work outside.

Used as our main laptop for the review period
Tested for at least a week
Used consistent benchmarks for fair comparisons with other laptops
Reviewed using respected industry benchmarks and real world use
Next
Performance, Keypad and Trackpad Review