What is the Samsung Ativ Book 9 Plus?

Want something that’s a bit like a MacBook Air, but with Windows 8 and better specs?

Fulfilling this sort of need is what the Samsung Ativ Book 9 Plus is all about. It has a great-looking, light aluminium body, a fantastic 13.3-inch screen and the strong battery life that the Intel Haswell chipset provides. What’s not to like? Well, aside from the daunting £1,200 starting price, that is. 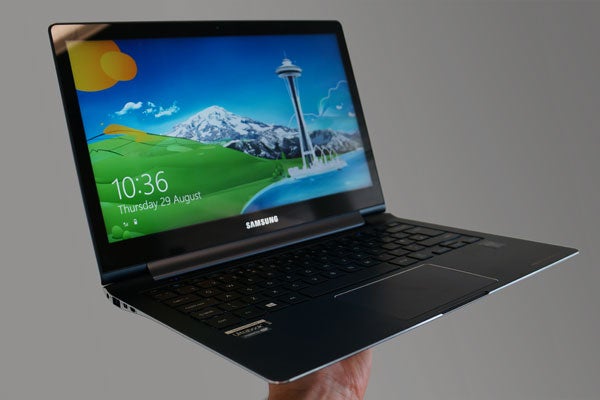 Bodywork is an important feature in a high-end Ultrabook like the Samsung Ativ Book 9 Plus. Its shell is all-aluminium aside from the toughened glass screen panel, giving it the same top-end, hard and cool feel as a Macbook Air.

The finish isn’t too brazen about its metal construction, though. The Samsung Ativ Book 9 Plus has a dark, almost blue-tinted, charcoal finish that’s consistent across the keyboard surround, the lid and even the underside. Maintaining a high-end finish on the bottom is the sign of a top-tier laptop – cheaper ones will tend to scrimp with basic plastic. 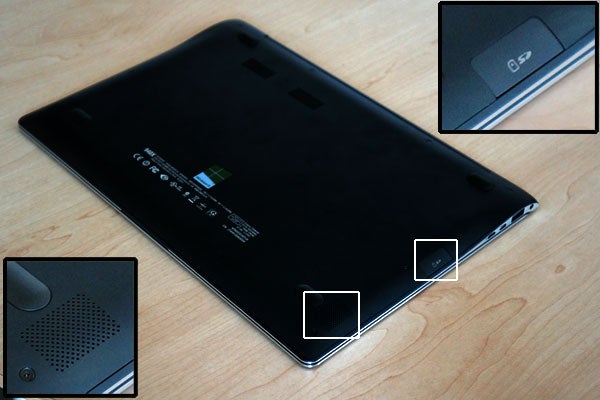 The speaker grilles and card slot are hidden on the underside

It’s not a shiny finish either, giving it a more demure look than something like the Asus Zenbook range. The Samsung Ativ Book 9 Plus isn’t entirely coy about its flashy aluminium bod, though. The edges of the laptop and the surround of the trackpad are left as exposed metal – a little nod that you’re not dealing with a bog-standard plastic laptop here. But it’s far from brash about it.

Bodywork-wise the Samsung Ativ Book 9 Plus is up there with the best laptops money can buy. At 1.3kg it’s light enough not to give you shoulder ache when slung in a bag, and is seriously slim. At the chunkiest point it’s 13.6mm thick.

The Samsung Ativ Book 9 Plus is never going to become as iconic as a Macbook Air, though. Only nerds will recognise it if you pull it out at Starbucks. But is that really a bad thing?

It also has something over Apple’s super-thin laptop. The Samsung Ativ Book 9 Plus has a rather ingenious hinge.

It opens up to the normal viewing position of a laptop just like any other, but then a second stage in the hinge lets you push it all the way back, to a full 180 degrees of rotation. This is still a laptop – there’s no 360-degree tablet-style hinge here, like that of the Lenovo Ideapad Yoga 11S  – but it does have its uses, such as sharing a screen with a bunch of people. 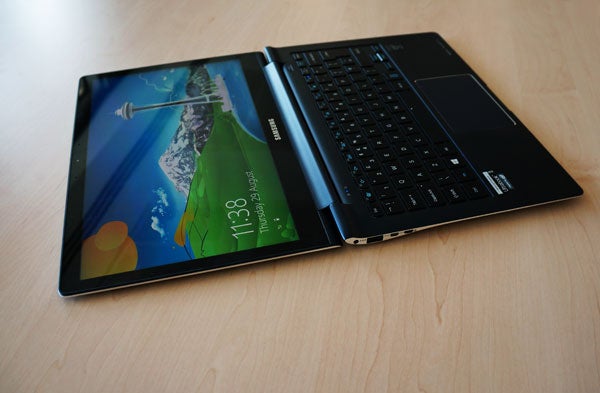 Connectivity is, like its Series 9 predecessors, decent but tailored to the skinny body of the laptop. On the left edge you get a micro HDMI port, a tiny proprietary Ethernet port and a USB 3.0 port. Around the other side sits another USB 3.0 port, a MiniDisplay Port and a combi headphone/microphone jack.

The Samsung Ativ Book 9 Plus comes with a little adapter cable in the box that ends in a full-size Ethernet socket (plugging into the proprietary Ethernet). And the Mini DisplayPort can effectively be used like an HDMI port, with the right cable. There’s also a full-size SD card slot on the laptop’s underside. 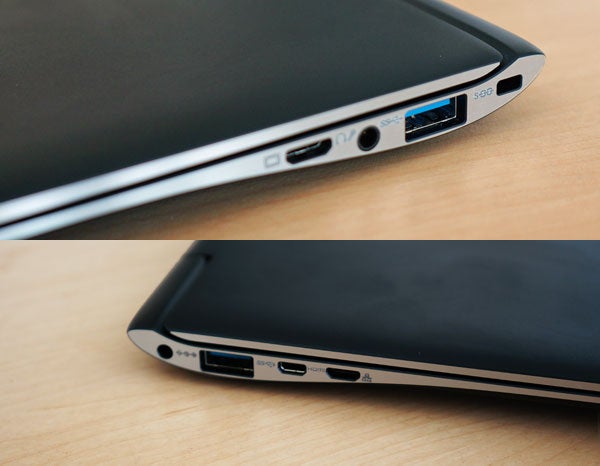 On paper the Samsung Ativ Book 9 Plus has an absolutely fantastic screen. It is 13.3 inches across, uses a PLS panel and a jaw-dropping resolution of 3,200 x 1,800 pixels. This makes it the highest-resolution laptop we’ve reviewed, ever.

This gives the laptop pixel density of 282dpi, which is much, much higher than the average laptop. As a result, the display is very sharp indeed. Now that we’re used to the super-sharp text of tablets like the Nexus 7 2, it’s good to see laptops finally start to catch up.

Colour and contrast are excellent too. Vivid but natural-looking colours and deep blacks make the display notable for much more than just its pin-sharp images. 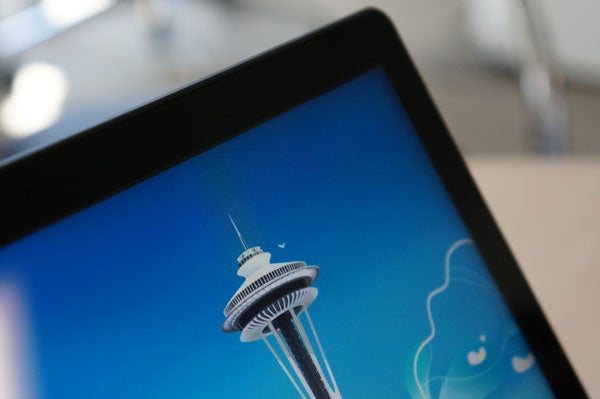 What also helps to increase the pop of images is the fully-flat surface of the Samsung Ativ Book 9 Plus’s screen front. The display appears very close to the front of the panel, giving the screen an impressive immediacy – its pictures have the zing of a mouthful of lemon. It’s partly down to the lack of a protruding bezel, but also the way the PLS screen is constructed.

There’s no air at all between the glass layer and the display panel, both reducing how thick it is and increasing clarity.

The Samsung Ativ Book 9 Plus’s PLS screen is also designed for great viewing angles. PLS is Samsung’s take on IPS, the type of screen used in iPads, and most high-end tablets – and is reportedly cheaper to make. The bit that matters to us, though, is that viewing angles are excellent: really top-notch.

There’s just one hardware downside. The Samsung Ativ Book 9 Plus’s top screen layer is quite reflective. There is a fairly effective anti-reflective coating on the screen, but take it outside and you will be able to see yourself reflected in that 13-inch display.

For use on a bright day, you’d be better off with a matt-finish laptop like the Samsung Series 7 Chronos. However, make no mistake, this is a gorgeous screen, and it’s one of the best reasons to buy the Samsung Ativ Book 9 Plus.

The one other screen problem is the way Windows 8 deals with a super-high resolution screen like this. Within the Samsung Ativ Book 9 Plus’s software control panel you can alter the size of fonts to avoid everything looking painfully small on the laptop’s screen. But even after fiddling this is not a computer for those with dodgy eyesight – and many third-party apps don’t cope with the screen resolution at all well.

Used as our main laptop for the review period
Tested for at least a week
Used consistent benchmarks for fair comparisons with other laptops
Reviewed using respected industry benchmarks and real world use
Next
Performance, Battery Life and Speakers Review