With the Google Chromebook Pixel, Google has sought to bring its Chrome OS to the fore, with a high-end, specs impressive and stunningly designed touchscreen laptop that stands up to the market leading likes of the Apple MacBook Air.

Once again igniting the increasingly heated Apple vs Google battle that is currently spanning the two company’s smartphone (iPhone 5 vs Samsung Galaxy S3) and tablet (iPad mini vs Google Nexus 7) offerings, the new Google Chromebook pixel is a true MacBook rival, with the anodized aluminium casing playing host to a raft of premium specs including the highest resolution found on any laptop, a stunning 2560 x 1700p touchscreen offering.

More than just a hugely impressive display within a stylish body, the Google Chromebook Pixel, the first laptop crafted solely by Google without any third-party manufacturing partners, is a true powerhouse of the portable computing scene with Inter Core i5 innards paired with 4GB of RAM. We go hands-on with the device ahead of the April 1 Google Chromebook Pixel release date. 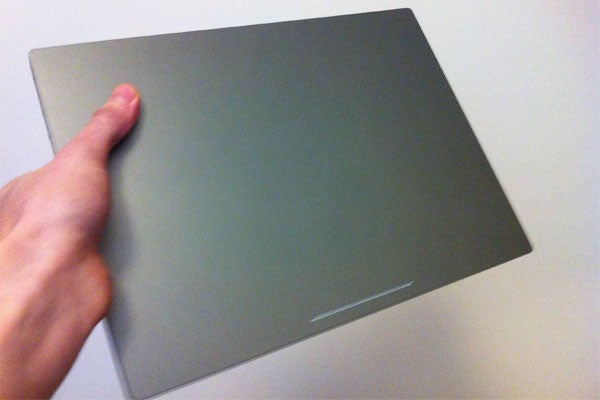 Although the Google Chromebook Pixel offers an air of Apple aesthetical likeness, the device is still unique enough to stand out from the crowd with a small light bar on the unit’s shell glowing in Google colours once the device is closed. With a well-spaced keyboard once again taking design hints from Apple’s leading laptops, the Pixel is a joy to type on with responsive, comfortable keys.

With a strong build quality, the aluminium body of the Google Chromebook Pixel feels good in the hard with the cooling metal well weighted, spreading the laptop’s comfortable sub 1.5kg heft evenly throughout the units 3:2 aspect ratio body.

Lining up at just 16.25 mm thick, the Pixel’s seamless full metal body is easily portable, with the slightly bulbous nature of the unit’s hinge detracting slightly from the otherwise smooth edge design. Despite this, thanks to the laptop’s comfortable, smooth and sturdy opening action, the marginal aesthetical issue of the hinge is quickly overlooked. 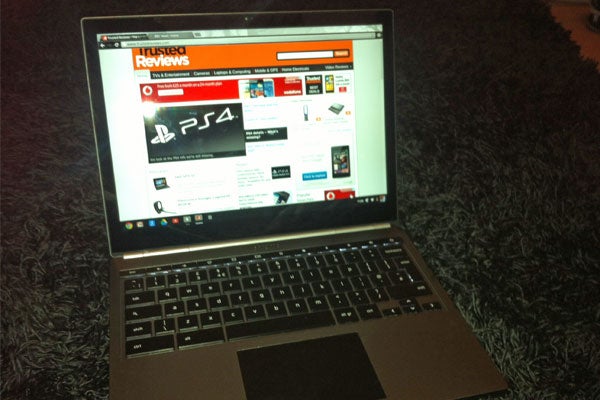 Offering truly incredible images, the Google Chromebook Pixel screen pairs a frankly outstanding 2560 x 1700p resolution with an equally staggering 239 pixels-per-inch image density, a PPI greater than that on Apple’s Retina displays, and one which offers the 3:2 screen a stunning 4.3 million pixels. The result of this premium combination is a visual experience unrivalled by anything else on the market.

With brilliant colours and a strong contrast ratio, the Chromebook Pixel is capable of creating images of lifelike clarity, with the display’s 400-nits brightness rating 25 per cent higher than that of any rival machines, creating an enjoyable viewing experience.

Not just a simple, single finger touch offering, the multitouch display also handles actions such as pinch-to-zoom with equal aplomb and a complete lack of fuss or fanfare.

With Google confirming that although it is responsible for piecing together the Chromebook Pixel, the device plays host to a selection of “components that are manufactured globally,” the Chrome OS laptop features a full-on bevy of premium innards from 4GB of DDR3 RAM to a 1.8GHz dual-core Intel Core i5 processor, a powerful partnership that ensures smooth, speedy access to all desired content.

As well as being zippy, the laptop hosts a 720 HD integrated camera that, on first-impressions at least, is capable of capturing strong, well rounded images that when displayed on the unit’s hugely impressive display look far beyond usual laptop expectations.

With the standard collection of two USB ports, integrated Bluetooth and inbuilt Wi-Fi, the Google Chromebook Pixel is missing one key connectivity option, especially for a device so heavily reliant on the web to function, an Ethernet port. Whilst this omission helps keep down the device’s thickness, it could prove troublesome when using the Chromebook Pixel in hotels or conference rooms.

On top of all this, the unit’s etched glass touchpad is extremely comfortable and responsive to use, offering accurate, intricate movements. 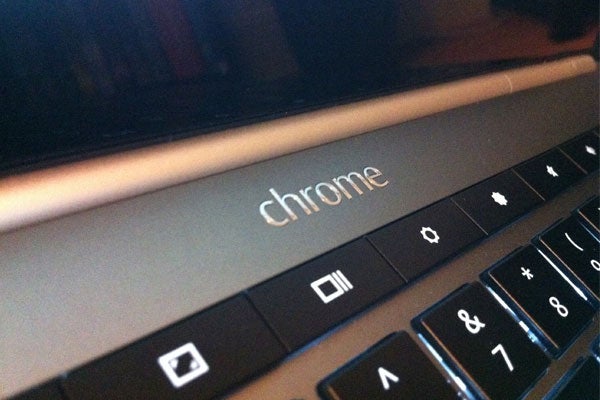 Whilst the Chrome OS isn’t without its merits, thanks in large to its cloud based nature that offers instant access to all content, is web centric OS can still be quite limiting.

Fast, responsive and easy to navigate, the Google Chromebook Pixel OS offers similar functionality to many of its manufacturer branded Chrome predecessors, with a smooth and fluid user experience partnering an enjoyable, streamlined browsing experience.

Further analysis of how the Pixel works alongside the Chrome OS will be required in our upcoming full, in-depth Google Chromebook Pixel review.

On first impressions, there is no denying that the Google Chromebook pixel is a stunning piece of kit, whether or not it can capture the consumer’s imaginations with its premium £1,049 price tag, however, is another question.

Fast, efficient, well styled and a joy to use, the Pixel is a brilliant device, that thanks to its stunning 2560 x 1700p touchscreen display is taken into the realms of the world beaters. A true MacBook rival could be on our hands.