The Toshiba Chromebook uses a 1.4 GHz Intel Celeron 2955U processor, putting it in line with the latest Google-running laptops. Intel’s Haswell-generation processors like this offer slicker, speedier overall performance than early Chromebooks. It has the same entry-level 2GB of RAM as the Acer C720 to take care of multitasking, and 16GB of on-board storage gives you smartphone-like capacity for files like photos, documents and video.

Boot up times to the sign-in page are around 7-8 seconds, which is impressively quick. It also handles the strain of multiple tabs with very little issue. Running separate tabs for Netflix, live streaming coverage of the Winter Olympics on the BBC, Facebook, Twitter and Cut the Rope there was no noticeable lag switching between the tabs.

Not much has changed in the Chrome OS since we last checked out a Chromebook. Google’s catalogue of apps is still headlined by Google Docs, Google Sheets, Google Slides and Google Search. Popular apps like Evernote, Spotify and Battlefield Play Free are also pre-installed although there are some applications included like Blackball Pool that are actually not supported by Chrome OS (you need to perform a workaround to get it running). App support is growing in the Chrome Web Store but not at the rate of other app stores and there are some high profile absentees. 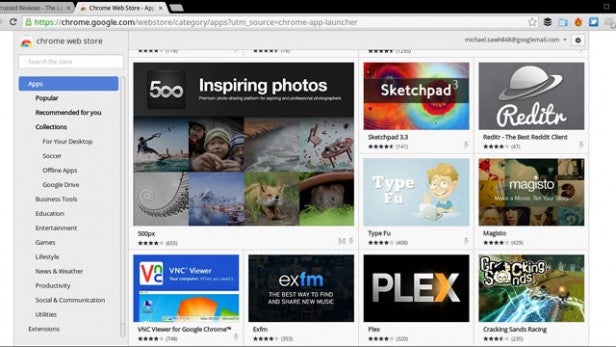 There’s no optional 3G or 4G support like you’ll find on the HP Chromebook 14, so you are relying on Wi-Fi here. Offline access is improving as long as you remember to adjust the settings to get the same type of access – without an internet connection it’s not much fun. As an operating system Chrome still has some growing to do, but it’s very easy to get to grips with once you understand how everything works.

One consistent feature in Chromebooks – and most laptops for that matter – is a front-facing webcam. In this case there’s a 0.9-megapixel 720p HD camera with a built-in microphone making it primed for Google Hangouts, as there’s still no dedicated Skype app. As you’d expect the webcam doesn’t offer much in the way of clarity or colour and it’s going to be a just-adequate camera for video calls. It doesn’t get much better for pictures, although you can apply a range of filters if that’s your cup of tea.

We were actually more impressed with the quality of speakers, a feature often neglected on laptops. The twin speakers situated in the base at the front of the laptop offer clear, well-defined sound that doesn’t destructively distort at loud volumes. And there is some subtle bass, making the Toshiba Chromebook a decent place to listen to music. 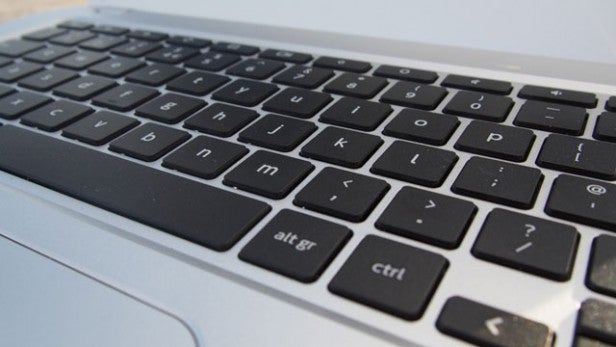 It looks like MacBook Air keyboard from afar but on much closer inspection there are some clear differences in the Chromebook’s keyboard. Of the 75 keys, there’s the usual array of shortcuts up top to control volume, brightness and to minimise/maximise the browser window.

One inconsistency across Chromebooks is whether they include a Caps Lock instead of the Search key. Here you get a Chrome-style Search key, which could prove a mild irritation if you’re after a very traditional setup.

The keyboards of 11-inch Chromebooks tend to be a little cramped so it’s refreshing to have a palm rest and keyboard that is more accommodating. The keys are slightly textured, but not as smoothly as the keys of a MacBook. This texturing feels good and there’s a nice amount of travel bouncing from one key to the next. It’s a comfortable place to type for long periods. 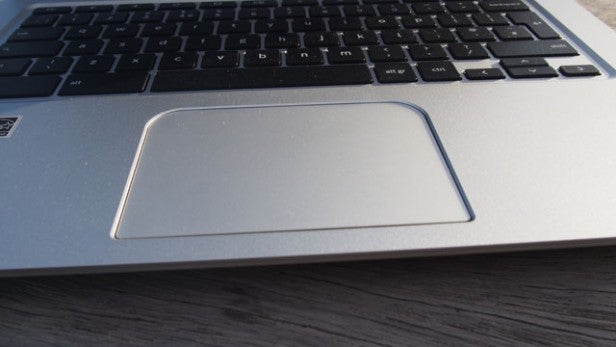 The keyboard is joined by a nicely sized multi-touch, button-less trackpad generally known as a ClickPad. Again. it’s not too dissimilar from the ones that have popped up on rival Chromebooks offering a nice, flat surface to support two-finger scrolling, multitouch gesture controls and the ability to zoom.

We didn’t however have the most pleasant experience using it. A lot of additional gestures require holding one finger down on the trackpad and swiping with another. It sounds simple enough but in practice it doesn’t work brilliantly. Trying to find the sweet spot to zoom into a location on Google Maps was very frustrating. For opening and closing tabs or hovering over the search bar, it’s perfectly adept at its job, it’s just when you need to do something more advanced where it begins to struggle.