The Sony Vaio Pro 13 is the world’s lightest 13-inch ultrabook, at least that’s Sony’s claims. Bag-friendly credentials aside, the Pro 13 has a fourth generation Intel Haswell processor and a full HD touchscreen display, which harnesses Sony’s TV tech smarts to give it an edge over rivals.

With a starting price of £999 and a sleek design that is a welcome departure from previous uninspired Windows 8 portables, the Vaio Pro 13 shapes up as a genuine rival for the 13-inch MacBook Air. Does it deliver? Here’s our verdict on the Sony Vaio Pro 13. 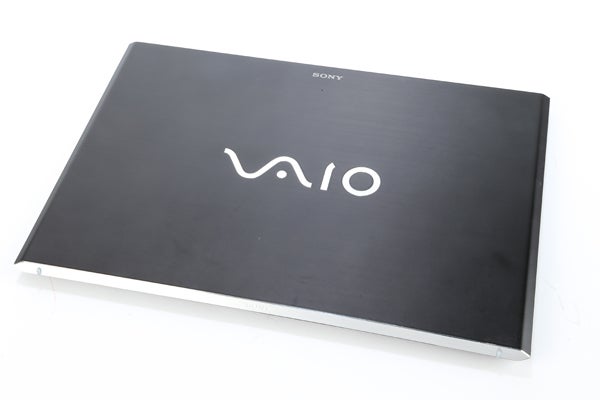 On the whole, premium ultrabooks have tried to mimic the aluminium unibody look of the MacBook Air, so it’s refreshing to see Sony taking a different approach with the Vaio 13. It uses the same flexible carbon fibre body used for Vaio Z Series laptops, but the Pro 13 is more angular than curvaceous and the result is a beautiful-looking laptop that you would not be embarrassed to pull out in public.

The Pro 13’s 1.06kg weight is its key claim to fame – its 290g lighter than the 13-inch MacBook Air (1.35kg) and 70g less than the already very light Samsung Series 9 (1.13kg). To put that into perspective, the Microsoft Surface Pro – a tablet – weighs 910g and it actually weighs more than the Sony Vaio Pro 13 when its Type Cover is included. Its 17.2mm thickness matches the MacBook in the slenderness department, but it really is a supremely slim and light ultrabook that we barely noticed when we slipped it into our bag.

The hinged lid raises the body just slightly off a table surface to offer a comfier angle to work. The hinge also hides the full-pitch chiclet-style keyboard, which comes complete with backlit keys, a brushed aluminium palm rest and an all-in one touchpad.

All the ports and physical connections are at the sides, with the A/C power adaptor on the left edge and all other major ports over on the right edge of the device. These include an SD card slot, headphone jack, two USB 3.0 ports (one with standby charging) and HDMI.

There are a couple of nice surprises inside the box, too. One is a handy wireless router device that plugs into the AC adaptor to provide a Wi-Fi network for up to five devices, and an HDMI to dual-VGA dongle so you can connect two monitors to the Pro 13 – a very useful feature for the home office. This comes as standard on our test version, the Sony Vaio Pro 13 SVP1321M2EB, but it’s a £60 option on the £859 version available direct from Sony’s website. 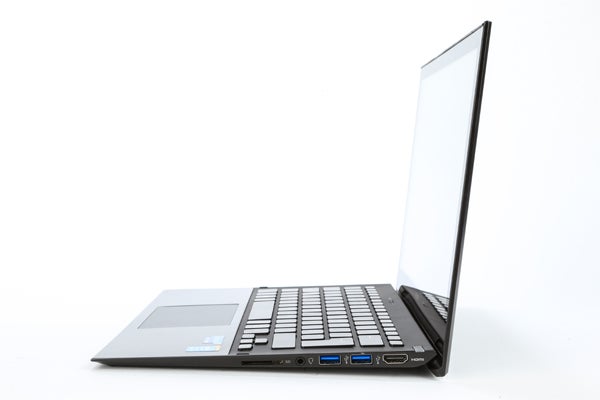 For all the Pro 13’s lightness, however, the 13.3-inch Full HD 1,920 x 1,080 display is clearly the true star of the show. It’s immensely vibrant and bright, which makes it great for watching high-definition films and video, and the touchscreen is responsive and adds a new dimension to the Windows 8 interface.

Sony has also incorporated Triluminos Display technology from its Bravia TV range of products and it really shows, delivering deep blacks that generate a rich picture quality and levels of clarity that are some of the best we’ve seen on an ultrabook.

This subjective view is supported by our analysis using our Xrite i1 Display Pro colourimeter tool, which measured an excellent 1,215:1 contrast ratio and a super bright 372 nits peak brightness. In colour tests the screen’s 6419K colour temperature is pleasingly close to the 6500K benchmark, as is the 1.31 DeltaE colour accuracy – anything below 1.5 is very good, especially for a laptop.

Viewing angles are particularly wide thanks to the IPS display tech, however the glossy finish on the screen does mean it suffers from severe reflections in sunlight and the odd finger smudge or two. Sony has also included its X-Reality mobile picture engine, which aims to clear up the sharpness of videos and movies, but it’s difficult to notice any substantial leap in quality for non-HD content.