TicWatch's S2 smartwatch doesn't quite live up to its sporty ambitions, but it's still great value overall.

What is the TicWatch S2?

Launched alongside the TicWatch E2, the TicWatch S2 is the slightly sportier variant. Both watches are the respective follow-ups to last year’s TicWatch S and TicWatch E.

The TicWatch S2 is now water-resistant to 5-ATM, letting you safely take the device to a depth of 50 metres, plus it sports a much more attractive design than the TicWatch S.

Otherwise, the feature set between the TicWatch S2 and TicWatch E2 is identical, so you’re getting a budget-friendly smartwatch that hits the right notes.

Like the TicWatch S before it, the TicWatch S2 is a smartwatch that skews towards the larger devices on the market. But while it’s bulky at just shy of 13mm in thickness, it carries its weight well. That’s important for any watch you might want to wear whilst out on a run.

Its polycarbonate build helps it to remain lightweight, all things considered. In addition, its build quality feels like a step up from the TicWatch S’ plastic-feeling construction. The TicWatch S2 is a lot hardier than the E2, with a MIL-STD-810G rating for durability and ruggedness as defined by the U.S. Military. Needless to say, it should hold up to some tough conditions. 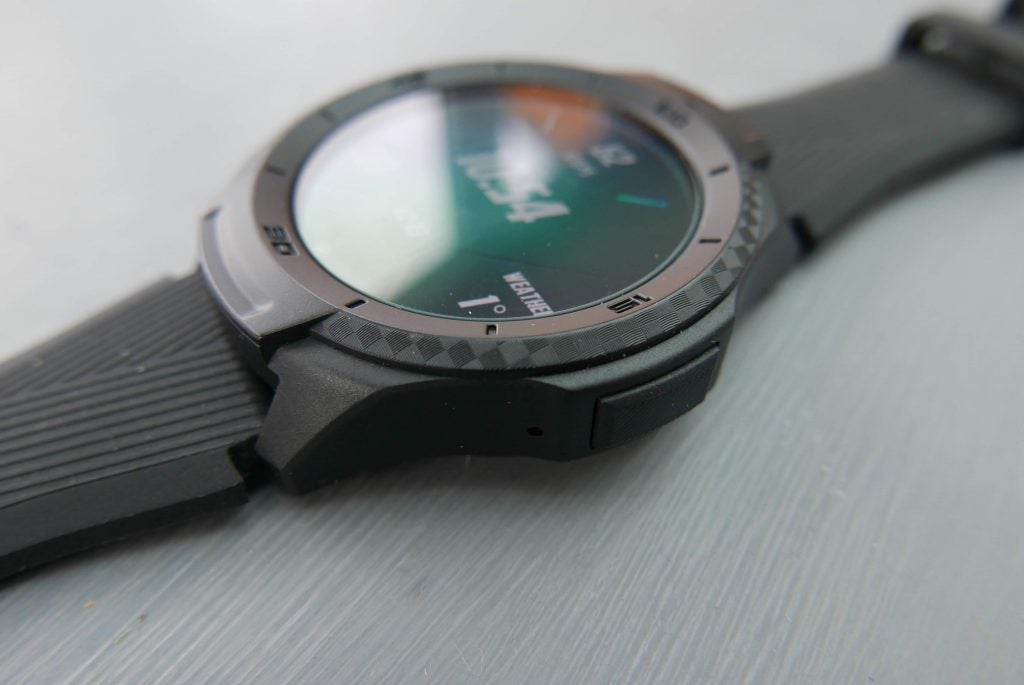 Its design has been refined elsewhere, too. The TicWatch S’ slightly garish-looking bright green chronograph numbering around the screen’s bezel has now been replaced by a more subtle engraving. It doesn’t really serve any function without the bonus of a rotating bezel, but it’s now less distracting, especially when you’re able to change the watch face to all manner of sports-friendly options.

Like the TicWatch E2, the single hardware button has been moved to the right of the display. In the previous generation, it sat on the left, which always felt a little strange. Thankfully, the button here is also easier to actually press compared to the recessed button on the original TicWatch S. 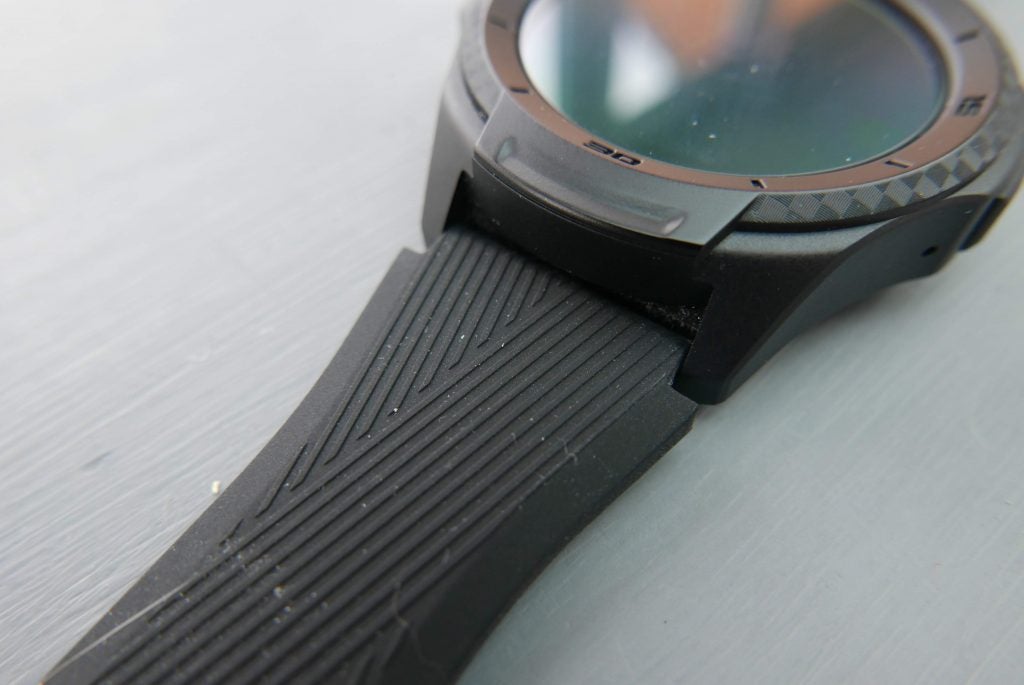 On the rear of the TicWatch S2 is a heart rate monitor and magnetic charging pins identical to those used by the TicWatch E2.

Handily, the TicWatch S2 now accepts standard 22mm straps, meaning you can swap out for some that better suit your tastes. The previous TicWatch S used proprietary straps due to the GPS antenna being built into the band itself.

The TicWatch S2 comes with a silicone strap. It offers a good amount of stretch and is therefore comfortable to wear throughout the day. The silicone also stands up well to sweat and moisture, so perfect for wear whilst on a run or swim.

The TicWatch S2 has a 1.39-inch fully circular, 400 x 400 resolution AMOLED display. That’s a decently sharp screen for a smartwatch at this price. Yes, you’ll spot pixels if you’re peering at the panel up-close, but day-to-day it isn’t something you’ll notice.

The screen displays vibrant colours and is bright enough to see outdoors, even on a sunny winter’s day. However, lacking an ambient light sensor, you’ll have to adjust the brightness manually. 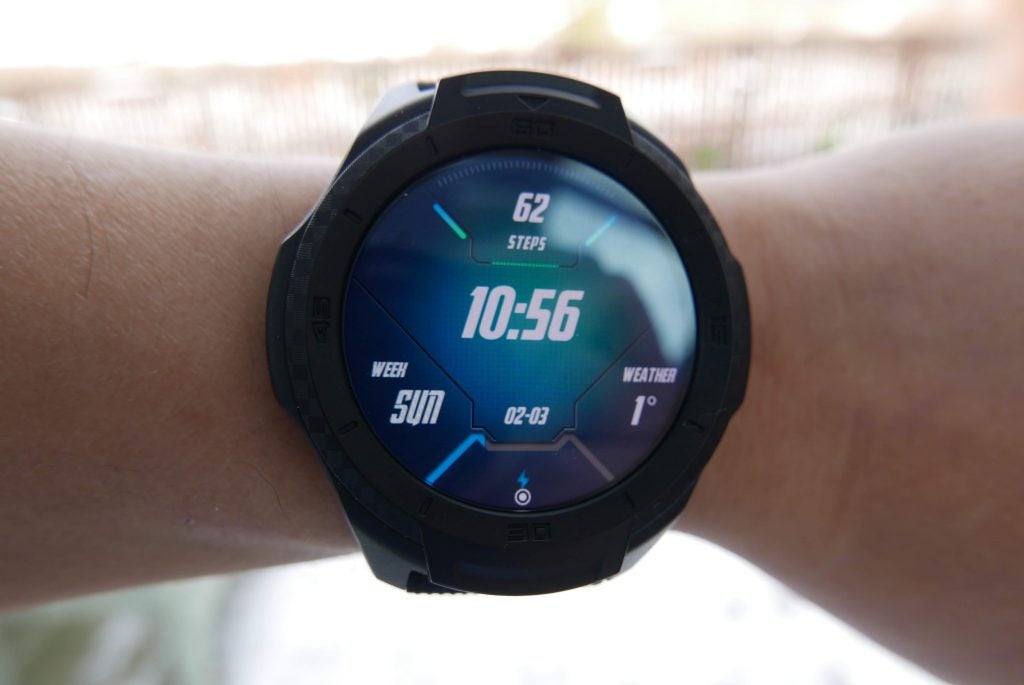 There’s an always-on display mode, which shows basic time and other complications even when the watch isn’t in use. That’s a bonus over the likes of the Apple Watch, which doesn’t show anything. This does have some impact on its battery life, however.

The wake gesture of rotating your wrist is now a far more consistent compared to the TicWatch S, which was one of my previous frustrations.

The TicWatch S2 has pretty standard specifications for a Wear OS smartwatch released in the past year. There’s a Qualcomm Snapdragon Wear 2100 chip alongside 512MB of RAM and 4GB of storage. That’s the same as the TicWatch E2. Again, it’s a shame that Mobvoi (the maker of the TicWatch) hasn’t waited for the Snapdragon Wear 3100 chip to be more affordable, but this could have seen quite a delay.

Performance is what you’d expect for a smartwatch with these internals. Apps fire up as swiftly as I’d expect – which is to say that it’s a chipset that’s beginning to show its age slightly but is otherwise responsive enough. Bringing up Google Assistant can sometimes be a little slow; it isn’t always immediately obvious if the voice assistant has heard your request since there can be a delay before it springs to life with a response. 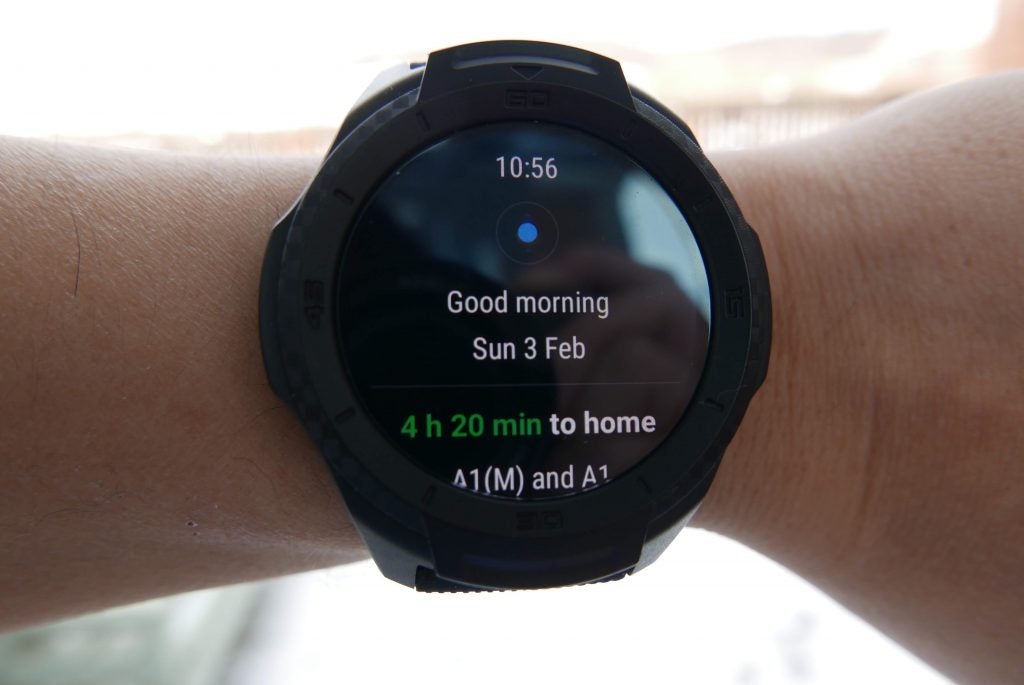 The TicWatch S2 runs the latest Wear OS, which means the refinements to the UI are present. Notifications are better presented and now come with improved quick-reply options for any incoming messages from WhatsApp, for example.

The one feature that still missing is NFC. Without an onboard NFC chip, there’s no Google Pay support for contactless payments. One of the best use cases for a smartwatch is the first time you pay for something just by tapping your watch against the payment terminal. Considering the TicWatch S2 is fractionally more expensive than the TicWatch E2, the absence feels more prominent here.

The TicWatch S2 has built-in GPS and GLONASS support (alongside a few other satellite standards), which is ideal for anyone looking for more accurate tracking data during their outdoor workouts.

Disappointingly, there’s no altimeter inside, so the TicWatch S2 can’t track your elevation data. This is useful not only for workouts – being able to understand your pace dropped or heart rate increased because of a steep incline, for example – but also for everyday activity tracking. 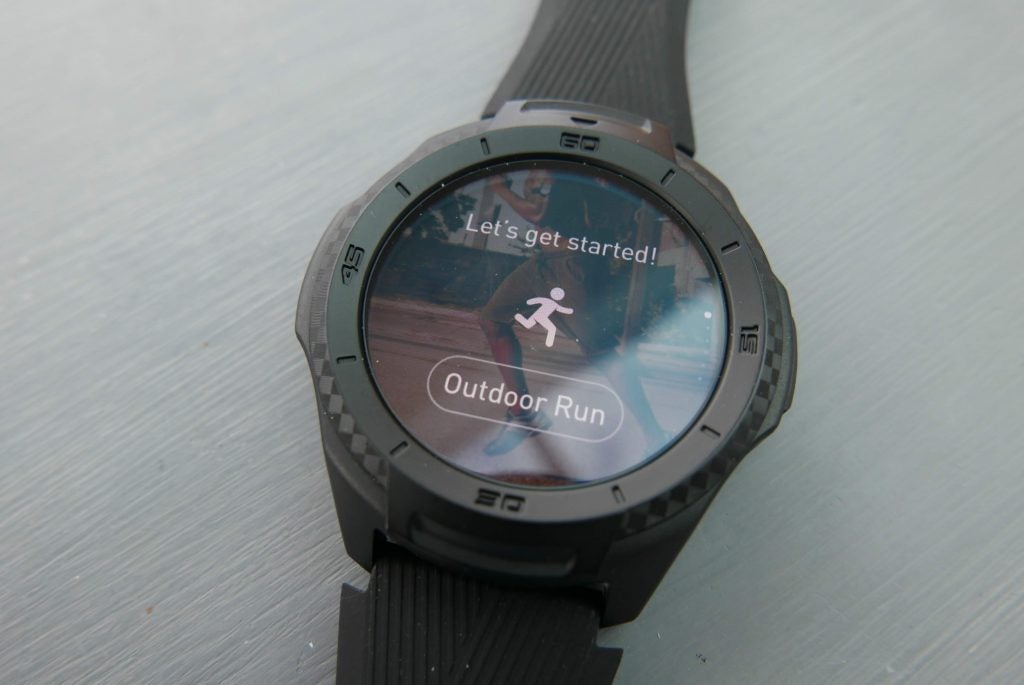 Many Fitbits use an altimeter to track how many flights of stairs you climb and let you set a floor goal. Features such as this can help promote healthier habits, encouraging you to take the stairs instead of the lift.

The watch’s GPS performance was identical to the TicWatch E2, which is to say it isn’t quite on the money when it comes to distance and pace, but still good overall. It can get a satellite lock relatively quickly, typically within 30 seconds, so you’re not held up too long before you’re able to set off. 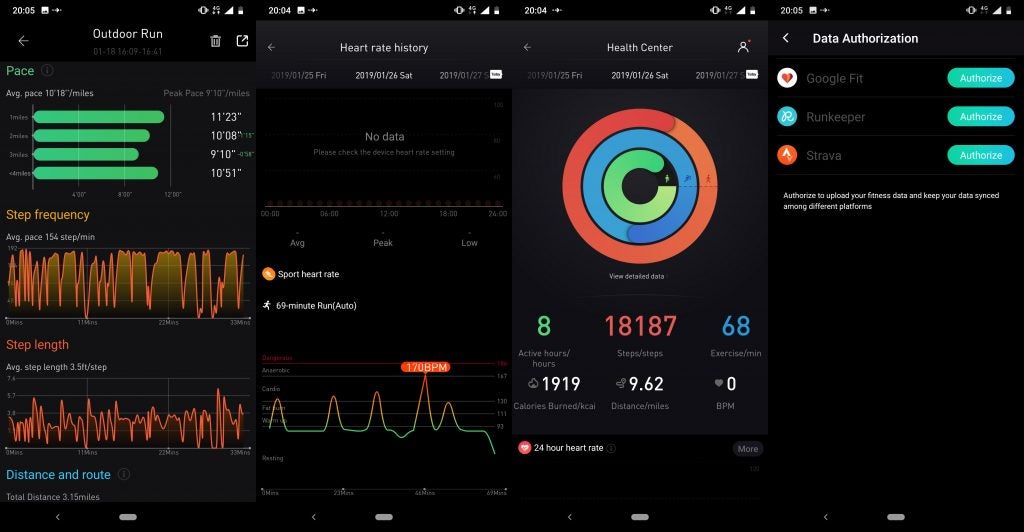 Considering this is the sports option, extra physical buttons for greater differentiation from the TicWatch E2’s design would have been desirable. It’s easier to hit a button whilst running to pause a workout or toggle between different metrics than swipe or prod at a touchscreen. It’s worse when trying to use a touchscreen in a swimming pool.

On that note, the swim-tracking is respectable. You’re able to set different pool lengths and the watch can detect different strokes.

The general activity tracking is relatively basic. There’s step-tracking and move reminders if you’ve not hit 250 steps within the active hours you set on the watch. There’s no sleep tracking at the moment, but Mobvoi has said this will come in an update.

The TicWatch S2 has a 415mAh battery inside, which will typically last around 36 hours before requiring a top up. Although not bad, it isn’t as good as an Apple Watch Series 4 or a Huawei Watch 2, which both get much closer to that 48-hour mark. This is with general use, with the always-on display turned on.

GPS is the biggest culprit in depleting any smartwatch battery, and here you’ll see about 10% loss after 30 minutes of tracking. So for any big runs, expect to have to top up the battery within a day. 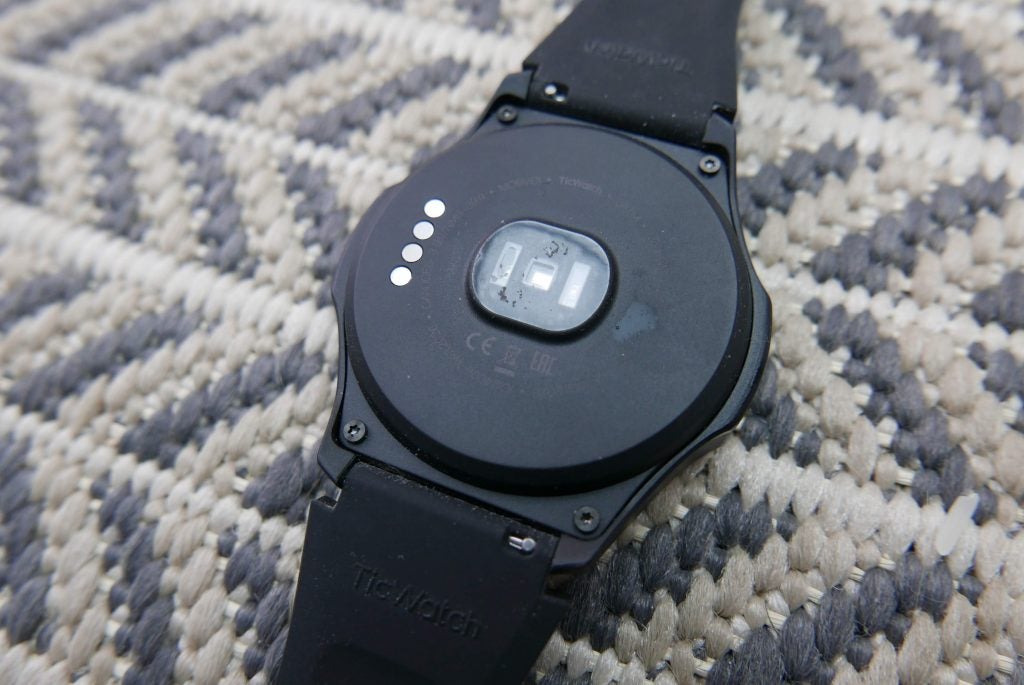 The charging mechanism has greatly improved over the original generation TicWatch S. It’s now a big puck-shaped magnetic dock that clips onto the back of the watch and holds firmly in place. In the previous device, it was attached only to the pins on the side and would always come off.

Why buy the TicWatch S2? 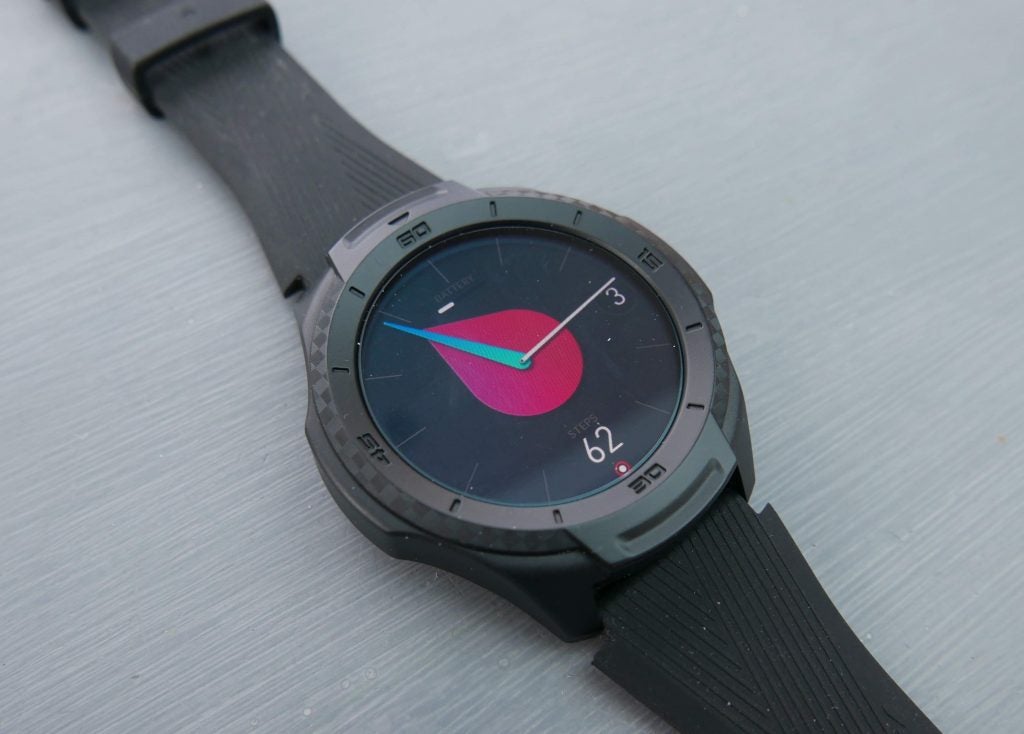 If you’re looking for a big, bold and budget-friendly smartwatch, the TicWatch S2 is a solid choice. It isn’t quite as sports-ready as I’d like, however. Next to the TicWatch E2, it feels like you’re really just paying a slight premium for the more rugged build rather than any extra sports suitability. This is one reason that it’s received a slightly lower score compared to the TicWatch E2.

The TicWatch S2 is also slightly harder to recommend when put alongside the Huawei Watch 2, which has dropped drastically in price since launch – at the time of writing, it can be had for around £160. This is a much more premium smartwatch and one that includes that all-important NFC with better battery life and overall sports tracking.

The TicWatch S2 would have been a great budget option if the Huawei Watch 2 hadn’t dropped so drastically in price.