What is the Mobvoi Ticwatch S?

Like the Pebble way back when, the Mobvoi Ticwatch range’s origins are on Kickstarter. But while the Pebble landed as a relative unknown, Mobvoi at least has some heritage in that its founders are former Google employees.

The Ticwatch is available in two variants, the Ticwatch S and Ticwatch E, and both were successfully funded on Kickstarter and are now widely available from the likes of Amazon. The models share many similarities, but the Ticwatch S reviewed here takes on a more sports-centric focus and design.

Both Ticwatch models hit a temptingly low price point for anyone looking to pick up a Wear OS smartwatch, although the S variant costs slightly more. Ultimately, for the money, the Ticwatch S gets a lot right.

The Ticwatch S is characterised by its 45mm watch face, which houses a 1.4-inch OLED display. It’s a good size for anyone who prefers their watch on the larger side, and is particularly useful for quickly glancing at during a workout. While the Huawei Watch 2 has a similar 45mm diameter, it has only a 1.2-inch display, so the Ticwatch S makes much better use of its size.

This is a smartwatch that doesn’t try to hide its sporty side, with its chronograph-like bezel around the display. The numbering is hard to miss in its vibrant green colouring. The green accenting is consistent across the three colour variants of the Ticwatch S, too: the watch is available in black, white and a matching green finish. 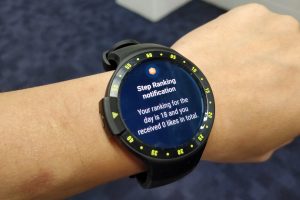 The bezel is an interesting design choice, and likely to be something that doesn’t have universal appeal. It stands out as a little odd when a big part of Wear OS smartwatches is customising the watch face. I’s also a shame that the bezel doesn’t serve any function beyond aesthetic; it doesn’t rotate in the way of the bezel on a Samsung Gear smartwatch.

At 13mm, the Ticwatch S is pretty thick as far as smartwatches go, coming in slightly deeper than a Samsung Gear S3 and Huawei Watch 2. Yet, somehow, it doesn’t feel as cumbersome to wear as the Gear S3. It weighs 45.5g to the Gear S3’s 63g and Huawei Watch 2’s 57g, which improves comfort considerably.

The Ticwatch S uses less premium materials owing to its budget price point. It’s all a bit plasticky, from the watch casing to the TPU strap. 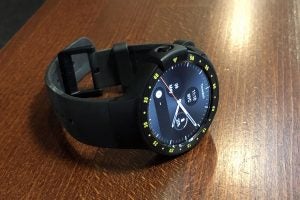 And, while on the topic of the straps, which come in the aforementioned three colour variants, you’ll want to choose wisely at the start. They can only be replaced with another proprietary strap from Mobvoi; this is because the company has put the GPS antenna inside the strap to help improve reception and accuracy.

The strap fastens with a standard buckle and there are two loops to take up the extra strap.

The OLED display has a 400 x 400 resolution (287ppi) and there isn’t a lot to complain about for the price point. It’s vibrant and sharp, and while it isn’t going to hit the 1000 nits brightness of more expensive rivals, it’s bright enough to see easily outdoors. The one annoyance is the gesture recognition, which turns the display on when you rotate your wrist. It’s really hit and miss and requires quite an exaggerated motion to get it to work consistently.

There’s an always-on display mode, which shows the time or complications when the watch is in standby, but this will drain the battery faster.

The display is flanked by just one hardware button – which, oddly, is on the left-hand side. It takes a little getting used to, as most watches put their buttons on the right. The button is also a little recessed, which can make it a fiddly to press without concentration. 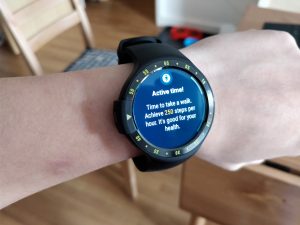 This means that, more often than not, you’ll be using the touchscreen for navigating the menus. This brings with it the standard smartwatch problem of your fingers obstructing a small display. This is one of the reasons I’m a fan of the Samsung Gear range’s rotating bezel and the Apple Watch’s Digital Crown.

The only real disappoint with the Ticwatch S’ design is that even though the model is meant to be sporty, it’s only IP67 water-resistant. So while it is indeed splash-proof, you’re not able to wear it in the shower, let alone in the swimming pool. While swim-tracking features would have been a nice bonus, simply not having to take off the watch to shower would have been welcome.

The Ticwatch S uses a MediaTek MTK MT2601 1.2GHz processor with 512MB of RAM – and, frankly, there’s little to complain about when it comes to performance. While more premium Wear OS models have tended to opt for a Qualcomm Snapdragon Wear processor, my initial concerns about performance were soon put to bed.

Swiping around the Wear OS menus and firing up the now respectable multitude of Wear OS apps all felt responsive, with no sign of frustrating stutters or slowdown.

Features such as Google Assistant are present, meaning you have access to Google’s digital helper either by holding the side button or using your voice. The integrated microphone and speaker allows for hands-free calling and dictating messages. The display’s more generous size also makes using the on-screen keyboard marginally easier. While you’re unlikely to be hammering out long messages, for a quick reply it does a good job. 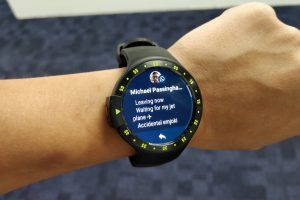 The one omission is NFC, so Google Pay is out the window. This is a shame – making contactless payments from your wrist is one of the most handy features of a smartwatch – but it’s understandable considering the price.

As an aside, I also used the Ticwatch S paired with an iPhone for a time and the experience is pretty lacking, although much of this is down to the way Apple locks down iOS. I was therefore unable to respond to messages from my wrist, and in general the experience proved far more basic.

With sports tracking at the heart of the Ticwatch S, it comes with GPS and a heart rate monitor – both requirements for any sports watch worth its salt. As it runs Wear OS, you also have a wealth of app options to hand for tracking workouts from Google’s default Google Fit, to Mobvoi’s own Fitness app to third-party options such as Strava. Most platforms will let you export and share your data elsewhere, too. 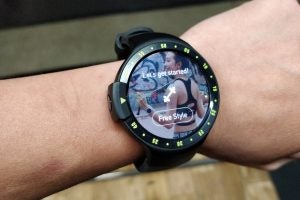 For the purpose of this review, I used the Ticwatch’s pre-installed Mobvoi Fitness app for tracking. The watch interface is pretty basic, but does make starting a workout such as an outdoor run simple and quick. The watch will need to find a GPS lock before you can set off, but I found this didn’t hold me up much before I could begin. The GPS antenna placement in the strap seems to help with lock speed: typically, the watch took less than 30 seconds before it said it was ready. 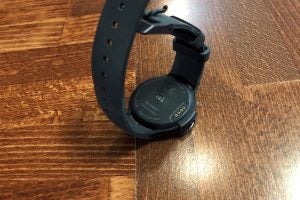 Heart rate monitoring was within the level of accuracy ‘d expect from a wrist-worn optical monitor. It can be a little slow to give a live reading if you suddenly start sprinting; otherwise, for more steady-state running, it kept up just fine and was typically within range of an Apple Watch Series 3 I was also wearing and have found to work well.

Similarly, distance and pace were right on the money. Sadly, the one thing the Ticwatch S lacks is an altimeter, so you won’t get any elevation data when running with just the watch. 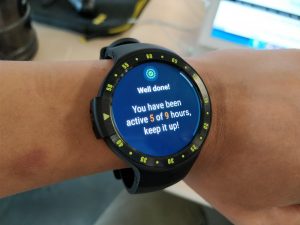 The Ticwatch S also functions as an everyday fitness tracker, counting steps and providing gentle prods to get up and walk if you’ve been sat down for too long. There’s also a Step Ranking app that compares your step count to other users nearby.

There isn’t any native sleep tracking with Wear OS, but there are third-party apps if you do want to track your sleep. It probably isn’t the most viable option as you’ll want to charge the watch overnight, however. 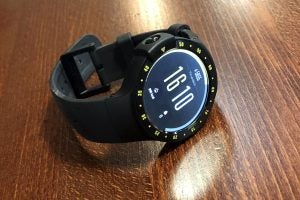 Mobvoi states that you can expect ‘up to 48 hours’ off a single charge, but that’s an optimistic estimation. In reality, I was seeing maybe a day and a half at best. This was with always-on display turned off and GPS tracking for sports not engaged. Taking the watch for an hour’s run and I was definitely looking at needing to charge the device overnight to ensure it wasn’t dead by morning.

Either way, getting to the evening of a second day isn’t really viable, so chances are you’ll need to charge this watch every night. This isn’t ideal, when watches such as the Huawei Watch 2 can make it to that second evening. As mentioned, I also used the Ticwatch S paired with an iPhone for a short while, and battery life was noticeably worse, barely making it through a day of regular use. This isn’t a Wear OS device I’d recommend using with an iPhone.

Charging isn’t the most elegant, either. A magnetic clasp attaches to the rear edge of the watch, near the button. The magnet is reasonably strong but it still feels a little fiddly.

Why buy the Mobvoi Ticwatch S? 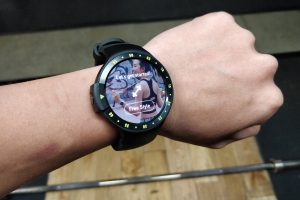 The Mobvoi Ticwatch S isn’t without its faults, yet there’s still plenty to like about it – especially considering its low price point.

If you’re looking for a basic Wear OS sports watch that’s comfortable to wear, it gets these right. The display is a much better size compared to the Huawei Watch 2, for example, and it’s decently sharp.

The only minor letdowns are the battery life and lack of NFC.

The Ticwatch S is a solid choice for not a lot of money – shame about the only-okay battery life and lack of NFC.