The Huawei Watch 2 has plenty to appeal to runners, but a bland design and small screen means it falls just short of the podium.

What is the Huawei Watch 2?

It’s a smartwatch that has good looks and lots of features. There’s GPS, a HRM and optional 4G. It’s also available at much lower prices now it’s been out a while.

Although there are two models available, there are far fewer differences between the two Huawei watches, at least in terms of features, compared to LG’s recent efforts. The standard model Huawei Watch 2 on test here is geared more towards a workout, whereas the Classic apes traditional watch designs.

As such, their constructions are significantly different. The standard option uses a thermoplastic case, with ceramic bezel, and interchangeable silicone straps that will endure the sweat of your workout. The Classic, on the other hand, uses stainless steel and comes with leather strap options. This makes the Classic model a tad heavier at 60.5g to the Sports’ 57g. 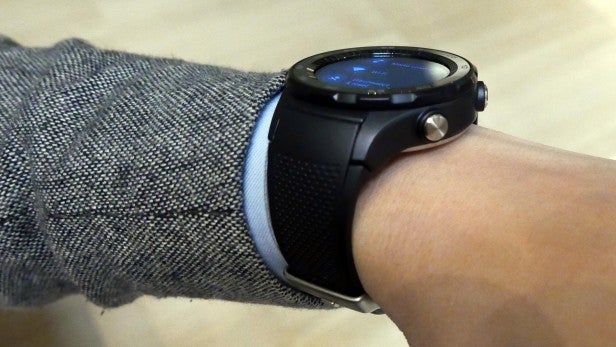 At 45 x 48.3 x 12.6mm, the Watch 2 is still quite chunky, but no worse than rivals such as the LG Watch Sport or New Balance RunIQ I was wearing at the time.

Still, for a watch this size, it’s super light and it’s barely noticeable when on your wrist. Its thickness is still an issue, though, and I found it getting caught in my tights sleeves fairly regularly. The strap is comfortable enough, although it feels rather cheap. Since the Huawei Watch 2’s straps are of the standard 20mm variety, you’re free to replace them if you want. 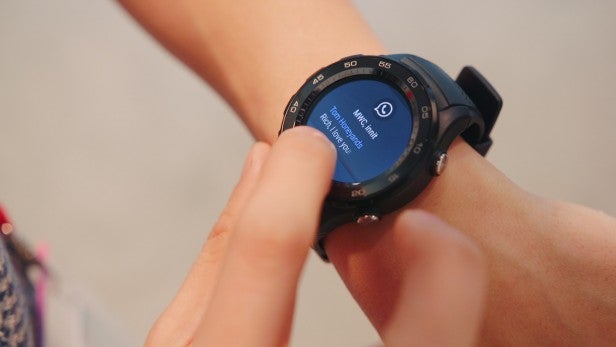 The watch is IP68-rated, which means it should be fine for 30 minutes in water up to a depth of 1.5m –  but even so, Huawei doesn’t recommend swimming with the watch. This will limit its appeal against devices such as the Apple Watch Series 2.

Overall, the design feels like a step backwards compared to the original Huawei Watch. Its predecessor looked sleek and stylish compared to the drab offerings from the likes of Motorola and LG at the time. The Watch 2 doesn’t stand out this time around; not unless you pick one of the more eye-catching colours, such as “Dynamic Orange” – and even then it’s for the wrong reasons. 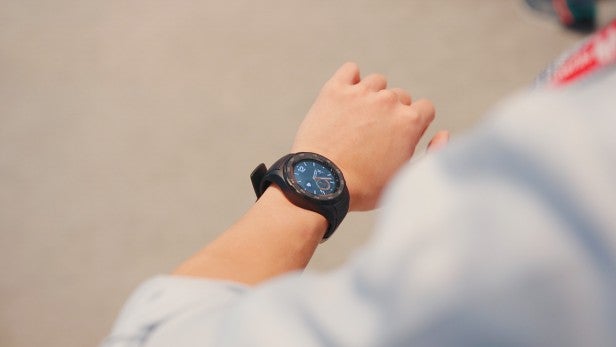 Both watch models have a 1.2-inch AMOLED 390 x 390-pixel display, which is bright and vibrant, and perfectly readable outdoors, with good viewing angles. It also comes with an ambient light sensor to automatically adjust the brightness.

The display is too small for my liking, especially when put next to the LG Watch Sport, which has a 1.38-inch display and a higher resolution at 480 x 480 pixels. Even the original Huawei Watch managed a 1.4-inch display. Then there’s the thick, raised ceramic bezel, which manages an impressive double-whammy of displeasing looks and being a hindrance to the operation of Android Wear.

This is because the OS now relies heavily on swipe gestures from the edge of the display to navigate, which means in the Huawei Watch 2 the chronograph-style bezels can get in the way. Combined with the relatively small display, it all begins to feel more fiddly than I’d like.

In addition, there are certain interface elements in Android Wear 2.0 that occasionally use the bottom portion of the display – the section that used to form the “flat tyre” of early Android Wear smartwatches – as a shortcut button, which makes swiping up and down the remainder of the screen difficult. Google Fit’s workout shortcut button is an example of this (below). 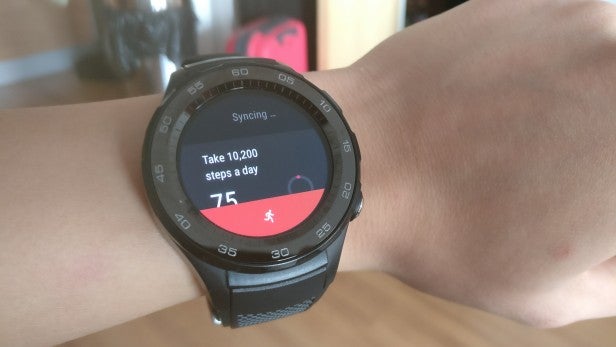 The Huawei Watch 2 has two crown buttons: one for accessing your list of apps while the second can be configured to act as a shortcut. Out of the box, it’s set to access the Workout app, so you can begin tracking runs or workouts. Neither crowns rotate, which is a shame, since such a mechanism could possibly have avoided the problems with the bezel and swipe gestures. It’s also a shame that the bezel itself doesn’t rotate, which is one of the best features of the Samsung Gear S3.

If you want to have the option of built-in LTE, then unfortunately, the Classic design isn’t the watch for you. LTE is particularly handy for those who prefer to leave their phone behind without worrying about losing connectivity – when going for a run, for example. LTE is present in the Sport model, however.

Combine the built-in LTE with NFC and Android Pay and it’s perfectly feasible to rely on only your smartwatch to get around. Thankfully, the likes of NFC, GPS, barometer and the heart rate sensor are available on every model.

Next
Performance and Android Wear 2.0 Review