One of the best value true-wireless sets available

What are the TicPods Free?

The TicPods Free are the first set of true-wireless headphones from self-described ‘leading AI company’ Mobvoi. This is a big deal as, while It may not be a household name yet, Mobvoi has a pretty impressive pedigree, having been formed by a bunch of ex-Googlers nearly six years ago.

Since then, the company has been releasing a series of top-notch gadgets, including the stellar TicWatch Pro smartwatch. The TicPods Free continue the company’s hot streak: make no mistake – if you’re in the market for a set of true-wireless headphones that won’t break the bank you should seriously consider the TicPods Free.

My only issue is that the TicPods’ atypical touch control system is a little finicky, which can make simple tasks like changing volume, let alone taking advantage of their advanced voice command features, an exercise in frustration. 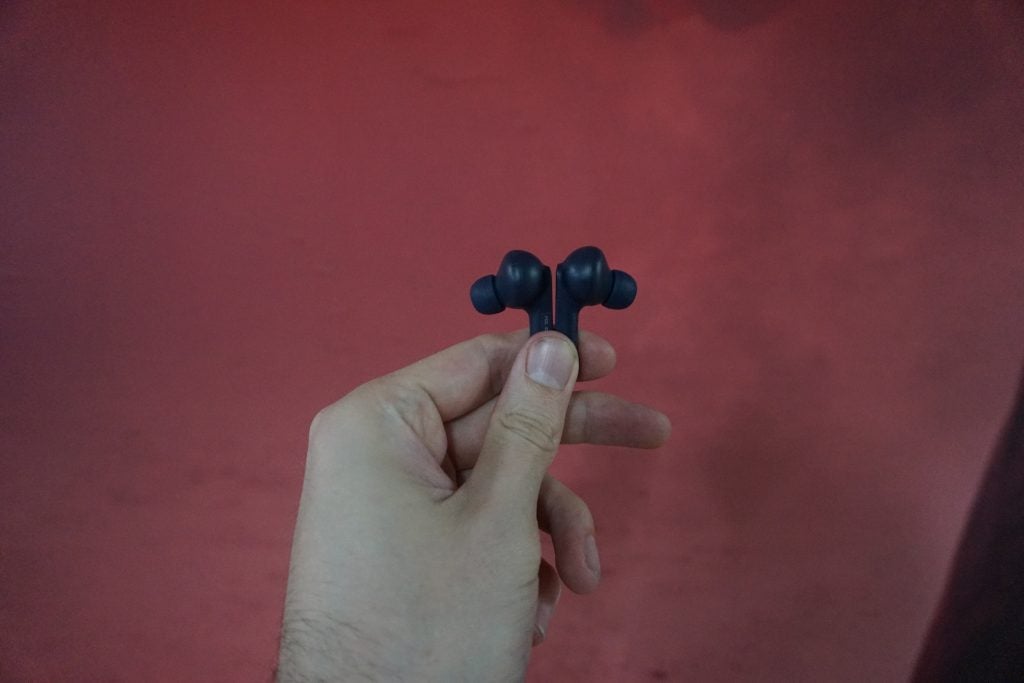 The TicPods Free have a Marmite design that combines elements of the toothbrush-esque Apple AirPods with more traditional true-wireless headphones, such as the Amps Air 2.0.

Specifically, the headphones have traditional silicon-tip options but have extended, stick-like areas on their bottom. This means, like the AirPods, they look a little ostentatious/silly when worn out and about, especially when paired with my review unit’s blue colouring.

Mobvoi has at the very least taken advantage of the extra real estate, loading the bars with touch controls and advanced noise-cancelling mics. The touch controls are in theory pretty awesome and let you do things like change track by double-tapping on the left or right bud and adjust volume by sliding your finger up and down the extended shaft. But in practice, I found them a little hit-and-miss.

The controls work well enough for the most part. Changing volume is easy and, though you look like a pillock doing it in public, the double-tap command works well enough 60% of the time. However, particularly in busy signal areas, the TicPods Free sometimes stopped responding to incoming commands. 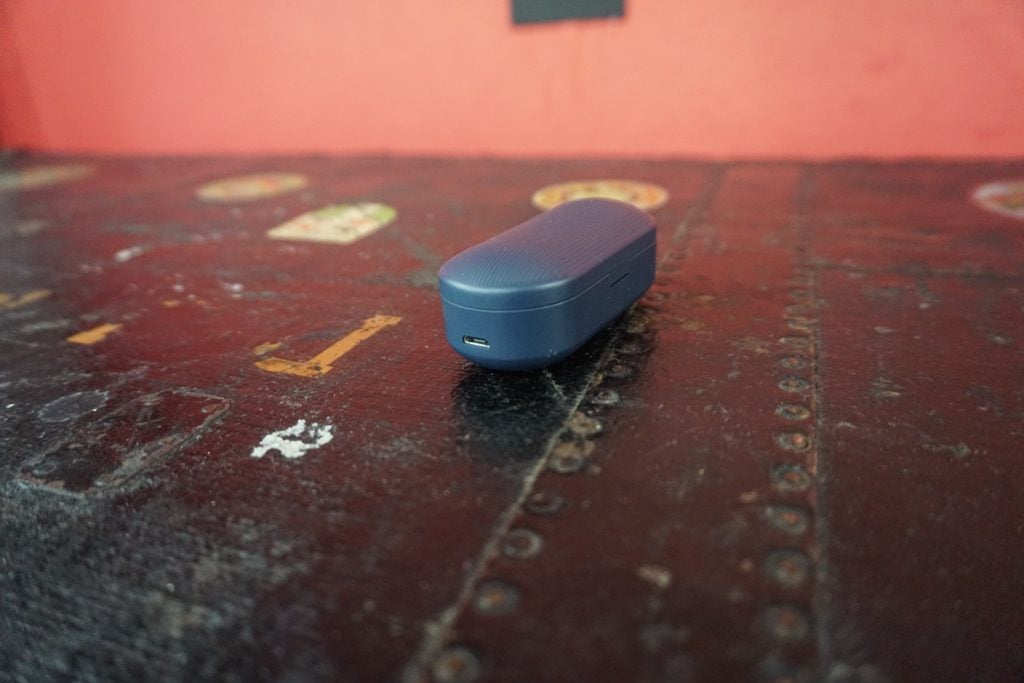 On more than one occasion I ended up looking like a crazy person, smacking the side of my head repeatedly in a misguided attempt to get the TicPods to change track on the walk home. They also had an annoying tendency to change track or volume when I was adjusting fit or taking a bud out to hear what a colleague was saying.

Thankfully the TicPods are otherwise excellent. The noise-cancelling mic was surprisingly reactive and picked up vocal commands when I activated Google Assistant (tested on Android), even on busy streets.

The two silicon-tip options will let most people get a solid seal and for the most part I found them very comfortable to wear. The auto in-ear detection also worked well enough and paused tracks when I removed one bud and the controls weren’t acting up.

Battery life is also solid, with the TicPods offering four hours’ playtime from a single charge. The charge case can store up to 18 hours of charge. This isn’t significantly better than the AirPods or Amps Air 2.0 but it meant I could generally get about a fortnight of regular use out of the TicPods. This involved using them on my morning and evening commute, over my lunch break and between sporadic excursions to the pub and shops.

My only other minor quibble with the TicPods Free is that the plastic used feels a little cheap. I wouldn’t trust them to survive accidentally being stepped on or being dropped too many times. They also get sticky fairly quickly when used for exercise, which is a shame as they are technically IPX5 water and sweat-resistant. 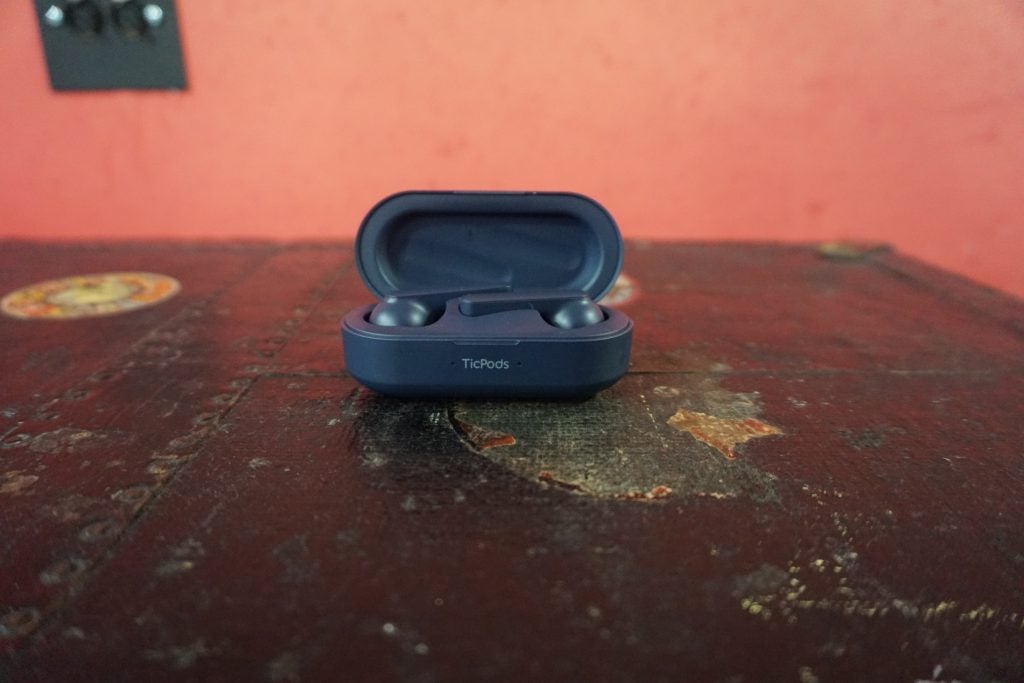 Tonal balance is marginally better than the Amps Air 2.0 and AirPods. High-end guitar parts don’t sing like they do on more expensive over-ears but they are nicely clean and well presented. Mid-range vocals are nicely separated from mids and lows, and manage to sound powerful without sibilance rearing its ugly head. Equally, rumbling walking blues bass lines don’t intrude on some of the subtler parts of songs.

The low end isn’t the most powerful around and bass extension could be better – especially compared to more expensive sets. Low-heavy genres like industrial and doom metal don’t have as much menace as a result but considering the TicPods’ price and true-wireless form factor, this isn’t terribly surprising. Outside of the Sony WF-1000X, you’ll experience this on pretty much any true wireless earphones.

The buds make up for this in other areas as well. The sound is wonderfully precise compared to many other true-wireless sets: rhythmic parts of rockabilly numbers had a toe-tapping swing that really did the genre justice. Dynamism is also decent, albeit again not industry-leading. Post-rock crescendos had a pleasing swoop and punk breakdowns hit with sizeable enough impact.

All-in-all, sound quality is more than good enough for the morning commute and casual listening when out and about.

As a final perk, the TicPods are less prone to dropouts than many competing true-wireless sets. Using them on the morning commute the connection held, even in busy signal areas that knocked competing sets offline. The only time I had any issue was in an insanely congested area, like London’s Waterloo station; problem zones for all wireless headphones. 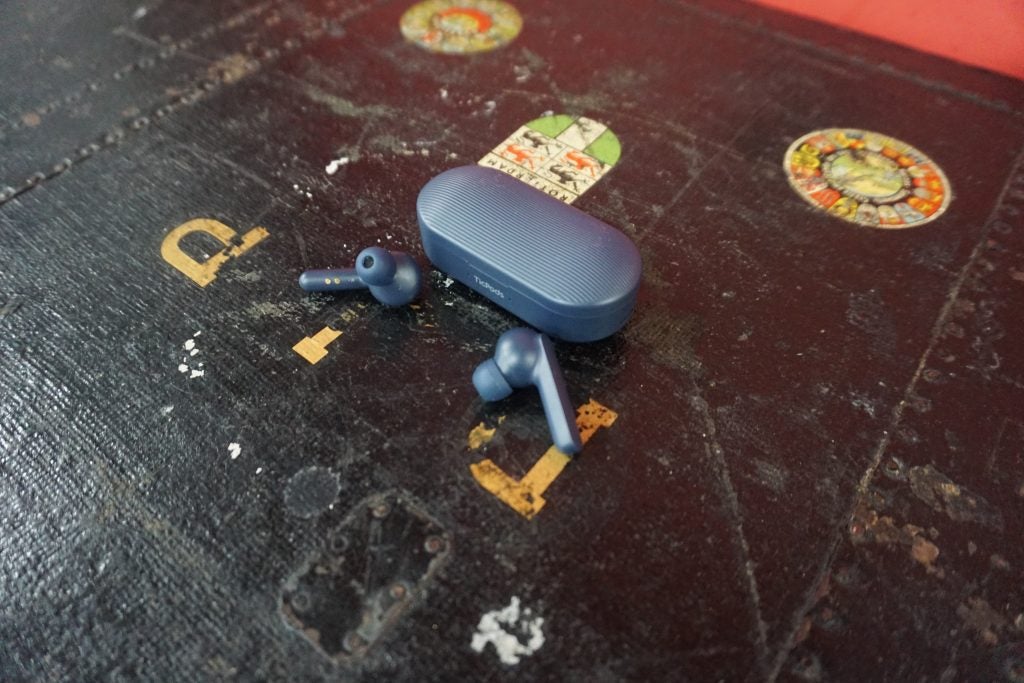 Why buy the TicPods Free?

If you’re after a set of true-wireless earphones that won’t break the bank then the TicPods Free tick all the right boxes. The earphones offer above-average audio quality, a comfortable fit and decent battery life. In nearly every way they’re superior to competing and moderately more expensive sets, like the Apple AirPods.

The minor issues are the earphone’s unreliable touch control system and Marmite design. If these put you off, you may still be better off going for the less ostentatious, but less advanced Amps Air 2.0.