The Amps Air 2.0 are the second pair of true wireless headphones from SOL Republic. At first glance they look all but identical to the original Amps Air, but under the hood, SOL Republic has made a few important changes. The biggest are the addition of Bluetooth 5.0 support, which radically improves connection speeds and new IPX4 ruggedisation.

These minor touches make them a great choice for people looking for an all-in-one true wireless set that can be worn during the morning commute and light exercising at the gym. Competitive pricing also make them a solid competitor to the Apple Airpods. However, Audio fanatics with cash to burn will be better off investing in a more expensive set, like the Sony WF-1000X, which remain Trusted Reviews’ true wireless set of choice.

At first glance the Amps Air 2.0 look identical to their predecessor. Both have the same ribbed outer casing and single button control, which lets you play and pause music or answer incoming calls.

The charge case also looks the same as the original, featuring a smooth finish and pebble shape. I’m also sad to say it still has the same USB and microUSB connections. Given how common USB-C is these days, I’d really have liked SOL Republic to have upgraded the case to the newer, faster standard. Battery life also remains around 2.5-3 hours, with the case having capacity to top up the earphones 15 times. 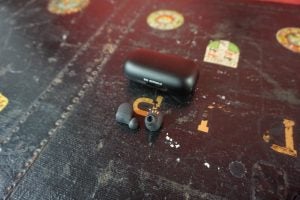 Thankfully, under the hood, the Amps Air 2.0 have had a few key upgrades. For starters, the case’s hinge has been rejigged to provide a stiffer closing mechanism. This sounds small but the original’s loose action was a constant annoyance. All too often I’d open the case to find the headphones had dislodged themselves in my satchel after an accidental opening. I’m yet to experience the issue on the Amps Air 2.0.

The improved Bluetooth 5.0 connectivity is another welcome upgrade that lets the Amps Air 2.0 connect to a smartphone noticeably faster than the original.

This is part of wider improvements to the Amps Air 2.0’s connectivity. Outside of the Apple Airpods, the Amps Air offer one of the stablest connections I’ve experienced on a set of true wireless headphones. Over the last two weeks I’ve experienced significantly less drop-outs than I did with the original Amps Air and competing wireless sets. 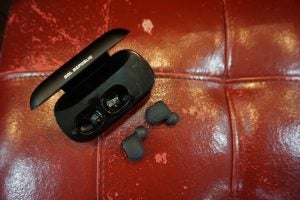 The only time I suffered ongoing signal failures was while walking through particularly busy areas, such as London’s Waterloo station, which renders pretty much every wireless set I’ve tested into a stuttering mess.

The buds also need to be re-paired less. The original left and right Amps Air buds needed to be constantly re-synced every time I took them out of the case. By comparison I’ve only have to do it once a week with the Amps Air 2.0.

Tip designs have also been improved to offer a more secure seal and better set of size options. The tips have a lighter silicon finish than the originals, which makes them significantly more comfortable to wear while exercising. The original Amps Air’s tips had a tendency to rub slightly during workouts.

The IPX4 ruggedisation is another feature gym-goers and runners will be pleased to see. The specifications means the Amps Air 2.0 will be able to survive sweaty gym sessions and the odd downpour better than their predecessor.

However, avid runners be warned. While the seal and fit is fine for regular commuting, I found they had a tendency to partially dislodge when I started sweating mid-jog. Personally I’d have liked to see them offer some wingtip or clip options, like the Jaybird Run, to get round the issue.

The final notable change relates to the Amps Air 2.0’s upgrade mic and newly added ability to take calls on both earbuds – the original Amps Air, bizarrely, only let you do it on one. 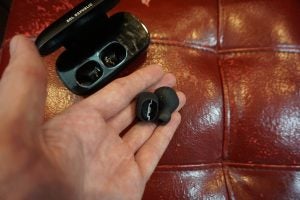 The mic still isn’t the best around and windy conditions will make it impossible for people to understand you mid-call. But it’s a definite step up, and it’s now possible to take incoming calls while walking down the street and be heard without shouting at crazy person levels – as I had to on the original Amps Airs.

SOL Republic claims it’s tuned the Amps Air 2.0’s sound “for better tonal sound balance and acoustic performance”. Switching between it and the original Amps Air, there have been some definite improvements.

For starters, tonal balance has been improved, with no one part of the sound dominating the other regardless of genre. The high end is also slightly better handled. Listening to attacking punk tracks, the hi-hat drums and high energy guitars were blissfully free of the slightly acidic quality I experienced on the older Amps Air.

Dynamism and detail have also been moderately improved and are better than what you’ll find on some cheaper sets, like the Motorola Stream. Dramatic crescendos in post-rock tracks had a more pronounced swoop and blues breakdowns felt a little more powerful. Though be warned that the sound still doesn’t come close to matching the Sony WF-1000X, which are the best set of true wireless in-ears. 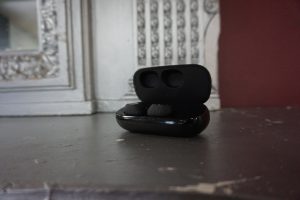 Bass extension and stereo image are both distinctly average, but not the worst on a true wireless set this price. Classic rock bass is audible, but it doesn’t have the low growl you get on more expensive Sonys, let alone over-ears such as the Nuraphone.

You don’t get a great sense of space on particularly layered compositions, like classical music, post-rock. Here subtle parts, like low-end layered guitar compositions can be lost and the sound can be a little flat. But again, this is an issue you’ll experience on pretty much every in-ear set of true wireless this price.

If you’re after an affordable alternative to the Apple Airpods then the Amps Air 2.0 are an excellent choice. They offer one of the stablest connections I’ve experience on a set of true wireless earphones, outside of the Apple Airpods.

Add to this solid, sweatproof build quality, listenable audio quality coupled with a competitive sub-£150 price tag, and the Amps Air 2.0 earn themselves a place as one of the best value true wireless sets currently available.

Slight issues with their fit stop them being a no-brainer purchase for people on the market for a gym set, however.