The Legend of Zelda: Link's Awakening is an excellent remake of an already enamoured classic, translating its unorthodox approach to a traditional Zelda outing into the modern day with absolute ease. Even after two decades and change, it still plays like a dream and looks even better thanks to its adorable diorama visuals.

I never played The Legend of Zelda: Link’s Awakening back when it was originally released, partly because I wasn’t born yet. But even after sampling Ocarina of Time, Majora’s Mask and countless others, this specific adventure remained untouched.

Now, I’m finally making up for lost time (sorry) and jumping into a superbly crafted remake of Link’s Awakening on Switch. Nintendo has taken the quirky, outward thinking adventure and jazzed it up for a new generation, while keeping a surprising amount of the original’s content intact. Many of the puzzles, enemies, items and elements of the plot are unscathed, but look better than ever.

Link’s Awakening opens with a gorgeous animated cutscene, boasting a colourful retro aesthetic as Link struggles with the bombardment of an ongoing storm. His ship is primed to capsize, unable to handle the waves crashing upon it. After a handful of chaotic frames, we’re taken to a lovingly rendered title screen backed by the iconic Zelda tune. From here, you’re thrust right into the thick of things. 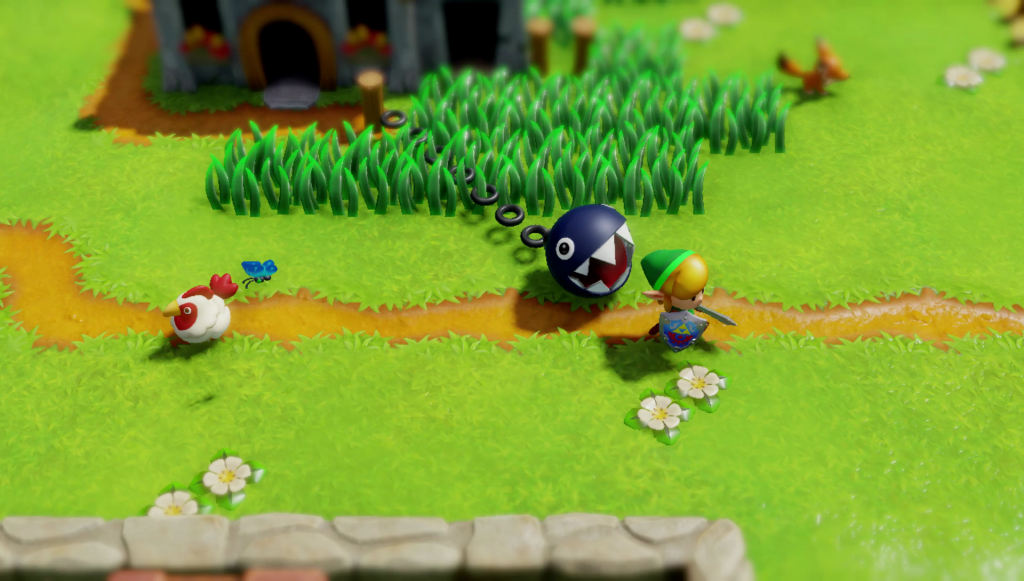 The world is filled with delightful nods to the early years of Nintendo’s history, including this adorable pupper

Koholint Island is immediately alien to our confident little hero. After washing onto the beach, you’re approached by a girl who resembles a certain princess. She whisks Link away, nursing him back to health before he’s ready to take on the charismatic island that awaits him. The only problem is, it’s filled with unusual creatures, sprawling dungeons and a few familiar faces from Nintendo’s other properties.

The central village is filled with delightful references that reinforce how much of an outlier Link’s Awakening is in the Zelda universe. A chained Bow-Wow barks incessantly at Link, excitedly prancing around. In the earlier stages you’ll take him for a walk, eating away at poisonous plants to gain access to a dungeon. You’ll also find adorable collectibles ranging all the way from Yoshi to Kirby.

It feels like a love letter to a specific time of Nintendo’s history, before it penetrated the space of three-dimensional platformers. Now with this remake, the original’s bizarre, unconventional vision has more room to express itself, splendorous visuals showcasing how well the underlying world design has held up after 26 years. 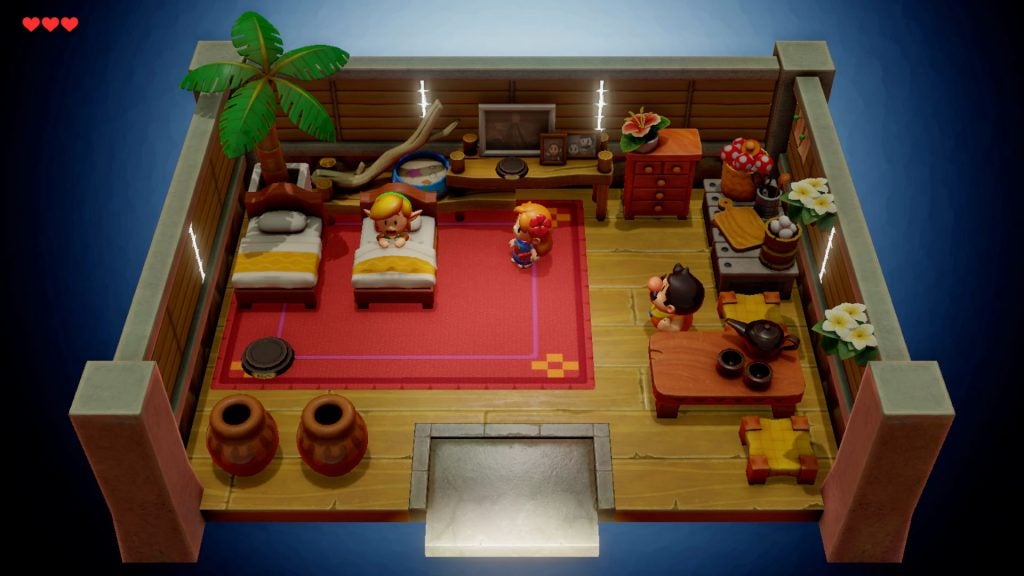 Despite its quirky personality, Link’s Awakening is largely familiar on the gameplay front. You’ll explore a sprawling world made up of cleverly cohesive regions, most of which contain a dungeon you’ll come to conquer across the solo campaign. There’s melancholic forests, poisonous swamps and scorching deserts to contend with, and each locale introduces more complicated mechanics to tackle.

The first duo of dungeons are woefully simplistic, with only a handful of puzzles having me scratch my head in confusion. From the third onwards, they feel akin to multi-faceted labyrinths hiding oodles of secrets alongside the main objective. Bombs can expose hidden chambers or a clever use of magical powder to light myriad torches might reveal treasure chests for the taking. Every room holds the possibility of surprise, which is good since there’s plenty of backtracking.

You’ll come to know Koholint Island like the back of your hand, since with the procurement of new abilities, further avenues of exploration are unlocked in areas presumed exhausted. The best example of this is the Strength Bracelet. Acquired in the third dungeon, this trinket allows Link to lift boulders atop and hurl them into oblivion. At this moment, countless new areas are opened up, encouraging me to revisit every spot on the map just in case a stray Piece of Heart remained undiscovered.

The second you feel like Link’s Awakening is running out of tricks, a clever new item or universe-expanding mechanic is introduced to shake things up. Bombs provide a way to access sensitive caves, while the bow results in long-range combat encounters and nuanced puzzles. It’s a traditional Zelda experience through-and-through, and this dedication to the source material is arguably a double-edged sword. It’s brilliant, but hardcore fans might approach this reimagining hoping for something more. Luckily, there’s a few things we’ve yet to delve into. 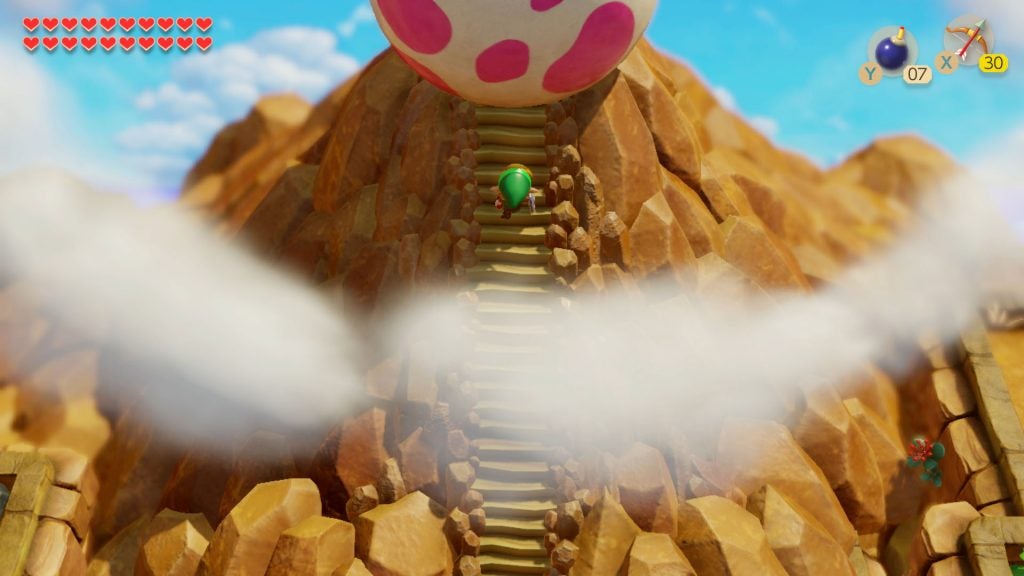 While the general structure of Link’s Awakening remains untouched, fresh changes ensure the experience feels distinctly modern. Mini games such as an arcade-esque claw machine and fishing have been updated with realistic physics, offering a better challenge. I even screamed at the claw machine in frustration as a prize left its grasp in the closing second. Just like real life! Fishing is enjoyable, and there are sufficient rewards for bagging larger catches that I’d recommend sticking it out.

You can also build your own dungeons, but don’t let this idea excite you too much, since it isn’t as fully realised as some players might hope. After reaching a certain point in the game, you can visit a character in his shack and begin putting together your own contraptions. You’ll start with a rather small selection of pieces, but more components will be unlocked after completing dungeons and coming across new enemies.

After piecing together your own dungeon, it can be completed in time attack modes. It proves to be a fun little distraction, but I couldn’t see myself returning to it time and time again. Even worse, you can’t share your curated labyrinths with other players, preventing this mechanic from becoming a Zelda-flavoured Super Mario Maker.

You at gain rewards for making it through these bespoke dungeons yourself though, so there’s at least some incentive. The use of select amiibo will also result in bonus characters, items and other neat additions, which hardcore fans will definitely get a kick out of. 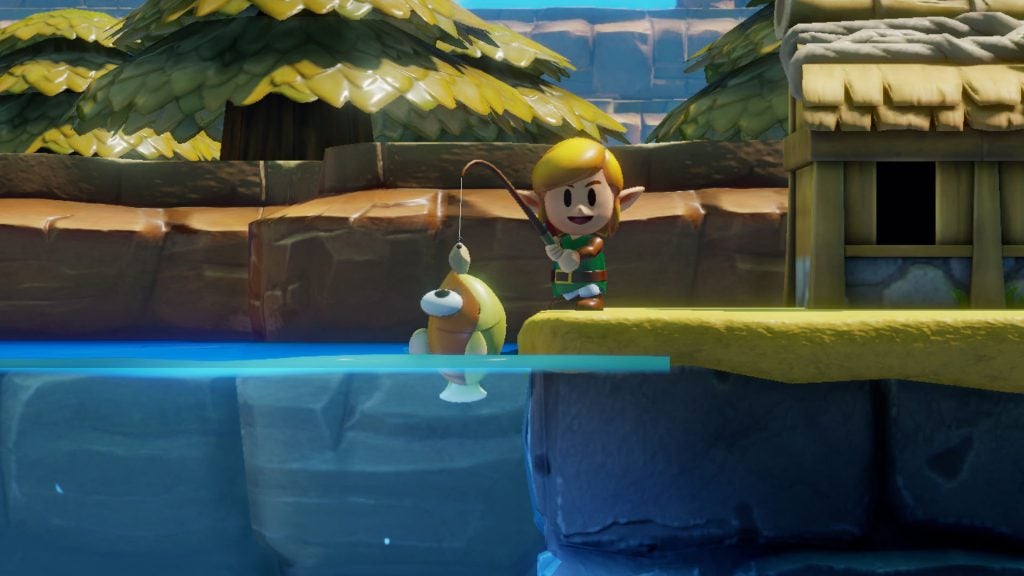 Fishing is an enjoyable distraction, and Link’s Awakening is filled with little delights away from the main path

The Legend of Zelda: Link’s Awakening is an excellent remake of an already enamoured classic, translating its unorthodox approach to a traditional Zelda outing into the modern day with absolute ease. Even after two decades and change, it still plays like a dream and looks even better thanks to its adorable diorama visuals.

At times, the faithfulness to the original Link’s Awakening can feel like a detriment, as if this game could have been something more than an admittedly gorgeous remake – and the addition of dungeon crafting doesn’t remedy that. But in the end, that’s a small complaint in an otherwise exceptional adventure. If you have a Switch, it’s time to add another essential exclusive to your library.