Pokemon Sword and Shield is an excellent entry in Game Freak’s iconic franchise, pushing the series forward in some exciting ways while never forgetting the roots that made it so loved in the first place. While it underwhelms in its visuals and under-baked use of new ideas, the act of exploring Galar and catching creatures remains as delightfully compelling as it’s ever been – and that’s what really matters in the end.

A fully-fledged console iteration of Game Freak’s Pokemon series has been a long time coming. Fans have waited decades to see how the RPG series would fare on a platform with more power, no longer held back by the constraints of a handheld – Pokemon Sword and Shield is that long-awaited evolution.

The duo of titles push the series further than it’s ever gone before. However, in the end, isn’t quite enough to blaze the futuristic trail it must walk going forward.

However, what we have here is a new benchmark for the series, evolving the formula with ample quality of life improvements and a sprawling world I’ve spent hours exploring. Sword and Shield is a triumph for the franchise, even if it doesn’t push the envelope far enough. 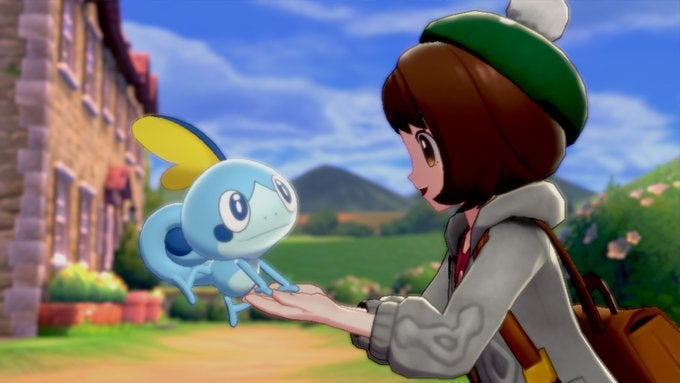 The first meeting with your starter Pokemon is disgustingly adorable

The opening moments of Sword and Shield are everything you would expect. After creating an ambitious young trainer you’re given the usual exposition of Pokemon, their integral role in society and how they exist alongside humans in a world that prospers from their presence. They’re one big happy family, even if hours are spent making them fight in elaborate combat tournaments.

From here, you pick between three new starters – Sobble, Scorbunny and Grookey. We’re #TeamSobble here at Trusted Reviews, but there isn’t a wrong choice to be made. This trio are just a few among hundreds of new Pokemon you’ll encounter across Sword and Shield. The majority of the original catalogue of pocket monsters is sadly absent, a controversy which has had fans in uproar ahead of release. But, if I’m brutally honest, I seldom missed them.

Sword and Shield innovates within the franchise on so many levels it doesn’t need to hang desperately to the legacy of what came before it, carving a path in the region of Galar all of its own. Inspired by the United Kingdom, the continent you explore is positively vast, with massive cities, quaint towns and humble countryside plains being just some of the locales you’ll stumble upon. For the most part, it looks lovely, boasting a fully three-dimensional experience which brings Pokemon to life like never before.

However, it can look somewhat rough in places, with textures on distant buildings and foliage looking particularly irksome in docked mode. It’s far from a dealbreaker, and the overall art design shines through, but the visual benchmark set by the likes of Breath of the Wild and Super Mario Odyssey isn’t reached here. Game Freak’s origin as a portable game developer is very clear, with Sword and Shield awash with its fair share of teething problems. 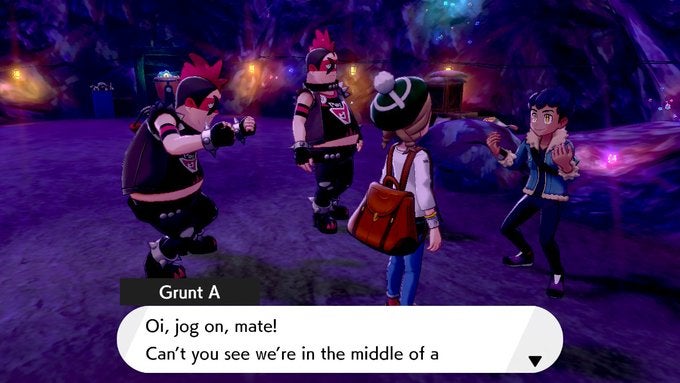 Even with a handful of graphical quirks, Galar is a beautiful addition to the Pokemon universe with every corner filled with British cultural references and cutesy colloquialisms that poke fun at the nation. Your room has a ‘telly’ while you’ll stumble upon ‘coppers’ on your travels eager to do battle. Even the trains are delayed in the opening hours, painting an eerily accurate picture of everyday life.

Starting in an adorable little town inspired by Scotland, travels will eventually take you to gargantuan castles pulled straight from a Welsh fairytale or a boulevard deliberately aping Piccadilly Circus. This isn’t the first time Game Freak has recreated real-life locations in Pokemon, and certainly won’t be the last, but seeing them envisioned with such vivid detail never gets old. So, it’s doubly unfortunate that many of the building interiors you visit feel like weak copy-and-paste jobs of the same room. Aside from tiny snippets of dialogue and the occasional item, there’s rarely a good reason to explore every nook and cranny of each location.

Given how often Sword and Shield enjoys holding your hand through irksome tutorials, it’s best to push on until you’re given more control over everything after the first handful of gym encounters. This is a game designed for children and adults alike, so the hand-holding makes sense to a degree, but cripples the pacing in a way that makes certain aspects a slog. 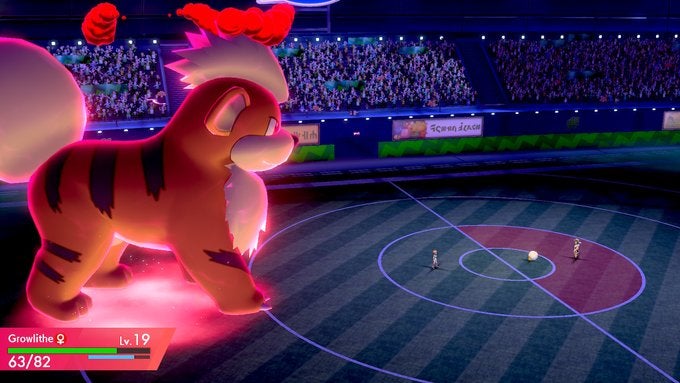 Gym battles are epic affairs akin to football matches – complete with chants, music and a real sense of passion

The battle system in Pokemon Sword and Shield hasn’t changed, which I definitely think is for the best. It’s the tried-and-true turn-based affair we’ve enjoyed for decades, refined with additional animations and menu alterations that simply make it easier to digest. Actions such as throwing PokeBalls and using items are now hotkeyed, saving you from digging into the bag to search for the same thing again and again during the same encounter.

Aside from small improvements it’s business as usual. Victory is easily achieved by countering your opponent’s Pokemon type or carefully juggling the use of moves and items to ensure your team never suffers from an unpredictable fatality. The context in which you participate in combat throughout Sword and Shield is what makes it so compelling. The biggest change comes in the form of Wild Areas – vast, open spaces where you can participate in Raid Battles and capture Pokemon far beyond your current level requirements.

Raid Battles follow you and a handful of fellow trainers as you take on an incredibly powerful ‘Dynamax’ Pokemon, which essentially means they’ve grown to gargantuan size and require more than a single individual to take them down. One player can Dynamax their own Pokemon to even the odds, working alongside their team by throwing out a blistering wave of attacks. Communication is key here, so the distinct lack of it can make Raid Battles outside of a local setting difficult to parse.

Catching a rare Pokemon at the end of Raids is more than worth it, though. My biggest gripe is the underutilisation of Dynamax throughout Sword and Shield. They emerge in Raid Battles and Gym encounters, occasions that are frequent enough that the mechanic feels thoroughly fleshed out, but restrictive in a way that Mega-Evolutions in previous games simply weren’t. I can’t help but feel some of these ideas aren’t being used to their full potential. 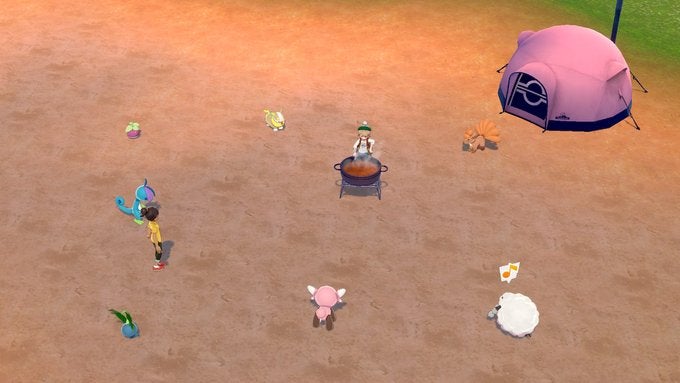 Pokemon Camps let you play with your party, make curry and relax after a long trip on the open road

While exploring Galar you can set up Pokemon Camps – a makeshift base of operations where Pokemon are free to explore and befriend one another while you’re busy cooking up a delicious dish for everyone to feast on. This is where the Currydex comes in – an encyclopaedia that chronicles your cullinary efforts. It’s a wonderfully silly addition adorned with adorable animations each time you and a partner sit down to eat – happiness or scorn depicted on their faces depending on the quality of each dish. Cooking rewards you with experience and a few other bonuses, too.

Should you buy Pokemon Sword and Shield?

Pokemon Sword and Shield is an excellent entry in Game Freak’s iconic franchise, pushing the series forward in some exciting ways while never forgetting the roots that made it so loved in the first place. While it underwhelms in its visuals and underbaked use of new ideas, the act of exploring Galar and catching creatures remains as delightfully compelling as it’s ever been – and that’s what really matters in the end.