First coming into existence as a Gamecube launch title, Luigi’s Mansion has since established itself as a spookily stylish subseries in the Mushroom Kingdom. Propelled by Luigi’s goofy charm and dozens of ghouls, now a third instalment is making its way to Nintendo Switch.

Set to release later in 2019 amongst the likes of Astral Chain and The Legend of Zelda: Link’s Awakening, this haunted adventure is shaping up to be a real treat. So, Trusted Reviews has compiled everything you need to know about Luigi’s Mansion 3 including all the latest news, release date, gameplay and our hands-on preview.

Luigi’s Mansion 3 release date – when is it coming out?

It’s coming to Nintendo Switch in 2019. No specific release date or window was announced.

I’m still not over the fact that Luigi’s Mansion 3 is not set in the abode its namesake would suggest, but it instead takes us to a towering hotel filled with ghosts and ghouls. This is a scandalous lie that could sink politicians, but since it’s everyone’s favourite plumber doing the dirty, we’ll let him off with a slap on the wrist.

Acting as the anxious sibling’s first solo foray on Nintendo Switch, Luigi’s Mansion 3 brings with it an ample amount of ambition. The level-based structure of Dark Moon returns as you work through multiple hotel floors, each of which have different themes, enemies and stories to tell. The setting is immediately striking, and one of the best looking I’ve seen on Switch.

During my hands-on time with the game, I explored a level themed around a medieval arena, a battleground in the centre acting as my objective, while clumsily navigating ramparts filled with supernatural threats. Luckily, Luigi ain’t afraid of no ghost, and can suck them up for good with the Poltergust 3000. 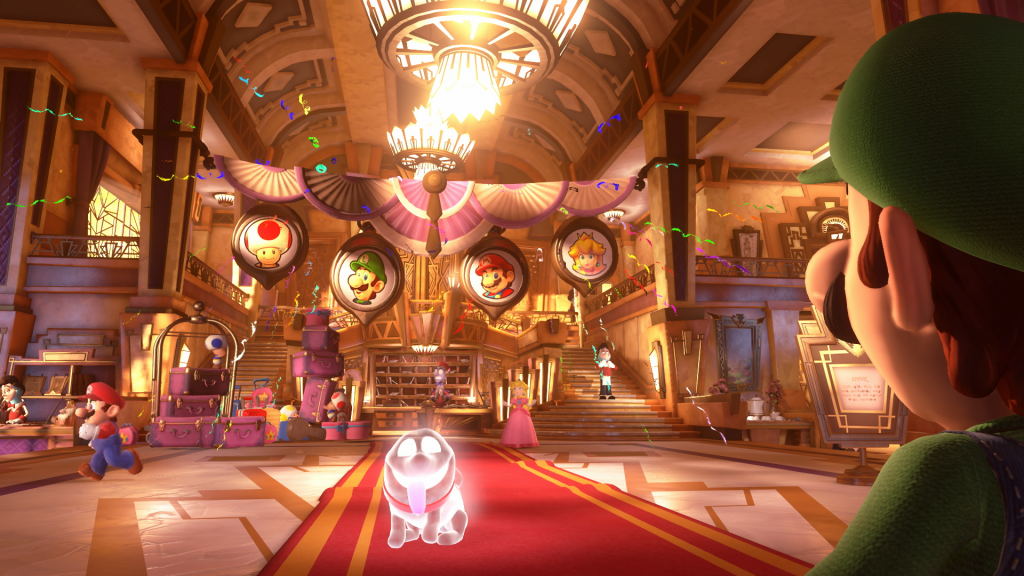 Capable of sucking up the majority of foes you’ll come across, the Poltergust 3000 is a technological marvel in a number of ways, and perhaps takes a few liberties from Ghostbusters. However, before sucking can begin, Luigi must freeze enemies with a well-timed flash of his flashlight. This adds a lovely sense of rhythm to proceedings, with Luigi really coming alive in boss battles as adversaries charge towards you. At times like this, it’s all or nothing.

Once vulnerable, with the touch of a button and timely positioning of the thumb-stick, I was conquering the afterlife in no time. It’s very similar to past games, although a new mechanic helps to make things feel fresh. Once in my clutches, I could repeatedly slam ghosts against the floor around me for some real punishment.

Not only does this deal extra damage, it can also hurt ghosts I’m yet to interact with and destroys parts of the environment to uncover secrets or even means of progression. It’s a minuscule evolution in the grand scheme of things, but almost certainly made me feel more involved with each conflict. Each room I entered is a puzzle to be solved, and I didn’t want to leave without every stone unturned.

I’m hoping there will be ways to upgrade and customise my virtual vacuum cleaner in the full experience, mixing up its range of colours or decorating it with stickers filled with beloved Nintendo Easter eggs. Luigi has way more personality than Mario, and leaning into that would only make this spooky escapade all the more enjoyable. 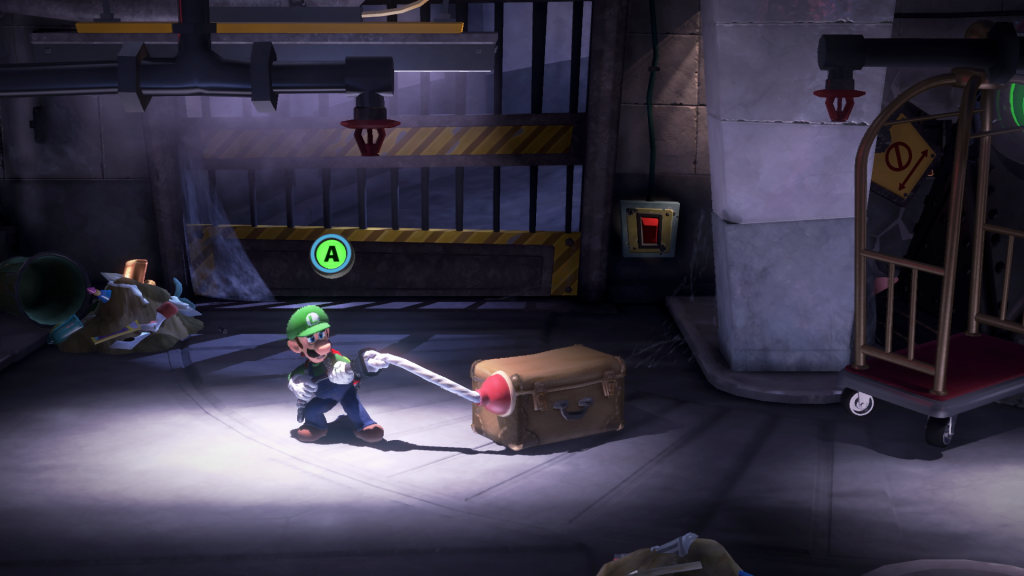 Combat isn’t the only avenue where Luigi’s Mansions has received a few extra bells and whistles. Puzzle design is equally fleshed out, thanks to the addition of the one and only Gooigi. This essentially turns Luigi into Slimer from Ghostbusters, forcing a gooey doppleganger to emerge from the ghost hunter’s shadow.

It’s a little unsettling at first, with Luigi’s voice distorted by his jelly-esque innards as he trips over obstacles and moans in fear at all the otherworldly creatures surrounding him. But once I came across my first major puzzle as Gooigi, it all fell perfectly into place. Luigi’s Mansion 3 is filled with precarious traps, many of which can only be conquered by our slimy fellow.

One such obstacle saw me cornered by a field of spikes, the door that would grant me escape located directly behind them. Once transformed into Gooigi, I could navigate through, unharmed, and press a switch to allow Luigi through. A similar task featuring an elevator was also a treat to solve, moving up and down before finally nailing a sweet spot.

Be careful with water through, as being splashed or making any sort of contact with the liquid will reduce Gooigi to nothing. I only saw this weakness displayed on a single occasion during the demo, but I imagine it will be far more pronounced in the full game. 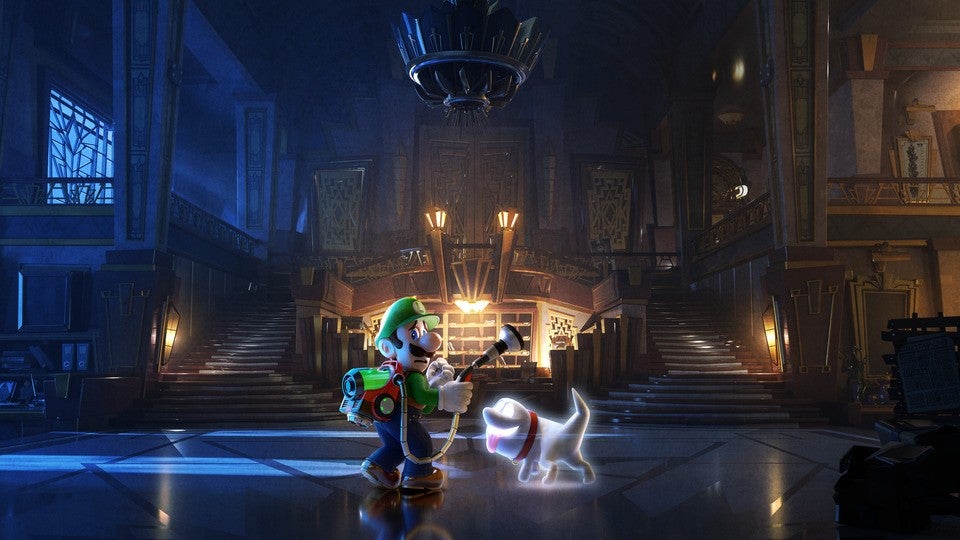 After growing familiar with Gooigi, I stepped into the colosseum that I first encountered when the demo began, except this time I’m going toe-to-toe with a stubborn King riding on ethereal horseback. This battle followed the conventions that I, and millions of others, have come to expect from Mario titles – with the big bad repeating patterns that are telegraphed in such a way that you’ll know when to strike.

Luigi’s vacuum cleaner can also fire a rope plunger, which handily stuck to the King’s shield, pulling it away and leaving him vulnerable to my sucking prowess. After repeating this four times amidst an arena filled with increasingly precarious obstacles, he’s down for the count. Despite its simplicity, the fight was a rewarding joy, my happiness emphasised further as a mixture of money, jewels and other pleasures spewed from the fallen ghost.

If the rest of the game matches up to this utterly charming demo, Luigi’s Mansion 3 will be another welcome jewel in Nintendo’s crown of Switch exclusives.

Luigi’s Mansion 3 trailer – how does it look?

You can view the latest trailer from Nintendo’s E3 2019 Direct below:

Are you ready to be spooked in Luigi’s Mansion 3? Let us know on Facebook and Twitter @trustedreviews.