The first thing you need to know about Super Mario Maker on the 3DS is that, currently, you can’t share or access created levels over the Internet. The reason I bring this up straight away is because you may think that the major selling point of this whole gaming concept being missing makes this an utter waste of cash. But that just isn’t the case.

While Nintendo has undoubtedly stripped back certain elements for the handheld version, what’s here is still utterly addictive and fun. Taking advantage of the cliché “less is more”, Mario Maker on 3DS only ever offers you three routes of entertainment. You’re either playing levels made by Nintendo, playing levels made by others – a significant number have been taken from the Wii U version and dropped in here – or trying to see what masterpiece you yourself can create.

There have obviously been efforts made to ensure there’s a sense of progression – the 100 Mario Challenge, for example, gives you 100 lives and then picks random user-generated levels to try to best. But to pretend this is anything other than a way to experience a more insane side of the most famous video game in the world would be silly. It’s just not true.

The point, though, is that this is enough. The tools at your disposal are so simple that it’s always a pleasant surprise when you realise how much you can do with them. Aside from having to stick within the Mario template, there are no real rules or restrictions – if you want to make 20-feet-tall koopa troopas that just dominate a landscape, you absolutely can. You’ll also have to prove your level can be completed – you can’t be *that guy* trying to troll the game’s mechanics – but otherwise, go crazy.

On top of this, toying around with what’s possible is a great way to realise that there are tricks you’d imagine Nintendo hasn’t even thought about. The systems are there to be experimented with. The more you experiment, the more you’re going to get out of it. This isn’t instantly apparent either, but the more you progress, the more inventory you’re given. There’s an argument to be made that this should all just be available from the start, but it’s not like it’s a burden to unlock it. You just have to go and have a play for a while.

Related: What you need to know about the Nintendo Switch 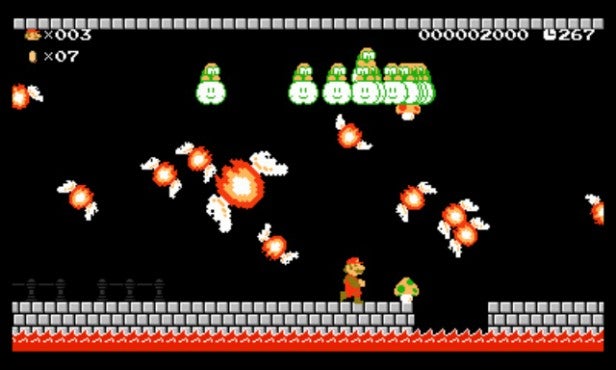 Even if you’re not into the creation side of things, however, there’s still enough here to justify Super Mario Maker’s existence. A truckload of levels have been thrown in, ranging from the very tame to the frankly infuriating. How you’re meant to get through some is a mystery, but this is where Mario Maker gets its longevity. No matter how difficult things get, there’s a constant nagging that you have to best it – or, failing that, use the very welcome skip option.

That this has all been structured so it follows a more standard Mario pattern was a smart decision by Nintendo, as it brings a sense that you’re progressing as opposed to just playing random levels. At its worst this is just a proper nuts entry in the franchise, where 1,000 goombas can rain down from the sky with no warning whatsoever.

With all that said, it’s only fair to address the elephant in the room more directly…

At the moment, yes, there’s enough here to make Mario Maker 3DS a success, but the ability to share levels on a wider scale at some point is imperative. There’s hope, though, given this is only version 1.0.1 – it says so, right there in the corner of the screen.

Level sharing is what’s made, and continues to make, the Wii U version so fascinating, and without it there’s a very finite shelf life for the handheld edition. There’s only so long you can conjure up mini works of art before needing to offer them up to the world. 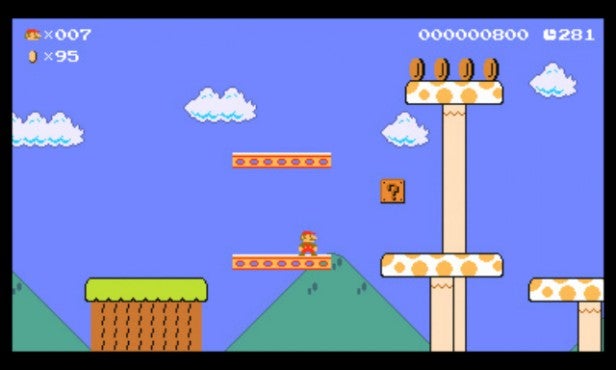 This can be done, however, via local sharing – and if you happen to walk past someone with Street Pass enabled, you’ll have a nice surprise waiting for you when you return to your console – but that’s just not the same. Why take over a town when you can take over a city? And why only share with your friends when a global audience deserves to see the time and effort you’ve put in?

Even so, Super Mario Maker is an excellent fit for a portable device, especially given how apt the idea is for pick-up-and-play gaming. You only ever need 10 minutes to get through a few levels, and for that it deserves a lot of credit.

There’s yet more hope, as it seems very likely Nintendo will continue to evolve the foundations, and if that’s the case then the future looks very bright indeed. The potential is there for so much more. Mario Maker is the game that keeps on giving – the 3DS version just has to be allowed to do so.

Super Mario Maker 3DS takes everything that worked on the Wii U and replicates it for a handheld experience. It’s a shame that sharing levels via the Internet isn’t yet possible – but this game’s a joy all the same.

You can read Trusted’s original Wii U Mario Maker review, by Stuart Andrews, on the next page.