Star Wars: Squadrons is the dogfighting experience in the iconic sci-fi universe we've been waiting for, and the game is supremely passionate about making this something that genre veterans and hesitant newcomers can enjoy with minimal obstacles.

Electronic Arts hasn’t had the best track record with the Star Wars license, although recent years have seen the franchise experience a resurgence of sorts with Respawn Entertainment’s Jedi: Fallen Order and the long-awaited comeback of Battlefront 2, both of which were (largely) well received by die-hard fans.

Now, the publisher is pushing the boat out (or perhaps spaceship is more fitting), and producing an experience that we’ve been waiting years for. Star Wars: Squadrons is a dedicated dogfighter that places a great emphasis on all the best vessels, conflicts and characters from the iconic series while painting them in an entirely new light.

As Fallen Order has proven, Star Wars videogames are at their best when they aren’t lazily relying on the films that inspired them, choosing instead to carve their own paths forward with fascinating new characters and stories. Squadrons does exactly that, even if all of its elements aren’t executed perfectly. But for fans of the genre, this is positively essential. 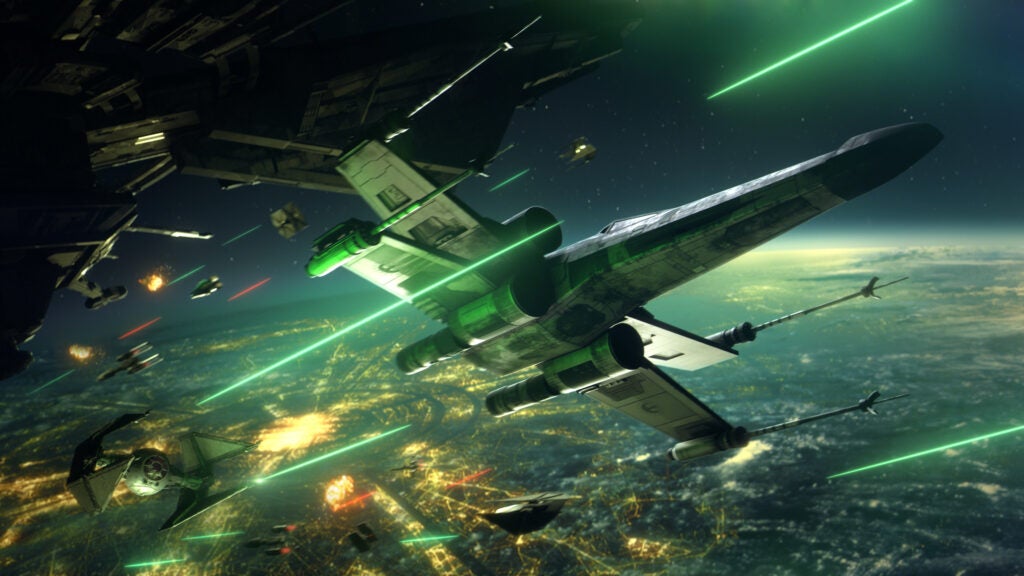 Taking place after the Battle of Endor, Star Wars: Squadrons follows a duo of pilots from the New Republic’s Vanguard Squadron and the Galactic Empire’s Titan Squadron, with the stories of both pilots intertwining throughout the solo campaign. Together, they become entangled with a new venture known as Project Starhawk, with each side vying for either its destruction or completion.

It’s a compelling yarn, and witnessing the conflict from both sides fills the quandary with memorable characters and moral dilemmas. Before jumping into your respective spaceship, you’ll be free to explore a hub area by speaking to fellow comrades, although you’re oftentimes a passive participant being fed exposition instead of a valiant hero wanting to step up and save the galaxy.

This can lead to some story moments feeling strangely underbaked. While the voice acting and dialogue are strong enough to carry much of the action, don’t expect anything worthy of standing alongside the classic films here. That being said, the fact that EA Motive has made any effort to craft new personalities with such a restrictive property is more than welcome, even if they don’t always get enough room to shine. 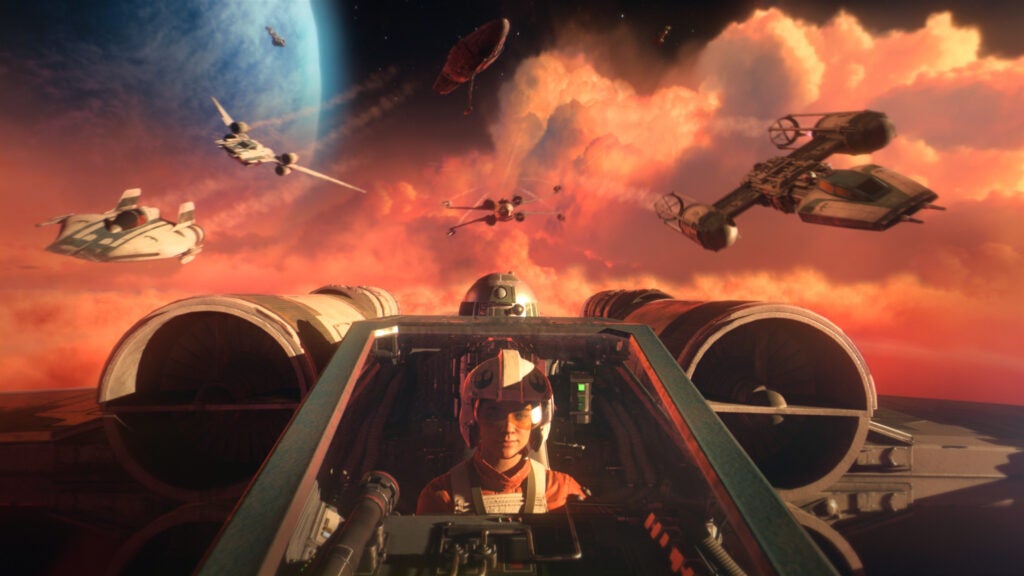 But once you’re inside the cockpit of an X-Wing, many of your complaints with the narrative float away into nothing. This immediately took me back to flying around the galaxy in Jedi Starfighter back on the PS2, but with far more depth, visual beauty and nuance. If you’re especially ancient and grew up with X-Wing and TIE Fighter on MS-DOS, Squadrons will feel like downright witchcraft in comparison.

The wonder of soaring through space and firing missiles at screeching TIE fighters is wonderfully realised here with a magnificent sense of impact and speed, and it’s been designed with both veterans of the genre and newcomers in mind. The degree of control you have over your spacecraft can range from a few button presses to a fully-fledged HOTAS kit, with the latter transporting you to another world if you happen to also be playing in virtual reality.

As for the accuracy of controls, they will be largely familiar to anyone who has touched a game in the genre before. As you veer left and right or bank up and down you’ll need to take into account your vehicle’s weight before locking onto your enemy and unleashing a barrage of missiles. The general flow of movement and combat takes some adjustment, but once you’ve settled into a groove it feels excellent, although it’s still very easy to become disorientated in the midst of a chaotic dogfight. 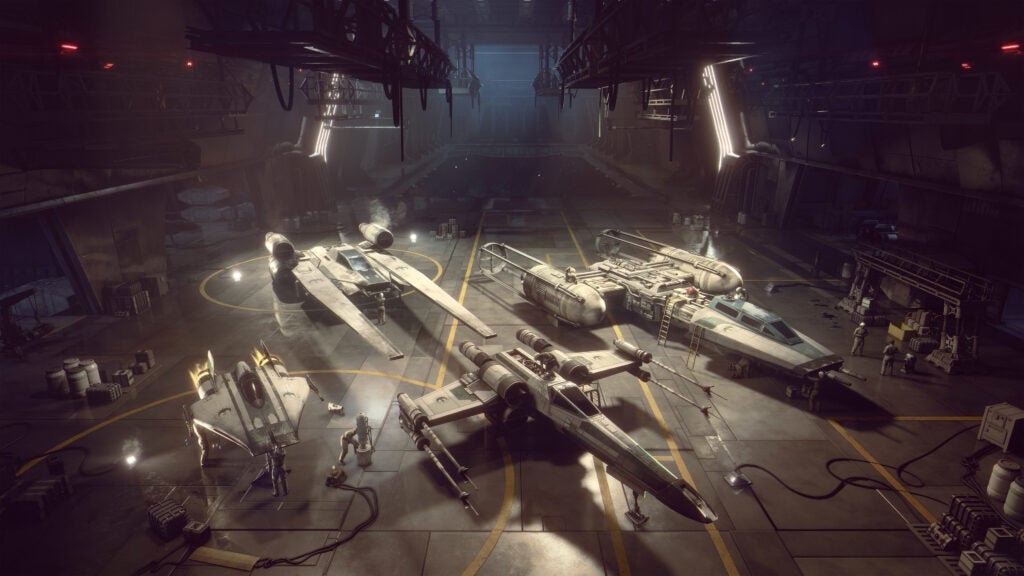 Dogfighting isn’t simple a ballet of movement and weapons, you’ll also need to dynamically manage the power output of your vessel. You can reroute resources to provide additional power to your weapons, shields or thrusters at any given moment whenever you need to bolster the capabilities of your arsenal. It’s a delicate balancing act, and one that is essential once you’ve turned all the assists off and want to master the art of being an ace pilot.

You could honestly survive on easier difficulties without touching these modifiers at all, but being able to switch things around adds a welcome layer of strategy to the power fantasy, even if it’s a fairly barebones extension of the dogfighting experience. Such techniques become more essential in online multiplayer, as the patterns of real-life opponents are far more challenging to predict. Speaking of multiplayer, it has a robust selection of modes alongside more than enough progression options.

One of the first things you’re tasked with in Star Wars: Squadrons is to create your own avatar, which will translate to both the solo campaign and online multiplayer. You’ll unlock a number of cosmetics with each level, although given the first-person perspective, you won’t spend a lot of time staring at them. With that said, knowing you’re building your pilot’s reputation after each 5v5 dogfight brings a welcome sense of satisfaction. 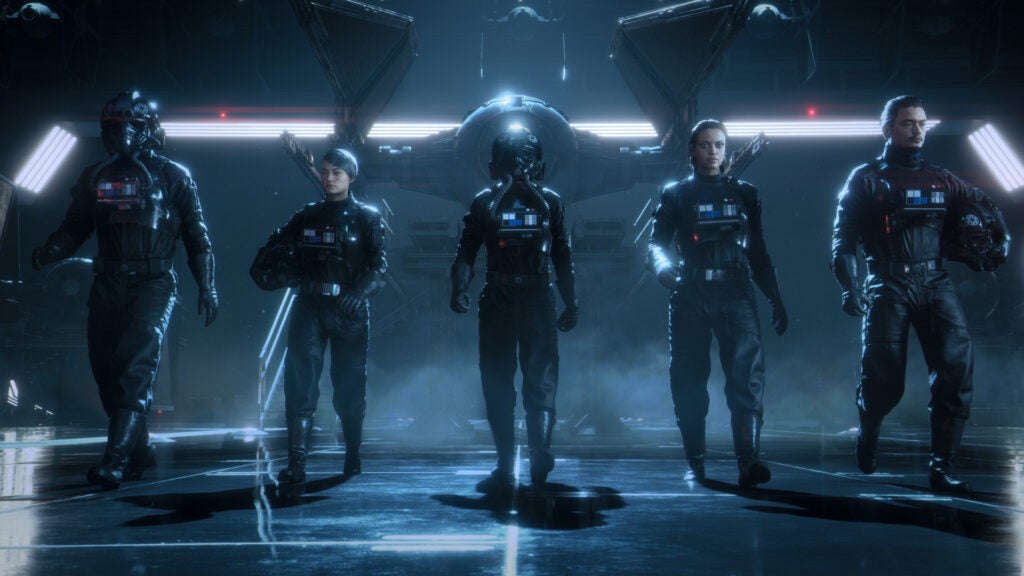 In terms of modes, online multiplayer is split into the aforementioned 5v5 Dogfights and Fleet Battles. The latter are larger, multi-stage affairs which focus on opposing teams completing specific objectives while trying desperately to wipe out their opponents. Carrying out strategic bombing runs on hostile frontiers or taking out the targeting modules on towering Star Destroyers delivers an undeniable thrill, but sometimes the pace of Fleet Battles can be feel very uneven, and debatably boring at times.

But these quiet moments do allow for contemplative moments of strategy, and if you manage to complete all of your objectives, you’ll be rewarded with the bombastic destruction of an enemy flagship. It looks spectacular in motion, and being caught up in your own individual battles as this wider layer of chaos unfolds makes you feel like a small part of an uncompromising galactic conflict. As excellent as these two modes are, the fact they they’re the only two available at launch might turn off more casual players.

Granted, you can only do so much with the premise of dogfighting when it comes to creating different spins on multiplayer, and those with a love for precision space combat likely won’t have many complaints, especially with how Squadrons handles progression. Climb the ranks and you’ll earn Requisition Points to spend on ship components and other cosmetics, making it feel like you’re a pilot gradually piecing together their own unstoppable vessel. Beginning as a fledgling Maverick and slowly evolving into a Galactic Ace will definitely have its charms if EA Motive doesn’t slack on future support. 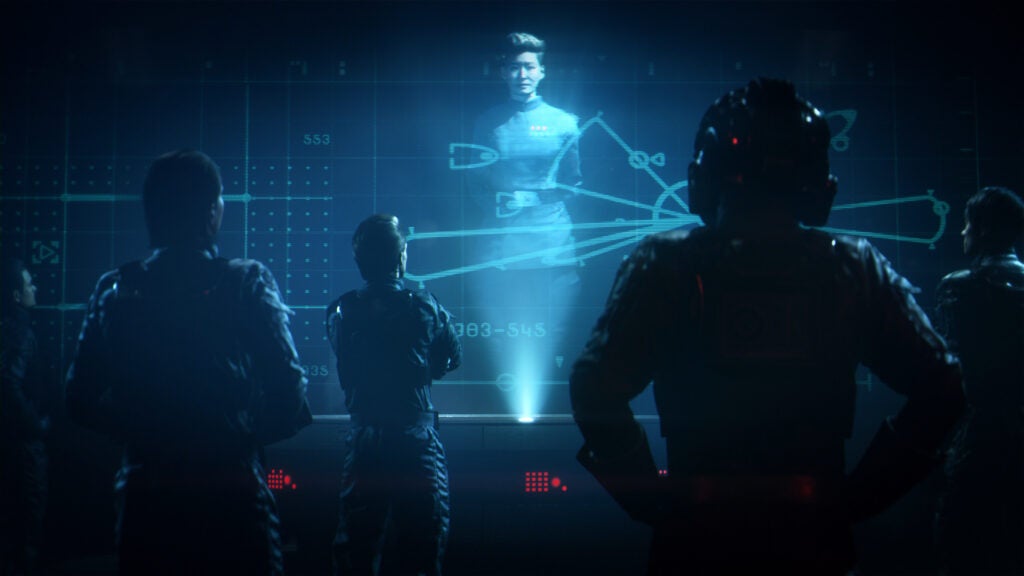 One last thing I want to touch on is virtual reality in Star Wars: Squadrons. The entire game has been created with both traditional play and VR in mind, meaning you can experience every second with a headset on your face. It’s brilliantly executed, and being able to reach out and touch the endless knobs and dials of each cockpit brings a stunning sense of authenticity to every passing moment.

Those who are inclined to motion sickness might struggle given the fast and unpredictable nature of Squadrons, but if you have a headset and the specs to support it, this is the best way to experience a game like this. I played with a PS4 controller in virtual reality and the controls are simple enough that I never found myself struggling or lifting the headset to constantly break the sense of immersion. It’s rare to see a publisher like Electronic Arts dedicate itself to virtual reality like this, and hopefully it’s a sign of things to come.

Star Wars: Squadrons is the dogfighting experience in the iconic sci-fi universe we’ve been waiting for, and is supremely passionate about making this something that genre veterans and hesitant newcomers can enjoy with minimal obstacles.

The lack of multiplayer modes and underwhelming narrative elements bring the package down somewhat, but when you’re in the cockpit and blasting away at the Galactic Empire, small quibbles like this quickly melt away into the background.