Star Wars Jedi: Fallen Order is far from a masterpiece, but to say it could’ve been one without some of its basic flaws may not be so far fetched. As it is, you can look past the tame story and inconvenient bugs and instead revelling in joyous combat, awe-inducing cinematics and fluid platforming.

You arrive atop a tree, a big yellow beast in a uniform crops up and rants at you. You flee – tumbling down a slippery jungle. You bounce, wall run and scarper until… a large bird Pokémon* crashes out of the sky to save the day. Star Wars Jedi: Fallen Order has so many wonderful moments like this, and despite its flaws, you’ll still have an absolute forcing blast. (*It isn’t really a Pokémon and, no, it isn’t a spoiler.)

Star Wars Jedi: Fallen Order is a melting pot of genres and mechanics pioneered by other games – some of which are born out of the previous exploits of this game’s developer – Respawn Entertainment.

This latest foray into Disney’s universe brings mixed results when it comes to the titles it draws from but – across the course of the game – manages to merge them into an experience all of its own.

The real flaws of Star Wars Jedi: Fallen Order comes in its performance and pacing. Fallen Order may leave you cold in the beginning – frustrated by the magically appearing enemies and inviting introductory levels. However, stick with it and you’ll be rewarded with gameplay and cinematic moments that combine to create the best Jedi simulator ever made. 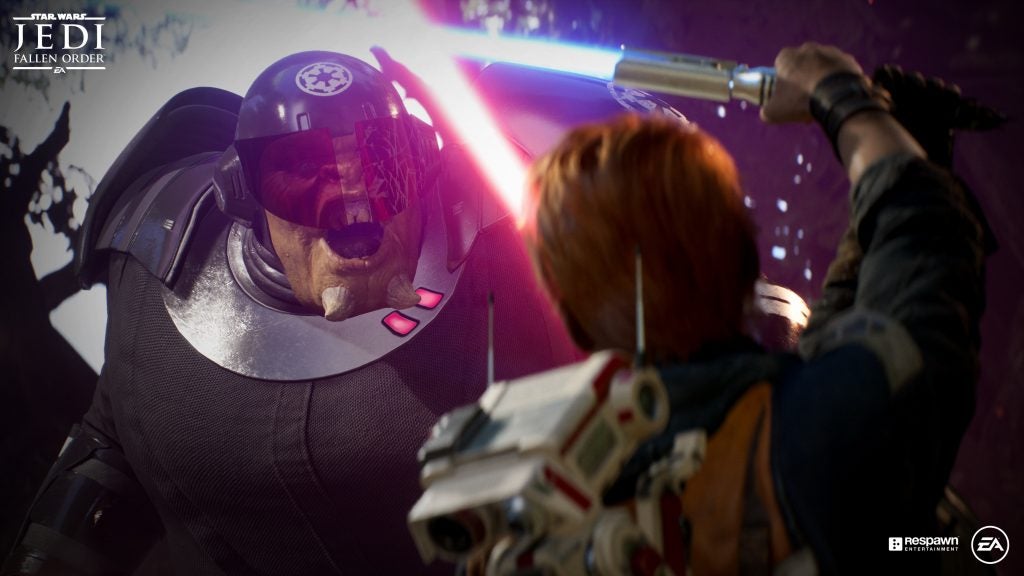 The main crux of Fallen Order is its combat – there’s plenty of Respawn-patented traversal, but we’ll get to that later. On a scale of complexity and flow, the combat falls somewhere in between Assassin’s Creed Odyssey and Sekiro: Shadows Die Twice.

Lightsaber-wielding definitely takes some getting used to and – if you approach Fallen Order like either of the aforementioned games – you could find yourself flat on your back more often than not. Yet, this isn’t a hard and fast rule – with some enemies charging in is your best bet, while others require a methodical parry and dodge approach.

The first hurdle you’ll encounter with the lightsaber is timing – it’s weird. The animations of your blocking movements are slow when compared to similar titles and you’ll often find yourself feeling like your perfectly timed parry was ineffective.

Fallen Order asks you to consider the extra split second it takes you to raise your lightsaber for a block – it’s different but you learn to adapt as your trek amongst the stars goes on. Similar to Sekiro: Shadows Die Twice, you can’t spam parry either. If you furiously hammer said button, the enemy will take no notice of your attempts at self-defence.

While parrying is the best way to do some serious damage, Fallen Order is a game where you should embrace dodging and rolling. Enemies often carry out long attack sequences and if you can shimmy out of the way you can land several devastating blows. 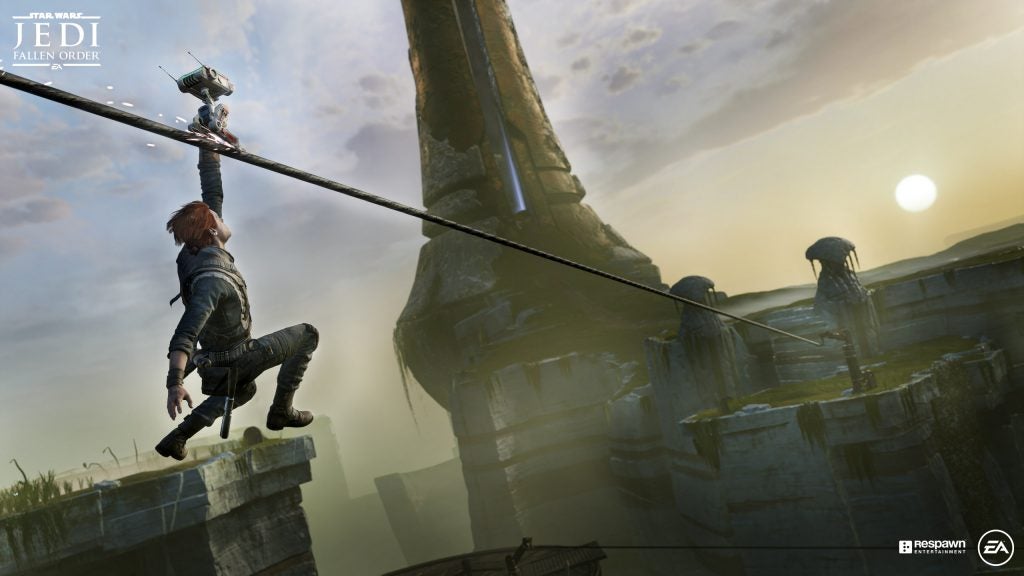 Fallen Order offers a decent range of enemies for you to dispatch with your newfound combat skills. From more advanced staff-wielding officers of The Empire to blundering monsters who pound and slam with little care for their surroundings.

The difference in adversaries encourages you to adapt for maximum effectiveness – this plays out the most when you are tasked with a mish-mash of enemy types and, while it can be exhilarating to get it right, it also introduces one of the adventure’s bigger flaws.

Early on, you will find yourself surrounded by several enemies and your instinct will be to try to pull one away to make it more of a fair fight. Unfortunately, this doesn’t work well as enemies easily catch up and can attack simultaneously. The issue is more pronounced in tighter areas when you can feel at a loss as to what to do and the camera is rarely your friend.

All is not lost however and the game introduces some mechanics relatively early on that allow you to better combat these situations (You can also do a tad more exploration to level up sooner). The early problems inhibit your learning of the base combat style and so introducing these mechanics earlier – even in a weakened form – would be a welcome change.

Despite these flaws, the lightsaber battles  are a triumph. They really come into their own in some of the harder boss fights when you’ll dodge, parry and use your powers at a blistering pace with some exhilarating visual results. 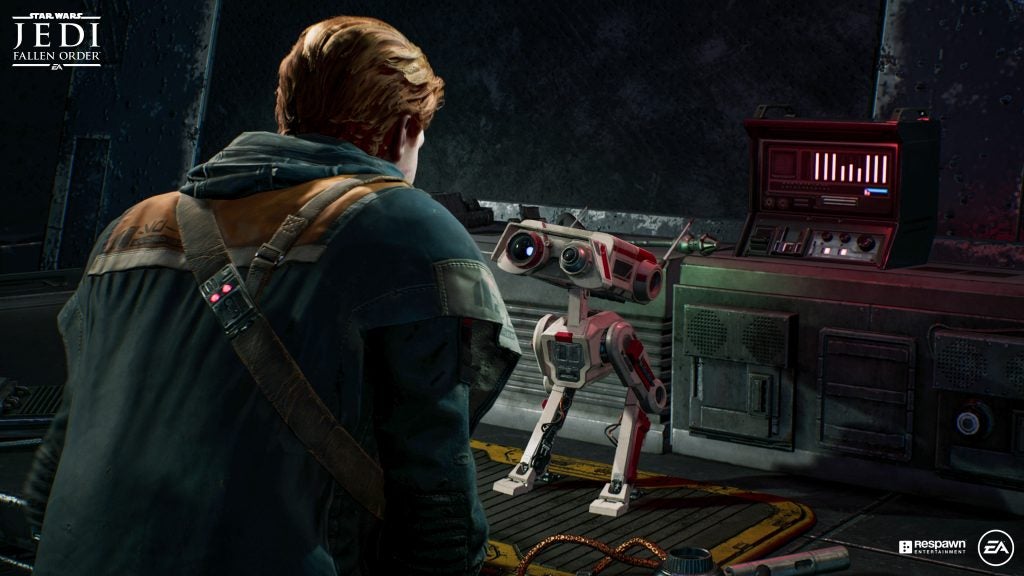 While a lot of the excitement of Star War Jedi: Fallen Order comes from duelling and defeating a plethora of iconic foes, the platforming is another pivotal addition – even if it isn’t quite top-tier.

As you traverse the worlds in Fallen Order, you’ll be introduced to a fairly simplistic platforming style akin to an Uncharted or a Tomb Raider – with some puzzling along the way to boot. There is an added layer of complexity with a requirement to grab onto walls and vines as you first ascend a wall, and this can lead to some unwelcome deaths.

The basic platforming is mostly some fun downtime in between fighting but it shines when Respawn looks to its own past – in the form of Titanfall 2 – for inspiration. The sci-fi shooter invited you to charge through platforming levels with a faltering foothold or rabid enemy at your back.

This frantic pace is alive and well in some of Fallen Order’s best moments. You’ll wall run, vine swing and skid at heart-racing speed and – when you pull it off – you’ll feel like you’ve been on a galvanising rollercoaster ride.

While it does allow you to explore some stunning settings almost at will, the narrative is linear. As such, the bar is set high for what people will expect from the story and its characters, and Fallen Order doesn’t live up to these expectations. 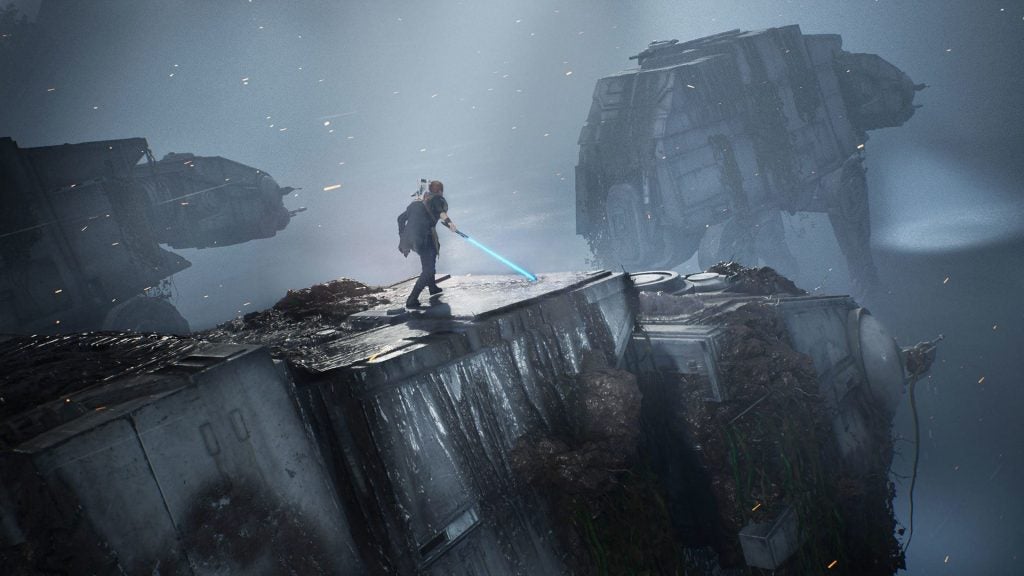 The story focuses on one overarching mission with sprinkles of character development in between. The wider tale isn’t something to hate but it is ultimately quite pedestrian and it isn’t aided by plainer than plain protagonist Cal Kestis.

While Cal is the driving force of the plot thanks to his powers, much of the interesting characterisation and story moments come courtesy of his companions and their history. The same goes for the range of antagonists in the game – they provide the most interesting dialogue and some Star Wars-related philosophical points to ponder.

Throughout Star Wars Jedi: Fallen Order, the game feels like a honed experience – from some exciting cinematic traversal sequences to the interesting take on parry-and-dodge combat. Unfortunately, this refinement goes out of the window when it comes to some startling bugs and performance issues.

It’s littered with problems where you’ll intermittently witness enemies popping in, sporadically dying for no reason or eternally falling on the spot, some of which was unintentionally hilarious to watch. 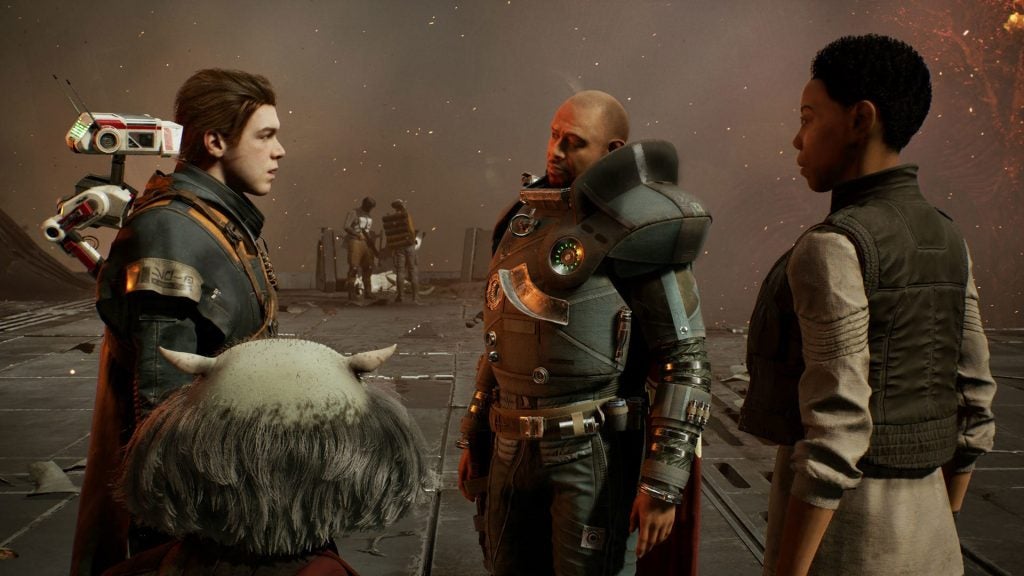 Cal Kestis isn’t safe from the bugs either – occasionally becoming stuck inside a wall while scaling it or being able to jump onto areas where you clearly aren’t meant to go.

Thankfully, most of these bugs aren’t game-breaking. I experienced one crash during my whole playthrough – you’ll also have to sit through some substantial loading screens (even on a console like the PS4 Pro).

Its overall sheen is also let down by a weirdly mixed bag of asset quality. Cal Kestis’ character model looks impressive most of the time while some of his companions can look far more cartoony.

However, it isn’t a hard and fast rule that Cal is the only refined model, as some folks you meet throughout Fallen Order also look extremely detailed.

The graphical quality is extended to many settings you visit. You’ll explore some Star Wars locales that you will have never seen before and some landscapes are truly stunning – Respawn has knocked it out of the park in that respect.

Star Wars Jedi: Fallen Order is far from a masterpiece, but to say it could’ve been one without some of its basic flaws may not be so far fetched. As it is, you can look past the tame story and inconvenient bugs instead revelling in joyous combat, awe-inducing cinematics and fluid platforming.