Not surprisingly, the Xperia Z4 Tablet runs the latest version of Google’s mobile operating system, Android 5.0.2 Lollipop. This means you’re treated to the new Material design and all of the layout tweaks that come with it.

Thankfully, Sony has refrained from messing around with the software too much, simply bundling its own themes and wallpapers, as well as a handful of Xperia-branded apps.

Xperia Lounge offers special promotions directly to customers. Xperia Link, meanwhile, lets you quickly connect to the internet via a connection to your smartphone – as long as it’s also an Xperia model – and Xperia Care acts as a support hub.

Something that will appeal to PS4 owners is Remote Play, which allows you to use the Z4 Tablet as a second screen for your games console. It’s particularly handy if you live in a busy household where the TV is in constant demand, and should ensure at least one less scrap over the TV each evening. What’s more, you can use the PlayStation DualShock 4 controller with the Z4 Tablet straight out of the box.

Sony also offers some apps, which are handy if you’re a keen multi-tasker. You can open as many as 10 applications in separate windows on one screen, although we found that any more than three can look messy.

You can use Chrome, Gmail, the calendar, calculator and native music player in this view, and move and resize each window to suit your needs. 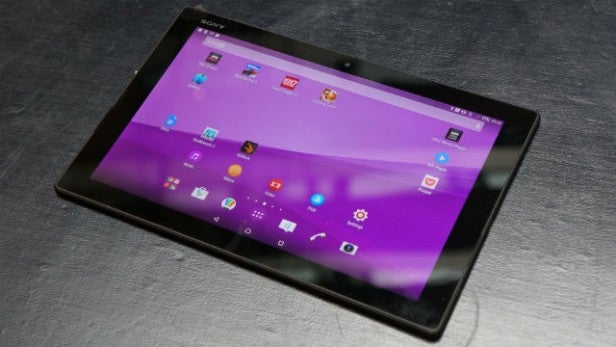 Screen quality and features mean little if performance isn’t up to scratch, but we’re pleased to report that Sony has got things right in this department.

Admittedly, alarm bells began to ring when we discovered that the Z4 Tablet is powered by the much-maligned Snapdragon 810 processor. But we didn’t experience any of the overheating issues that have been reported in the HTC One M9 and LG G Flex 2.

That said, the Xperia’s rear warms up even during light use, such as browsing the web. Still, it never became worryingly hot during testing, even while gaming.

The 64-bit octa-core processor clocked at 2GHz and 3GB of RAM combine to excellent effect, making the Xperia Z4 Tablet very powerful indeed. This is reflected by our benchmark results.

However, benchmarks aren’t everything. Fortunately, the Xperia’s performance is generally excellent.  It blitzes through 3D games, including Real Racing 3, Asphalt 8 and Dead Trigger 2, delivering a flawless experience. Similarly, movies and videos play smoothly, without a hint of lag.

On occasion, we did find that sound and videos sometimes stuttered when rotating the screen, and we’re not sure why. However, it seems to happen on an irregular basis, and is so fleeting that few users will actually be bothered by it. 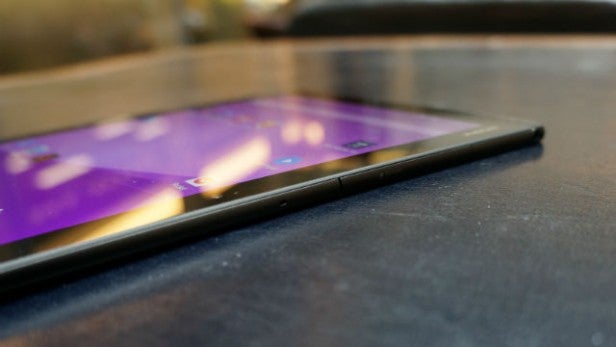 The micro-USB port sits in the centre of the right-hand edge, while the rest of the connections sit on the top edge. From left to right, there’s the headphone jack, the nanoSIM tray and the microSD card slot, which you can use to boost storage by up to 128GB. The SIM and microSD slots are covered by a long, rectangular flap to keep water out.