The Sony Cyber-Shot DSC-QX100 is a pretty new idea in the camera world. It’s a digital camera that connects to your phone, using its screen as the preview display that you’d normally find one the snapper’s back.

This is the higher-end model of the two Lens Camera models. Where the £400 QX100 has a 3x optical zoom, the £200 QX10 has a superzoom-style 10x zoom. However, it’s this shorter zoom model that’ll appeal to camera enthusiasts as it has the same fairly large sensor as the excellent Sony RX100. 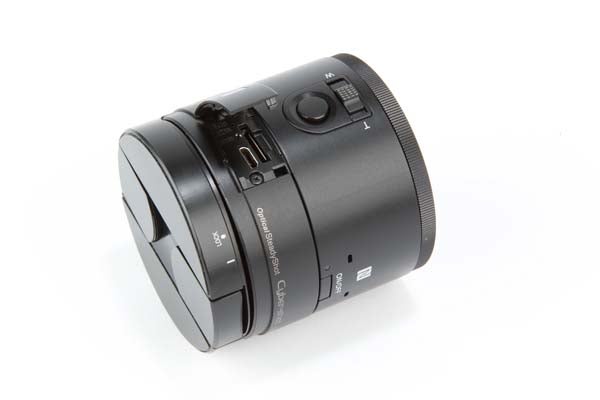 Fully-restracted the QX100 is fairly petite

The Sony QX100 looks like a camera lens missing a body. It hooks onto your mobile using a rubbery clamp that is designed to fit the majority of current phones.

However, Sony’s documentation says it maxes out at 75mm of clamp width, meaning super-giant phones like the Xperia Z Ultra may be a smidge too big. Also pretty important – you don’t need a Sony phone as the QX100 works with iPhones and most Androids. Windows Phones are out for now, though – the required PlayMemories app isn’t available on that platform. And BlackBerry 10? Don’t make us laugh. 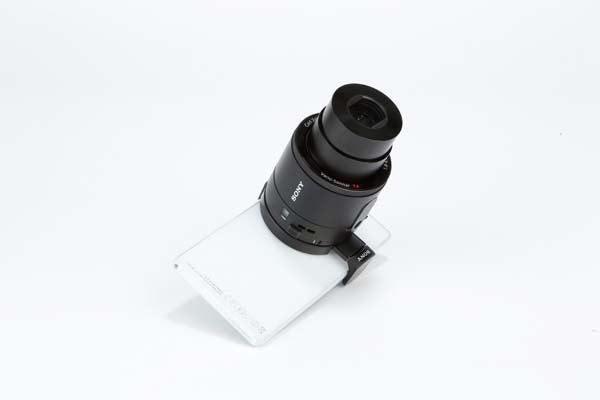 Your initial assumption might be that the Sony QX100 provides the lens and the sensor while the phone attached to it does all the processing work. However, just about everything is done by the Sony QX100.

It holds the storage – a microSD card – and it does the processing. You don’t actually need to connect the Sony QX100 to a phone to take pictures. But not doing so will make composition pretty tricky as you’ll have no direct indication of what you’re snapping. The only screen on the Sony QX100 is a tiny battery level indicator.

There’s also no physical connection between your phone and the lens camera, beyond the grip that does little more than secure the QX100. Instead of a wired connection, the two communicate over Wi-Fi Direct. 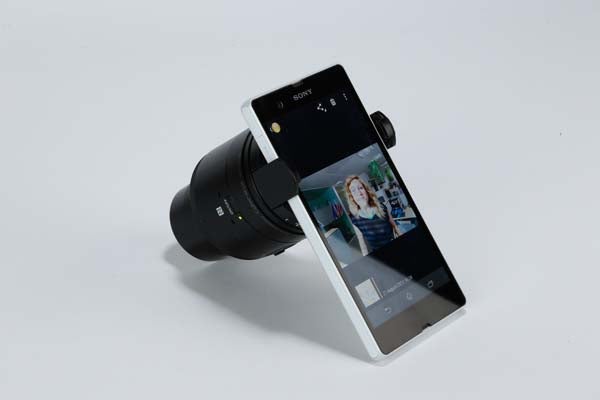 This is pretty much the only connection available in a phone that’s fast enough to do what’s required – transferring a ‘live stream’ of what the camera sees to the phone, and image previews of any shots taken. You can switch off the latter if that’s not needed, though. The connection between phone and camera seemed reliable during our time with the QX100, but there is a little bit of lag – predictable when streaming over Wi-Fi.

Despite being the price of a pretty high-end compact at £400, the Sony Lens Camera QX100 doesn’t not scream ‘premium build. It’s not all-metal, and as there’s no body to speak of, handling is pretty unusual.

There’s a zoom control slider on the barrel of the lens, alongside a little circular shutter button. And there’s also a manual control ring that can be used for focusing or zoom control. Using it solo does feel odd, ergonomically, but not necessarily that much stranger than something like the marginally less kooky Canon PowerShot N. 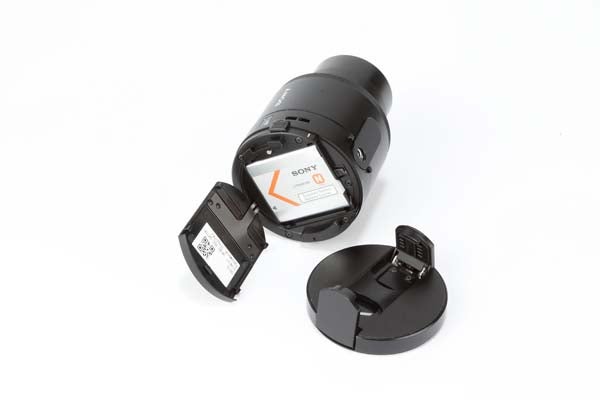 Attach it to a phone and the handling will depend largely on the phone it’s attached to. We tried the Sony Lens Camera QX100 with a naked (i.e. case-free) Sony Xperia Z. The 176g weight of the QX100 made the bundle pretty awkward to hold, with a clear front-heavy weight imbalance. However, get a solid case on your phone and we imagine handling will be much improved.

Once you’re hooked up to your phone, you can control pretty much everything from the phone’s touchscreen, including exposure compensation, zoom and the shutter. However, the version of the app that we saw had comparatively few options on show. 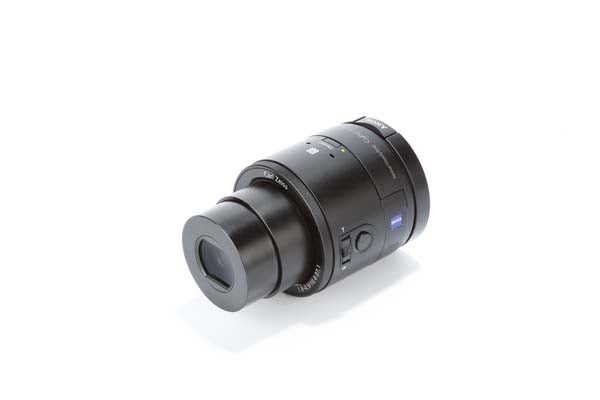 You can choose between two types of auto mode, and a couple of others including aperture priority, but there was no HDR, no panorama and no integrated creative filters. Any processing will have to be done post-shoot. Next to something like the Samsung Galaxy Camera, the Lens Camera feels a little simplistic in terms of what it can do.

However, the QX100 wins back some points with its pure photo spec cred. It has a lens and sensor very similar to the RX100, one of the best sub-£500 compacts. We do not believe it has the updated sensor of the RX100 II, though.

Its sensor is a 1-inch 20.2-megapixel model (rather than the BSI RX100 II sensor). The lens too has specs just-about identical to the RX100, with aperture of f1.8-4.5. It also has optical image stabilisation, missing from the vast majority of phone cameras. 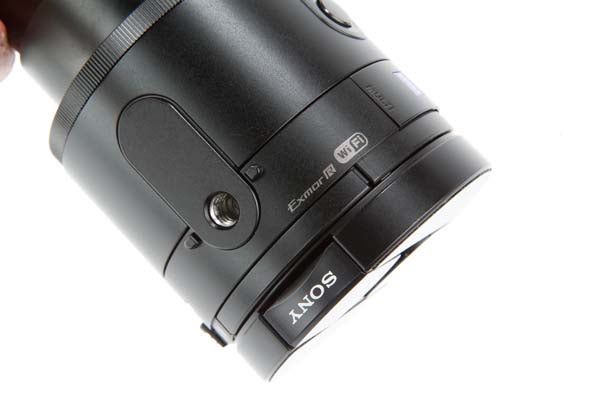 We didn’t get to closely analyse the photos we took with the Sony Lens Camera QX100. That’ll come in our full review. However, its specs suggest it’ll be able to produce some seriously good photos, well in advance of what you can produce with any current phone camera, including the Nokia Lumia 1020.

What could trip up the Sony QX100 is the impression of shutter and/or focusing lag caused by having to transmit the shutter command over Wi-Fi to the camera unit. However, in our testing this was not a particularly noticeable problem. We’ll be back with more impressions in our full review.

Early Verdict: an interesting experiment but it needs time

The Sony Cyber-Shot DSC-QX100 is an odd camera, and it takes a bit of getting used to – clamping a chunky 180g weight on your phone feels plain weird. However, it has the specs to suggest it’ll take cracking photos. Will it convert photographers by the million? No, but it’s an interesting design experiment we’d like to spend some more time with.