The Sony Cyber-shot RX100 is the company’s first pocket-sized advanced compact, and comes with a rich feature set that includes a larger than average 20.3MP sensor; a high quality 3.6x Zeiss optical zoom with a fast f/1.8  maximum aperture; full manual control and the ability to shoot Raw images; a range of built-in digital filter effects and, last but not least, the ability to record 1080p Full HD movies. 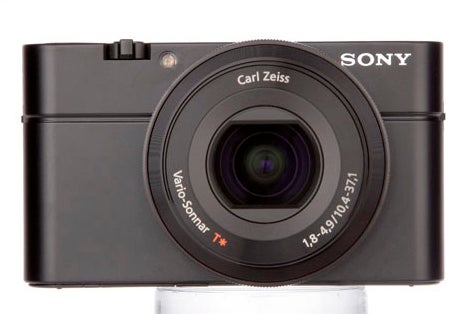 This puts it into the same advanced compact territory as the Panasonic Lumix LX5, Olympus XZ-1, Canon S100, Nikon P7100 and Fujifilm X10. However, whereas all of those cameras (bar the X10) use 1/1.7in and 1/1.63in sensors (2/3in in the case of the X10), the Sony RX100 gets an all-new 1in CMOS sensor with a 3:2 aspect ratio – the same size as found in Nikon’s J1 and V1 compact system cameras. Being of the Exmor variety it is also backside-wired for improved low-light performance.

The long and short of this is that the RX100’s sensor offers 4x the surface area of a typical 1/2.3in sensor found in the vast majority of compacts. And whereas previously the Fuji X10’s 2/3in sensor was the biggest of all the advanced compacts, the RX100’s is twice the size. Even with its impressive effective resolution of 20.3MP, the individual photosites on the new sensor remain 4x larger than those of its main rivals, which in turn should allow for enhanced performance in low light. Correspondingly, Sony have had the confidence to give the RX100 a standard sensitivity range of ISO 80 – 6400, which can be further extended up to ISO 25,600.

The RX100 is fitted with a 3.6x optical zoom from Carl Zeiss that offers the 35mm focal range equivalent of 28-100mm and which benefits from Zeiss T* coating to reduce reflections. Maximum aperture at 28mm is a usefully quick f/1.8, rising incrementally to f/4.9 at 100mm. While the Panasonic Lumix LX5 is slightly wider at 24mm, the RX100’s 28mm is otherwise very much in keeping with the rest of the competition and still offers a generous field of view. In addition, the RX100 also benefits from Sony’s own Optical SteadyShot image stabilisation technology for sharper still images at slower shutter speeds. This is further complemented by an Active Mode for video recording. 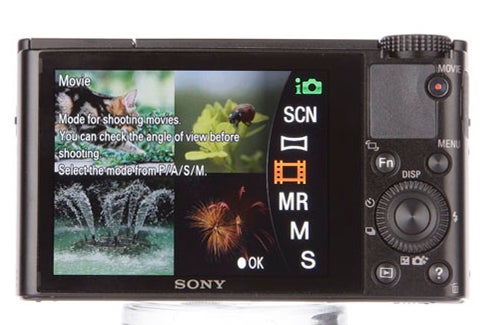 On the back of the camera you’ll find a 3in display with a 1229k-dot VGA display. This now uses Sony’s own WhiteMagic and TruBlack technology to increase overall brightness and ensure blacks are black, all while reducing power consumption by 35%. It’s a very rewarding screen to use with excellent sharpness and colour, which is fortunate because – unlike the Olympus XZ-1 and Panasonic LX – the RX100 doesn’t sport any kind of hotshoe or accessory port with which to connect an electronic viewfinder.

Overall construction is very good with the RX100 finished in smooth aluminium, for a sleek modern appearance. There’s also a reassuring weightiness to it. While the camera lacks a proper finger grip, there is a fairly pronounced thumb rest on the back of the camera. In keeping with Sony’s NEX range of compact system cameras, physical buttons are kept to a minimum, making the whole package only slightly larger than the Canon PowerShot SX100, and noticeably smaller than both the Fujifilm X10 and PowerShot G12. It’s the kind of camera that will easily fit inside a jacket or trouser pocket. Available as a optional extra there’s also a rather cool retro leather case for it. 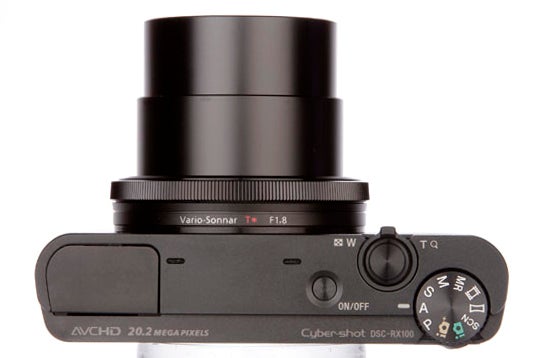 In terms of shooting modes the RX100 offers the full quartet of Program, Aperture-priority, Shutter-priority and Manual modes (PASM), alongside a host of fully automatic modes for point-and-shoot control. Movie recording options are well represented too with the ability to shoot high definition videos at a top setting of 1920 x 1080p Full HD at 50fps in the HDTV-friendly AVCHD format. Alternatively, you can opt to record in the more computer-friendly MP4 format, with a top quality setting of 1080p Full HD at 25fps. Sound is recorded in stereo via two microphones on the camera body although there’s also a stereo microphone input should you want to enhance sound recording quality.

Given the relative lack of physical buttons on the back and top of the camera body, the control ring that runs around the base of the lens is a useful addition that helps to make the camera much more enjoyable to use. Used in tandem with the Function (Fn) button on the back of the camera the ring can be used to control things like aperture and shutter speed. In addition there are up to 17 other camera settings you can assign to it; simply assign what you want to control with the Fn button and then rotate the ring. 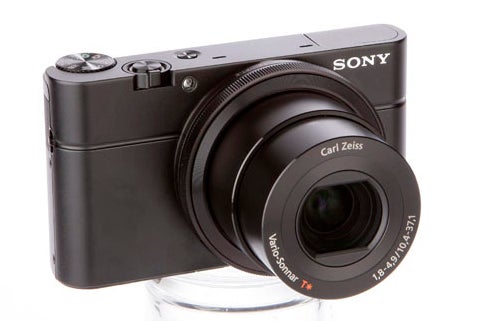 The ring itself offers a smooth action that doesn’t require too much effort to turn, with audible clicks notifying you of each step adjustment change – unless you are capturing video, in which case it’ll remain silent. Features available through the four-way Directional-pad can also be customised via the main menu, giving you plenty of scope to set the RX100 up as you like.

The in-camera menu system will look instantly familiar to anyone who’s previously used a Sony Alpha DSLR/SLT, with the appearance and layout being very similar. The menu itself is broken down into seven sub-menus that, combined, provide a great deal of control over the camera that enthusiasts and advanced users will doubtless appreciate.

The RX100’s contrast-detect autofocus system offers a range of AF modes to choose from, including a wide-area Flexible Spot, AF tracking and Face Detection. In addition, there’s also a useful Peaking MF assist mode, which highlights areas that are in focus on the rear monitor. We particularly like the Flexible spot setting as this allows you to position the AF area pretty much wherever you like, with only the extreme edges and corners out of bounds. Unless you assign AF point selection mode to the Fn button you will need to open up the main in-camera menu to toggle between the various AF settings which is a bit long-winded. 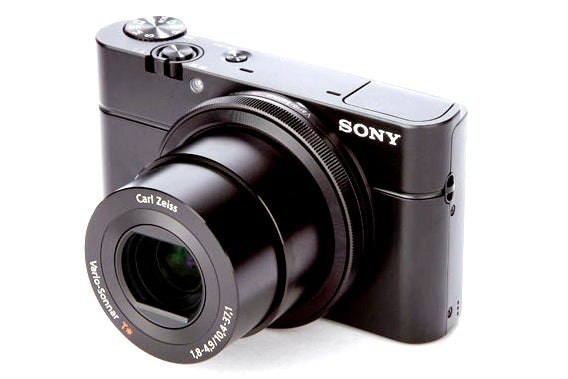 Autofocus performance is very fast in single-point AF, especially in good light and only dropping fractionally in less that optimal conditions. The automatic AF tracking option is one of the better examples we’ve yet seen on a compact, although it can struggle when its subject is moving too fast or erratically. Set the RX100 into Speed priority mode and you’ll be able to fire of 10 shots in very quick succession over a period of a second at full resolution, though for a more prolonged burst over a longer period, the frame rate reduces to 2.5fps.

Overall image quality is very good. Used in multi-segment metering mode exposure is generally very accurate, with only the odd underexposure. To counter this, we simply dialled in around 0.3-0.7EV using the exposure compensation tool. Should you want to create HDR-like images then the built-in Auto HDR feature should prove very useful. In total there are six different modes along with an automatic option. The camera will then take three consecutive images at different exposures for you and automatically combine them into a single image with a broader dynamic range.

If you want to avoid the HDR look but still want to produce images with more detail in the shadow and highlight areas then Sony’s D-Range Optimizer is another useful tool you can call upon. You can opt between five strength levels or just select Auto and let the camera decide for you. 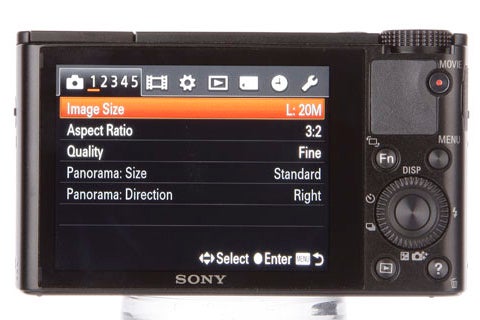 The RX100 offers a range of of Creative Style JPEG processing options and these can be used to determine how saturated the colours in your images are as well as the Brightness, Contrast and Sharpness levels. The five preset options include: Standard, Vivid, Portrait, Landscape, Sunset and Black & White.

The all-new 1in 20.2MP sensor is able to resolve class-leading levels of detail – at least for a camera of this class. if you’re after images with even greater detail from a compact, then the only thing to really beat it is the Fujifilm X100 or Canon PowerShot G1X.

The 28-100mm is sharp through the range, with both vignetting and barrel distortion kept well under control. While we’d have like to have seen a slightly faster maximum aperture than f/4.9 at the long end, the ability to shoot wide-open at f/1.8 at 28mm means shallow depth-of-field shots are possible. 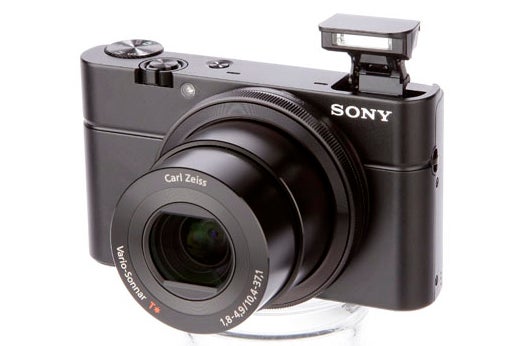 White balance is very reliable, with the Auto White Balance (AWB) setting delivering consistently neutral results. Should you need to though, you can force the camera to shot at a particular colour temperature with the usual list of presets available: Daylight, Shade, Cloudy, Incandescent, Fluorescent (x4) Flash, Colour Temp/Filter and Custom.

ISO performance also impressed us. Under ISO 800 and images are sharp and show plenty of detail. Above ISO 800 and image noise does start to become increasingly noticeable, although for a compact this is still pretty impressive. Even at the highest standard setting of ISO 6400, images are still passable.

Verdict
The Sony Cyber-shot RX100 is an excellent advanced compact that offers a near perfect blend of size, performance and image quality. At over £500 though the RX100 doesn’t come cheap, putting it into the same kind of price bracket as many CSCs and even some entry-level DSLRs. Clearly the RX100 is a different kind of camera altogether that is designed to appeal to a different kind of user with a different set of needs, however if portability isn’t your number one priority then this is certainly something to think about. If not and you’re looking for a premium advanced compact, then the RX100 certainly fits the bill. 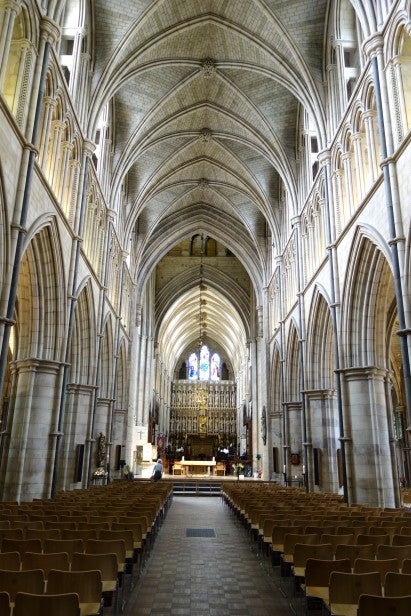 The ISO test image in full. Below are 100% crops taken from the same scene at different ISO settings. 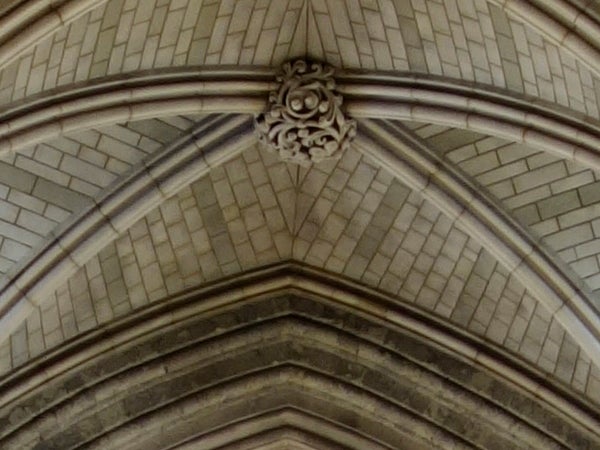 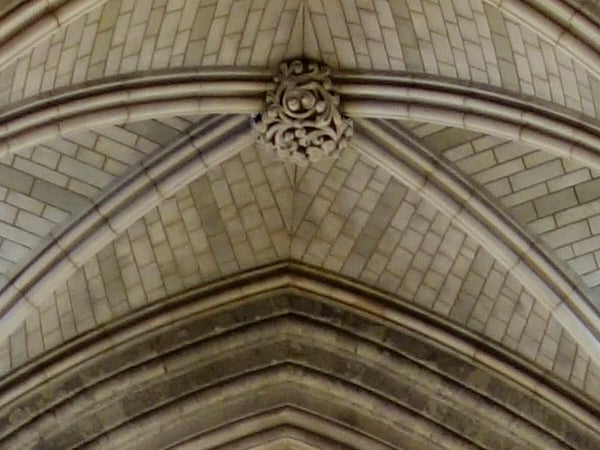 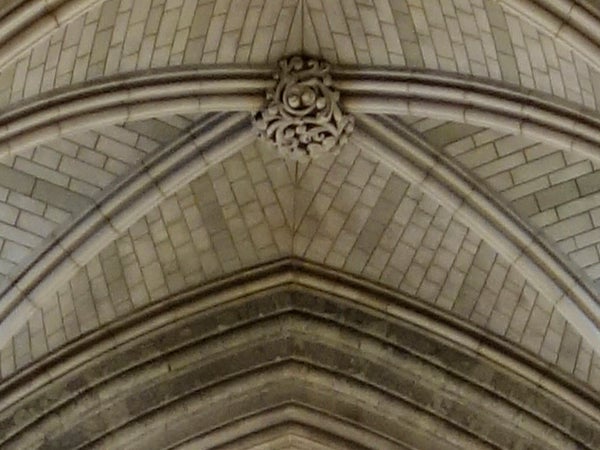 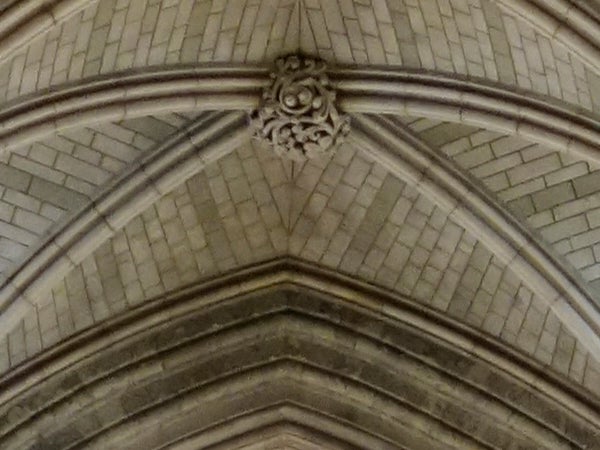 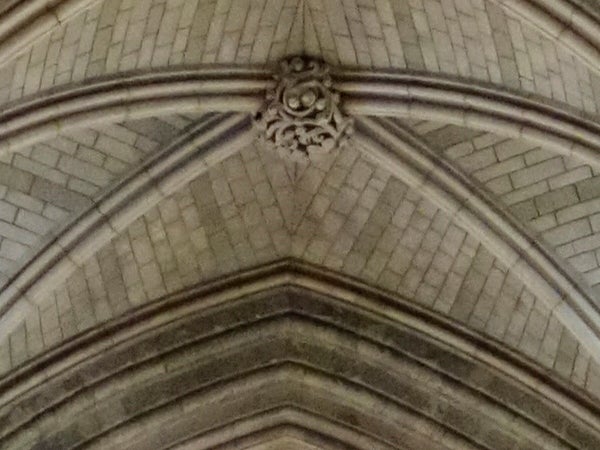 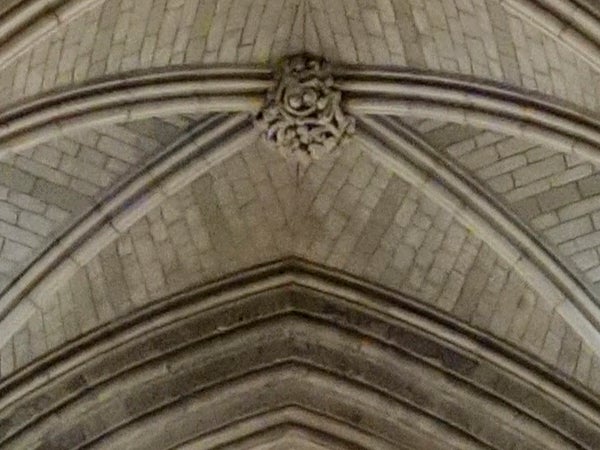 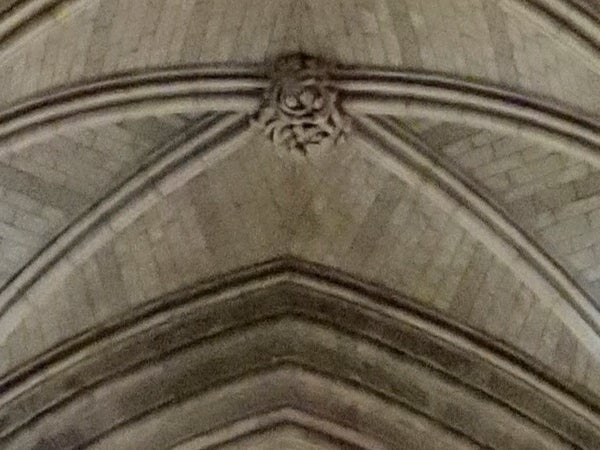 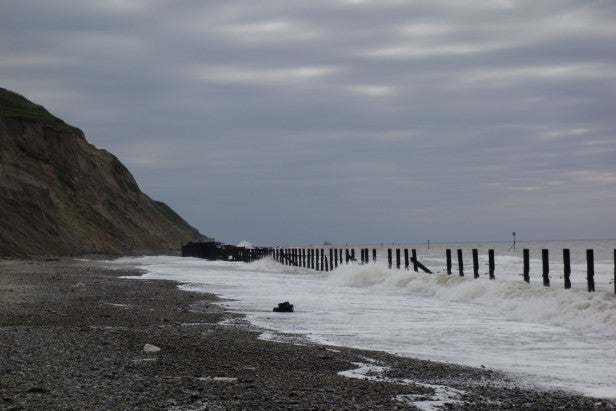 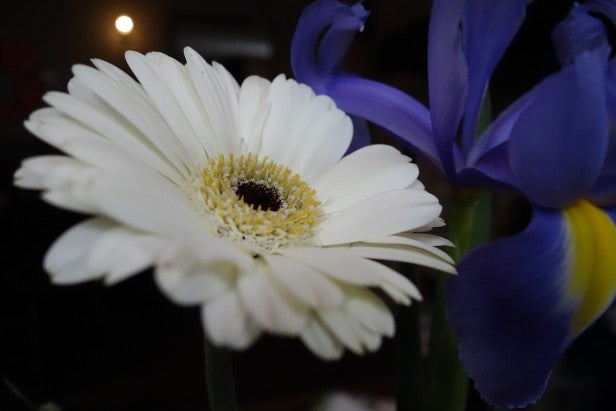 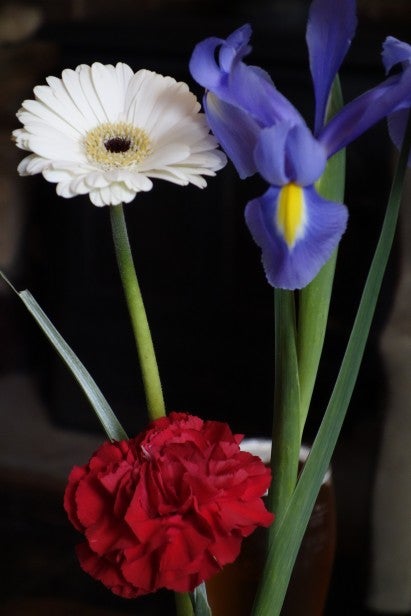 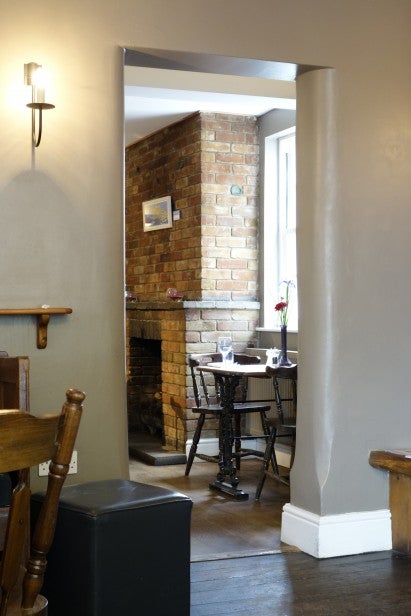 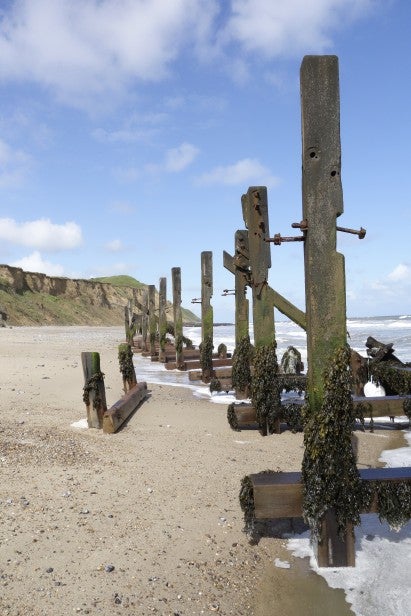