Canon has expanded its PowerShot line at CES 2013, with the 12.1-megapixel Canon PowerShot N unveiled as an ultra-compact snapper that features a new, unusually boxy design that is a combination of enjoyable and frustrating to use in equal measures.

Switching up conventional controls between an increasingly popular touchscreen and the rather unusual pairing of lens-mounted rings, one for zoom, one for the shutter, the Wi-Fi capable Canon PowerShot N is, on first impressions at least, a device that is designed for the Facebook ages, quick, quirky and extremely compact. 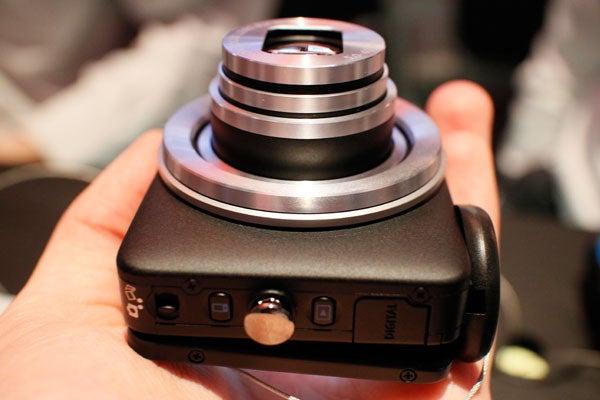 As mentioned, the Canon PowerShot N design is a step away from the norm with the ring based zoom and shutter controls meaning the compact camera can be used no matter which way up you’re holding it. What’s more, thanks to its lack of a rigidly located single shutter button, the camera is as equally friendly to left-handed users as it is righties.

Unusual on most fronts, with a 78.6mm x 60.2mm form factor, which is a relatively slim 29.3mm thick, the Canon PowerShot N rocks an almost square shape.

A muddled device that excites at first but leaves a lot to the imagination following use, the 12.1-megapixel latest addition to the PowerShot line can be fiddly to use with its ultra-compact form and highly sensitive touchscreen display meaning accidental presses and unwanted snaps or floors and ceilings were an all too frequent occurrence, evening during our brief time with the camera.

That said, although the front mounted ring-based zoom and shutter controls are far from standard, they work well and with little confusion as to which of the identically coloured and similarly sized rings you should be using, assuming you manage to avoid a touchscreen triggered premature snap that is. 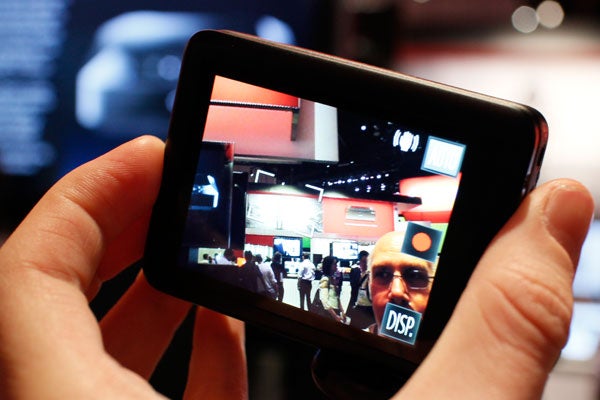 Playing host to a 2.8-inch capacitive touchscreen LCD panel that is further enhanced by a pull-out tilt mechanism and touch based shutter capabilities, the Canon PowerShot N screen, although impressive on paper, fails to live up to initial expectations.

Although the display’s hinge is useful for awkward shots, and of a sufficiently satisfying build quality, the Canon PowerShot N screen is, in large, a disappointingly low quality affair with grainy image playback spoiling one of the most enjoyable aspects of a modern digital camera, viewing your pictures.

Whilst this is not such an issue when utilising the screen as a live, LCD based viewfinder, when attempting to view recently captured shots, the Canon PowerShot N screen is a considerable let down and one which wholeheartedly inhibits the overall end user experience. 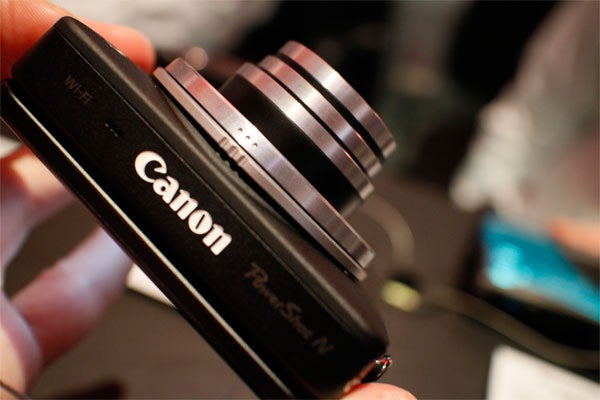 Although we have been unable to fully explore the photographic capabilities of the Canon PowerShot N, stay tuned for the full Canon PowerShot N review in the near future, first-impressions from our hands-on with the device are not wholly positive.

As far as we could tell on the snapper’s less than ideal display, some of the Canon PowerShot N captured shots were lacking in strong colour management with the compact unable to correctly balance what were in truth fairly challenging lighting conditions. Whilst this could be down solely to the image review options available to us, we would expect better from the camera’s 12.1-megapixel High Sensitivity CMOS sensor.

Further compounding the camera’s less than lustrous first-impression, attempting to make use of the 28mm wide angle lens’ 8x optical zoom saw results diminish rapidly with distinct graining and reduced quality apparent almost instantly. Unfortunately, due to the limitations of our hands-on, were have as yet been able to test the camera’s integrated Wi-Fi capabilities.

A more in-depth analysis of the Canon PowerShot N’s photo credentials will be offered up in the coming months when we once again get our mitts on the device around the April Canon PowerShot N UK release date that will see the sub-sized snapper touch down alongside a £269 price tag.

What do you make of the somewhat peculiar Canon PowerShot N form factor and design features? Revolutionary hit or muddled miss? Let us know via the Trusted Reviews Twitter and Facebook feeds or through the comment boxes below.