The Sharp HT-SBW800 is the latest flagship soundbar to join the company’s Home Theatre range.

It supports immersive Dolby Atmos, which is achieved using a 5.1.2-channel configuration composed of upwards- and sideways-firing speakers, a wireless subwoofer, and a total of 570W of power.

Aside from its headline support for Dolby’s object-based audio format, the HT-SBW800 is fairly limited in terms of it features. Sharp has clearly decided to concentrate on design and performance rather than bells and whistles, thus helping to keep the price down.

The Sharp HT-SBW800 boasts sleek styling and a matte black finish that keeps the appearance elegant but unassuming. There’s a wrap-around metal grille hiding the forward- and upward-firing drivers, along with side-firing drivers at either end that are finished in an eye-catching silver. 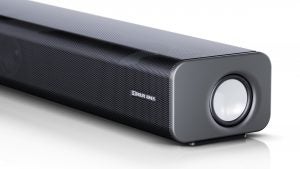 The soundbar is fairly wide, making it ideal for larger screen sizes of 65-inches, and it’s extremely well-made for the price. The SBW800 is fairly tall at 10.5cm, so bear that in mind if you’re mounting in front of your TV. There’s also the option of wall-mounting using the included brackets.

There are some basic controls on the top surface for power, source and volume up/down. In a nice change from the usual array of lights, Sharp has also included a proper display that actually shows useful information like selected source, volume, audio format and sound mode. 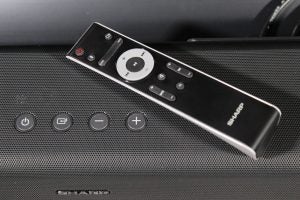 In a recessed area at the rear you’ll find two HDMI inputs and an HDMI output with ARC and CEC. These support 4K and HDR, including Dolby Vision, while the inclusion of ARC allows audio to be sent back from a compatible TV (including Dolby Atmos from supporting apps).

There are also coaxial and optical digital inputs, a 3.5mm auxiliary input, and a USB port. You can wirelessly stream music using Bluetooth 4.2, but there’s no Wi-Fi. The included remote control is comfortable to hold and intuitive to use, with all the buttons sensibly laid out. 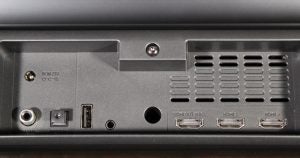 The subwoofer sits on large rubber feet, and sports a downward-firing driver with a bass port for more low-end effect. The overall design mirrors that of the soundbar, and the two should pair automatically when you first set them up. If not, there’s a pairing button at the rear of the sub.

The Sharp HT-SBW800 includes Dolby Atmos decoding, which is its main feature. More importantly, it delivers this immersive audio experience by using upward-firing drivers to create overhead channels, rather than relying on less effective psychoacoustic processing.

In total there are seven speakers and a subwoofer in a 5.1.2-channel layout. The speakers are composed of three facing forwards, two firing upwards, and two at the sides to give the soundstage greater width. There’s a total of 570W of amplification to drive the entire system.

The upward-firing drivers literally bounce sounds off your ceiling to create the overhead effects – so the lower and flatter it is, the more believable the effect. The included wireless subwoofer generates low frequencies down to a fairly deep 40Hz.

The SBW800 can handle any flavour of Dolby and also decodes DTS, but doesn’t support the more immersive DTS:X. In terms of other features, the Sharp also includes a number of Dolby sound enhancements and four sound modes.

The Sharp HT-SBW800 is simple to setup – simply place the soundbar in front of your TV and choose between stand or wall mounting. Make sure nothing is blocking the upward-firing speakers at the top or the drivers at the sides, and locate the sub at the front of the room, while remembering that although it’s wireless you still need to plug it in.

This soundbar delivers an enjoyably expansive soundstage that extends above and either side of your TV. This increased sense of width makes it ideal for bigger screen sizes, while the addition of plenty of amplifier grunt and a separate subwoofer allows this system to give your TV audio a serious kick in the pants. If you’ve got a large screen, you really need epic sound to complement it. 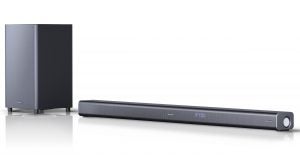 The soundbar’s width means there’s plenty of separation between the front left and right speakers, resulting in some excellent stereo imaging. This makes the SBW800 a great performer with music, with the drivers retaining a clean mid-range and clear treble at the high-end. The inclusion of a dedicated centre speaker also ensures that dialogue remains clear and focused.

The addition of a separate wireless subwoofer gives the lower end of the frequency range a serious boost, but thanks to some effective integration, it does this without swamping the rest of soundstage. So in Godzilla: King of the Monsters, even as the titular hero stomps all over various world cities, the rest of the mix is present and correct. The sub gives the battling titans weight and scale by adding a seismic low-end thump, but its delivery is also tight and fast, resulting in music that has a well-timed percussive kick. 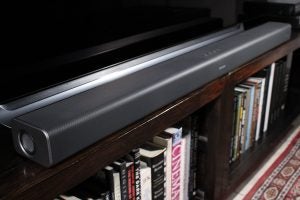 The Dolby Atmos decoding is often impressive, placing effects around the front of the room with an exacting precision. The disembodied voices at the start of Mad Max: Fury Road are particularly effective, floating in a definable three dimensional sound field. The upward-firing drivers certainly work, bouncing sounds off the ceiling and creating the illusion there are speakers above you. Watching the start of Valerian and the City of a Thousand Planets, there’s a palpable thud as massive spaceships break through the atmosphere above your head.

While the overall performance is good, this system is limited due to the lack of actual surround channels. As a result the soundstage is very front heavy, with all the effects being localised in the first third of the room. 1917 uses a highly directional soundtrack to sell the illusion of the film taking place in a single take, but this effect is sometimes lost when sounds are mixed to the rear. This is an inherent limitation of any soundbar that doesn’t have rear speakers but, unlike some manufacturers, Sharp doesn’t offer an upgrade path to add them. 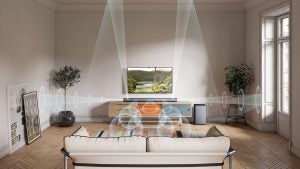 Despite the lack of any rear channels, there is a surround sound mode, accessed via a dedicated button on the remote. This mode redirects audio to the overhead channels, creating a more immersive experience with non-Atmos tracks. However, it can’t put sounds where there aren’t any speakers, instead applying processing that gives the sound a more ‘open’ quality, but still lacks any presence at the rear.

Sharp has included a selection of sound modes, which apply preset equaliser settings that are fairly self explanatory. The Movie mode adds more bass; Music emphasises two-channel; News prioritises the centre channel; and Night compresses the dynamic range. The latter mode is useful for not waking the rest of the household during a late night action-fest. There are also dedicated bass and treble controls for fine-tuning the overall performance.

You should buy the Sharp HT-SBW800 if…

The Sharp HT-SBW800 is designed to deliver a genuine Dolby Atmos experience at an affordable price, producing a great, big soundstage for your favourite films.

This soundbar is nicely designed, well made, and produces an expansive, if rather front-heavy, multichannel experience. It’s also easy to setup, has plenty of connections, includes an intuitive remote control, and boosts an informative display.

You shouldn’t buy the Sharp HT-SBW800 if…

The features are somewhat limited with no DTS:X, built-in Wi-Fi or option to add rear channels. But that is expected given the price.