If you have an Android phone and want the best smartwatch going, the Samsung Galaxy Watch Active 2 is it. Great design, acceptable battery life, solid fitness features and outstanding performance make it the best all-round wearable that Samsung has made – and that makes it better than any Wear OS watch currently available.

The Samsung Galaxy Watch Active 2 is the best smartwatch out there for those who use an Android phone.

Its combination of clever digital bezel, a superb display, and a premium build make it look more watch-like and less like a wrist computer.

With great fitness tracking built-in and the ability to carry out all the useful tasks smartwatches are generally capable of, too, the Watch Active 2 is a fine Android-friendly alternative to the Apple Watch Series 5.

I quite like the Apple Watch design, although some folk aren’t fans of its rectangular look that makes it more like a wrist-based computer. If that’s you, then you’ll be delighted by the traditional design of the Galaxy Watch Active 2.

Its circular display sits in an aluminium case and silicone strap configuration, with a choice of 40mm or 44mm watch sizes costing £269 and £289 respectively. I reviewed the pricier 44mm stainless steel model with a leather strap – but, frankly, it’s an extravagance. I’d recommend opting for one of the cheaper models – you don’t lose any of the functionality by doing so, unless you want 4G LTE, which is exclusive only to some stainless steel models.

The Watch Active 2 sports a simple design, with two buttons and a mic on the right edge and a speaker on the left. On the rear is a heart rate sensor that didn’t prove uncomfortable to wear against my wrist all day. The leather strap of my review model was easy to replace, too, since the watch accepts any standard 20mm strap. 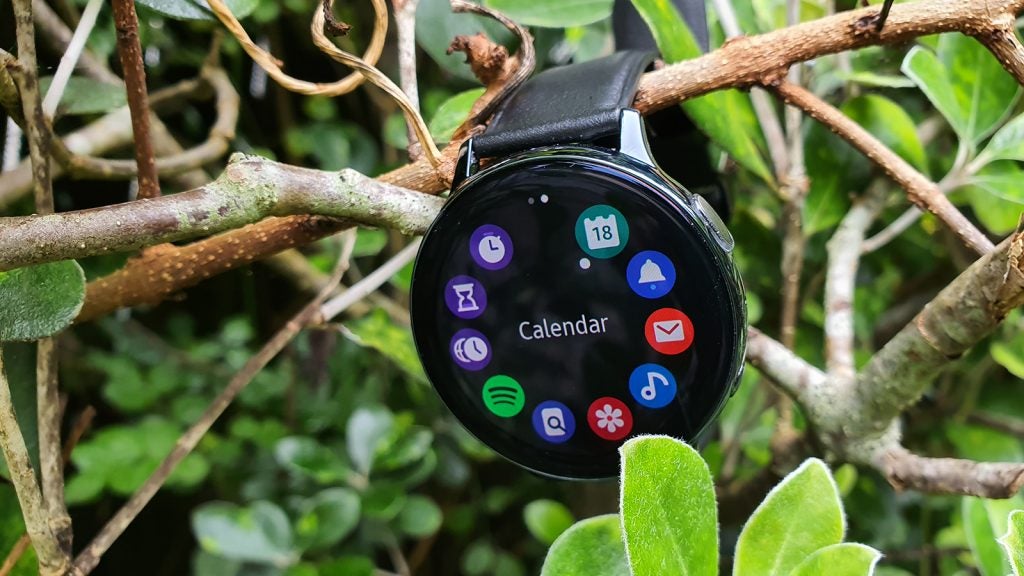 The display on the 44mm model is a 1.4in circular Super AMOLED (it’s 1.3in on the 40mm version) unit and it looks simply stunning, with superb brightness and excellent outdoor visibility. Samsung’s Tizen OS is based around a black background, which not only looks great but saves on battery life, too, since it has fewer bright pixels to display.

A touch-sensitive bezel around the outside of the screen is the Watch Active 2’s party piece, and it works well. On older Galaxy watches there were physical rotating bezels to navigate the OS, and this was oddly dropped from the original Galaxy Watch Active. Its return here as a digital bezel is excellent, equipping the device with one fewer moving part with the potential to break.

It’s very responsive with haptic feedback and a great way to navigate the menus and widgets on which Tizen is based. It also worked without issue in the rain, and also when my hands were sweaty at the gym or on a run.

The Watch Active 2, much like its predecessor, has an always-on display – a feature that has earned the Apple Watch Series 5 many headlines and plaudits. This isn’t a new feature to smartwatches in general; but the Watch Active 2 implements it well, displaying a simplified version of your watch face when on so you can still see the time and other metrics.

In my experience, the battery hit as a result of having the always-on display activated was worth it, and I was still able to get two full days from a single charge. The plethora of excellent, often customisable watch faces means you can truly personalise.

Oddly, the digital touch bezel and always-on display were off by default after setup. While having the display off when idle saves battery, there’s no reason to leave the touch bezel off.

With a name like Galaxy Watch Active 2, you’d be right to expect some decent fitness features – but this isn’t just what this wearable is about. It also carries all the other usual smartwatch functionality.

You can choose which of your phone’s apps send through notifications (having them all on is too much information for me) and you can also view and reply to messages on the watch without hassle – you can type or dictate with ease. Making and receiving calls using the watch’s mic and speaker is possible, too – but, remember: you’ll need the expensive 4G LTE version with a SIM plan if you want to make calls untethered from your phone.

I tested the Watch Active 2 with a Galaxy Note 10 Plus, but it also works with any modern Android phone. It’s compatible with iPhones, too, but you lose the email and text messaging apps. You’ll still receive notifications from iMessage and other messaging apps if you turn on notifications for them in the Samsung Galaxy Wearable app, however.

On the fitness front the watch packs in a heart rate sensor and GPS, which are the building blocks of any activity tracking wearable. It means the Watch Active 2 can track outdoor runs and cycle routes without requiring a phone, and provide data-rich feedback on your workouts.

There’s a built-in running coach that works best when you have wireless headphones connected to the watch, since it provides audio instructions on a wide variety of runs. There are running, cycling, treadmill, exercise bike and swimming options, plus weights too. The tracking carried out by the watch is mostly the same measurements of distance, pace and heart rate – the different activities are for your own categorisation. The data feeds back into the Samsung Health app, which has matured over the years to a solid platform on which to log activity. I use it to view workout metrics and my sleep patterns when wearing the watch to bed. You can also delve deeper, however, adding water and food consumption for instance.

Sleep tracking is fairly accurate with the Watch Active 2, and is based on movement and heart rate. If you want to use this functionality then you’ll have to find time during the day to charge the watch, considering the most I ever managed was about two and a half days of power – and that drops to about two if you’re using GPS and have the always-on display enabled.

Despite the name and the fitness features, I appreciate the ability to pare back the workout notifications and reminders to move to use the Active 2 as a regular smartwatch. It certainly looks the part and can spring into life as a solid activity tracker when needed before fading into the background again.

I found the Active 2 to be lightning-quick on the performance front; it didn’t stutter or need resetting at all during the two weeks it was tested before writing this review. The onboard 750MB RAM is clearly sufficient, but the LTE model has 1.5GB just to be safe.

Paired with a Galaxy Note 10 Plus I also came to appreciate the intelligence of its pairing. When my phone was in Do Not Disturb mode, the watch went into this mode too. You can change this, but I love that I can set a DND schedule on my phone and know that my watch will follow suit.

I downloaded some music files to the phone to test playing files directly to my wireless headphones, but it’s easier to stream Spotify from your handset. The Watch Active 2 comes preloaded with an official Spotify app that acts as a remote and can sync your playlists, but you do need your phone.

Notification triaging was fast and responsive, as was making the occasional call (even if you do get funny looks when talking to your wrist in public – all in the name of reviewing). The touch bezel and screen are easy to use, and once I was used to the OS and its custom widget menus, it quickly became intuitive as to which buttons need pressing during a distracting workout. 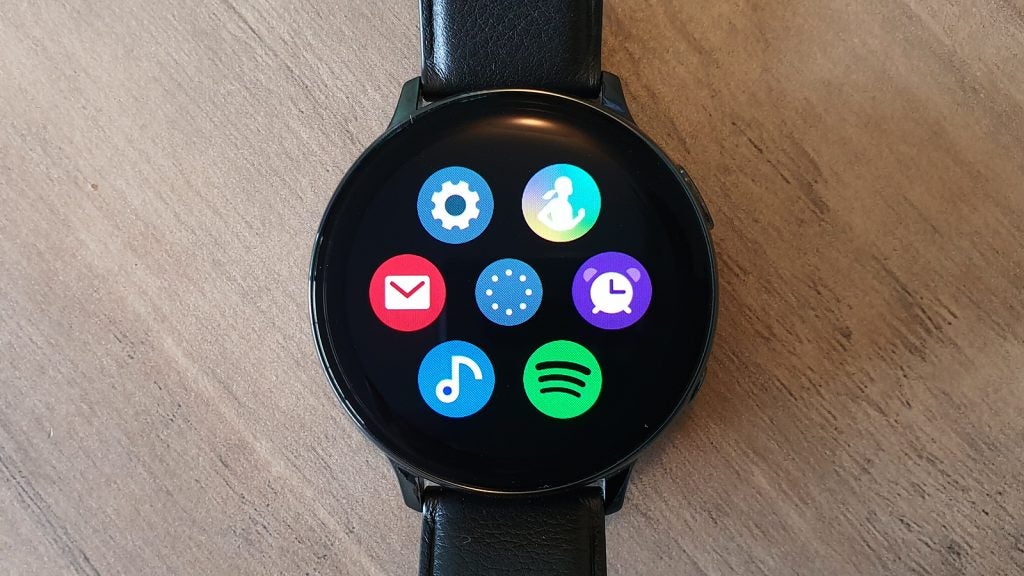 One mark against Tizen OS is the lack of decent third-party apps – Spotify is pretty much it. The Apple Watch has a far larger library, but the core functionality of the Watch Active 2 means I didn’t miss extra app options. Nevertheless, it’s something to consider.

Despite the raise-to-wake function working without fail most times, it was difficult to get working while on a run. Your mileage may vary, but I almost always had to press a button to get the screen to activate in instances that the raising action should have been sufficient.

I can easily call the Watch Active 2 a two-day smartwatch, even with the always-on display turned on and GPS activated on both those days for outdoor runs. I managed three days with both functions turned off – but you have to actually use the features on a smartwatch to get the most out of it!

This makes the battery life on a par with the Apple Watch Series 5, but lagging behind impressive two-week smartwatches such as the Huawei Watch GT 2. But I’d still recommend the Watch Active 2 for its excellent performance and full feature set.

You want a smartwatch to look like a proper watch

The Samsung Galaxy Watch Active 2 looks like a watch and for many that’ll be enough reason to choose this over, say, an Apple Watch.

You want plenty of fitness tech

There’s a lot of good fitness tech packed inside this watch. You’ve GPS, a heart rate monitor and optional 4G.

Samsung uses its own Tizen software for the watch, rather than the more common Wear OS. Still, there’s support for both Android and iPhones.

Is the Galaxy Watch Active 2 waterproof?

Yes, it’s waterproof up to 5ATM

What is the Samsung Galaxy Watch active 2 size?

The Watch Actives 2 comes in 40mm and 44mm sizes

What is the difference between the Samsung Galaxy Watch and Active 2?

The Watch Active 2 is better designed for exercise enthusiasts 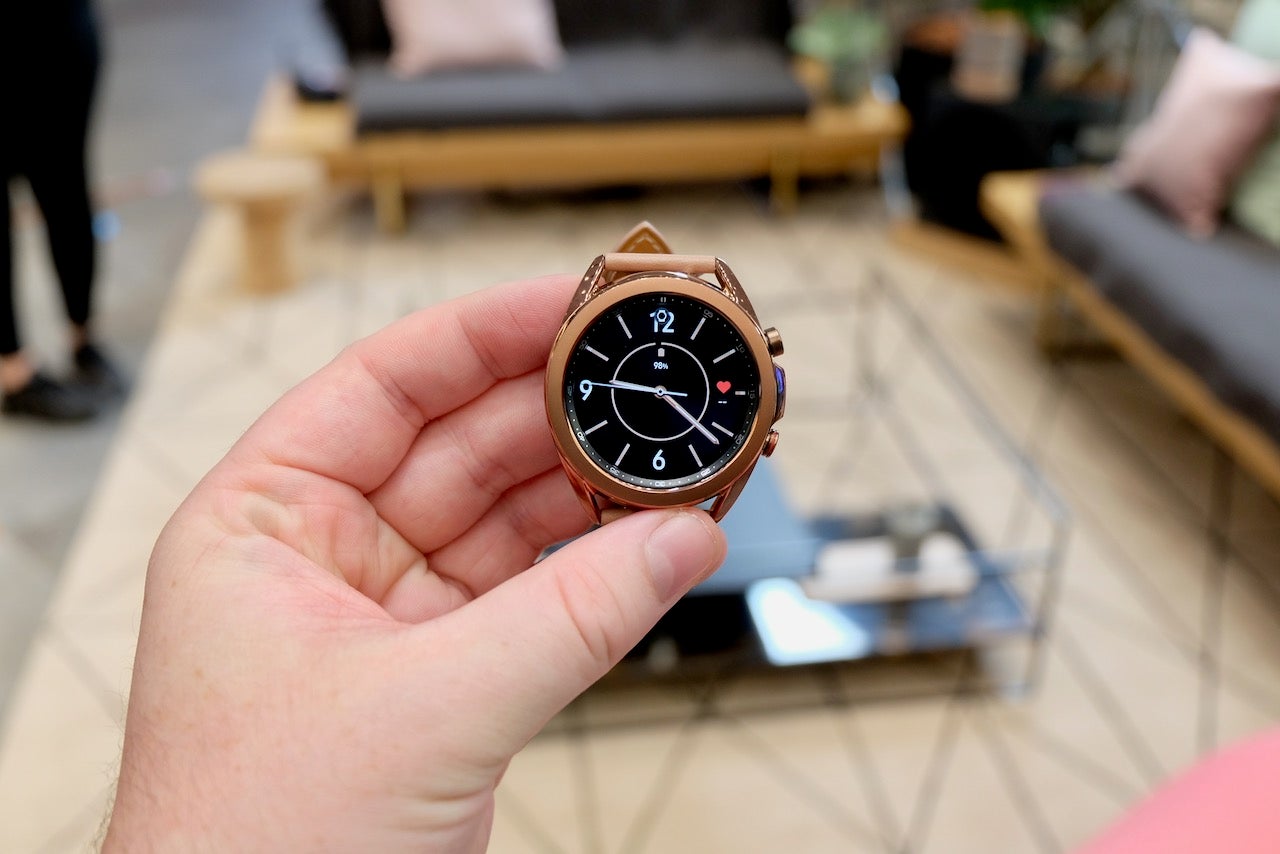 An abbreviation of ‘beats per minute’, used to describe the pace of someone’s heartbeat as recorded by a smartwatch or some other wearable.

Google’s smartwatch platform and the successor to Android Wear. Wear OS is the most popular smartwatch operating system, used by the likes of Mobvoi, Fossil and Skagen.

An operating system developed by Samsung which is used in the company’s smartwatches, amongst other devices.