This isn't an all-singing, all-dancing smartwatch that can act as a supplementary smartphone, but it works well as a fitness tracker and has a premium design that belies its competitive price.

UPDATE: This review has been amended to confirm that the Huawei Watch GT 2 does have the option of enabling an always-on display

What is the Huawei Watch GT 2?

The Huawei Watch GT 2 is the smartwatch sequel to the Huawei Watch GT. It’s main focus is fitness tracking, rather than being the kind of multi-functional device that lets you deal with messages and notifications without using your phone. Its operating system is Huawei’s own-brand Lite OS. The version we reviewed has a 46mm casing, but a 42mm variant is also available.

The Huawei Watch GT 2 has a circular face and two crowns like a traditional watch, in contrast to the round-edged square look of the Apple Watch Series 5 or the Xiaomi Mi Watch. It has a sturdy yet smart construction that complements more formal wear, as well as being suitable for tracking your exercise in the gym. This makes it more fashionable than many dedicated fitness trackers at the same price point.

There are 14 different watch face designs to choose from to personalise your device, ranging from the minimalist to those packed with complications.

The AMOLED screen measures 1.4in, with a pixel density of 462ppi. It’s a nice sharp screen, displaying strong colours  and decent level of brightness. In order to save battery life, it’s not set to “always-on” by default. Fortunately, you can change this by simply navigating through the settings as follows: Settings > Display > Advanced > Standby Watchface. It’s up to you whether the battery advantages offset the inconvenience of a watch that’s not always readable. 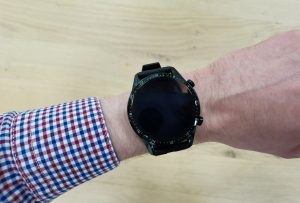 The flip-side to having a screen that reverts to standby is the incredible battery life. Huawei claims the Watch GT 2 will last up to two weeks on a single charge, an astonishing boast that was borne out by our testing.

Performance proved snappy, and using the physical interface is problem-free. The watch has two crowns on the side of the face, one of which brings up the main menu and the other the exercise menu by default; the latter can be remapped as a shortcut to a different function. 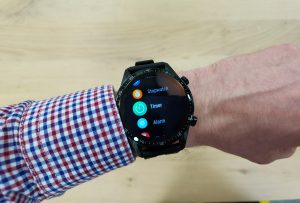 The rest of the activity is accessed via touchscreen interaction. Purists might fear that sweaty fingers might result in operational issues after an intensive workout, but I experienced no problems.

The interface is easy to navigate, but if you’re looking for the full smartwatch experience then it’s likely to come up short. You can receive phone call notifications on your phone, which is useful, and you’ll get a couple of fitness-related notifications through the day (for hitting your step count, or if you need to “get up and move”). However, you can’t respond to messages via the watch. You can use the 4GB capacity for storing music to get you through your workout, though.

The software, based on Huawei’s own Lite OS, doesn’t have an app store – and you can’t download any new apps to the watch; you’re stuck with the pre-installed apps. Fortunately, this covers most bases, such as exercise tracking that covers the full triathlon, as well as practical helping hands such as a stopwatch and flashlight.

Nevertheless, it offers nothing like the versatility of the Apple Watch or even some Wear OS devices.

The Huawei Watch GT 2 can track several different exercises, including the triathlon disciplines of running, swimming and cycling. While wearing the watch for running, I found that the GPS was super-accurate in its distance and pace calculations, which are displayed clearly during the activity. 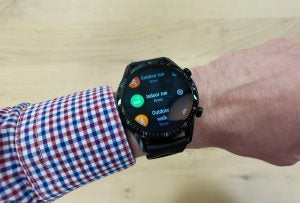 In a feature bound to be divisive, it has a speaker that announces your performance stats aloud during your workout – so every kilometre, a disembodied voice will inform surrounding bystanders of your time and heart rate. Some people will find this more useful than peering down at the watch face, but it made me self-conscious

Another feature I didn’t much care for was the addition of a “virtual runner”, whose performance acts as a pacemaker for you while you’re running – but others may find it to be a useful motivating influence.

On the positive side, the watch did me a favour by alerting me through haptic feedback and an on-screen notification that I was regularly and significantly exceeding my maximum heart rate. I correspondingly moderated my exercise habits to reduce the strain on my heart and improve the speed of my recovery after exercise. 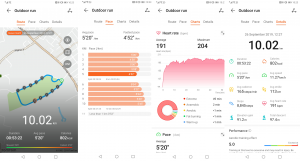 The watch also offers 24/7 heart rate tracking (even whilst swimming, which is a rarity), and the results corresponded with other high-performing smartwatches. It doesn’t offer the electrocardiogram facility that is now even offered by the Withings Move ECG in the same price bracket.

Sleep tracking – still shockingly not natively supported by the Apple Watch Series 5 – is present on the Huawei Watch GT 2, and I generally found this feature to be accurate. It can even reliably identify the non-continuous patterns of sleep that can elude other wearables; but on one occasion it incorrectly defined a particularly relaxing “al desko” lunch break as a nap.

Unlike some watches that are completely reliant on their complementary app, you can browse through many of your fitness indicators on the watch itself without needing to get out your phone, which is handy. The phone app itself, Huawei Health, has a very clear and informative interface that should satisfy amateur athletes as well as nervous newbies.

Should you buy the Huawei Watch GT 2?

If you’re looking for a smartly designed watch with robust fitness features, then this is a good option for a good price. But if you want the added convenience of a true smartwatch that will allow you to deal with admin on the go, then there are several watches better-suited to your requirements.

This isn’t an all-singing, all-dancing smartwatch that can act as a supplementary smartphone, but it works well as a fitness tracker and has a premium design that belies its competitive price.